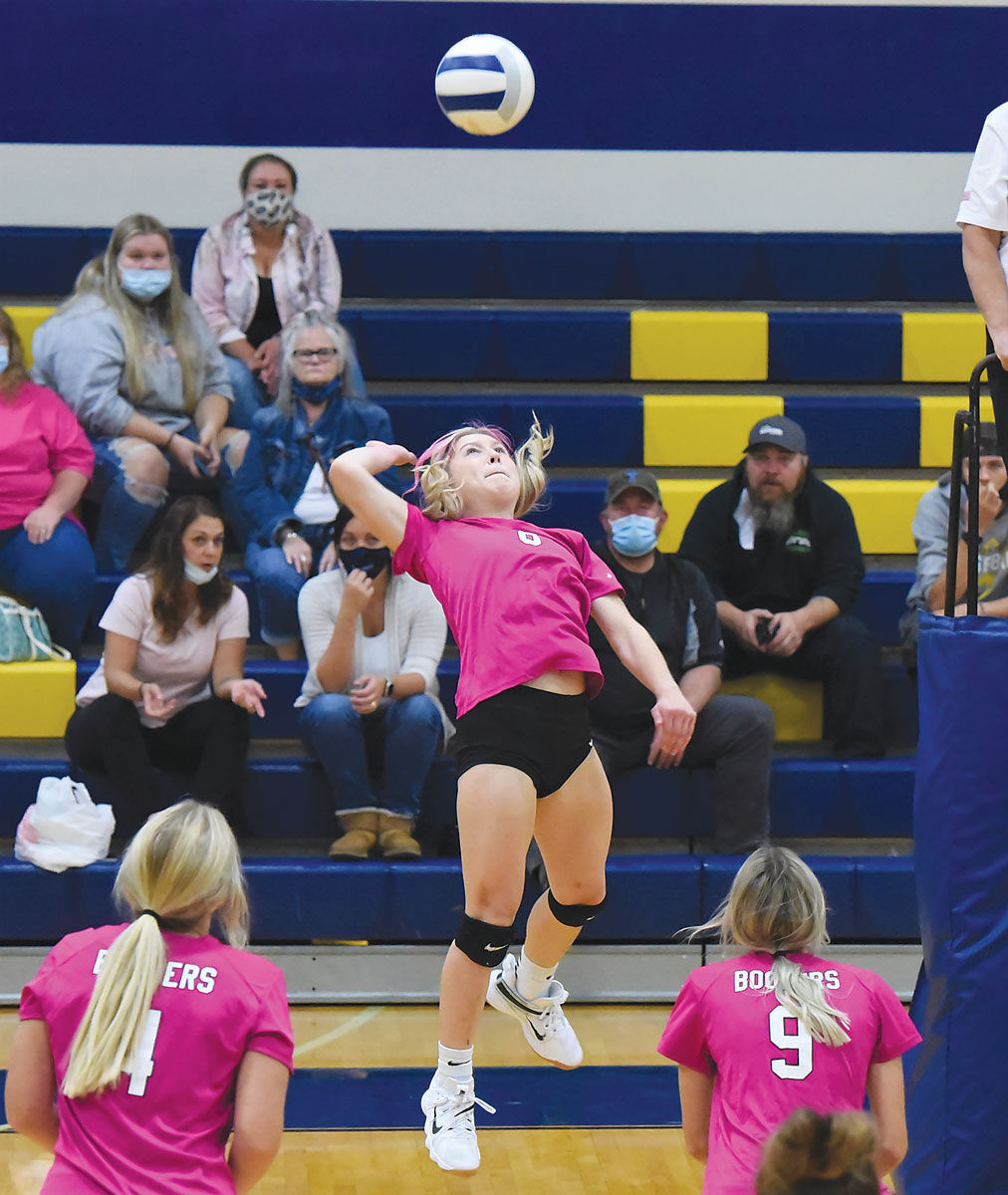 Toledo High School senior setter/outside hitter Klaira Flatt prepares to send a kill attempt across the net Oct. 6 during the Boomers’ three-set sweep of Waldport in a 2A-4 Sunset Conference match in Toledo. (Photo by Michael Heinbach) 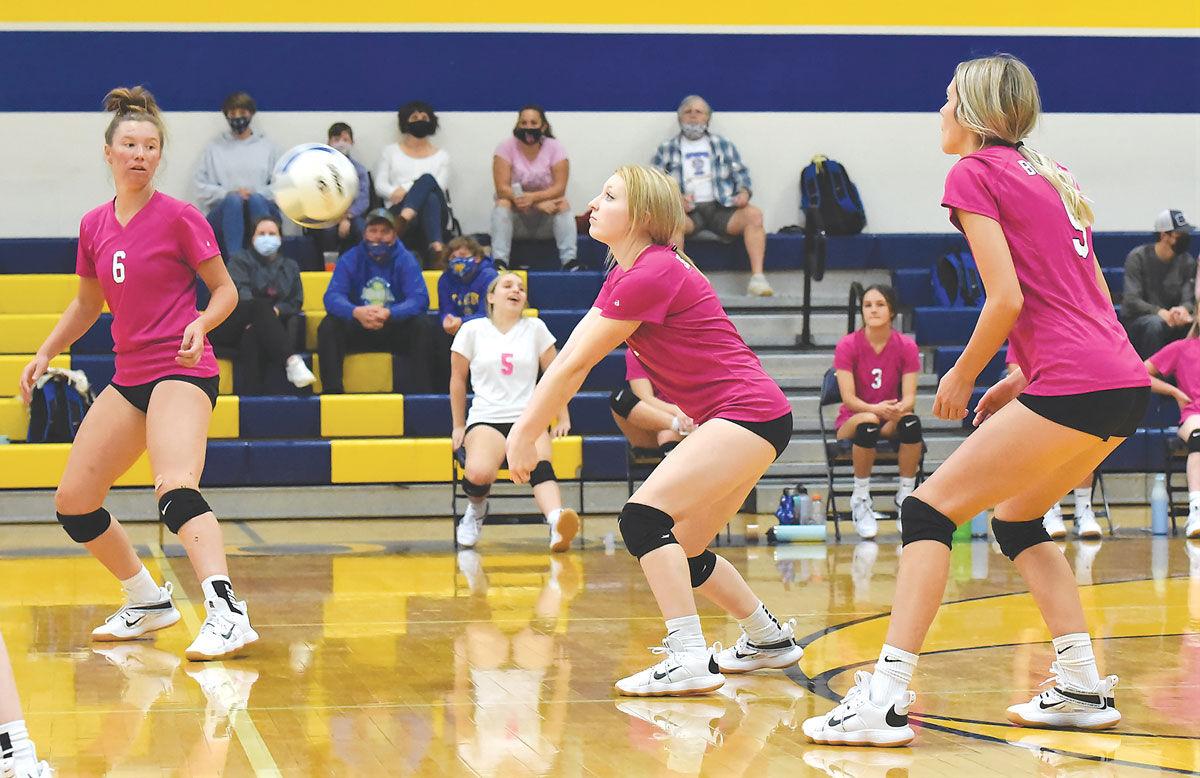 Kendall Smith, Toledo junior defensive specialist, receives a serve Oct. 6 during the Boomers’ 25-16, 25-20, 25-17 defeat of Waldport in a 2A-4 Sunset Conference match in Toledo (Photo by Michael Heinbach)

Toledo High School senior setter/outside hitter Klaira Flatt prepares to send a kill attempt across the net Oct. 6 during the Boomers’ three-set sweep of Waldport in a 2A-4 Sunset Conference match in Toledo. (Photo by Michael Heinbach)

Kendall Smith, Toledo junior defensive specialist, receives a serve Oct. 6 during the Boomers’ 25-16, 25-20, 25-17 defeat of Waldport in a 2A-4 Sunset Conference match in Toledo (Photo by Michael Heinbach)

TOLEDO — Returning to the volleyball court for the first time since establishing themselves as the 2A-4 Sunset Conference team to beat, the surging Toledo Boomers didn’t play their best match of the season Oct. 6 in a 25-16, 25-20, 25-17 league sweep of Waldport. Regardless, Toledo head coach Crystal Taylor Hinds thinks her team is primed for the regular season’s stretch run.

The Boomers hadn’t seen the court since assuming first place in the league standings with a dramatic five-set defeat Sept. 30 at home of Reedsport, and it might have been easy for them to overlook the Irish. They traveled to Toledo without a league win to their name. After beating Waldport, Taylor Hinds said the Boomers’ intra-county opponent provides a unique challenge.

“Waldport has always been a rival in our girls’ eyes, so that’s why I think sometimes we have trouble when we’re playing against them,” Taylor Hinds said after the Boomers won their fourth straight match to move to 6-2 in league, 8-5 overall. “They are a good team, and any team in this league can beat you on any given night. But I think our girls focus more on the rivalry than anything else when we’re playing Waldport."

Irish first-year head coach Jeff Lee saw a handful of encouraging signs from his team despite it falling to 0-5 in league matches.

“I was really happy with the night,” Lee said. “We have some weaknesses, but our serving and our serve-receive aren’t weak. We’ll keep working.”

But Taylor Hinds says it’s no coincidence Toledo has played its best volleyball of the season since the return of senior setter/outside hitter Klaira Flatt.

“It was difficult when we didn’t have her for that week,” Taylor Hinds said. “You can just tell, on the court she is a force. No matter if she’s on the court or off, she’s talking all the time and leading. She’s a pretty special kid, and we’re lucky to have someone like that who can be that glue to our team.”

The Boomers are slated for a busy end of this week. On Thursday, they travel to Myrtle Point to meet Bandon at 3:30 p.m. and Myrtle Point at 6:30 p.m. The next day, Toledo hosts Coquille at 3 p.m. before facing Dayton at 1 p.m. and Rainier at 3 p.m. Saturday at Dayton High School.

Last Saturday, Waldport played three, best-of-three set matches at a tournament in Oakridge, where the Irish lost to Lowell and La Pine in two games, but earned a three-set victory over Triangle Lake. In a text message to News-Times staff, Lee praised the serving of Cayden Ritchey and Airyanna Paden, as well as the backrow play of Smith and Pankey at Oakridge.

The Irish (2-9 overall) began this week with a Monday match at Coquille before hosting two matches at home Tuesday against Reedsport. They play Thursday night at Gold Beach before hosting Coquille at 6:15 p.m. Saturday.