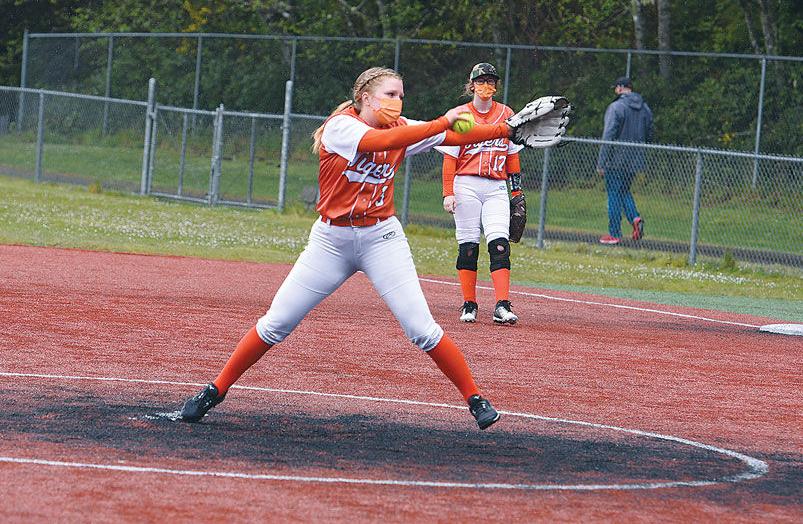 Sophomore Lily Hatton pitches Saturday, April 24, during the opening game of a doubleheader sweep of Willamina in Lincoln City. Taft won the first game 16-6 and the second 20-10. 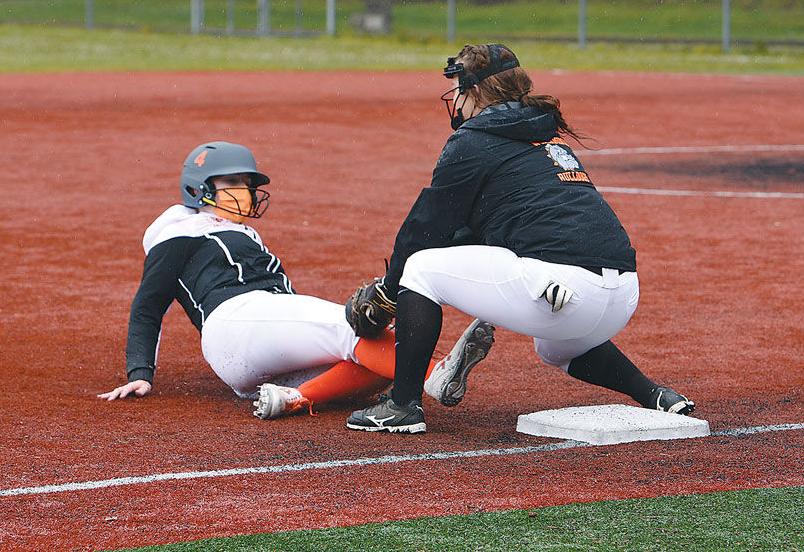 Junior shortstop Addie Gates from Taft High School can’t avoid the tag while sliding into third base during the first game of an April 24 doubleheader with Willamina in Lincoln City. 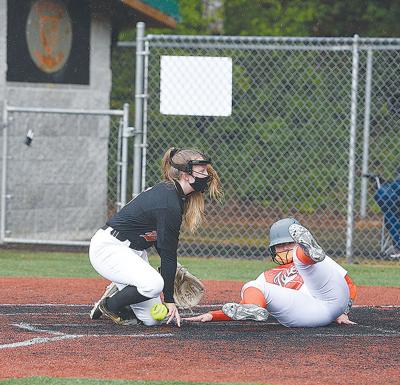 Sophomore Lily Hatton pitches Saturday, April 24, during the opening game of a doubleheader sweep of Willamina in Lincoln City. Taft won the first game 16-6 and the second 20-10.

Junior shortstop Addie Gates from Taft High School can’t avoid the tag while sliding into third base during the first game of an April 24 doubleheader with Willamina in Lincoln City.

The Tigers splashed their way to a pair of wins at home over the Bulldogs, taking the opener 16-6 and the nightcap 20-10. Both contests were called in the sixth inning due to the 10-run margin rule.

In the first game, junior Lily Hatton got the start in the circle for the Tigers and threw three innings to earn the win. She allowed four earned runs on four hits and two walks while striking out one.

Hailey Weaver threw the final three frames for Taft. She surrendered a single earned run on one hit, walked five and fanned a pair.

Weaver led an 11-hit Tiger attack at the plate, finishing with three RBIs and a double in her 2-for-3 outing. Senior centerfielder Claira Tolan singled and drove in three for Taft, catcher Nat Gates doubled twice and junior shortstop Addie Gates doubled, drove in one and singled twice for Taft.

Taft scored five runs in each of the first two innings and plated two in the bottom of the sixth to take the 10-run lead to end it.

The Tigers didn’t take their paws off the gas pedal in the second game, collecting 14 hits and scoring a season high 20 runs.

Weaver went the distance in the circle for the Tigers. The Bulldogs tagged Weaver for 10 runs, seven earned, on eight hits and four walks. Weaver struck out five Willamina batters.

Earlier in the week, on Thursday, April 22, the Tigers posted a 13-8 road defeat of Yamhill-Carlton, and they head into this week’s action with a 4-3 overall record.

Taft is slated to host Clatskanie at 4 p.m. Wednesday before hitting the road Saturday for a doubleheader at Clatskanie.

Toledo found its stroke on the diamond last week, picking up a trio of wins to improve to 5-0.

On Thursday, April 22, the Boomers blasted Reedsport 17-1 before earning a doubleheader sweep Saturday, April 24, at home against Gold Beach. The Boomers won the first game against their 2A/1A-SD4 rivals 15-0 and the second contest 20-2.

Game reports for all three Toledo contests were not submitted to the News-Times prior to deadline. The Boomers were scheduled on Tuesday to host Kennedy.

At Cascade, the Cubs fell for the first time this season in an April 22 shutout.

With the loss, Newport slipped to 5-1 heading into its scheduled contest Monday at Philomath/Alsea.

Further information on the Cubs’ game against Cascade was not submitted to the media prior to the News-Times’ sports deadline.

Junior Stella Barber led the way for the Newport girls, earning third-place finishes in the 200 meters and high jump. Barber took fourth in the javelin. Cubs junior Aliya Larsen won the 1,600 and finished second in the 3,200.

Newport senior Samantha Hollaway posted a personal-best 18.52 seconds in taking second in the 100 hurdles, and freshman teammate Charlotte Gardner placed fourth in the 800.

Cubs senior Payton Cunningham led the Newport boys to a third-place finish in the boys team standings, North Bend won the team championship with 156 points, Siuslaw was next with 129 points, and Newport took bronze with 108.

Cunningham won both the 110-meter hurdles and high jump and placed second in the long jump. Newport senior Larell Covington set personal bests in winning the 100 in 11.65 seconds and taking second in the 200 with a time of 24.47 seconds.

At Coquille, the Waldport boys team finished third, and the girls team placed fifth on April 23 at the Coquille Twilight Invitational meet. Waldport was the lone area school participating.

Irish senior Jessica Dooley led the Waldport girls effort, earning second-place finishes in the 400 meters and the pole vault. Senior Kylie Burk nabbed a second-place medal for the Irish in the high jump.

Myrtle Point also took the girls team title with 272 points. Coquille was second with 242, Reedsport was third at 153 and Gold Beach placed fourth with 101.5.

At Junction City, junior Klaira Flatt was Toledo’s top performer when the Boomer boys and girls participated April 24 in the Junction City Invitational.

Flatt placed second in the 400 meters, fourth in the 300 hurdles and eighth in the long jump competition.

Xander Harstock earned the top individual performance for the Toledo boys, finishing eighth out of 19 competitors to complete the race.

At Toledo, the Boomers ran their winning streak to three games with a pair of lopsided victories at home at the end of last week.

McAlpine threw five innings of four-hit ball to get the win on the mound. He walked one and fanned 11.

Coren Loper tossed an inning of relief for Toledo.

Loper collected three singles and a double in leading the Boomers past Gold Beach.

Rozewski went two innings on the mound, allowing three hits and striking out three. Cross and Loper each pitched relief stints for the Boomers.

Toledo was scheduled to travel Tuesday to face Siletz Valley/Eddyville Charter in its next game.

At Myrtle Point, the Irish picked up their first win this season in an April 22 game called after five innings due to the 10-run margin rule.

Waldport, which improved 1-2, was scheduled Tuesday to host Reedsport.

No other information was available as of the News-Times’ sports deadline.

At Woodburn, the Cubs cruised to the 4A-3 Oregon West Conference win April 22 in a game halted after five innings due to the 10-run margin rule.

Statistics and additional details weren’t submitted to the media prior to the News-Times’ deadline.

The Cubs, who upped their record to 4-2 after scoring their third straight win last Thursday, were scheduled to return to the diamond Monday at home against Sweet Home.