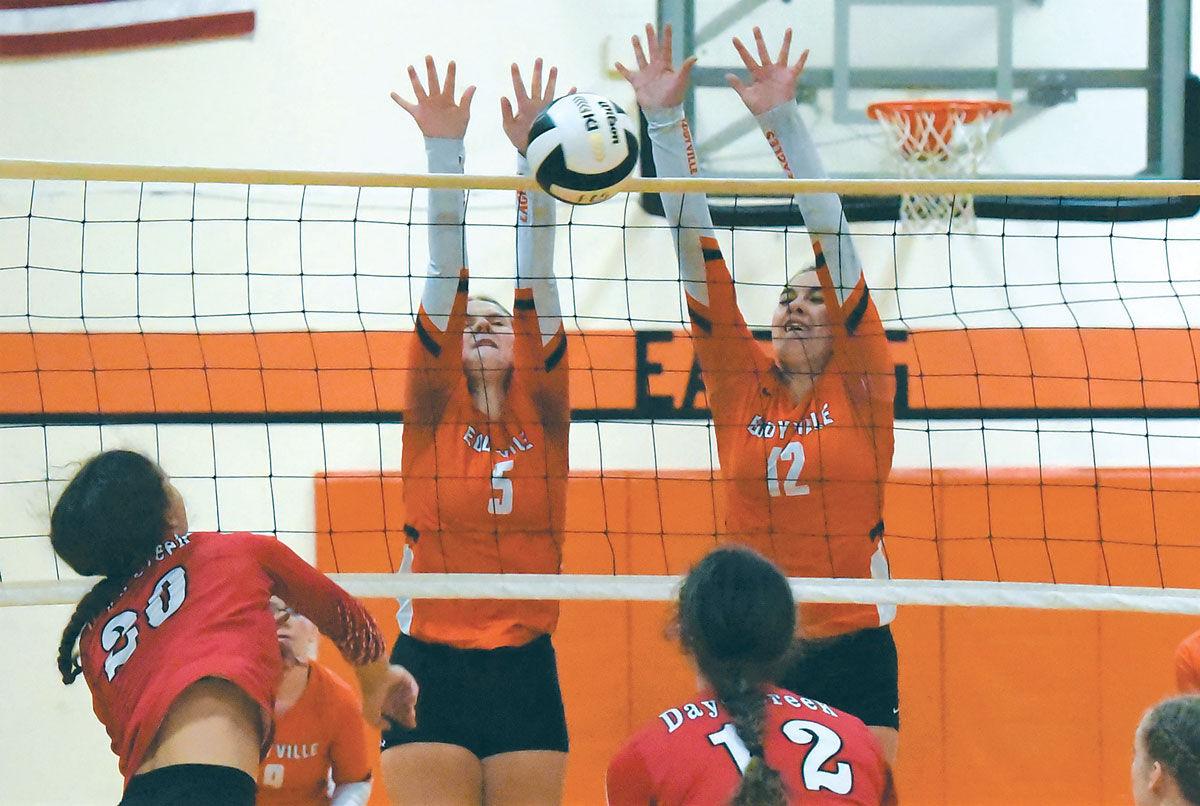 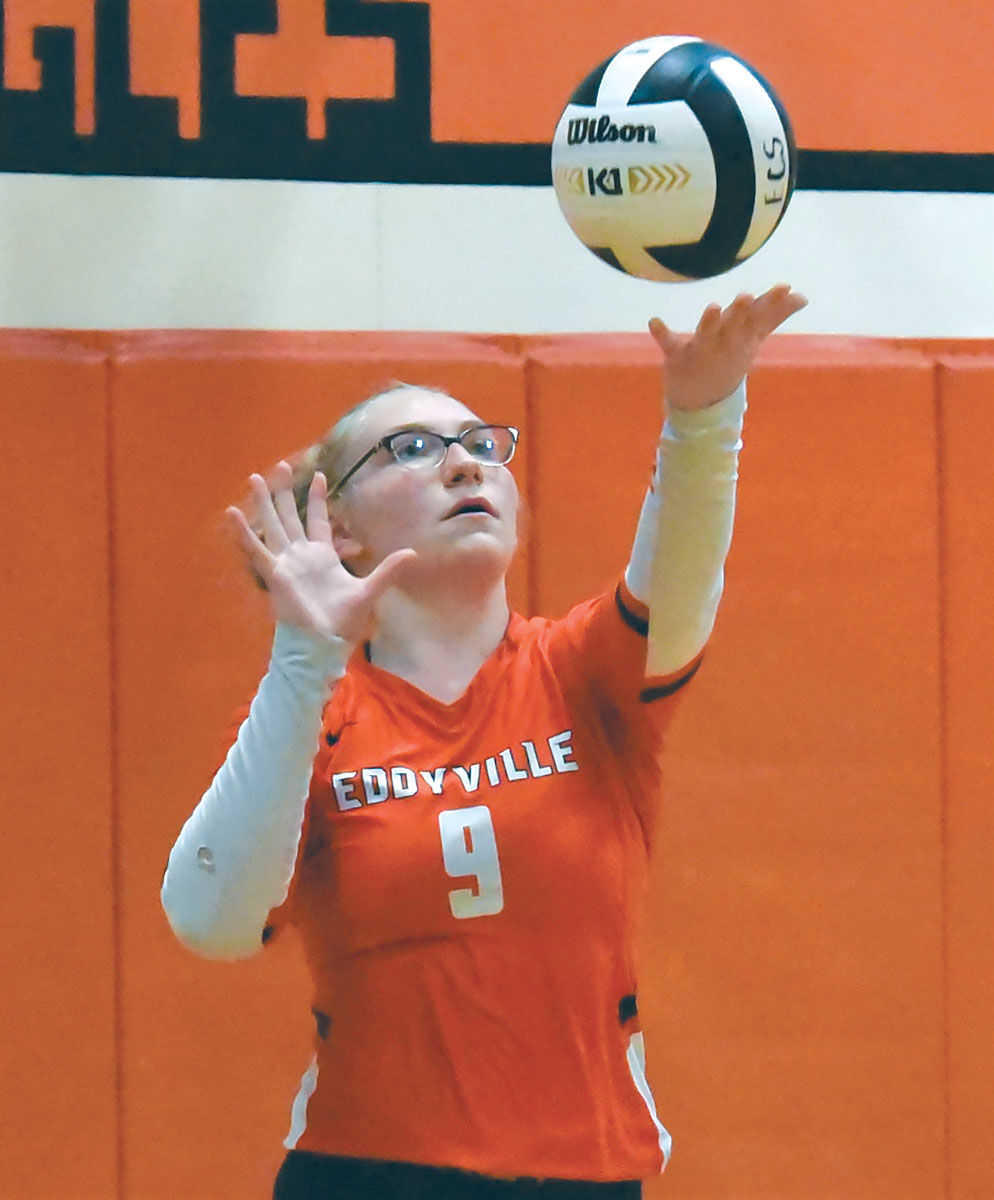 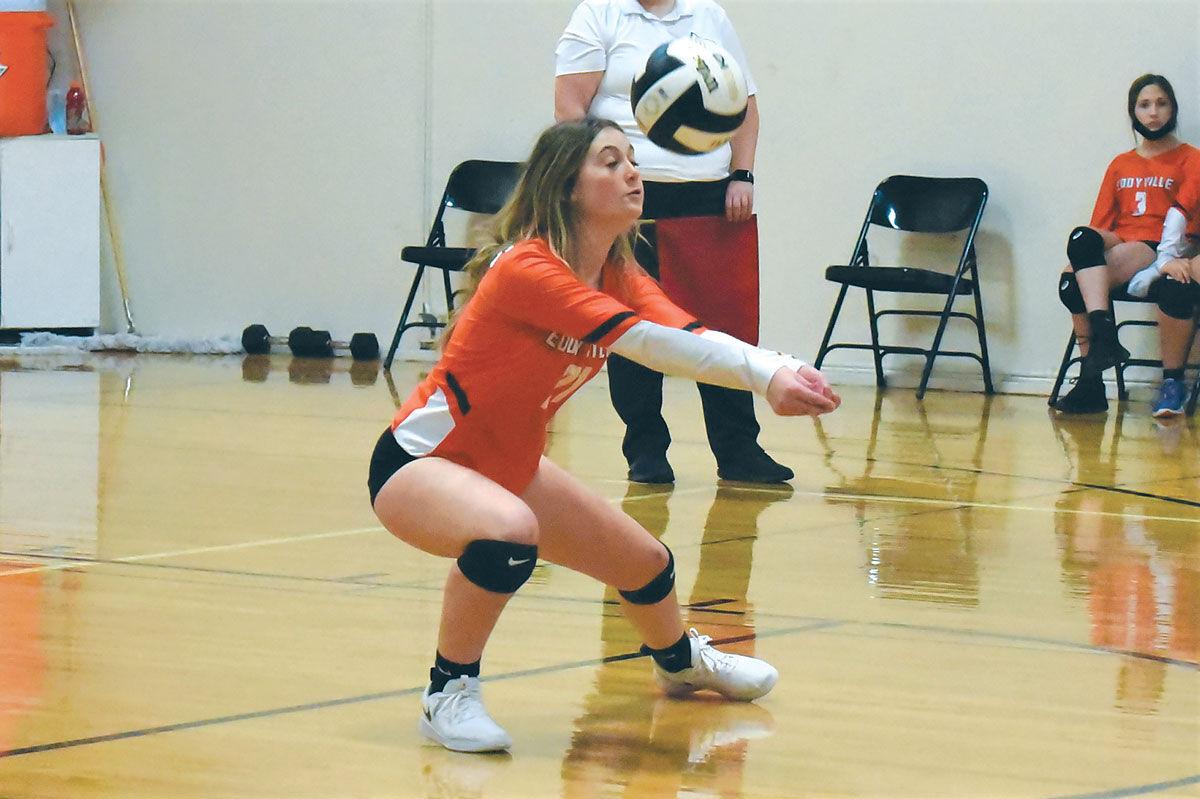 Eddyville Charter sophomore Terra Thomson has some difficulty receiving a serve Oct. 27 during the Eagles’ first-round 1A volleyball state tournament match at home against Days Creek. (Photo by Michael Heinbach)

Eddyville Charter sophomore Terra Thomson has some difficulty receiving a serve Oct. 27 during the Eagles’ first-round 1A volleyball state tournament match at home against Days Creek. (Photo by Michael Heinbach)

EDDYVILLE — A gym nearly packed to capacity with vocal Eddyville Charter supporters and a whole lot of school pride on display wasn’t enough to boost the Eagle volleyball team to victory in its 1A state tournament first-round matchup with Days Creek.

After fighting their way to state the weekend prior through the 1A-3 Mountain West League playoffs, the Eagles were no match for an inspired Wolves team Oct. 27, who set the tone early in a 25-12, 25-20, 25-23 sweep in the tournament’s first round.

“I can't complain (about our performance tonight),” Days Creek head coach Rachel Matchett told the News-Review of Roseburg. “It's always good to get a win on the road. We do need to work on our passing.”

The Wolves took no time in establishing themselves in Eddyville’s gym, scoring nine of the opening 12 points of the match and bolting to a 24-9 advantage with the help of a nine-point run anchored by Leodoro’s serving in the first set.

The Eagles played Days Creek even throughout the majority of the second game. And though they held a 20-19 advantage, Days Creek rallied to score the following six points to win the game and put Eddyville on the brink of elimination.

With the Wolves trailing 23-21 in the third game, Leodoro started Days Creek’s rally with an ace. The Wolves won the following two points, then clinched their victory on a kill by senior Kaylee Wensorski.

For the home team and head coach Mariah Silvonen, the loss was a difficult way to end a successful season that saw the Eagles finish 11-7 after going 9-3 in league matches. It also marked the end of the prep volleyball careers of Eddyville seniors Patience Knight and Hope Gassner, both of whom were with the program when Silvonen took over in 2018.