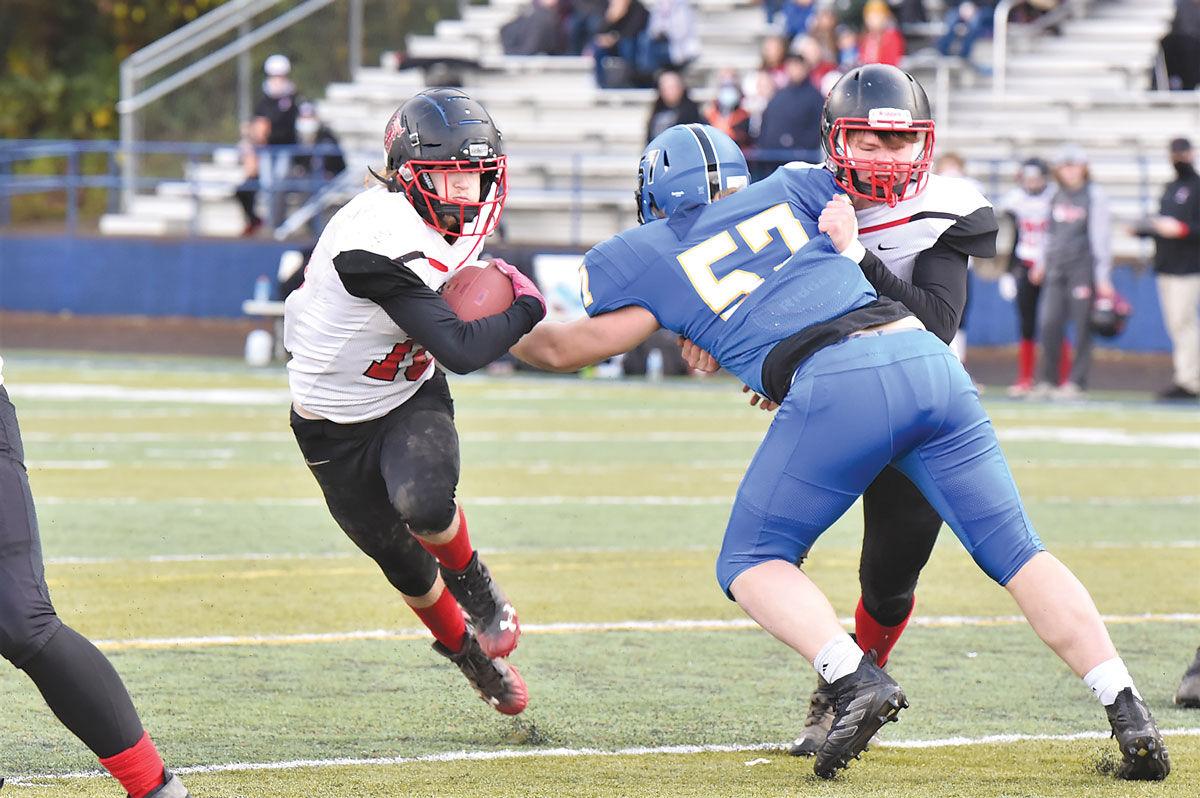 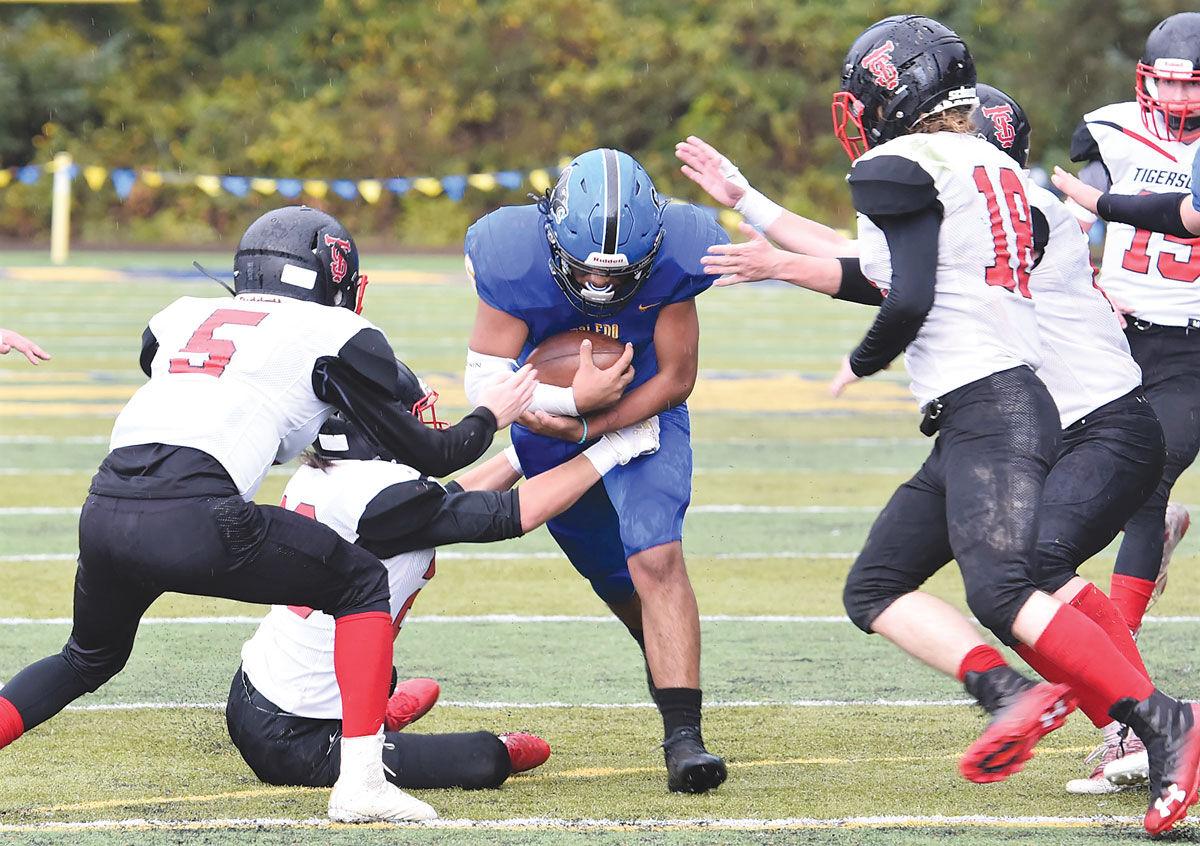 Boomers freshman running back Tyee Garcia blasts his way through the Weston-McEwen defense during the second quarter of the TigerScots’ 20-14 defeat of Toledo on Nov. 6 in a 2A football first-round playoff game at Jack Dahl Stadium in Toledo. (Photo by Michael Heinbach) 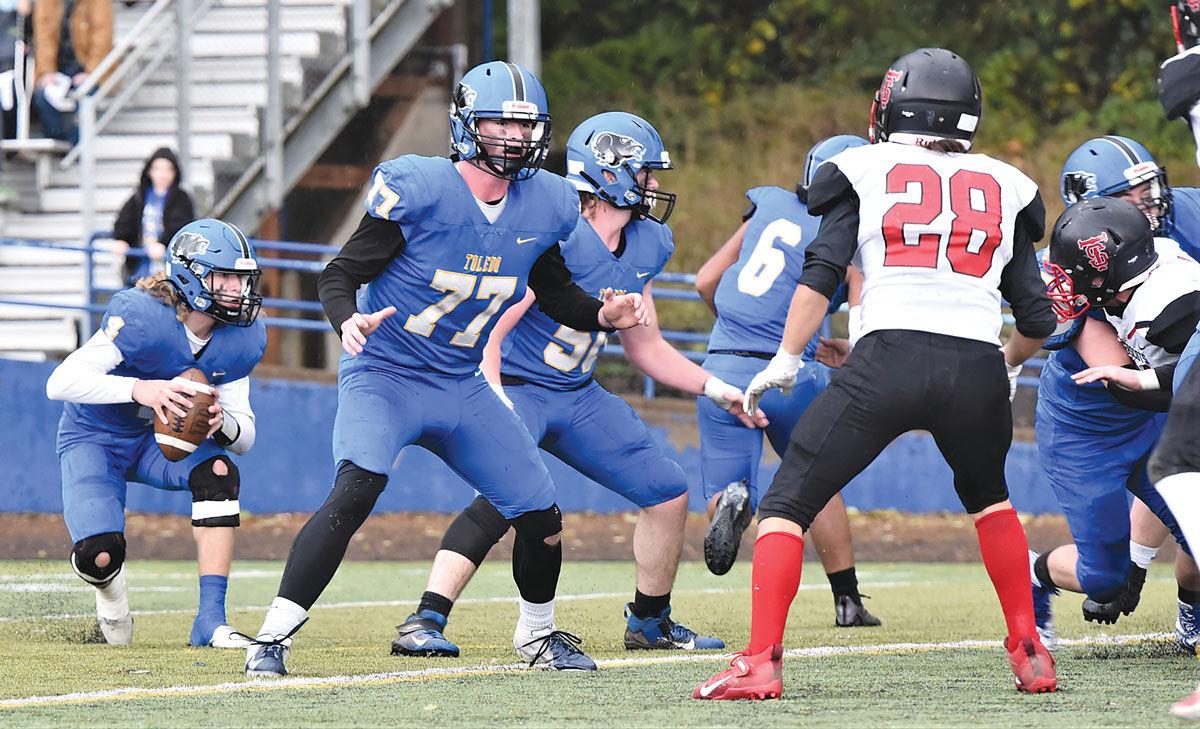 Boomers freshman running back Tyee Garcia blasts his way through the Weston-McEwen defense during the second quarter of the TigerScots’ 20-14 defeat of Toledo on Nov. 6 in a 2A football first-round playoff game at Jack Dahl Stadium in Toledo. (Photo by Michael Heinbach)

TOLEDO — The 2A football first-round state playoff game Saturday afternoon at Jack Dahl Stadium was a battle of stout defenses, and much to the displeasure of the vocal home crowd, the visitors made the big play at crunch time.

Senior running back Levie Phillips paced a methodical Weston-McEwen rushing game, carrying 22 times for 83 yards and two touchdowns. His second score was a 1-yard plunge on fourth-and goal with 5:08 to go in the fourth quarter. It capped the TigerScots’ best offensive possession of the day, a 14-play, 7-plus minute drive that put Weston-McEwen ahead 20-14.

After the Boomer defense stuffed Phillips’ 2-point conversion run short of the goal line, Toledo got the ball back with 5:02 left at the Weston-McEwen 42-yard line. With their season on the line, Boomers head coach Jeff Taylor called for a heavy dose of rushing attempts by Gunner Rothenberger, and the junior quarterback delivered.

Rothenberger and Co. answered with an eight-play effort, with Rothenberger rushing six times for 36 yards, handing off once to junior Rayden Taylor and throwing a 3-yard pass to Sterling Buckley. Likely by design, the Boomers’ drive ran the clock down to less than a minute.

After Rothenberger extended Toledo’s final drive with a 4-yard run on fourth-and-three, the Boomers had first down on the Weston-McEwen 27-yard line with just under a minute to play. On the following snap, Blankenship stepped in front of Rothenberger’s pass at the 20-yard line, and the TigerScots needed only to kneel down once to run out the clock.

“I think everyone today really pulled through and really worked together to get the job done,” Phillips said, still out of breath after joining his teammates and coaches in a spirited rendition of the Weston-McEwen fight song.

Sophomore Cooper Rothenberger found the end zone twice in the second quarter — once on a 7-yard pass from his older brother, and again on a 9-yard run just 44 seconds before halftime that put the Boomers up 14-6 at intermission.

Theodore White caught a 62-yard TD pass from Weston-McEwen quarterback Blane Peal early in the third quarter, and Peal’s successful conversion run made it 14-14 before the TigerScots pulled ahead in the final stanza.

Phillips shouldered the bulk of the load during what became Weston-McEwen’s game-winning drive, running nine times for 37 yards, but was quick to tip his cap to the TigerScot defense for rising to the occasion when it mattered most.

“It’s good stuff. Other teams can come down and drive and pick up yards on us, and that’s all good,” Phillips said. “But when it comes down to it, we get the stop we need all year.”

After a postgame talk with his team, Coach Taylor said his greatest joy during a season that began with three straight losses before Toledo rallied to six consecutive wins and a 2A-SD championship was watching his team improve exponentially each week.

“It’s been the same thing week after week that we’ve talked about since Week 1,” Taylor said. “Watching the growth of these guys week to week has been really special. Now we have a whole offseason to grow, so I’m looking forward to that and watching these guys continue to get better.”

Taylor added that the seniors who saw their last action in a Toledo football uniform on Saturday were key to building the groundwork for the program’s future success.

Weston-McEwen faces a 1 p.m. quarterfinal matchup this Saturday at No. 1 Heppner.