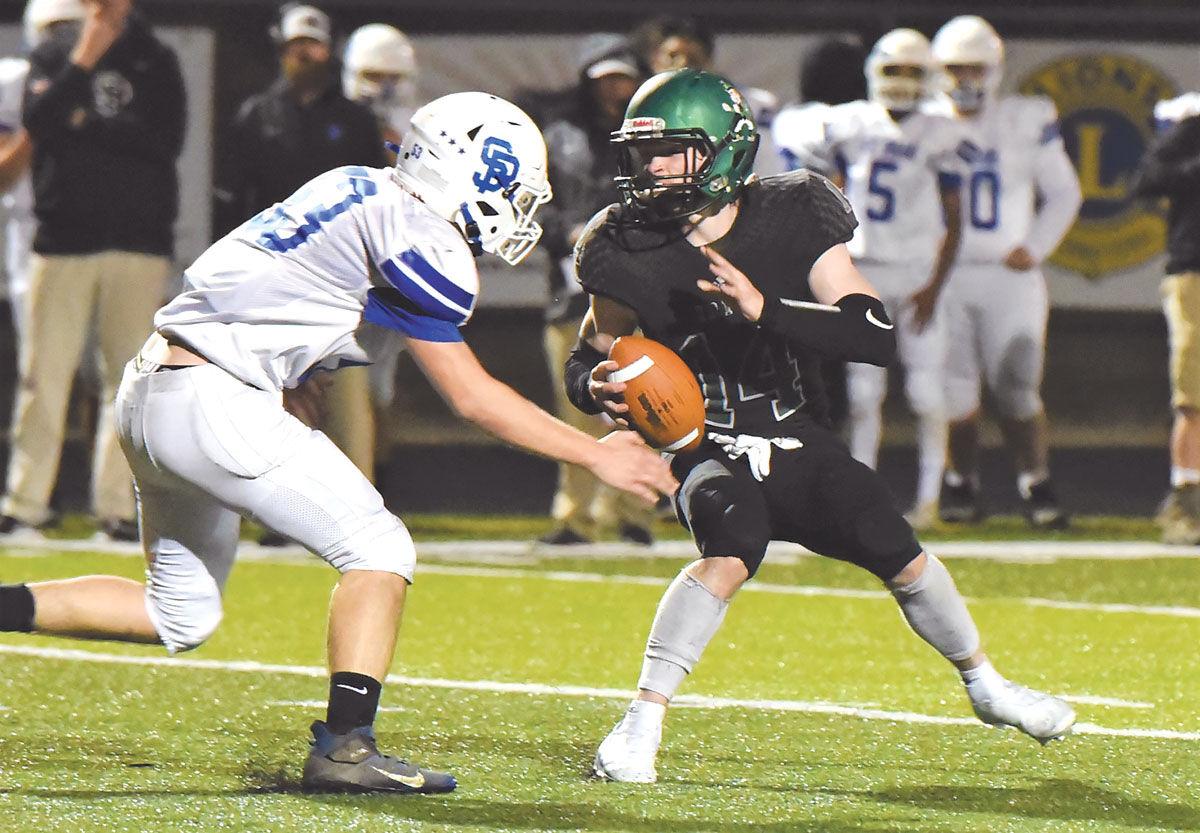 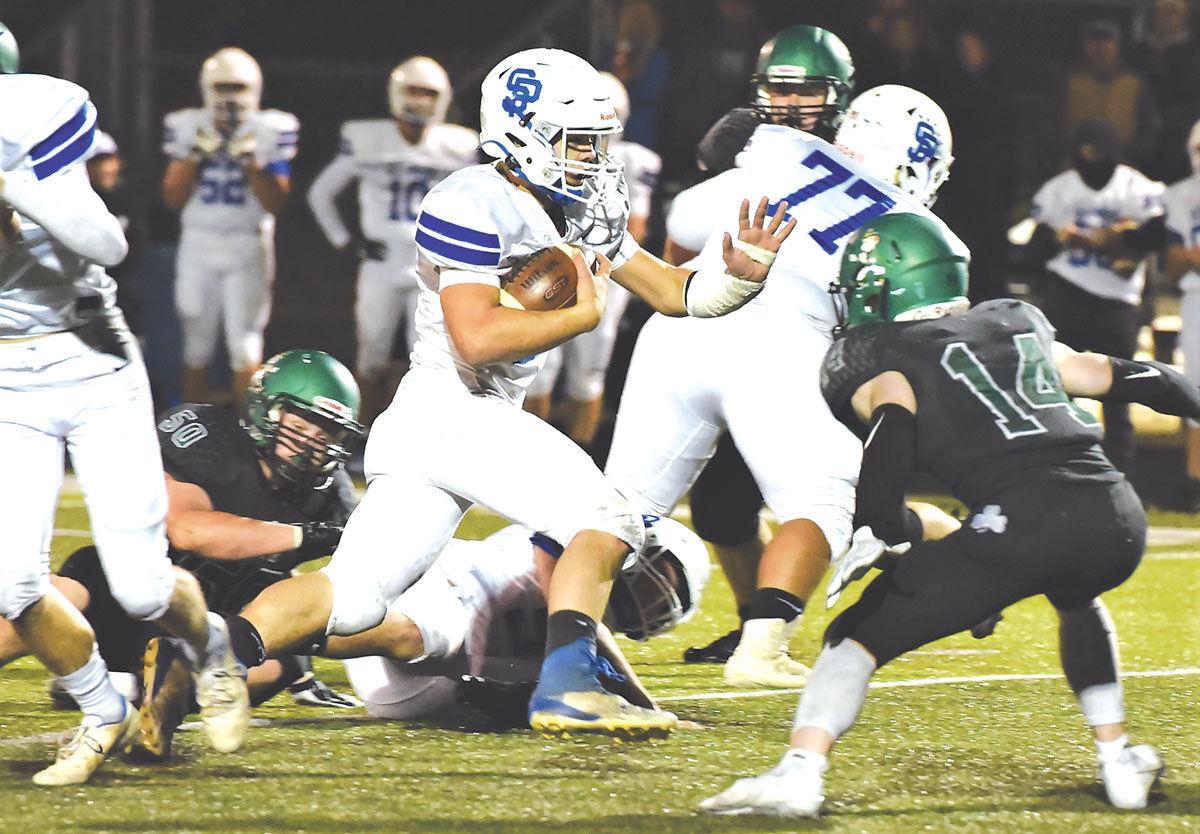 Bryce Williams (with ball) of No. 3 St. Paul blows past the line of scrimmage Oct. 7 during the Buckaroos’ 80-36 defeat of fourth-ranked Waldport in Waldport. (photo by Michael Heinbach) 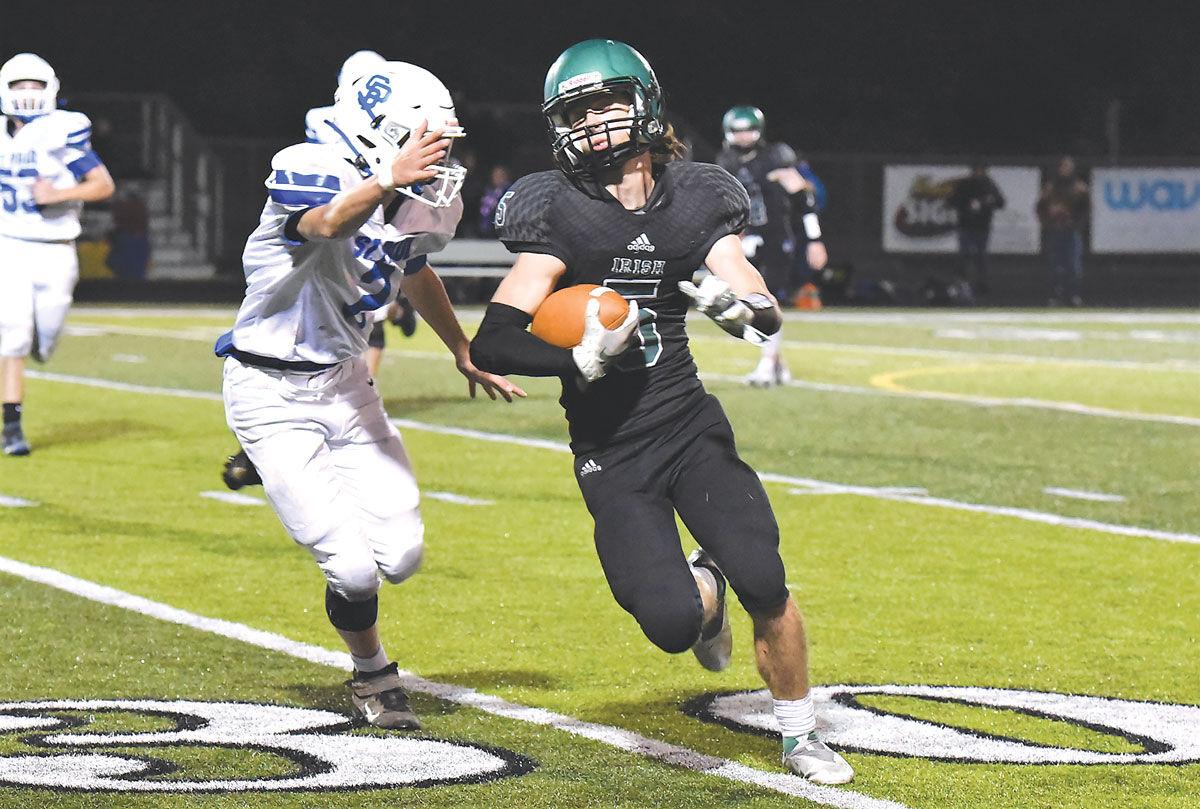 Waldport senior running back Levi Fruechte looks to turn the corner past a St. Paul defender Oct. 7 during a 1A-SD 1 North, 8-player football game in Waldport. The No. 3 Buckaroos dealt the Irish their first loss of the season in an 80-36 defeat. (Photo by Michael Heinbach)

Bryce Williams (with ball) of No. 3 St. Paul blows past the line of scrimmage Oct. 7 during the Buckaroos’ 80-36 defeat of fourth-ranked Waldport in Waldport. (photo by Michael Heinbach)

Waldport senior running back Levi Fruechte looks to turn the corner past a St. Paul defender Oct. 7 during a 1A-SD 1 North, 8-player football game in Waldport. The No. 3 Buckaroos dealt the Irish their first loss of the season in an 80-36 defeat. (Photo by Michael Heinbach)

WALDPORT — Whenever something went right on Oct. 7 for the fourth-ranked Waldport football team, it wasn’t long before the program that Irish head coach Jeff Skirvin calls the standard of 1A-SD 1 West reminded all in attendance why that’s the case.

The No. 3 St. Paul Buckaroos found the end zone each time it got the football, racked up 622 total yards and dealt the Irish their first loss of the season, an 80-36 drubbing on their home turf.

It didn’t take long for St. Paul to assert itself and silence an excited home crowd there to witness Waldport’s biggest showdown on the gridiron in recent memory — a matchup of top-5 teams who began the evening a combined 8-1. St. Paul’s lone defeat was a 10-point loss Sept. 17 at No. 2 Powder Valley.

Buckaroos junior running back Hunter Naumann set the tone immediately last Thursday night, returning the opening kickoff 68 yards for a touchdown. And when senior running back Clancy Koch rushed for a successful 2-point conversion, the Irish trailed 8-0 before many in attendance were seated.

It was precursor of a long night for Waldport, which for the first time during the campaign struggled to find a rhythm on offense, and never came up with the stop it needed on defense in slipping to 0-1 in 1A-SD 1 West, 4-1 overall.

The one-sided loss didn’t deter Skirvin’s belief that the program he’s built, which lost by 74 points to St. Paul when the teams played in 2019 in Waldport, is becoming a force.

“I’ll be honest with you,” Skirvin said afterward, “we’re an emerging team and a program that’s definitely on the rise, and this was our first shot at the big show. I’ll guarantee you, the next time we show up for the big show, from the coaches all the way to the kids, we’ll be better prepared and ready to go.”

Koch ran nine times for 237 yards and two touchdowns. Bryce Williams gobbled up another 156 yards on the ground, and Lance Tuck threw for a TD and rushed for three more.

The Buckaroos, state runners-up in 2018 and 2019, went up 16-0 less than six minutes into action on a 9-yard Tuck touchdown scamper. The Irish responded immediately and scored their first points of the evening when senior running back Levi Fruechte took an option pitch from quarterback Zak Holsey and broke free down the right end and down the sideline for a 53-yard scoring run.

St. Paul responded with a 10-play, 59-yard drive that took 4:30 off the clock and culminated in a Tuck touchdown pass from 9 yards out to Koch. After an Irish 3-and-out and a Fruechte punt, the Buckaroos took a 30-6 lead at the end of the first quarter on a 51-yard Williams scoring run.

Though Waldport, which entered averaging 52.0 points per game, put together scoring drives of 54 and 31 yards in the second quarter, the Irish still trailed 44-20 at the half.

Twice in the third quarter, the Irish pulled within two scores. A John Miller 39-yard TD reception from Holsey made it 44-28 on Waldport’s initial second-half possession, before Miller returned a kickoff 71 yards for a touchdown with 6:45 left in the third quarter that got it within 50-36.

But it was all St. Paul the rest of the way, and the Buckaroos tallied the final 30 points of the evening, twice capitalizing on Irish fumbles and responding with touchdowns.

“At the end of the day, we got it to a 14-point game, but we ended up turning it over a few times, and it hurt us losing Anthony (Locke) — he’s that lineman that forces a double team from the other guys,” Skirvin said of his 250-pound senior, who left early in the second quarter with an apparent lower-body injury. “But basically, we’ve got do a better job showing up for the big ones. You’ve got to play those big games.”

Regardless of the numbers on the scoreboard last Thursday, Skirvin said he’d like to get another shot at the Buckaroos.

“I’ll tell you what, I’d like to meet these guys in the playoffs,” Skirvin said. “But until that can happen, we’re going to get back at it and work on execution. It’s actually pretty simple, we just want to block and tackle better than the other guys do, and then execute our game plan.”

Waldport hits the road Friday to face Perrydale before hosting Mohawk at 7 p.m. Oct. 22 in the Irish’s final regular season home game. They are scheduled to close the regular campaign Oct. 29 at Falls City/Kings Valley Charter.