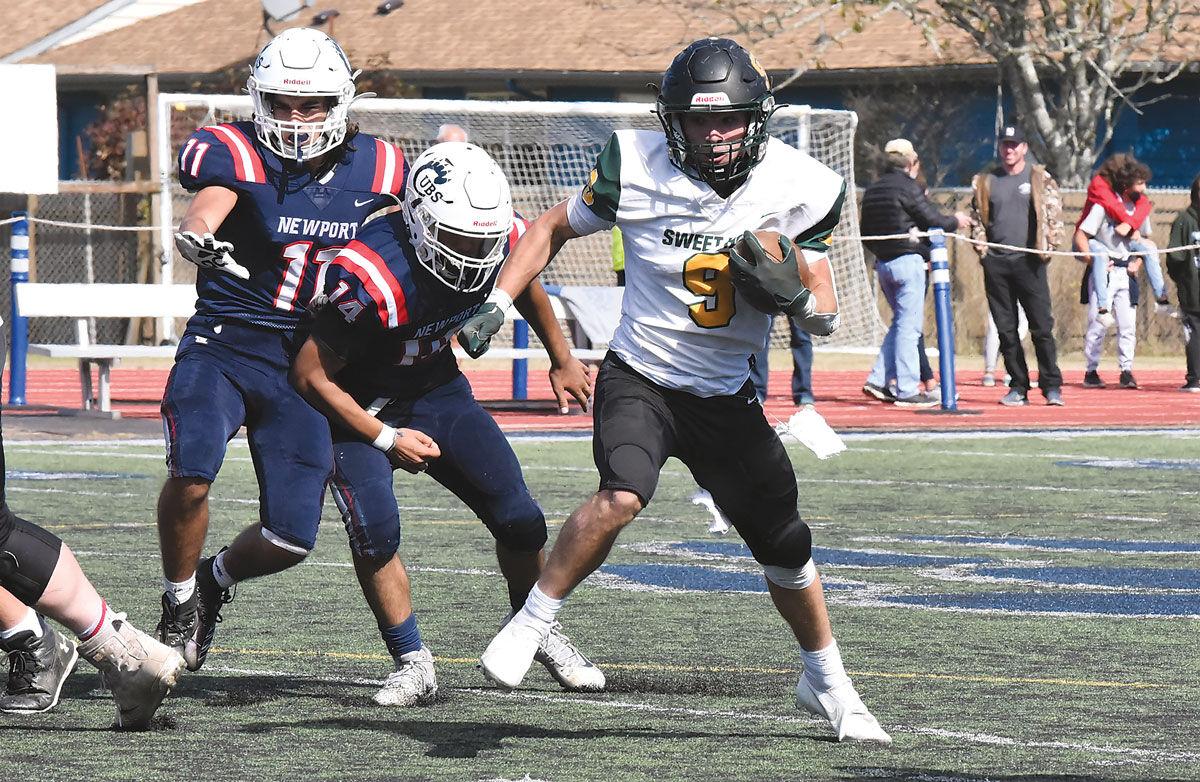 Sweet Home High School senior running back Daniel Luttrell escapes the Newport defense in the Huskies’ 47-21 win in a 4A SD-3 football matchup Oct. 2 at Morrow Field in Newport. (Photo by Michael Heinbach) 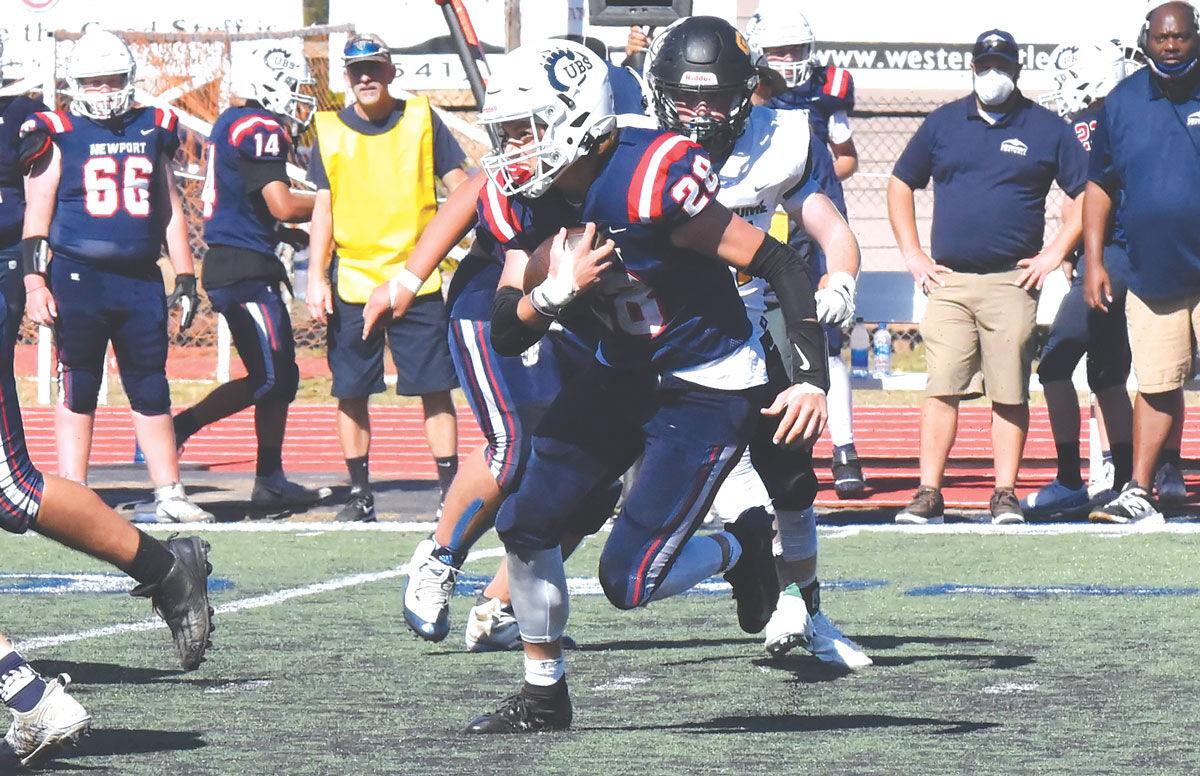 Newport High School senior running back Carson Braxling runs for daylight Oct. 2 during the Cubs’ 47-21 loss in a 4A-SD 3 football game at Morrow Field in Newport. (Photo by Michael Heinbach) 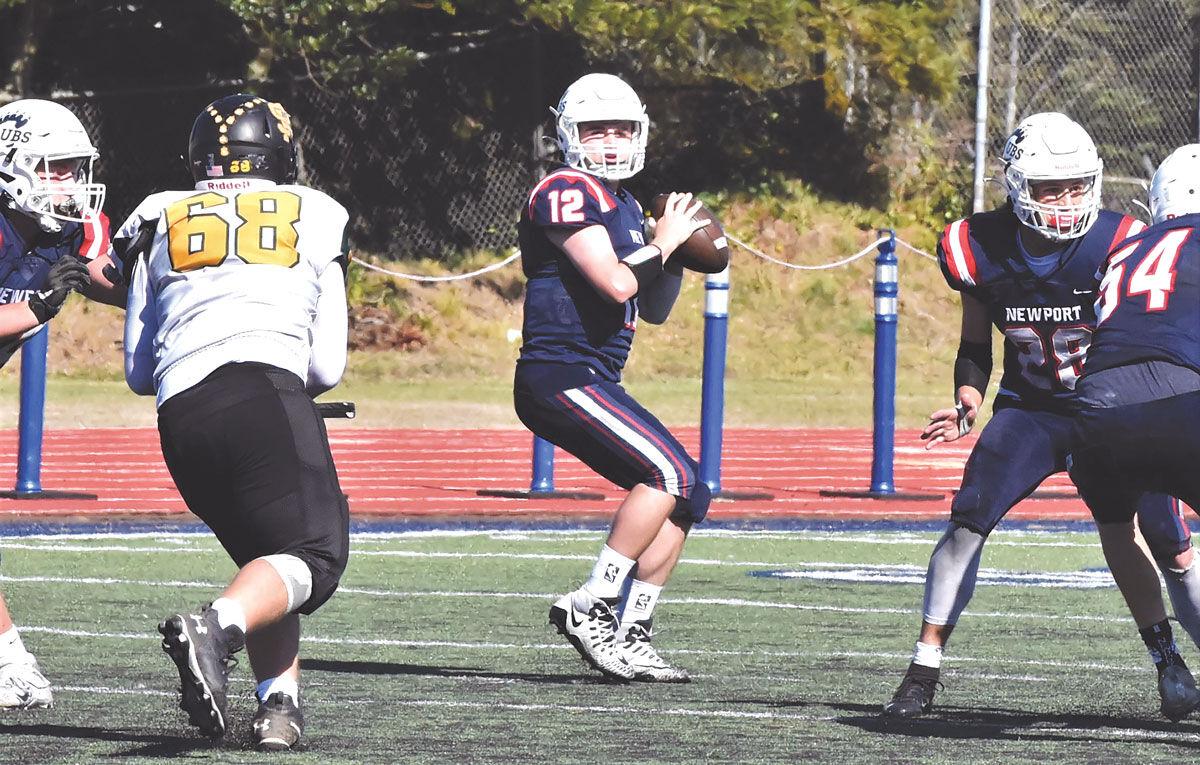 Sweet Home High School senior running back Daniel Luttrell escapes the Newport defense in the Huskies’ 47-21 win in a 4A SD-3 football matchup Oct. 2 at Morrow Field in Newport. (Photo by Michael Heinbach)

Newport High School senior running back Carson Braxling runs for daylight Oct. 2 during the Cubs’ 47-21 loss in a 4A-SD 3 football game at Morrow Field in Newport. (Photo by Michael Heinbach)

NEWPORT — It would have been all too easy for the Newport High School football team to close up shop and stop competing last Saturday afternoon during their 47-21 loss at home to Sweet Home in a 4A-SD 3 football game at sunny Morrow Field. And it could’ve happened very early on and often, but it didn’t.

The Cubs mishandled the opening squibbed kickoff and the Huskies recovered, giving Newport its first turnover of the afternoon just two seconds from the opening whistle. Seven plays later, all rushes by Sweet Home senior running back Daniel Luttrell, the Huskies found the end zone for the first time on their way to a rout of the winless Cubs.

While Luttrell relentlessly pounded the rock in the running game, junior wide receiver Brady Nichols returned a kickoff and a punt for touchdowns, and scored two more TDs on passes from junior quarterback Heath Nichol as the Huskies bolted to a 47-7 lead with 2:30 left in the third quarter.

But Newport (0-1, 0-5), spurred on by a boatload of vocal encouragement via the sidelines from head coach Dan Schaffeld, never quit, and brought the same effort it displayed in the opening minutes to the fourth quarter. Despite the running clock due to Sweet Home’s 35-plus point advantage, the Cubs collected a pair of fourth-quarter touchdowns that Schaffeld says showed his team what it’s capable of.

“They’re totally bought into what we’re doing, and that makes it easier for us as coaches,” Schaffeld said. “These kids know that we’re a building program and that we want to build championships, and they just have to keep coming to practice and grinding it.

"We got beat by 40-plus the last couple games, but I think those last couple of touchdowns late in this game sparked us and showed us that we can be a great football team.”

Senior running back Carson Braxling capped Newport’s best offensive possession of the day — a seven-play, 57-yard drive — with a 4-yard touchdown run with 8:11 to play.

After Newport senior Kaden Bruns recovered his own onside kick, the Cubs needed just two plays to find the end zone for a final time on a 39-yard scamper by senior running back Camden Galen. Bruns was a perfect 3-for-3 in extra-point attempts,

Newport junior quarterback Markus Everitt scored the Cubs’ first touchdown on a 4-yard run in the later stages of the second quarter.

Schaffeld said his team knows its mission beyond the league standings is to build the cornerstones for the program’s future success.

“I think we’ve got a lot of young guys out here that are really buying into what we’re doing, and a lot of them are on the field right now who have never played football,” Schaffeld said. “And I think we’re starting to fly around, and I think we’re starting to become a great football team. We were good today, but we’re getting better, and we’re going to be great, and we’re going to be champions one day.”

Cubs travel to face Woodburn (0-1, 3-2) in a 7 p.m. 4A-SD 3 contest Thursday. Schaffeld said Newport’s mission for the short week was only to keep putting in the effort at practice.

“We’re just going to go back to work,” he said. “There’s no magic secret that we have, we just have to get back at it.”

But before leaving the field Saturday, Schaffeld said his coaching staff doesn’t enjoy the defeats, but that the program it's hoping to build is based on far more than just wins and losses.

“It kind of makes me emotional thinking about it because we are out here under the role of football coaches, but I think we’ve got to be great mentors,” he said. “At the end of the day we’re trying to make these kids productive members of society when they leave this program. It’s not easy, but it helps that they’re buying into what we’re teaching.”