You are the owner of this article.
Edit Article Add New Article
You have permission to edit this article.
Edit
Welcome, Guest
Home
News
Community
Sports
A & E
Business
Food & Beverage
Obituaries
Opinion
Classifieds
Quick Links
Share This
1 of 3 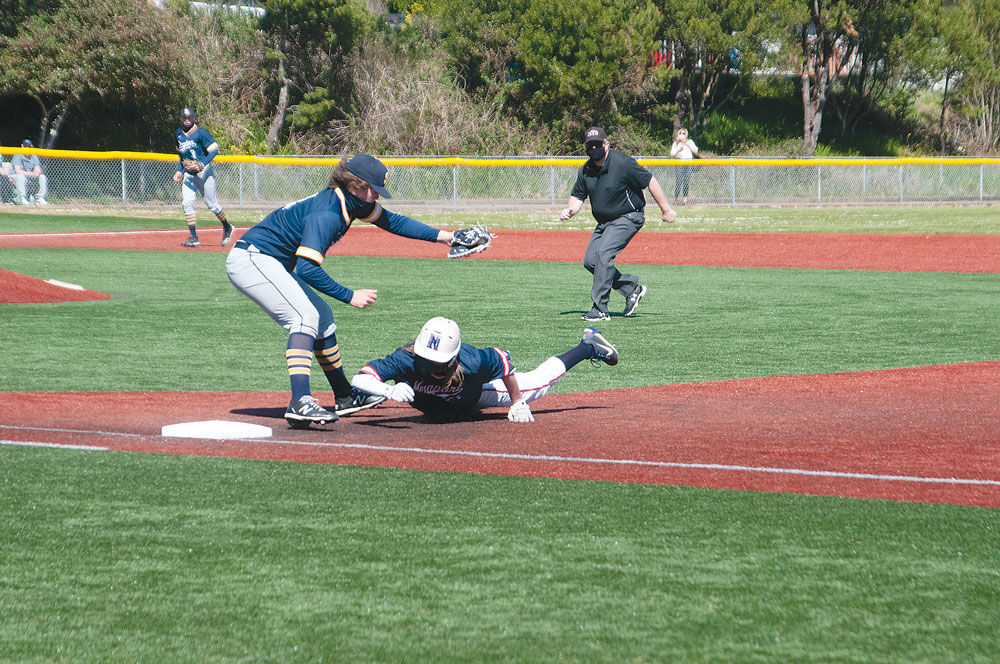 Newport High School junior first baseman Tyler Quillian, diving, is about to get picked off of first base as Stayton’s Jared Jungwirth readies to apply the tag April 16 during the second inning of the Cubs’ 8-5 defeat of the Eagles. 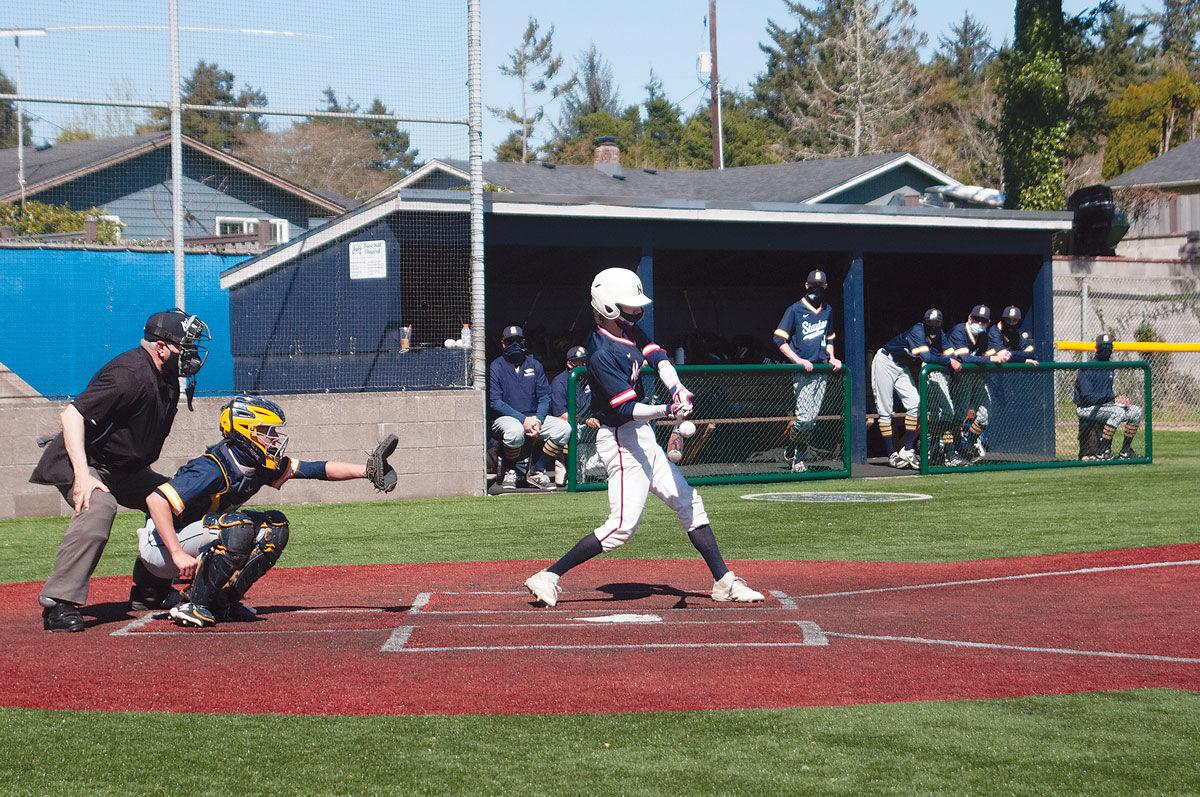 Mitchell Johnson, Newport High School senior catcher, blasts a fifth-inning triple April 16 during the opening contest of a twin bill against Stayton. Johnson finished 2-for-4 with two RBIs in the Cubs’ 8-5 win the first game. 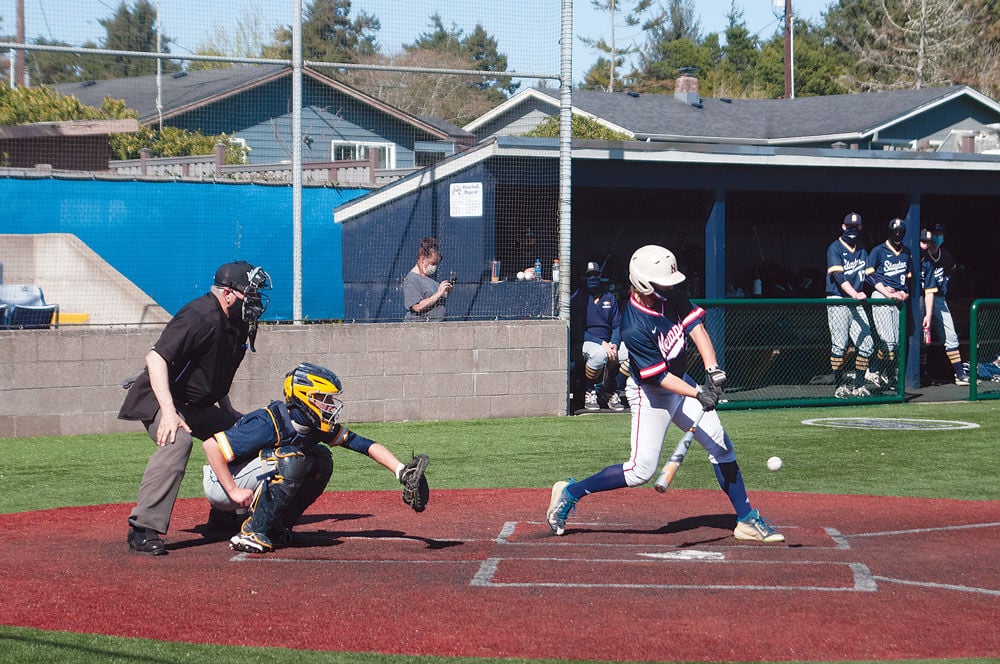 Junior shortstop Carson Braxling looks to put bat to baseball during Newport High School’s 8-5 victory April 16 during the first game of a doubleheader in Newport. Stayton claimed the second half of the twin bill by a score of 17-7.

Newport High School senior second baseman Cole Wiles, throwing, attempts to turn a double play and avoid Stayton’s Danner Salisbury as he slides into second base during the first game of an April 16 baseball doubleheader at Frank V. Wade Memorial Park in Newport. The Cubs won the first contest 8-5 and dropped the night cap 17-7. (Photos by Michael Heinbach)

Newport High School junior first baseman Tyler Quillian, diving, is about to get picked off of first base as Stayton’s Jared Jungwirth readies to apply the tag April 16 during the second inning of the Cubs’ 8-5 defeat of the Eagles.

Mitchell Johnson, Newport High School senior catcher, blasts a fifth-inning triple April 16 during the opening contest of a twin bill against Stayton. Johnson finished 2-for-4 with two RBIs in the Cubs’ 8-5 win the first game.

Junior shortstop Carson Braxling looks to put bat to baseball during Newport High School’s 8-5 victory April 16 during the first game of a doubleheader in Newport. Stayton claimed the second half of the twin bill by a score of 17-7.

NEWPORT — The comforting sounds of metal bats making contact with baseballs — those familiar “pings” of spring — returned for the first time in nearly two years last week to the diamonds at Frank V. Wade Memorial Park, when the Newport High School baseball team split an April 16 doubleheader with Stayton.

Sophomore left fielder Marcus Everitt, who earlier in the week earned selection to the All-Lincoln County School District football team as a quarterback, paced the Cubs’ bats in their 8-5 win in the opener. In the nightcap, the Eagles earned a 17-7 win in a game called after five innings.

In the first game, played before a smattering of fans beneath an unseasonably warm sun, Everitt’s bases-loaded double in the third inning plated three and gave the Cubs the lead. Everitt added an RBI single in the fifth to finish his outing 2-for-3 with a stolen base and a total of four RBIs.

Newport catcher Mitchell Johnson was 2-for-4 with a triple and two RBIs, and pitcher Kaden Bruns singled twice and drove in one.

On the bump, Bruns tossed the complete seven innings, scattering 11 hits while the Newport defense behind him committed just a single error. Bruns fanned six and walked just one Stayton batter.

The Eagles opened the scoring in the top of the third with a Kaden Prien run-scoring double, and Stayton threatened to post a crooked number on the scoreboard after loading the bases with one out. But Bruns escaped further damage by getting Stayton cleanup hitter Tanner Manning to ground into a 4-6-3 double play to end the frame.

A four-hit, three-run Stayton fifth inning, highlighted by senior shortstop Danner Salisbury’s two-run double, put the Eagles up 4-3 before Newport countered with three runs in the bottom of the frame. Johnson successfully executed a delayed steal of home plate in the bottom of the fifth.

Back-to-back RBI singles in the bottom of the sixth by Johnson and Bruns gave the Cubs a pair of insurance runs and an 8-4 advantage heading into the final frame. Stayton responded by rallying for a run before Eagles starting pitcher Wyatt Connally grounded out to second with two aboard to end it.

Salisbury led the Stayton offense, finishing 3-for-4 and driving in three. Eagles reliever Eli Brown, who entered at the start of the fourth inning, took the loss. He threw an inning-plus, allowing two runs on one hit with two strikeouts and one hit batter.

Cody Leming threw the final two innings of relief for Stayton, allowing five hits, including a Cole Wiles one-out double in the bottom of the sixth.

The Cubs, who began the week 3-2, were scheduled to host Sisters on Monday and Woodburn on Wednesday at Frank V. Wade Memorial Park.

At Toledo, the Boomers started their non-jamboree season by falling in an April 15 slugfest to Bandon.

An eight-run fourth inning helped the Tigers to the win. Conner Devine, Joshua Minkler, Parker Lang, Wyatt Dyer and Colton Siewell each collected RBIs in Bandon’s big inning. With the score tied 10-10 in the fifth, the Tigers took the lead for good, beginning with a bases-loaded walk to Lang.

Mason McAlpine and Ryder Smith drove in all the runs in Toledo’s five-run second frame.

The Boomers are scheduled to play today (Wednesday) at Waldport.

The Newport High School softball team couldn’t ask for a better start to the 2021 season after they won a trio of opening-week games in convincing fashion with the help of a college-bound starting pitcher.

After posting a 9-2 win April 12 at Stayton in the Cubs’ first game of the season, Newport earned a 14-0 defeat April 15 against Woodburn and a 15-0 shutout win April 16 over Sisters, both games played on their home field at Yaquina View Elementary School.

Senior pitcher Hattie Imbler-Bremner, who is committed to play softball next school year at North Idaho College in Coeur d’Alene, was dominant in all three of Newport’s outings last week.

In the Cubs’ first game of the season, Imbler-Bremner struck out 15 Eagle batters while in the circle. At the plate, Imbler-Bremner collected a pair of hits, including a double, while freshman outfielder/catcher Victoria Johnson was 3-for-4 at the plate, and sophomore first baseman Emma Schaffner added a pair of singles for Newport.

Imbler-Bremner threw a no-hitter as Newport blanked Woodburn in a game limited to five innings due to the 10-run margin rule. Of the 15 outs recorded with the Cubs on defense, Imbler-Bremner accounted for 14 by strikeout. The line out made by the Bulldogs not via strikeout was a groundout to Imbler-Bremner.

Imbler-Bremner was again the star in the Cubs third win of the week, their 15-0 defeat of Sisters in a game called after four innings. She surrendered just one hit and a walk while fanning six as she and Newport moved to 3-0.

Schones and Imbler-Bremner each doubled for the Cubs, who were slated to play Monday at Sweet Home.

At Lincoln City, the Tigers fell in their first home contest of the season.

Sophomore right-handed hurler Hailey Weaver pitched all seven innings in the circle April 12 for Taft and took the loss. Junior infielder Olivia Coulter had a triple and an RBI for the Tigers, senior centerfielder Claira Tolan drove in a pair and had two singles, and Taft also received a double and a run driven in from junior third baseman Lily Hatton.

Later in the week on April 16, Rainer won both halves of a doubleheader at home against Taft, winning by 12-9 and 11-4 margins. Details from those games were not reported to the media prior to the News-Times’ deadline.

Taft was slated to play Tuesday afternoon at Willamina.

At Toledo, freshman Elka Fisher went 4-for-4 on April 15 to lead the Boomers past the Tigers.

Toledo was scheduled to play at Waldport on Tuesday afternoon.