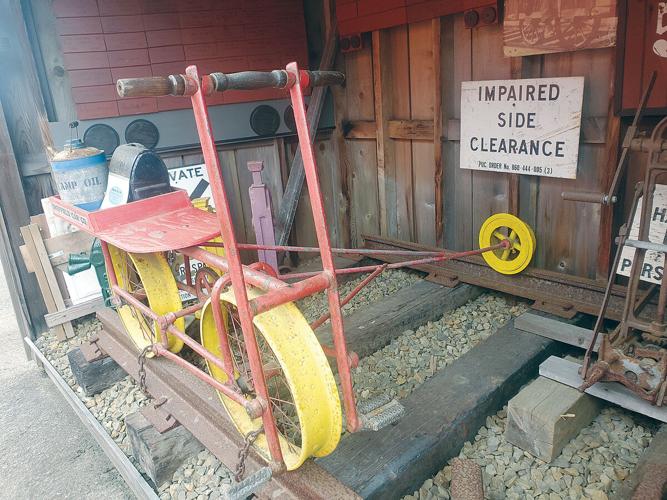 The Yaquina Pacific Railroad Museum currently displays a single person velocipede as part of another exhibit, smaller than the four-seater it plans to debut as part of a new exhibit. 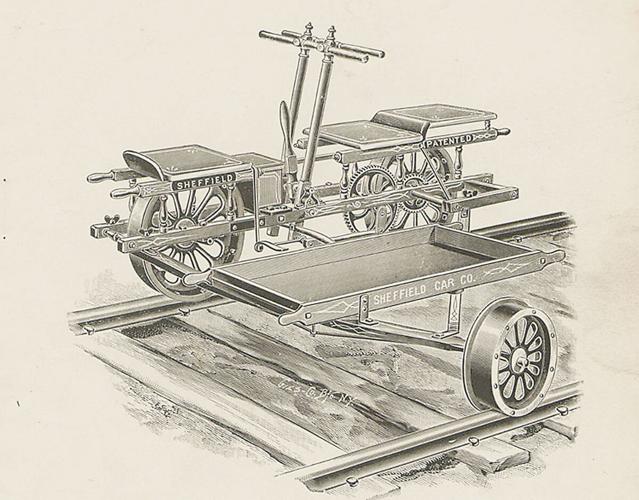 The Yaquina Pacific Railroad Museum will soon assemble its antique Sheffield telegraph velocipede from storage to display in a new exhibit funded by a grant from the Oregon Heritage Commission.

The Yaquina Pacific Railroad Museum currently displays a single person velocipede as part of another exhibit, smaller than the four-seater it plans to debut as part of a new exhibit.

The Yaquina Pacific Railroad Museum will soon assemble its antique Sheffield telegraph velocipede from storage to display in a new exhibit funded by a grant from the Oregon Heritage Commission.

TOLEDO — The Yaquina Pacific Railroad Museum in Toledo recently received funding to build a new exhibit and plans to pull one of its oldest antiques from storage to feature in a new enclosure.

The new exhibit will feature the museum’s Sheffield velocipede, a human-powered, bike-like contraption manufactured by the Sheffield Car Co. to help railroad workers traverse the tracks. A less complex velocipede is currently on display as part of another exhibit, while the stored four-seat velocipede will soon be reassembled as the centerpiece of the museum’s newest exhibit by the end of 2022.

The construction of the new exhibit is being funded by the Oregon Heritage Commission, which donated $6,895 to the Toledo museum this month as part of its annual grant awards. The commission awarded $75,000 in grants to 12 museums throughout the state this month, which are funded by Oregon lottery dollars and awarded to different cultural and historical groups every year.

“By building an additional display shelter, we not only get an artifact out of storage, but also spread out the currently displayed railroad artifacts, which would allow for a more cohesive display,” Museum Director Lisa Watson said in a release about the new exhibit. “Some of the grant funds will be dedicated to sourcing professional grade, informational signage.”

The velocipede currently on display is a one-person model often used by track inspectors and is believed to be from the early 1900s. Three-wheel velocipedes were first created in 1879 and built from lightweight metal and wood that allowed the rider to tip the vehicle off the rails if a train approached. The machines were eventually phased out in the early 1900s in favor of motorized vehicles and became a rare sight by the end of World War II.

The museum’s Sheffield velocipede is a special type of “telegraph velocipede,” designed for use by telegraph operators who needed to maintain lines of communication. The Sheffield is larger than the one currently on display and could fit up to four people at a time, along with their equipment. The patent for the telegraph velocipede was created some time around the 1880s.

The Sheffield Car Company was a successful company during its time and was known to ship products overseas. In addition to velocipedes, the Michigan-based company produced railroad appliances and small cars to assist with track maintenance. The company was eventually be bought out by Fairbanks-Morse, which produced everything from radios and coffee machines to specialized railroad equipment.

The Yaquina Pacific Railroad Museum is open Tuesdays through Saturdays and is currently operating on summer hours, from 10 a.m. to 4 p.m. After Labor Day, hours revert to 10 a.m. to 2 p.m. There is no admission fee for the museum, and staff offer free guided tours to visitors.

The railroad museum will also celebrate the centennial birthday of its 1922 Baldwin Steam Locomotive, One Spot, this August in conjunction with the Port of Toledo’s Wooden Boat Show. As part of that celebration, museum staff will perform a cosmetic restoration of the locomotive and will fabricate and install a “walk through” that make the cab of the vehicle safely accessible to the public. More information about that project will be available at a later date.