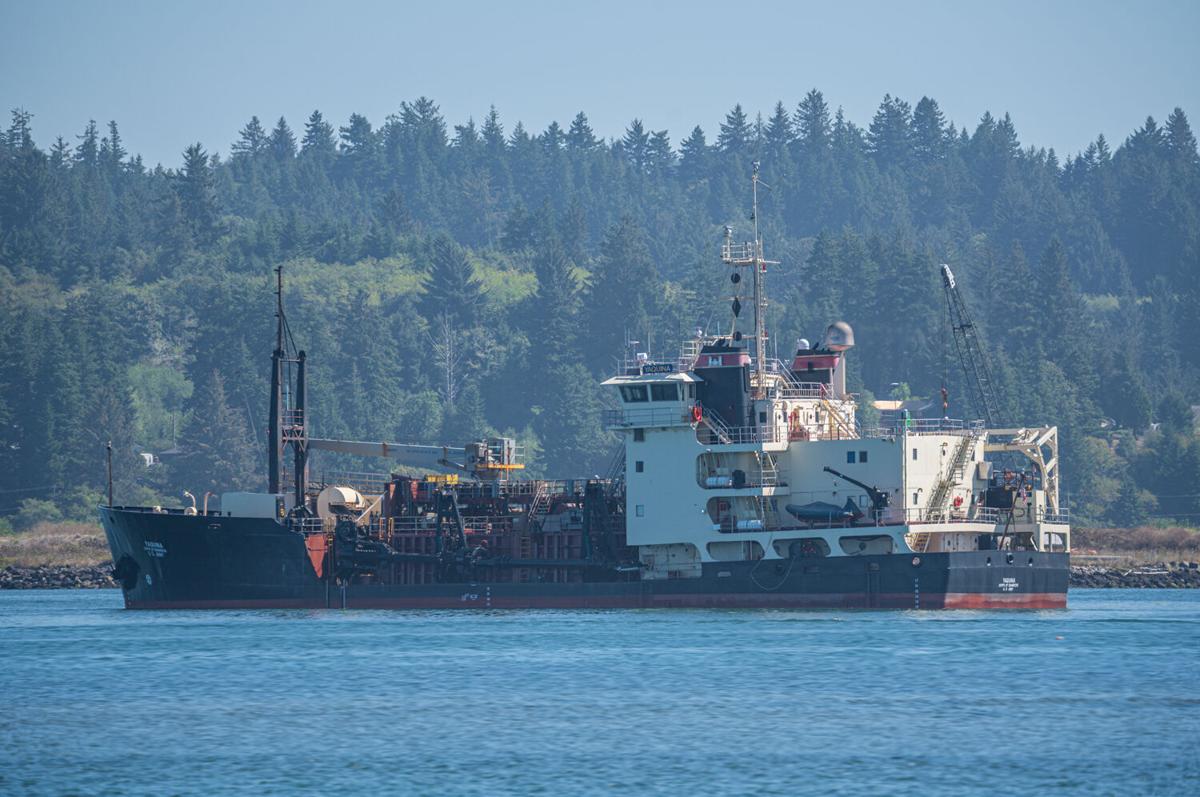 The USAV Yaquina has been working to dredge its namesake, Newport’s Yaquina Bay, for the last two weeks. Using two large vacuum hoses, it draws up accumulated sand and mud, which it stores in a large hopper and transports to a dump site out at sea. (Photo by Jeremy Burke) 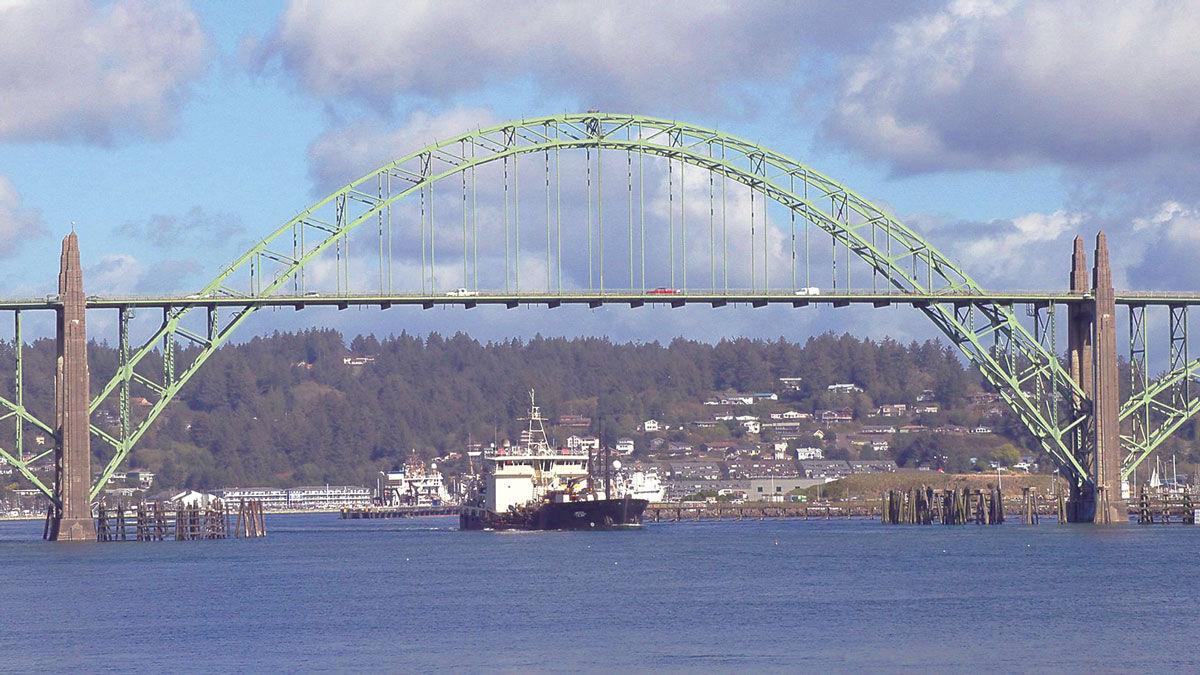 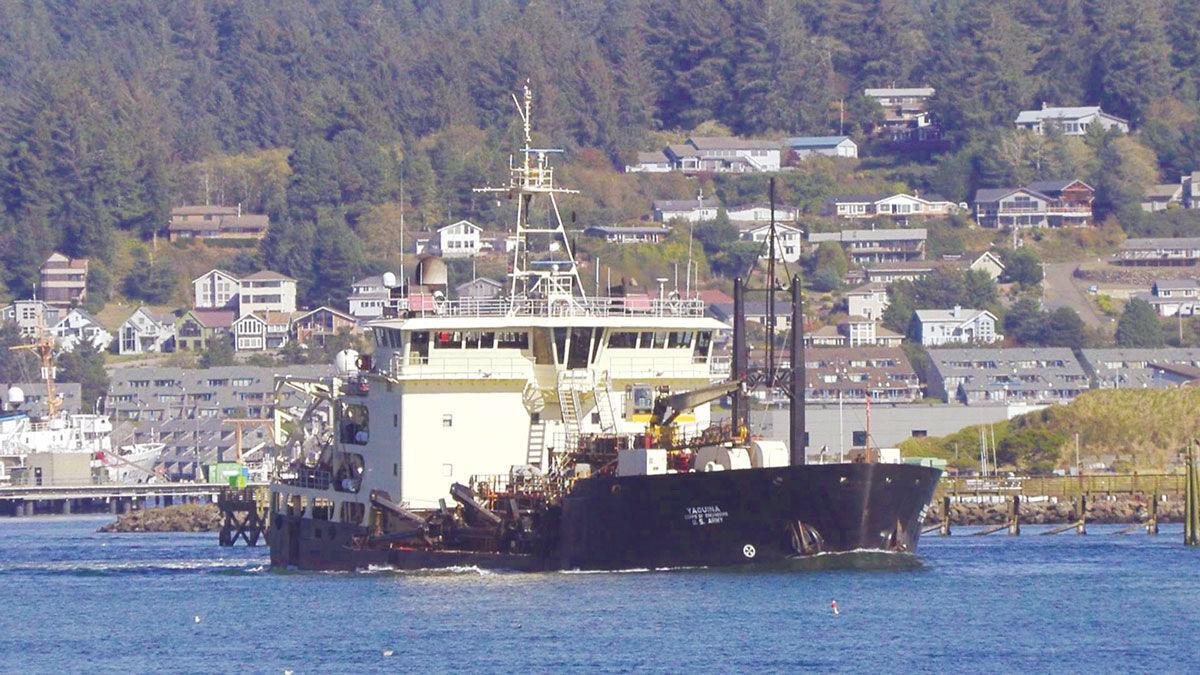 The USAV Yaquina has been working to dredge its namesake, Newport’s Yaquina Bay, for the last two weeks. Using two large vacuum hoses, it draws up accumulated sand and mud, which it stores in a large hopper and transports to a dump site out at sea. (Photo by Jeremy Burke)

The USAV Yaquina, named after Lincoln County’s own Yaquina Bay, is a heavy-duty dredging ship that’s been operating on the West Coast to clean accumulated material out of federal ports and waterways in Oregon and beyond for nearly 40 years.

For the last two weeks, the Yaquina has been hard at work dredging its namesake, sucking up thousands of yards of material to keep the Newport harbor and the surrounding area operating safely.

Greg Speer, Oregon Coast Project Manager for the U.S. Army Corps of Engineers, spoke with the News-Times about the Yaquina and its vital role serving the Oregon coast, including how it operates and how long the 40-year-old ship might remain in service.

“It’s instrumental in keeping our ports open and commerce trading,” Speer said. “It works not only on the Yaquina Bay, but on every Oregon port that has a federal channel, with the exception of Depoe Bay. That means all the way from Tillamook down to the Chetco, it helps keep all the harbors open and the river flowing so that boats are able to get out of their harbors safely.”

Speer said the Yaquina is usually in use around 120 days per year, moving from port to port and watching the weather conditions to ensure it can be used to maximum efficiency at its destination. Each individual port has to pay the cost to mobilize the vessel, which then costs around $110,000 a day to operate, about $4,300 an hour.

”There’s a lot of watching the weather and shuffling around to ensure we get the most efficient use of our time,” Speer said. “We’re really cognizant of the amount of time we use and make sure we get each port the maximum amount of value for that price.”

The Yaquina holds about 1,000 cubic yards of sand, mud and other material at a time as it uses two tubes, which Speer likened to holding a pair of vacuum cleaners, that trail behind it to suck up the material and transport it to a designated ocean dumping site a ways off shore. Speer added that some ports such as Yaquina Bay and Coos Bay have dump sites within their respective bays where the dredged material is dumped, which is then flushed to the ocean by natural rain flow.

“Most of the ship is basically a large, empty hopper the size of a small auditorium, which gets filled with material,” Speer said. “We end up sucking up things like crab pots, anchors and that sort of thing all at the time. We often need to reverse the flow for awhile to flush them out. Lost crab pots are mainly the things we pick up. Anything we suck up we have to report as well, including any marine mammals. We’ve picked up a few dead seals over the years, which were already dead and laying at the bottom of harbors.”

Speer added that material is usually tested around every five years to ensure it’s still safe to dump out at sea.

Before the pandemic, the Yaquina’s two 25-peson crews would work a week on then a week off, with the active crew keeping the ship running 24 hours a day. Currently, the crew works two-week periods at a time instead, to reduce the risks associated with manning a ship during the pandemic.

“They’re all U.S. merchant mariners with the appropriate licenses with appropriate mates with the right tonnage license, as well as support staff with their own licenses,” Speer said.

In addition to Oregon ports, Speer said the Yaquina also operates on ports in Washington and northern California.

The Yaquina was first commissioned in 1981 and was dedicated in Newport. It has been operating under the U.S. Army Corps of Engineers for 40 years and was featured in the History Channel’s 2005 Modern Marvels series.

That long service record may come to an end within the next decade however, as Speers said corps of engineers has already begun looking into a replacement.

“It’s getting long in the tooth,” Speer said. “It’s getting close to time for it to be replaced, and I believe we’re looking at plans to do so in the near future. But it’s still a vital piece of coastal equipment, and there’s really no way for us to get this work done otherwise. There are things like clamshell dredging that have taken place that you couldn’t do without a vessel like this. Not to mention that of the 10 most dangerous breaker bars in the U.S., Oregon has about eight of them.”

Until then, the Yaquina will continue traveling the northern end of the West Coast, keeping its waterways clear and safe for mariners.