This graphic provides examples of acceptable outdoor lighting under a proposed city of Yachats lighting ordinance, which the council gave preliminary approval to during its April 1 regular business meeting. 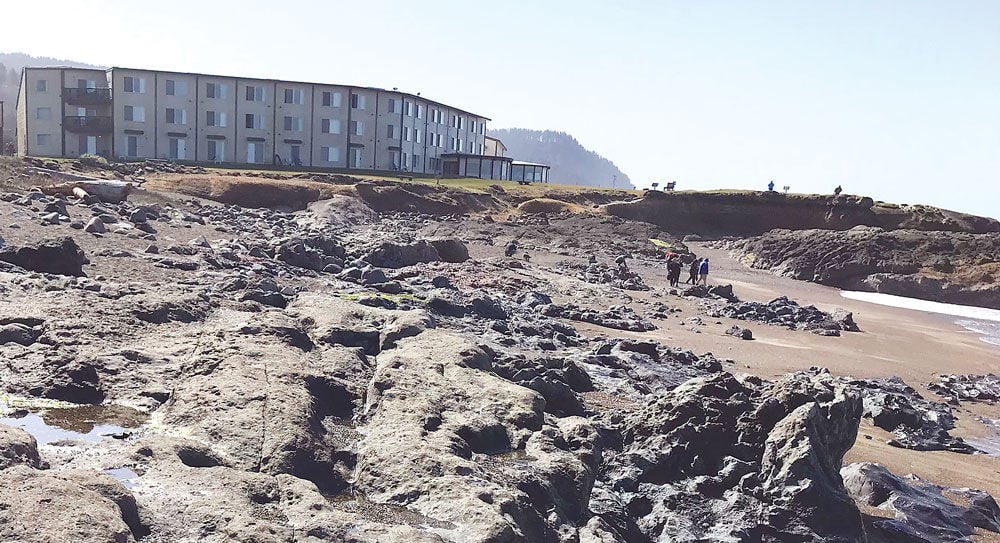 People flock to the shore late Tuesday morning outside the Adobe Resort in Yachats. The Yachats City Council gave preliminary approval to a proposed lighting ordinance, which places limits on the use of marine lighting at lodging destinations such as the Adobe, the Overleaf Lodge and the Fireside Motel.

This graphic provides examples of acceptable outdoor lighting under a proposed city of Yachats lighting ordinance, which the council gave preliminary approval to during its April 1 regular business meeting.

People flock to the shore late Tuesday morning outside the Adobe Resort in Yachats. The Yachats City Council gave preliminary approval to a proposed lighting ordinance, which places limits on the use of marine lighting at lodging destinations such as the Adobe, the Overleaf Lodge and the Fireside Motel.

Following a lengthy and public hearing and discussion on the issue, Councilor Ann Stott suggested a compromise that would help the council move past its major stumbling block regarding the regulations — the proposed banning of marine lighting.

Marine lighting, as defined in the ordinance, is light that illuminates the ocean near the surf, which some say has an adverse effect on the environment and its inhabitants, such as the lighting that illuminates the beaches on the property of three of the city’s most popular lodging destinations — the Adobe Resort and both the Fireside Motel and Overleaf Lodge.

After hearing from management at the the Fireside/Overleaf, as well as city residents for and against a complete ban of marine lighting, the council voted 3-1 in favor of passing the lighting ordinance. But rather than ban marine lighting altogether, they chose to limit their use to up to 9 p.m. during standard time, and 11 p.m. during daylight saving time. New marine lighting will be forbidden.

Mayor Leslie Vaaler was the lone dissenting vote against passing the ordinance, while the city’s newest councilor, Anthony Muirhead, abstained from the discussion and vote, citing his conflict of interest as general manager of the Adobe. In November, before his appointment to the council earlier this year, Muirhead spoke out against the banning of marine lighting on behalf of the Adobe.

During last week’s discussion, the council heard from Drew Roslund, an owner of the Fireside and Overleaf and an outspoken critic of the proposed marine lighting ban. He told the council his businesses’ marine lighting attracts guests, who he said contribute about 90 percent of the revenue to the city’s general fund through transient lodging taxes and other means.

“The guests come to Yachats because of the ocean,” Roslund told the council. “Many of them come for one or two nights a year, and if they come for one night, especially during the wintertime, to only be able to enjoy the visual aspect of the ocean for a few hours in the morning is not a great experience for them. We have the light out there, and the primary function of that light is to light up the ocean to enhance the experience for people coming to Yachats.”

The city’s lighting ordinance was developed and refined several times by the Yachats Planning Commission after initial versions were sent back to the commission by the city council for adjustments. The purpose was to focus outdoor lighting in the city to promote health, safety, security and productivity, to enhance viewing of the night sky and minimize effects of “trespass” lighting.

Prior to the vote, Vaaler noted the marine lighting talks didn’t provide for balance regarding environmental implicit actions of artificial light on the aquaculture.

Lance Bloch, chair of the city’s planning commission, possibly wary of the council sending the proposed ordinance back to the commission yet again, gave his two cents worth.

“I put it on you,” he told the council. “Decide what you want to do, but I urge you to take some action on the lighting ordinance as a whole.”

John Moore, who served as mayor until the beginning of the year, opined that the planning commission overstepped its bounds in regard to marine lighting, after praising the commission for its ability to tackle nuisance lighting. He likened people who moved near an already existing hotel or motel with bright outdoor lighting and complained about it to those who may move near an airport and then have issues with the level of noise.

Moore also noted that each of the hotels and motels with lighting issues existed long before any of members of the council or planning commission moved to the community.

“Four of you have moved to Yachats within the last six years,” he told the council. “Greg (Scott) has been here the longest, but even when Greg moved here those lights were shining from the Overleaf, the Fireside and the Adobe onto the edge of the surf line so that their guests could see the surf at night. When every member of the planning commission moved to Yachats, the same was true — those lights were here, they preceded and predated each of you.”

Once language is cleaned up, the council will formally approve the lighting ordinance, possibly as soon as its scheduled 2 p.m. April 21 regular business meeting.

To view the entire lighting ordinance informational packet used by councilors during the meeting, go to https://tinyurl.com/2uufaxua.

I hope they reconsider and completely ban marine lighting. Night time lighting damages marine ecosystems, a quick google for "environmental effect of marine lighting" gives numerous articles on the subject, such as this one...

Also, it appears most residents would prefer to have the beach in its natural state, not lit up by businesses.

Yachats' hotels will do just fine without lighting up the beach at night. Yes, they've been doing it for a long time. That doesn't mean it was ever a good idea. It's time to say ok, it was a mistake to allow that, and we need to be more proactive in protecting Oregon's coast.