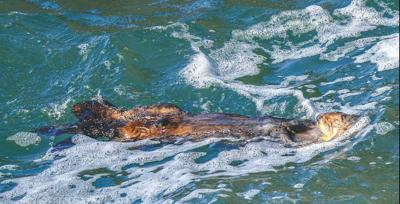 YAQUINA HEAD —Wildlife lovers and photographers were in thrall last weekend as a playful marine mammal that has not lived wild in Oregon in 115 years paid a rare visit to rocky headlands in north Newport.

There is no permanent, wild sea otter population in Oregon, though they were at one time abundant and might make a comeback if a group of tribal leaders and conservationists promoting their reintroduction is successful.

Every once in a while, a sea otter will make its way to the Oregon coast, likely a male otter from a reintroduced population in Washington, but finding no other resident rafts or potential mates, these pilgrims are bound to move on. Visitors to Yaquina Head Outstanding Natural Area have recently been treated to such sightings. Sea otters seem to genuinely enjoy putting on a show for people, and this one performed for sightseers and photographers for several days last weekend, and is reported to have been in the area for a week or longer.

According to Oregon Wild, there were 25 wild sea otter sightings in Oregon between 2008 and 2014.

The Elakha Alliance, a coalition formed in 2018 that hopes to promote reintroduction of sea otters in Oregon by about 2030, confirmed the sighting was in fact a sea otter, and not the river variety sometimes mistaken for their cousins, who take occasional saltwater dips.

After they were exterminated in the Pacific Northwest by fur hunters at the beginning of last century (the last native Oregon otter is thought to have been killed in 1906 at Otter Rock), sea otters were successfully re-introduced to southeast Alaska, British Columbia and Washington in the 1960s.

In the early 1970s, 93 otters were translocated from Alaska’s Aleutian Islands to the Oregon coast, however, population surveys reported declining numbers until researchers could only locate a single otter by 1981.

Two studies are currently underway into the feasibility of another attempt at reintroduction in Oregon, one by Elakha (a phonetic adaptation of Chinook for otter) and another by the U.S. Fish and Wildlife Service. The latter, mandated under the 2020 Appropriations Act, is due to Congress by the end of this year. Elakha released a draft report of its study in late August with a final version expected in January 2022.

Elakha’s study, led by six biologists, predicted reintroduction would be successful with the proper measures in place (much has been learned about coastal ecology since the early 1970s attempt), and highlighted Yaquina Bay estuary as one of three that “appear to have an optimal combination of prey resources (clams, crabs) and resting habitats (eelgrass beds and tidal creeks).”

Sea otters are voracious predators, and prior to their extermination were keystone species in the Oregon coast ecosystem, as well as an important part of practical and spiritual life for Indigenous people. The website for the Oregon Coast Aquarium, which has its own resident sea otters, notes, “Otters control the population of sea urchins, which in turn feed on the giant kelp forests offshore. Without the otters to maintain this ecological balance, the urchin population managed to destroy many of the underwater forests and the habitat they provided for innumerable species.”

A new otter population would also compete at some level with the fishing fleet, and a group of 24 maritime industry organizations and agencies sent a letter to U.S. Fish and Wildlife urging it to include an economic assessment in its feasibility study. The federal agency has said its study will not make a recommendation regarding whether or not reintroduction should happen, merely if it could.

Elakha’s report identified potentially impacted prey species, including Dungeness crab, red rock crab, razor clams, butter clams, Gaper clams, littleneck clams, cockles, mussels, ghost shrimp, and red and purple sea urchins. It notes that for some fisheries, such as urchin dive fisheries, “there is good reason to project a substantial negative impact of sea otter recovery,” but for others, such as crab and shrimp, “it is far from clear whether there would be a negative impact, or how substantial such an effect would be.”

The majority of sea otters live in Alaska’s Aleutian Islands (an estimated 73,000 in the whole state in 2006). There are estimated to be between 2,000 and 3,000 thousand in both Washington and California. The closest population resides in Washington’s Olympic Peninsula.

An Elakha Alliance spokesperson told NPR earlier this month, “Success for us looks like a couple of hundred otters, not a couple of thousand.”