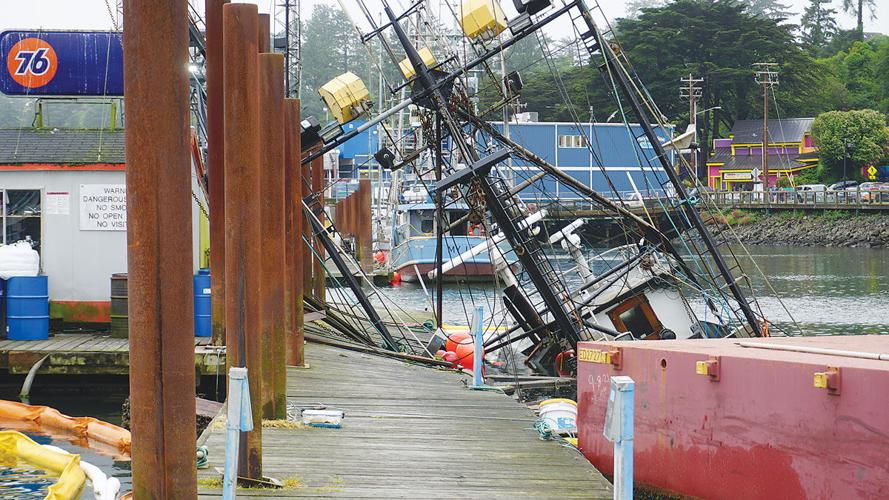 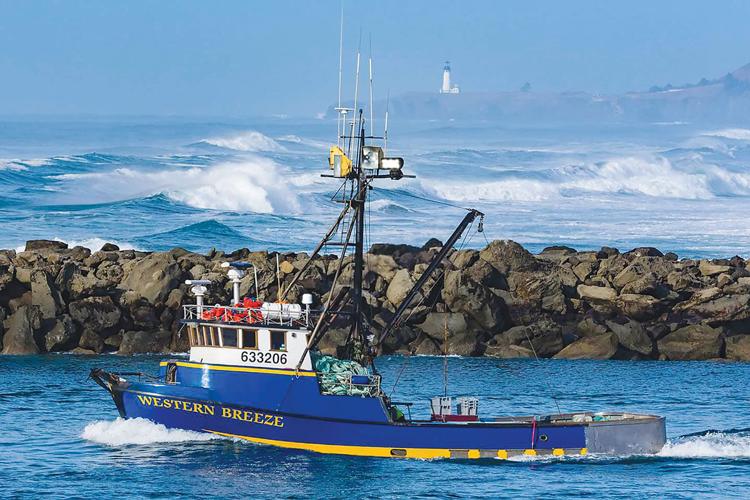 A 2017 photo shows the F/V Western Breeze headed out of Yaquina Bay to catch crab. The year prior, the vessel was featured on the Discovery Channel’s “Deadliest Catch: Dungeon Cove.”

A salvage crew using the Port of Newport’s crane and a diver boat work at Port Dock 5 to raise the F/V Western Breeze last Friday after it sank the previous afternoon. (Photos by Kenneth Lipp)

A 2017 photo shows the F/V Western Breeze headed out of Yaquina Bay to catch crab. The year prior, the vessel was featured on the Discovery Channel’s “Deadliest Catch: Dungeon Cove.”

A Newport fishing vessel featured on a spinoff of the documentary series “Deadliest Catch” is back on top of the water and bound for dry dock after sinking next to the Port Dock 5 fuel station on June 9.

The Newport Fire Department was dispatched at about noon to a report of a boat sinking at the Bayfront, and firefighters arrived to find a 58-foot commercial fishing vessel tied up near the fuel dock listing to its port side and sinking below the water.

Firefighters first made sure there was no immediate danger to life, then worked with personnel from the Port of Newport and a motor lifeboat crew from nearby U.S. Coast Guard Station Yaquina Bay to set up containment and absorbing buoys around the vessel.

Fuel was disconnected and power was shut off to the entire dock. Electricity was restored for other vessels at about 2:30 p.m.

“Fuel spilled was kept to a minimum due to the quick actions of responders,” according to a fire department press release, which reported no injuries as a result of the incident. Newport Police Department, the Lincoln County Sherriff’s Office, Oregon State Police, Central Lincoln People’s Utility District and Carson Oil Company — which operates the fuel station — all assisted with the response.

Depoe Bay Fire District provided coverage while Newport’s single on-duty engine was on the scene at the Bayfront along with one heavy rescue vehicle, two chief officers and six firefighters.

In listing and sinking to its port side, the boat collided with the dock next to the fueling station. Port of Newport Director of Operations Aaron Bretz said despite the displaced planks, there was no damage to the fuel lines that run within the dock. Fuel remaining in the vessel was pumped out prior to beginning recovery.

Bretz said there was no damage to the float on which the fueling station is located, and it remains operational. He said the port was not currently allowing mooring at, and would need to conduct a careful assessment of, its adjacent section of dock, and this would likely have to be replaced. Bretz could not say when those repairs might be underway.

The Western Breeze is owned by Gary Ripka, whose family also operates the Tabitha and the Jeanoah and in 2016 was featured on the Discovery Channel’s “Deadliest Catch: Dungeon Cove,” a Newport-based spinoff of the Emmy-winning series. Ripka purchased the Western Breeze, previously named Miss Melanie, as a bank repossession in 2004 and completely rebuilt it.

Ripka told the News-Times the vessel sank after a "green" crew member, who had only been out for three trips on the Western Breeze, turned off an auxiliary pump and left the check valve open, causing water to back flow and quickly fill the hold. When the boat began sinking — which only took about 15 minutes, Ripka said — that crew member literally ran from the scene. He declined to identify that crew member by name.

The boat's captain, David Stringer, was briefly away to resupply the vessel for another fishing trip that evening, Ripka said, and not responsible for the accident.

"He was doing his job," Ripka said.

The sinking left the Western Breeze mostly submerged, with just the masts, wheel house and edge of the starboard side above water. Ripka’s insurer had a salvage crew, including divers, at the dock on Friday morning, June 10, and by early afternoon they were using the port’s barge-borne crane to attempt to raise the vessel.

Recovery was slow going, but by late Saturday, the Western Breeze was again floating on its own. It was taken to the shipyard at the Port of Toledo.

Ripka said the hull of the vessel was sound, but millions of dollars of equipment inside was completely ruined. The insurance company will now have to determine whether repair and replacement is feasible, or if the boat should be deemed a total loss.

He said his family was still absorbing the potential loss of the boat with which he made his name in the Pacific Northwest fishing community.

"The closest thing I can compare it to is losing a loved one," Ripka said. "Or building your family home and then watching it burn to the ground."

Editor's note: A previous version of this article referred to Ripka as owner of the F/V Redeemer. Ripka said he sold that Redeemer more than one year ago.