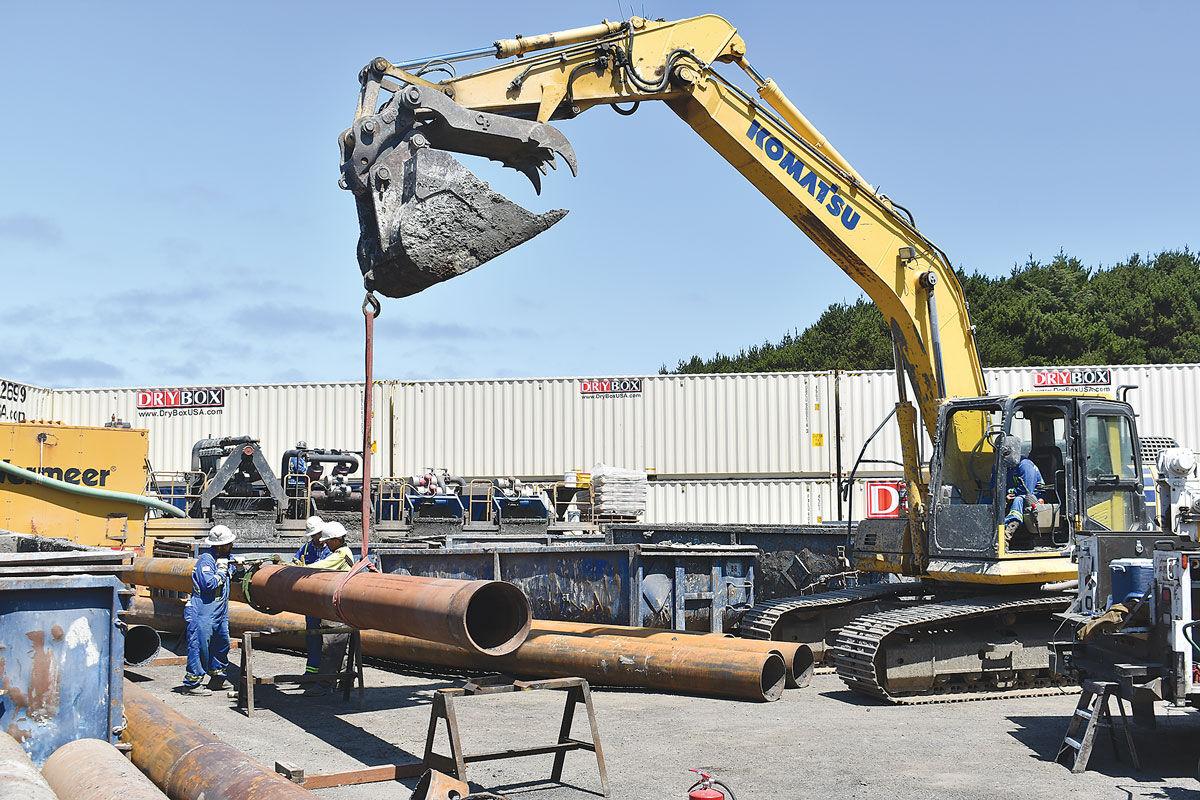 An excavator lifts up a section of casing used to keep underground tunnels stable so that workers can weld it. 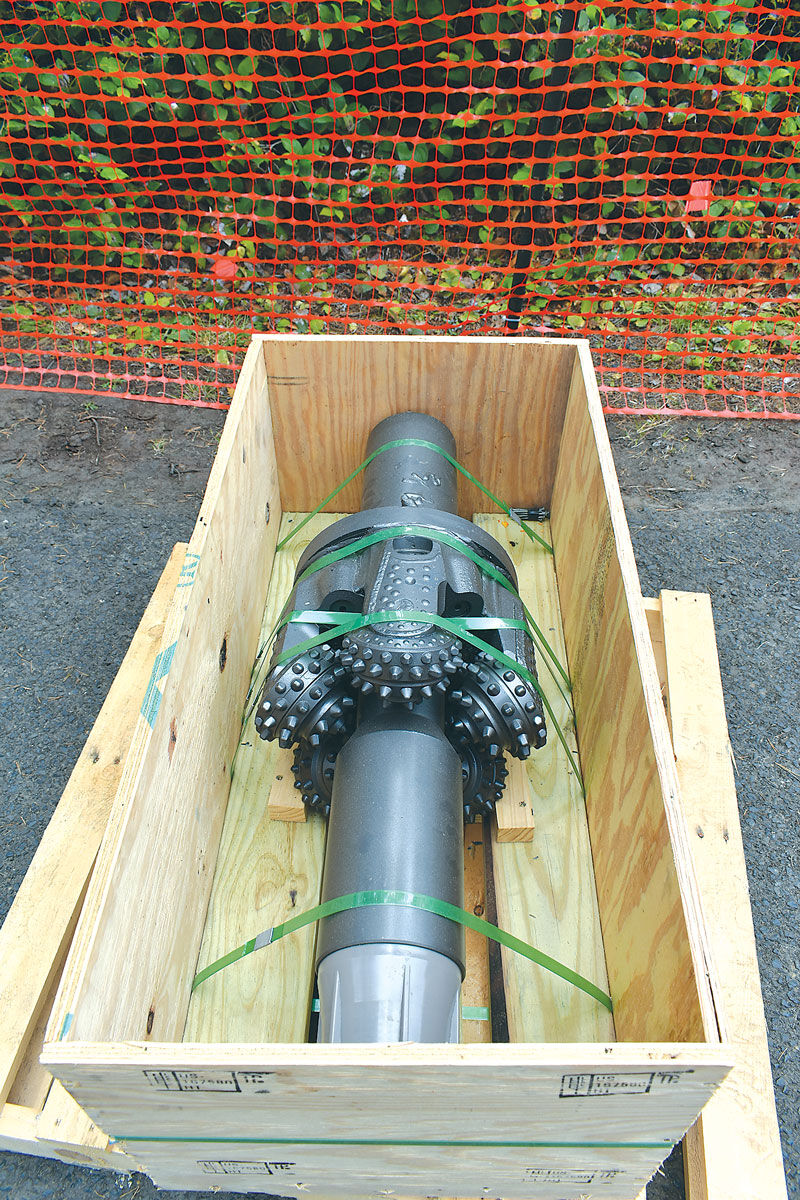 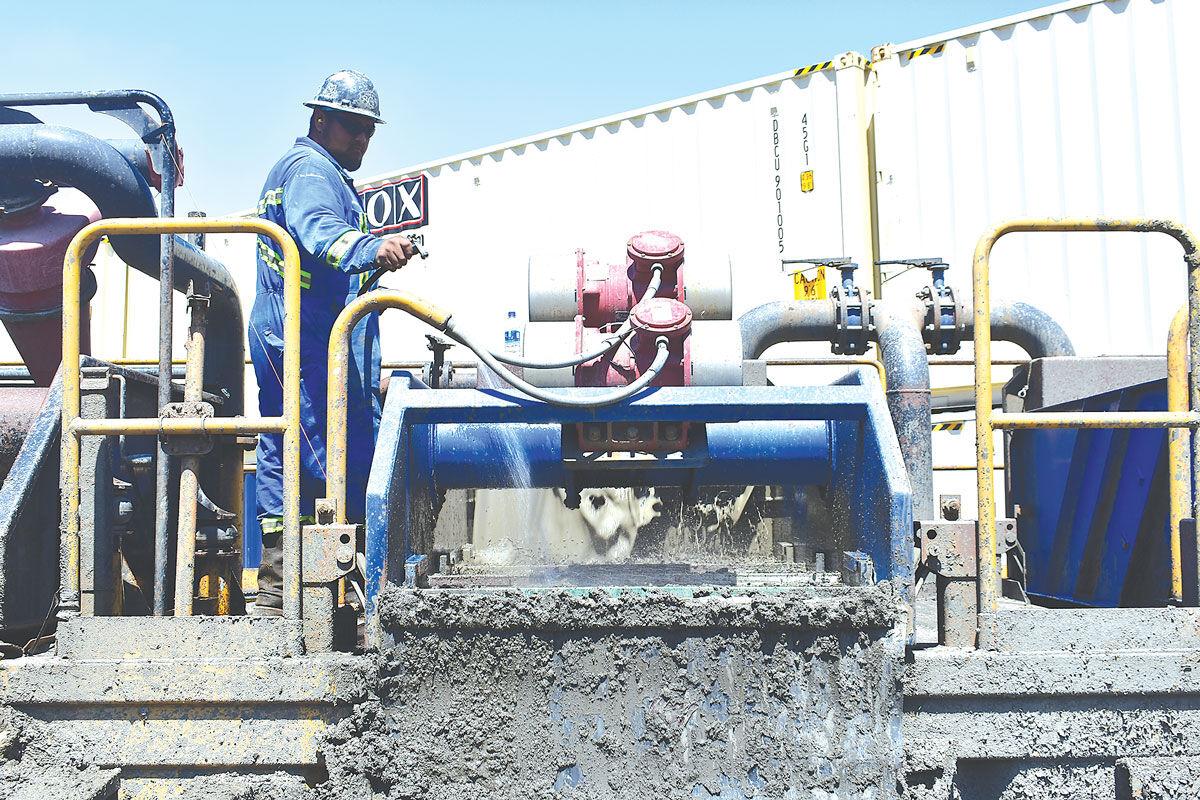 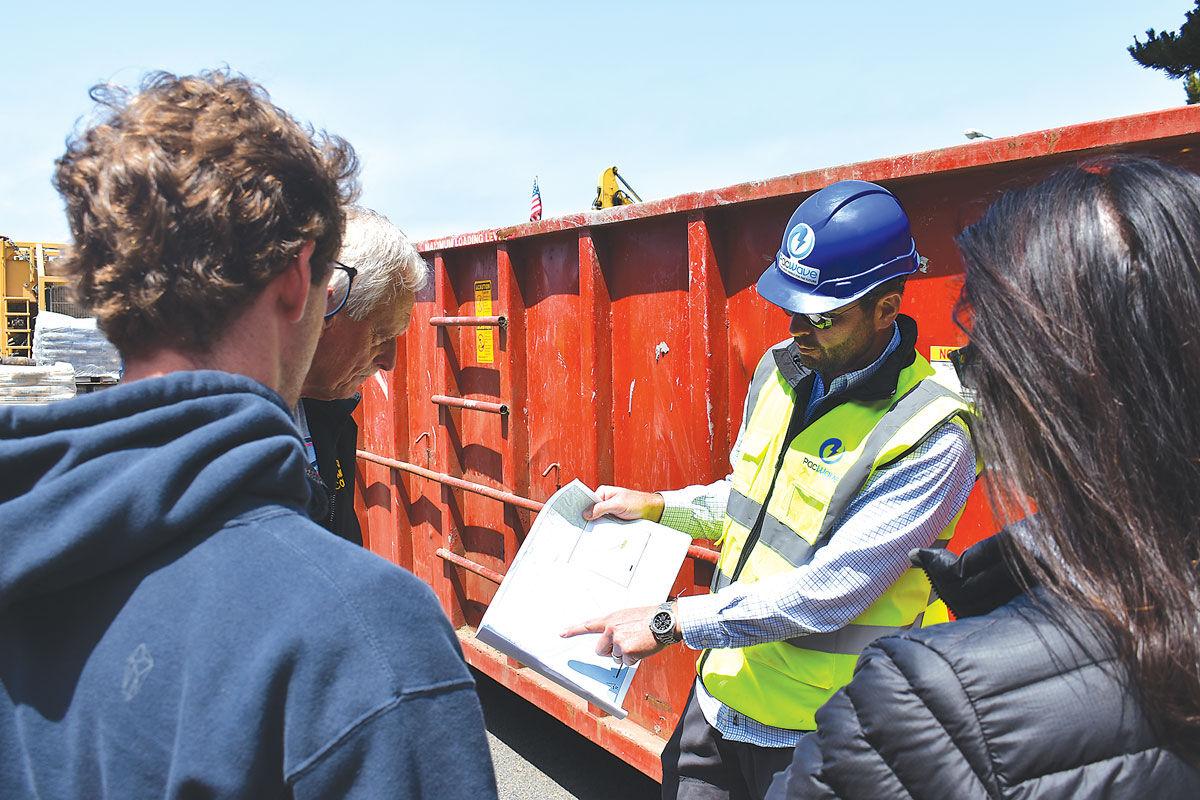 Justin Klure, a contractor for the PacWave South project, explains the scope of the project to a group of visitors at an open house held Saturday at the Driftwood construction site. (Photos by Mathew Brock) 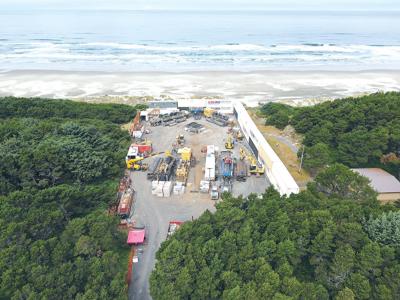 Construction workers at Driftwood Beach State Recreation Site stand by as they prepare to operate a massive auger attached to an underground drill. (Photo by Mathew Brock)

An excavator lifts up a section of casing used to keep underground tunnels stable so that workers can weld it.

Justin Klure, a contractor for the PacWave South project, explains the scope of the project to a group of visitors at an open house held Saturday at the Driftwood construction site. (Photos by Mathew Brock)

SEAL ROCK — From curious Lincoln County residents to Oregon State University engineering students, dozens of people from Lincoln County and beyond were shuttled to Driftwood Beach State Recreation Area on Saturday to get an up-close look at the ongoing construction of the PacWave South project’s beachside landing site.

Half the construction equipment at the site was shut down Saturday for an open house, with visitors being brought in from the Seal Rock Fire Station and given tours from PacWave staff, engineers and contractors who explained just what goes into an underground and subsea construction project of this scale.

When complete, Driftwood will house the PacWave South facility’s beachside landing point, which will connect the seven miles of undersea cable that extend from the projects offshore testing facility to its onshore utility monitoring facility across Highway 101 at Wenger Lane.

Project manager Steve Donovan of The HDD Company, a company that specializes in horizontal directional drilling, was one of several representatives on site who took some time Saturday to show News-Times staff the various techniques and equipment required to drill the underground conduit line.

A large hammer-like piston is attached to hollow metal protective casing and hooked up to an air compressor that helps hammer the casing through the ground in 260-foot sections. Once the casing is secured, a drill made from non-magnetic steel is run through it to remove the Nye mudstone, a geological material unique to this part of the Oregon coast.

“The first thing we do is put on a protective casing because we’re going through this beach sand, and we want to keep the drilling fluid we use from soaking out into that sand,” Donovan said. “We also want to keep the sand from caving in on our hole. Because of that, the neighborhoods around here will occasionally hear a ‘pound, pound, pound’ like a pile driver.”

A special muddy drilling fluid made from bentonite and water is used to filter out the drilled material, which is then run through the casing, back to the construction site and separated from the drilling fluid via a centrifuge, with the fluid then being recycled for continued drilling. Bentonite is an absorbent clay material found in everything from cat litter to women’s makeup, and is commonly used for similar drilling operations.

“The drill fluid is sprayed out and washes the teeth of the drill, jetting into the mudstone formation and eroding it away,” Donovan said. “The other thing it does is it captures the cuttings, engulfs them, and then it gets flown out the other end. The bentonite acts sort of like the bucket on an excavator. It cuts the material and holds it in the bucket until it comes out of the hole.”

From above ground, the construction crew uses magnetic fields to keep track of where the underground line is located.

“It’s how we steer. We steer in our own little magnetic field, and that tells us where we’re at in reference to the world’s magnetic field,” Donovan said. “Once we get out past the beach and can no longer run a magnetic coil, we’ll basically have to run off the Earth’s magnetic field out about a mile.”

Once the landing point is complete, underground conduits will be run to the nearby monitoring facility, while subsea conduits installed via a specialized barge will run seven miles west to the offshore testing facility.

The construction crew for the Driftwood portion of the project includes individuals from around the country, many of whom have experience working in oil fields or similar lines of work. The construction crew does include local professionals where it can, however, with Donovan noting Saturday that one of the project’s welders is from Lincoln County, while much of the non-specialized equipment was obtained from Oregon companies.

Construction at Driftwood is expected to last another 7 to 11 months, and for that duration, visitors are asked to stay away from the construction site unless told otherwise, though the nearby beach will remain open. Donovan said he expects to hold a few more open house events over the course of the construction.

The Oregon Parks and Recreation Department advises visitors seeking parking or beach access to consider using one of the other nearby state parks instead, such as Seal Rock State Recreation Site, Governor Patterson Memorial State Recreation Site and Brian Booth State Park. All are located less than five miles away from Driftwood.

For updates on the construction or more information on the PacWave project, go to pacwaveenergy.org.