You are the owner of this article.
Edit Article Add New Article
You have permission to edit this article.
Edit
Welcome, Guest
Home
News
Community
Sports
A & E
Business
Food & Beverage
Obituaries
Opinion
Classifieds
Video
Quick Links
Share This
1 of 5 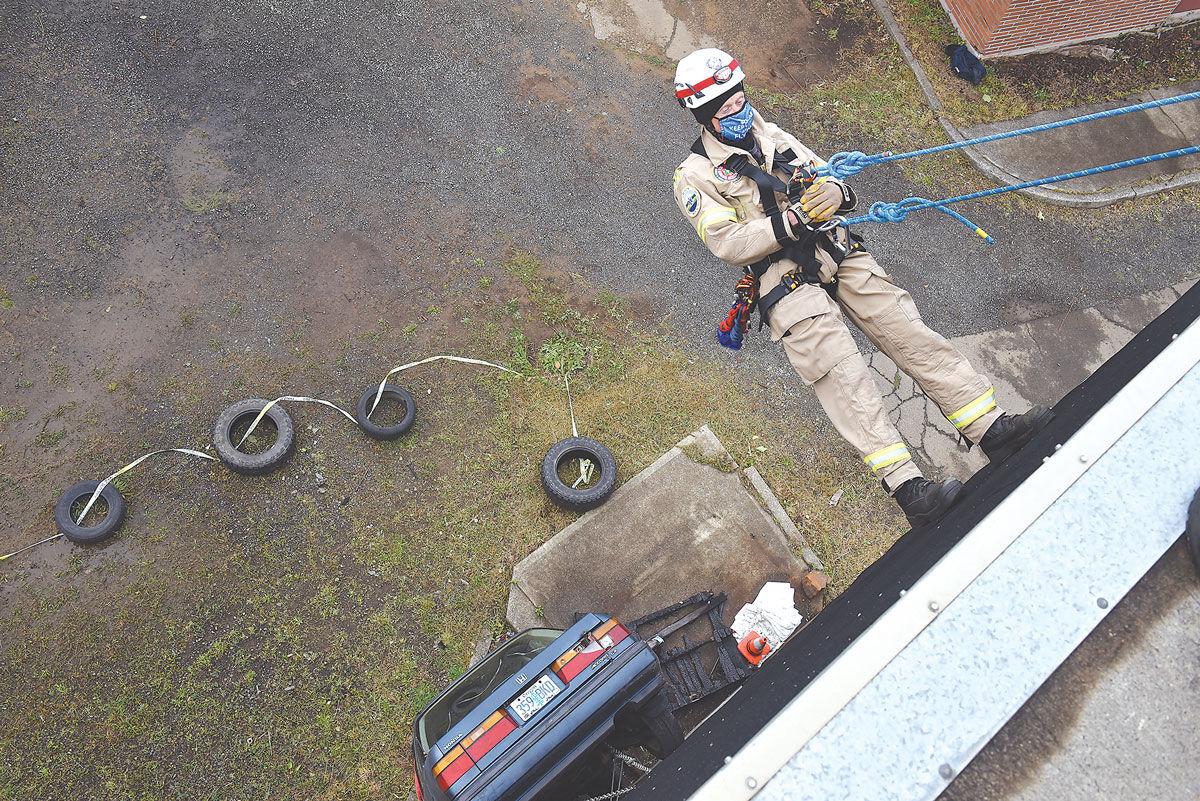 Lincoln County Technical Rescue Team members train and operate in every rope rescue role. Roy Hanson, of Nestucca Rural Fire and Rescue, is lowered down the wall at the team’s training tower on Nye Street in Newport. In the next photo, Hanson works the ropes with Shannon Brecik of Toledo Fire Department as another training rescuer goes down. (Photos by Kenneth Lipp) 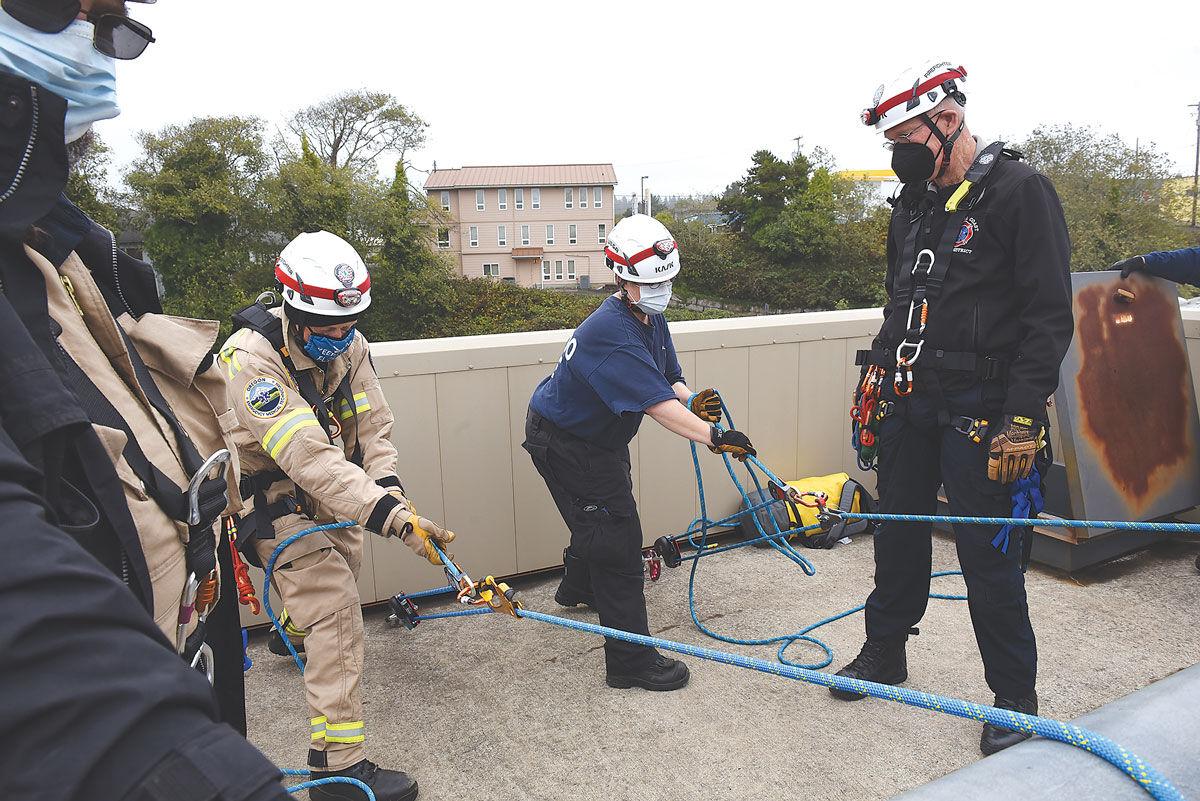 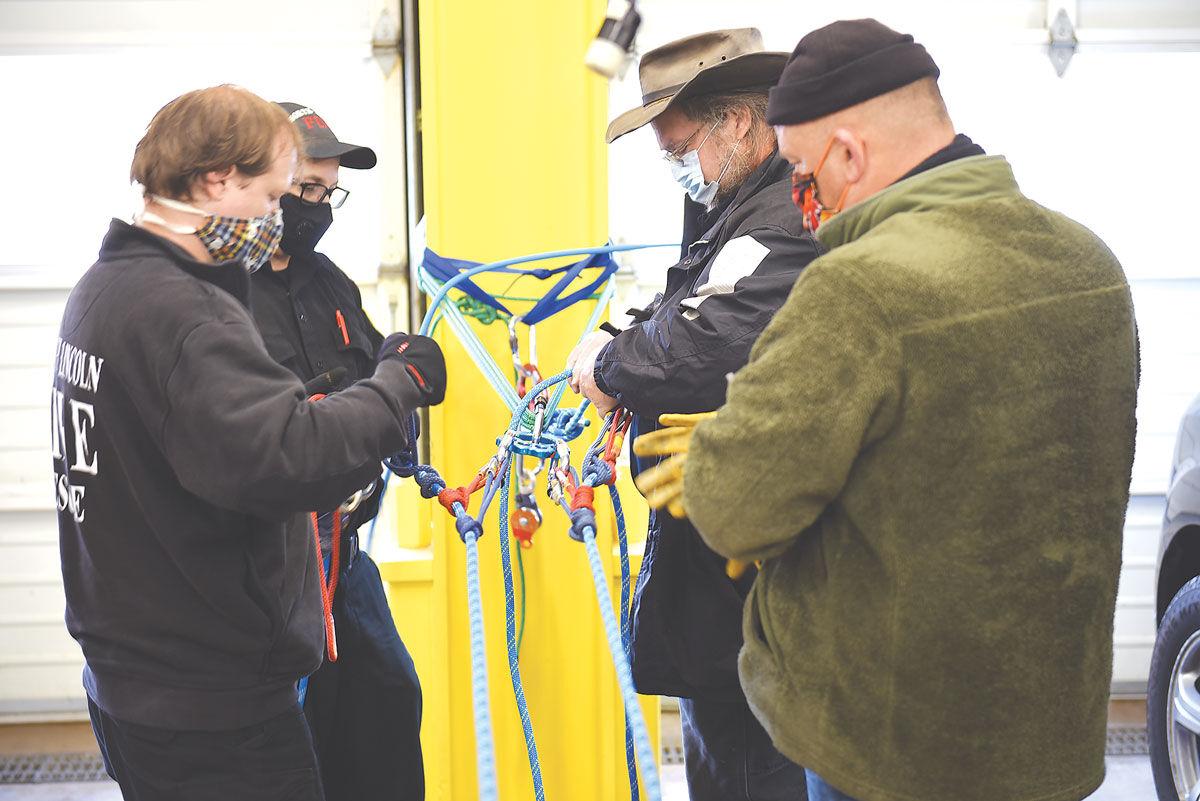 Four members of the Lincoln County Technical Rescue Team train in the Newport Fire Department vehicle bay Saturday, working to perfect their rigging of a high-line system. The system, one of the most complex executed by the team, stretches ropes across a span, allowing a rescuer to move back and forth and up and down with pulleys. (Photo by Kenneth Lipp) 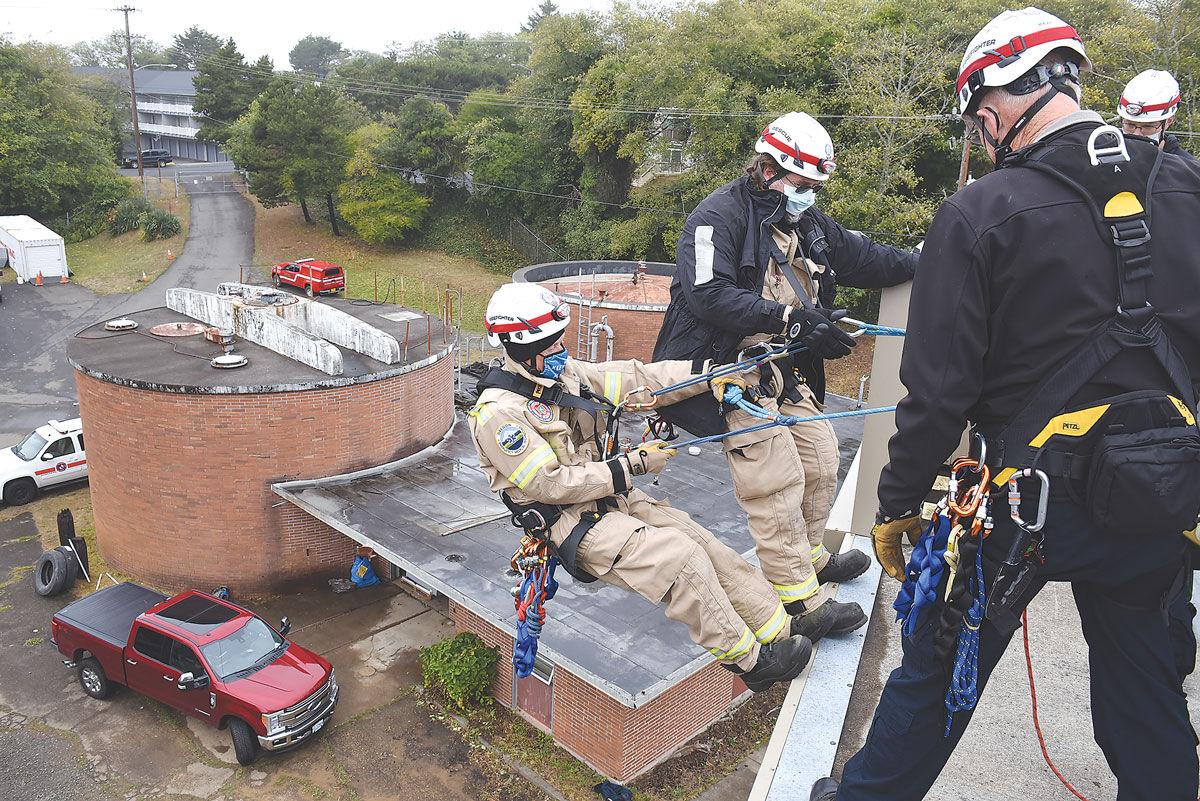 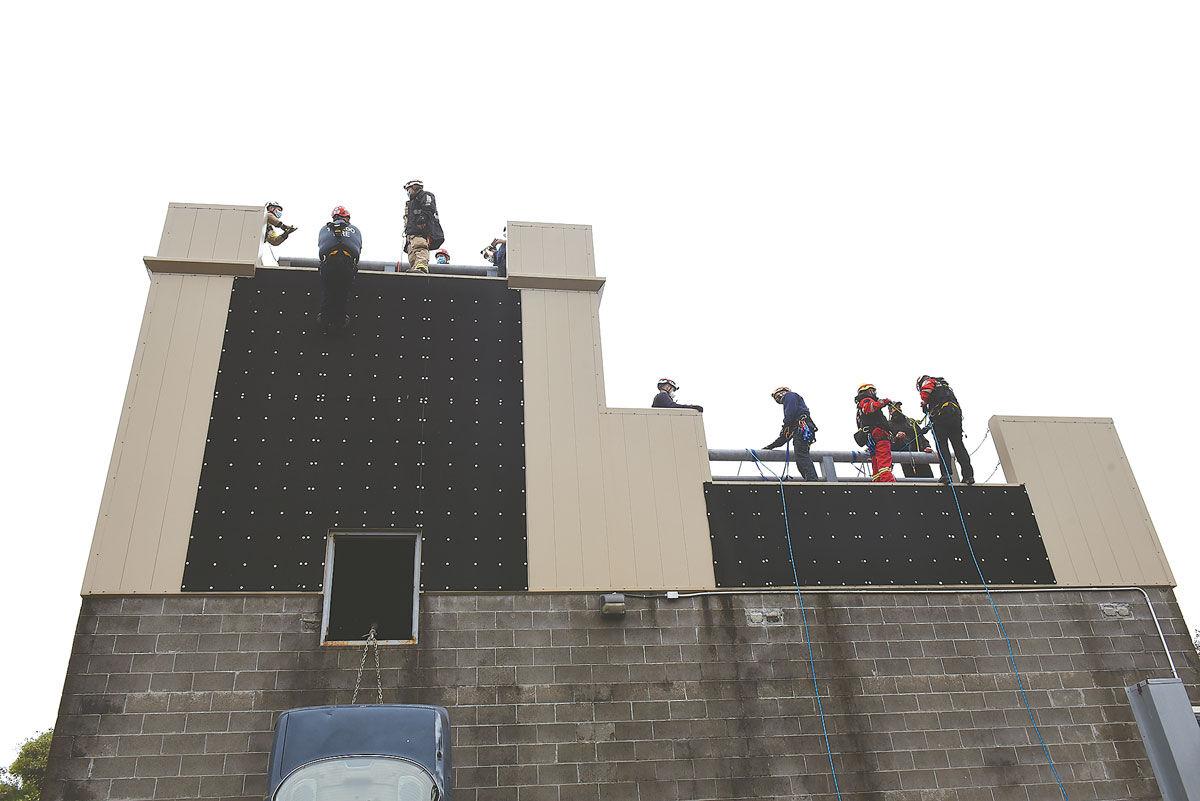 Lincoln County Technical Rescue Team members train and operate in every rope rescue role. Roy Hanson, of Nestucca Rural Fire and Rescue, is lowered down the wall at the team’s training tower on Nye Street in Newport. In the next photo, Hanson works the ropes with Shannon Brecik of Toledo Fire Department as another training rescuer goes down. (Photos by Kenneth Lipp)

Four members of the Lincoln County Technical Rescue Team train in the Newport Fire Department vehicle bay Saturday, working to perfect their rigging of a high-line system. The system, one of the most complex executed by the team, stretches ropes across a span, allowing a rescuer to move back and forth and up and down with pulleys. (Photo by Kenneth Lipp)

A highly trained group of emergency personnel that conducts some of the most difficult, perilous rescues in Lincoln County observed a decade in service this year.

The Lincoln County Technical Rescue Team was formed in 2011 with former Central Oregon Coast Fire & Rescue Chief Dennis Cannon as its principal organizer. It’s made up of members of all the county’s fire departments and is called in when first responders need to access people in very hard-to-reach spots, such as the cliffs at Yaquina Head or inside Devils Punchbowl.

Current team leader Andy Parker, a full-time firefighter on the Newport Fire Department, said the idea was to create a dedicated unit with enough trained personnel to safely execute such complex missions.

The bare minimum for a rescue team call is five members, and they prefer to have at least 12 responding, Parker said. No individual department can really afford to pull that many from a shift. Newport, for example, typically only has four full-time personnel on duty.

The rescue team responds to calls throughout the county in four geographic divisions, but team members from the north, south, east and west divisions might respond to calls at any location.

“We don’t really belong to one department,” Parker said. “It’s a team of personnel that comes together to perform a task-oriented job … We work for the incident commander on scene. It could be a fire chief or an officer on a rig from another department.” The team follows policies and procedures approved by the Lincoln County Fire Defense Board, which is made up of the chiefs of all eight county fire departments.

Parker said the team first organized with 12 to 15 people who went through the initial 52-hour training and began conducting rescue drills together. Six months after their first drill — by which time the team had 18 members — they got their first call. An ATV rider had gone off the road at Mt. Baber and ended up about 75 feet down a steep hillside.

They successfully rappelled to the victim’s location, stabilized him and brought him to a waiting ambulance. “That was a learning experience. It didn’t even really fit what we’d been training for,” Parker said. “It threw a bunch of obstacles at us.”

Because the maneuvers they perform are so complex and need to be second nature in an emergency situation, the team dedicates a lot of time to training, and members remain on a probationary status for their first year until they have performed enough drills and actual rescues to be considered proficient.

The team holds a minimum of four hours of training a month — 91 hours have been offered so far this year — and since the team’s inception, members have dedicated 7,400 person hours to maintaining and improving their skills (all of that in addition to their regular firefighter duties and training). All to prepare for an average of five calls per year.

“We have a very low-frequency, but high-risk job,” Parker said. As of last week, the technical rescue team had responded to 69 calls since 2011. Those calls resulted in the rescue of 47 people in peril, Parker said, noting that figure includes the efforts of the agencies with whom the team works.

In June of 2020, the team was called to a report of surfers stranded on the cliffs on the south side of Yaquina Head. The team had begun cross-training the previous year with the Coast Guard, which responded to the scene with two lifeboats and a helicopter whose rescue swimmer had gone through class with the team.

Parker went over the cliff himself that day, and he said they’d heard reports of two to five stranded people. They typically descend prepared to rescue one or two. Parker found seven people, including four children.

Because of the cross-training, Parker was able to communicate with the Coast Guard swimmer via hand signals and call for the proper lift equipment, as well as brief the person being rescued. “As soon they come down, I’ve already briefed the patient, the rescue swimmer didn’t really have to tell them anything, it was hook them up and go,” he said.

All seven were safely brought to the top one at a time, evaluated by paramedics and reunited with grateful friends and family.

Earlier this year, a woman fell down the eroded cliff at Jump-Off Joe and onto the crumbled concrete slabs of the former condominium complex, and the team had to take a different tack. Working with the Newport Fire Department, they extended a ladder truck’s ladder over the edge to use as a sort of crane to lower a rescuer.

“That’s one of the things we train with a lot. There’s times it’s almost like having our own helicopter in that we can position it and do what we want, although we are weight limited with that,” Parker said.

The wide variety of terrain and circumstances to which the team responds is another reason for the frequent training. Members must be familiar with a multitude of complex knots and hardware, as well as each individual rescue task. For every person descending at the end of a rope, there are at least four working a system of knots, pulleys and other hardware above.

One of the most complex rope set-ups is the high-line system, Parker said, which the team practiced rigging during a training on Sept. 18. Ropes are stretched across a span, and a pulley can be moved along them and used to lower and raise personnel. The group just got done performing the maneuver in real life at Devils Churn south of Yachats, attempting to recover the body of a man who fell into the narrow, turbulent inlet. The attempt was unsuccessful.

Since 2011, the team has been called in to recover the bodies of 10 deceased people.

In addition to the Coast Guard and county emergency agencies, the team has also trained with ropes units from the Oregon National Guard, Oregon State Police SWAT team and Georgia-Pacific’s emergency response team. They’ve also had two members of Nestucca Rural Fire and Rescue training with them, whom they consider team members, Parker said.

The regular training and need for trust between members has bred deep camaraderie, Parker said, and the relative excitement and novelty of the training and calls keeps members engaged. “We never have anyone complain about training,” Parker said. “It’s more like, ‘OK, I’ve got my hours, when can I get more.’”

After they’ve completed their year on probation, members are brought into a circle with the rest of the team and asked if they are ready to work independently. “Then we go around the circle and everyone else asks, ‘Do you trust this person? Do you think they’re ready?’” Parker said. “It’s a confidence builder to be told by your peers, ‘I trust you with my life.’”

Blake Wisham has been a Newport firefighter for almost two years. As soon as his one-year probation on the department was up, he joined the rescue team and will soon be off of probation again.

“Everyone there is very dedicated. The senior members are masters of their craft,” Wisham said. “It’s just a different mentality than what we see in some of our work areas. Everyone there is united under the same goal without having to tell them, ‘This is our goal. This is our objective.’”

In recent years, the team has looked to expand its operations to include the cross-training with the Coast Guard, as well as planned trainings on tower rescue — safely going up and bringing someone back down — and rescues from collapsed structures. They’re able to conduct most of their trainings in house, as three team members, including Parker, were certified as rope technician instructors in 2016.

There are currently 24 members on the rescue team’s roster, and three more who want to join attended the training last Saturday. Parker said they’re always looking for volunteers — they’d like to reach a membership of 30 — and are always grateful for donations.

The team maintains about $100,000 in specialized equipment, and all of its “soft gear,” such as ropes, has a lifespan of only 10 years. The team received a $50,000 grant upon formation and has received additional funding on multiple occasions from the Confederated Tribes of Siletz Indians. They also ask participating fire departments to contribute $1,500 a year (though not all do, Parker said), and Pacific West Ambulance contributes $1,500 annually.