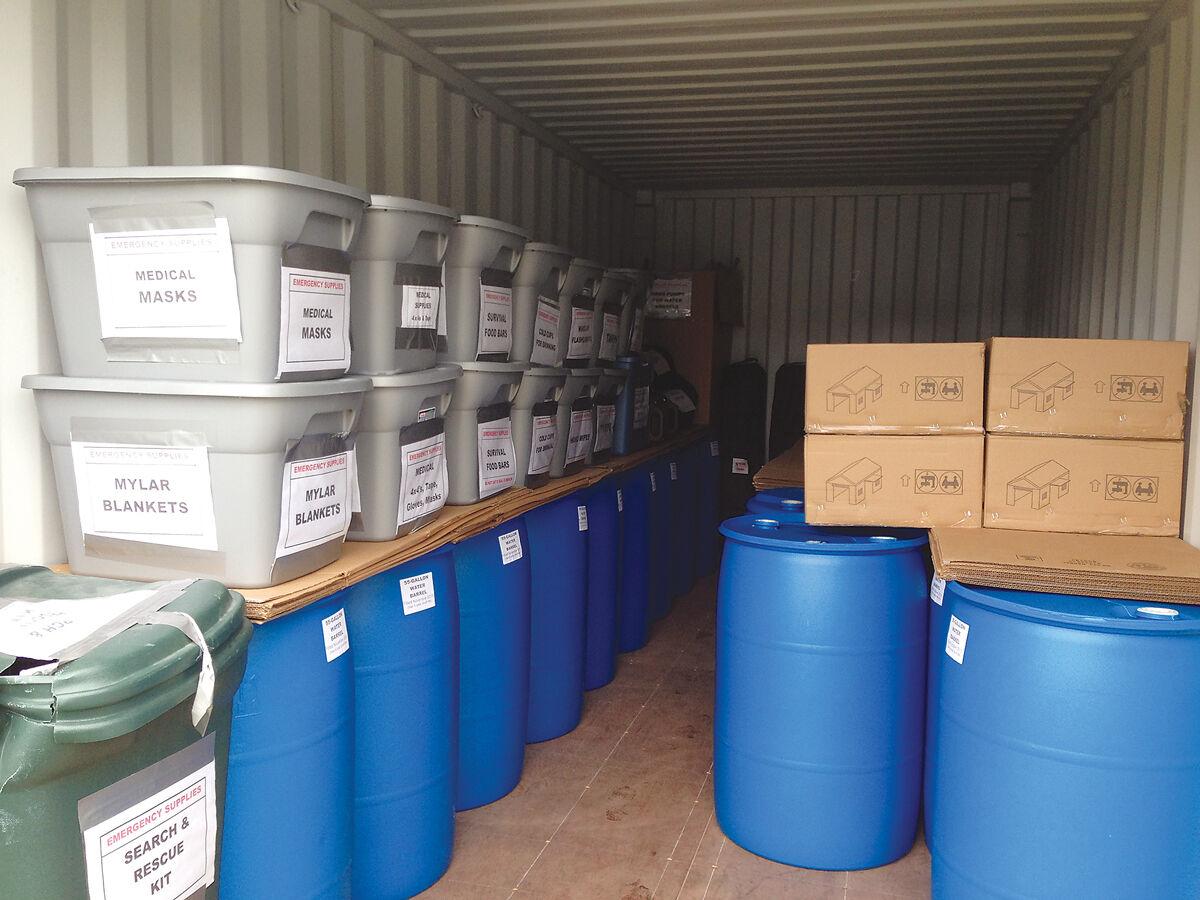 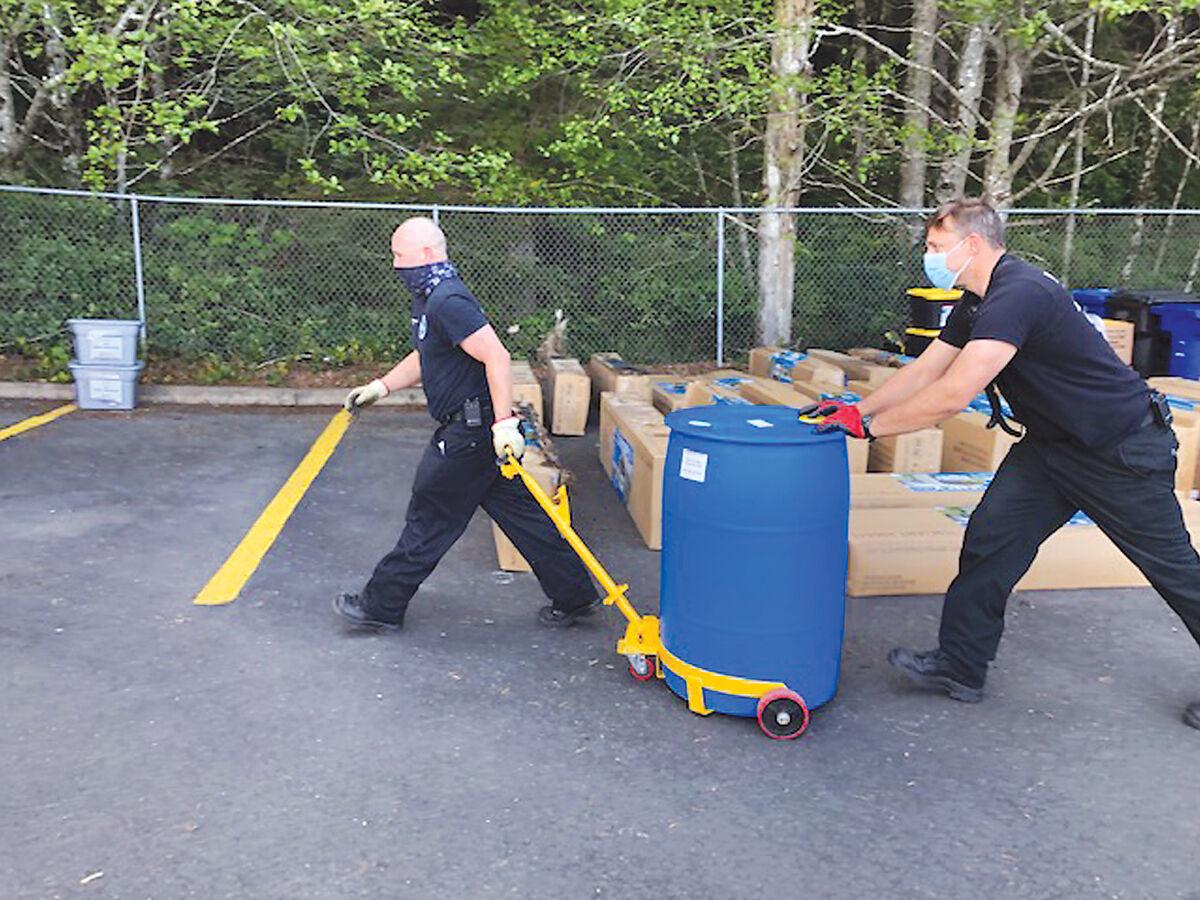 North Lincoln Fire and Rescue firefighters help change out water barrels at the disaster caches in Taft during a work party in early May. (Courtesy photos)

North Lincoln Fire and Rescue firefighters help change out water barrels at the disaster caches in Taft during a work party in early May. (Courtesy photos)

A major seismic event at the Cascadia Subduction Zone could strand most Pacific Northwest coast residents for weeks wherever they are when the earthquake and tsunami hit.

At about 9 p.m. on Jan. 26, 1700, an estimated magnitude 8.7 to 9.2 earthquake rippled the Earth through coastal villages from northern California to Washington. The offshore quake resulted in a tsunami, bringing a series of flooding waves to the coast throughout the night, which caused the most significant damage and loss of life.

Scientists have determined that such events historically occur in the Pacific Northwest every 500 years, on average, with smaller magnitude 8 events every 200-300 years. According to the Pacific Northwest Seismic Network, “the odds over the next 50 years range from about one in three for a magnitude 8 in southern Oregon to about one in eight for a magnitude 9 spanning the entire subduction zone.”

“We don’t know when it’s going to happen, but we know it’s going to happen eventually,” Sue Graves, safety coordinator for the Lincoln County School District, said. If it happens when students and staff are at school, they’ll be faced with the same challenge as people in homes and businesses — surviving for an extended period of time on whatever is there. Because of the anticipated damage to roads inland, it will probably be weeks before outside help arrives to the coast, and local damage could isolate residents by neighborhood and block.

“We can really expect that basic services and basic needs are going to be really difficult. Roads will be closed, water systems won’t work, communications won’t work, we’re not going to be able to go to the store to buy food,” Graves said.

Graves holds a master’s degree in security studies from the Naval Postgraduate School, and in her off time from the district, she contracts with other entities as an expert consultant. She recently authored an “Earthquake and Tsunami Community Disaster Cache Planning Guide” for the Oregon Department of Geology and Mineral Industries.

The text is an exhaustive treatment of what to store and how to store it to prepare for a disaster, best practices Graves has been implementing at local schools for the past eight years.

In 2013, the Lincoln County Board of Commissioners amended its qualifications for county disaster preparedness grants at Graves’ request, allowing schools to apply. She used the $2,500 grant to establish the school disaster caches, one in each region at first, and now there’s one near almost every school in the district. A new cache was added this year at Yaquina View Elementary School.

Graves said the survival troves are a collaborative effort between schools and the fire departments, police departments, and cities where they are located. They held a work party in early May with North Lincoln County Fire and Rescue, Lincoln City and Oregon Coast Community College to stock and refresh the caches at the Taft schools.

Supplies are stored in 20-foot steel Conex containers, stocked according to the number of staff and students at each school. They’re not all uniformly equipped, as funding for the project has varied over the years, and Graves said they are still working to meet some supply-level goals.

The latter, Graves said, is the most critical and the most difficult to store in adequate quantities. The Federal Emergency Management Agency recommends coastal residents keep two weeks worth of water in their homes to prepare for a Cascadia event, though the agency believes only a small majority have even a three-day supply.

“Water is hard to cache,” Graves said. “We store it in 55 gallon barrels, add a purifier that makes it last for five years, and we aim to have about three days worth for every person.” At Oceanlake Elementary, for example, they have 16 55-gallon barrels, about four days worth of drinking water for the school’s 450 staff and students.

To supplement that supply, they also have individual water filter straws for each person. The straws are about the size of a finger and can be used to safely drink from a natural source like a stream (not one contaminated by a tsunami) or rainwater. Graves said they also hoped to be able to salvage pots from school kitchens to boil water for safe drinking, and they will soon purchase a gravity-fed Lifestraw Community filter, which can filter large quantities of water without electricity.

Graves lauded the contribution of local emergency agencies and municipalities, noting that the caches are a potential lifeline for everyone. “If school isn’t in session, emergency agencies can access those supplies for the community’s needs,” she said.

The county disaster preparedness grant remains the core funding for the project, though they have added other sources as well as benefited from the generosity of community members. When one woman learned the Newport caches were in need of hats, she offered to knit them and asked Graves how many were needed. She was undaunted by the answer — 2,000 — and organized a group that completed the task over the course of a year.

Those who would like to contribute by purchasing a specific item or simply donating cash can contact Graves at susan.graves@lincoln.k12.or.us.