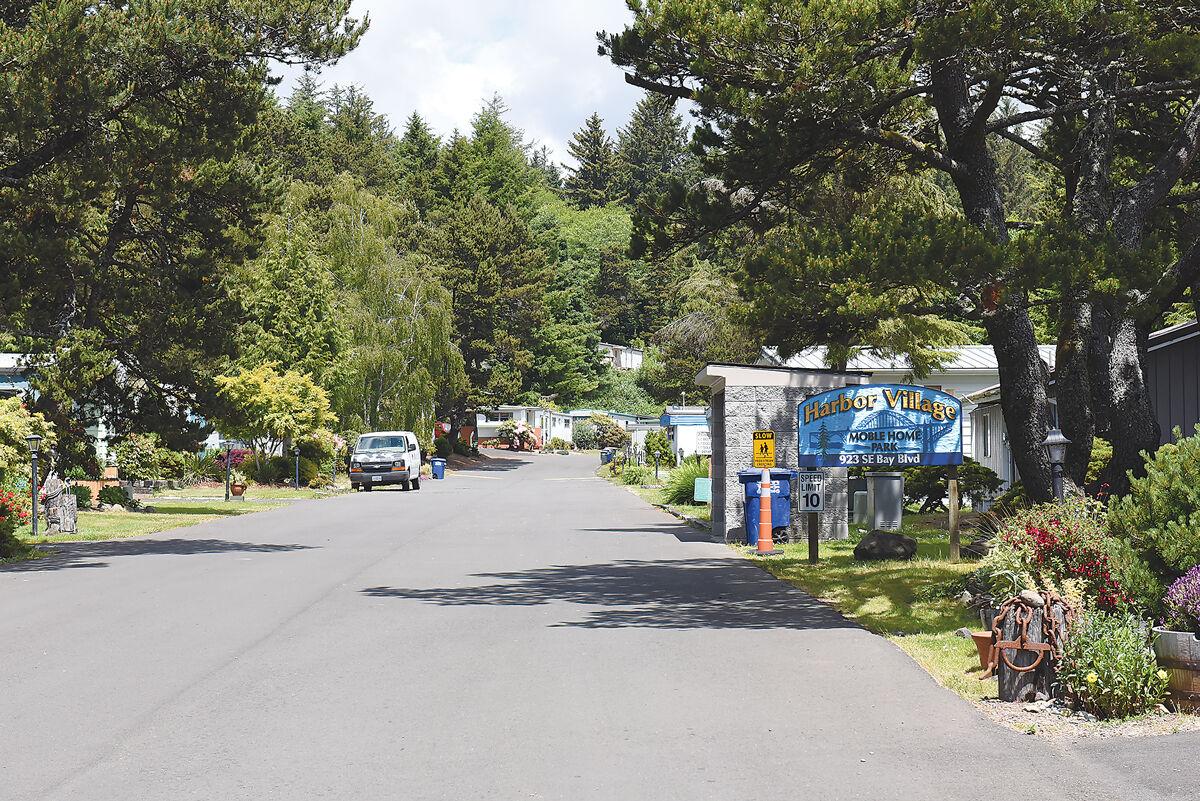 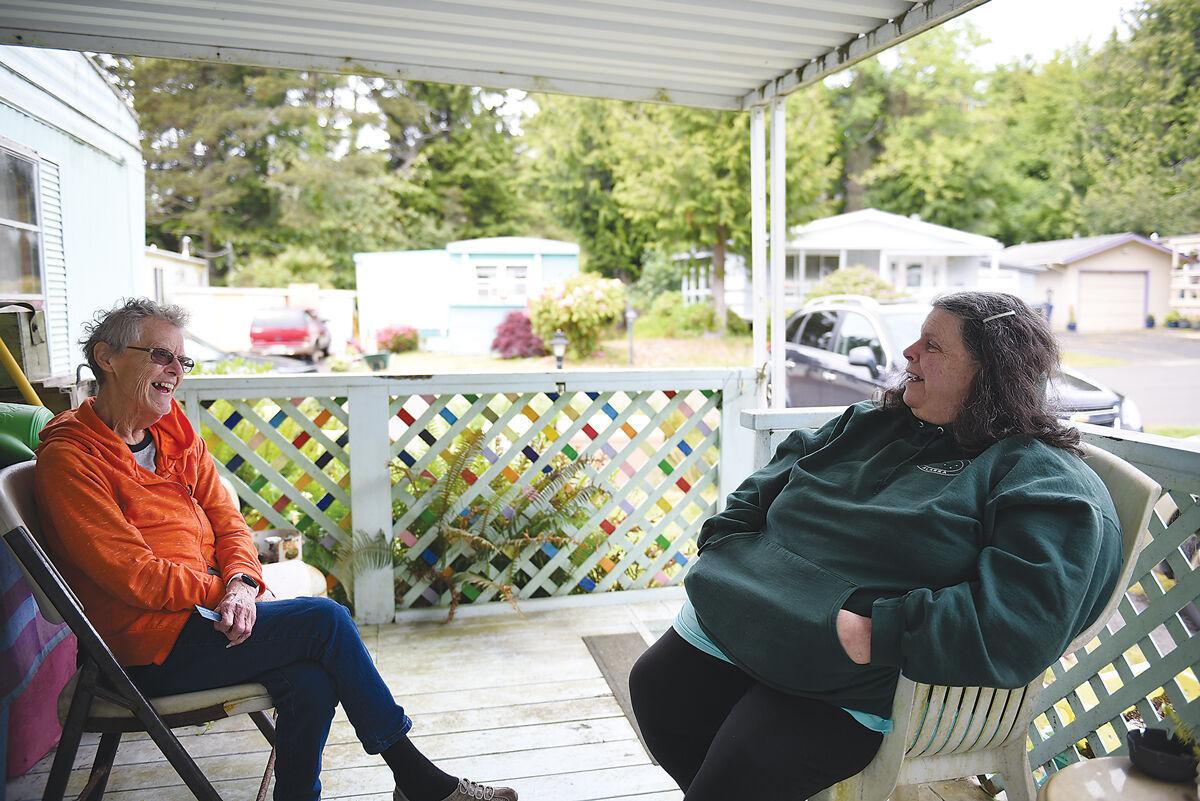 Edla Siewell, left, and Gail Green share stories from their time as residents of Harbor Village. A cooperative of tenants at the hybrid mobile home/RV park, located on Newport’s Bay Boulevard across from the Embarcadero, closed on its purchase of the property in May. (Photo by Kenneth Lipp)

Edla Siewell, left, and Gail Green share stories from their time as residents of Harbor Village. A cooperative of tenants at the hybrid mobile home/RV park, located on Newport’s Bay Boulevard across from the Embarcadero, closed on its purchase of the property in May. (Photo by Kenneth Lipp)

NEWPORT — Rather than take their chances with a new landlord who could raise rents by around 10 percent every year, or even a developer who might find another use for the prime real estate across Bay Boulevard from the Embarcadero Resort, residents of Harbor Village mobile home and RV park formed a corporation, took out millions in bridge loans and bought the property.

“To have a good neighbor you have to be a good neighbor,” Harbor Village Cooperative member Gail Green said Monday, sitting on her front porch with fellow resident Edla Siewell. Green has lived there 10 years, Siewell moved in 29 years ago, and they’ve both seen the property pass through several owners.

As of June, they and their neighbors are the new landlords, and they all have a role approving rent, bylaws and community rules, road and infrastructure work, and electing governing board members for the neighborhood of 201 mobile home and RV lots, home to as many as 400 people.

When the owner of the property decided to sell in late November of last year, state law required that tenants be notified and given 10 days to make an offer to buy the property.

On the ninth day, resident Martin Desmond, an accountant who serves as treasurer for a Washington-based organization that advocates for cooperatives in economic development, gave owners notice that he intended to form a tenant committee to cooperatively purchase the mobile home park.

A core group of about five residents organized behind the effort, including Desmond, Morella Bierwag, who now serves as president of the community’s interim board, and Cheryl Jones, who has been on the staff at the park for the past five years and is now acting as a de-facto office manager.

They enlisted the help of CASA of Oregon, a nonprofit focused on development in underserved and rural communities, which got its start in the mid-1980s providing housing for migrant farmworkers. It has since expanded its mission to include all affordable housing and other community facilities, such as health clinics. In 2008, it joined Resident Owned Communities USA as a network affiliate helping residents convert commercially owned manufactured and mobile home communities to nonprofit, tenant-controlled operations.

Rose Ojeda, CASA of Oregon’s project manager for manufactured housing and cooperative development, said the organization has helped 18 other resident co-ops in the state buy their mobile home parks, and two other purchases are in the works.

Co-ops have to compete with other buyers on the open market, and Ojeda said she gives the Harbor Village seller credit for being willing to sell to residents. “It’s not typical. Most sellers reject our offers to buy because they’re concerned about the timeframe and whether residents can really organize to obtain financing. This is the exception rather than the norm,” she said.

Mobile home parks have also become a hot commodity in real estate investment, and there were other offers for the property, although Ojeda said the final price — the appraised value of $9.7 million — was favorable in terms of cost per lot compared to some parks in close proximity to urban centers.

Financing came from the Network for Oregon Affordable Housing in the form of a bridge loan, as well as a supplemental loan from CASA. To qualify to receive affordable housing financing, at least 60 percent of the park’s residents had to earn 80 percent or less than the median local income. Lenders also had an additional requirement that substantially increased the final loan amount up by more than 50 percent — $6.5 million was borrowed for fees and infrastructure improvements, such as water and sewer work, that will be undertaken during the next several years.

“When we develop these affordable housing projects, we want to make sure that they’re going to be sustainable for a very long time,” Ojeda said. “So what we typically do, we not only acquire these properties, we also renovate them. That’s why this cost gets so inflated — resolving issues with water and sewer and bringing everything up to code.”

Ojeda said Harbor Village’s 148 RV lots made it a unique asset for affordable housing. All but 20 are only available to full-time residents — 80 percent of occupancy has long been at least semi-permanent— and the last 20 short-term spots will gradually be converted.

“The lender agreed that this was an important project to fund, not only because it’s a central Oregon coast property, but also because we needed to address this critical housing option that so many low income families choose now,” Ojeda said. In Newport’s challenging rental market, Harbor Villages’ RV spots have long been the abode of everyone from seasonal fishermen to medical professionals.

Ojeda also credited public officials, including Newport Mayor Dean Sawyer and state legislators, for their advocacy for the project. “We were honored to work with all of them to help these residents take control of their future and stabilize their housing costs long term,” she said.

The co-op closed on the sale May 27. Had they not bought the property, residents were likely to see rent increases of around 10 percent every year. By state law, the maximum annual amount fluctuates based on a regional price index. Last year, it was 9.9 percent, the previous year it was 10.3, and it’s 9.2 percent in 2021. An investor also might have decided to use the commercially zoned property for another purpose and given residents a 365-day notice to leave.

Non-members will pay extra in rent, as much as $100 more a month. Only about 15 haven’t joined, Bierwag, the interim board president, said, and she expects they will soon, given the potential savings.

Ojeda said the goal was to secure grant funding and the state’s affordable housing tax credit by the end of that three-year period, which would allow them to pay off the bridge loan with permanent financing at a lower interest rate and keep rents down in the long term.

That’s crucial to residents like Green, 68, who survives on $801 a month. She said she could weather the increase for the next three years, though she expected it might be too much for a few residents.

Green said she’s excited to have not only secured her unique slice of the Newport Bayfront, nestled among trees just blocks away from piers, shops and restaurants, but to see her rent money go toward improvements the majority of her neighbors decide they want rather than a private owner’s or company’s profits. She laughed with glee at the idea of planting a community garden.

She and Siewell both agreed the organizational effort — much of which took place via Zoom during the pandemic — and the sense of communal ownership brought residents closer together than they’d ever seen. Green moved to Harbor Village in 2011, and Siewell moved there with her husband in 1992.

Within the next month, all co-op members will vote on the community’s rules and board bylaws, and they’ll elect a seven-member board to replace the interim body. The cooperative hired a Portland property management firm to handle rent collection, maintenance and staff supervision.

Securing sufficient funds through grants and tax funds is not a forgone conclusion. In the worst case scenario, Ojeda said, another nonprofit organization might have to be brought in to take over the property, but she’s confident in their chances given CASA’s record of success and the community’s qualifications.

Interim board president Bierwag noted that Desmond, who originally spearheaded the purchase, voted against the final financing plan over concerns about that uncertainty, though she said he has still been a source of support behind the scenes. Desmond declined to comment for the News-Times story.

Jones, a six-year resident and five-year employee who is now her own boss, said she isn’t intimidated by the big dollar figures involved. “This feels secure and safe. People were so afraid they weren’t going to have a home. Now I know I’m going to be here forever, basically,” she said.

Bierwag said, “The culture has really shifted here. It was one of fear and inconsistent rules. If you didn’t fit in, you could be blackballed, and that has all changed completely.”