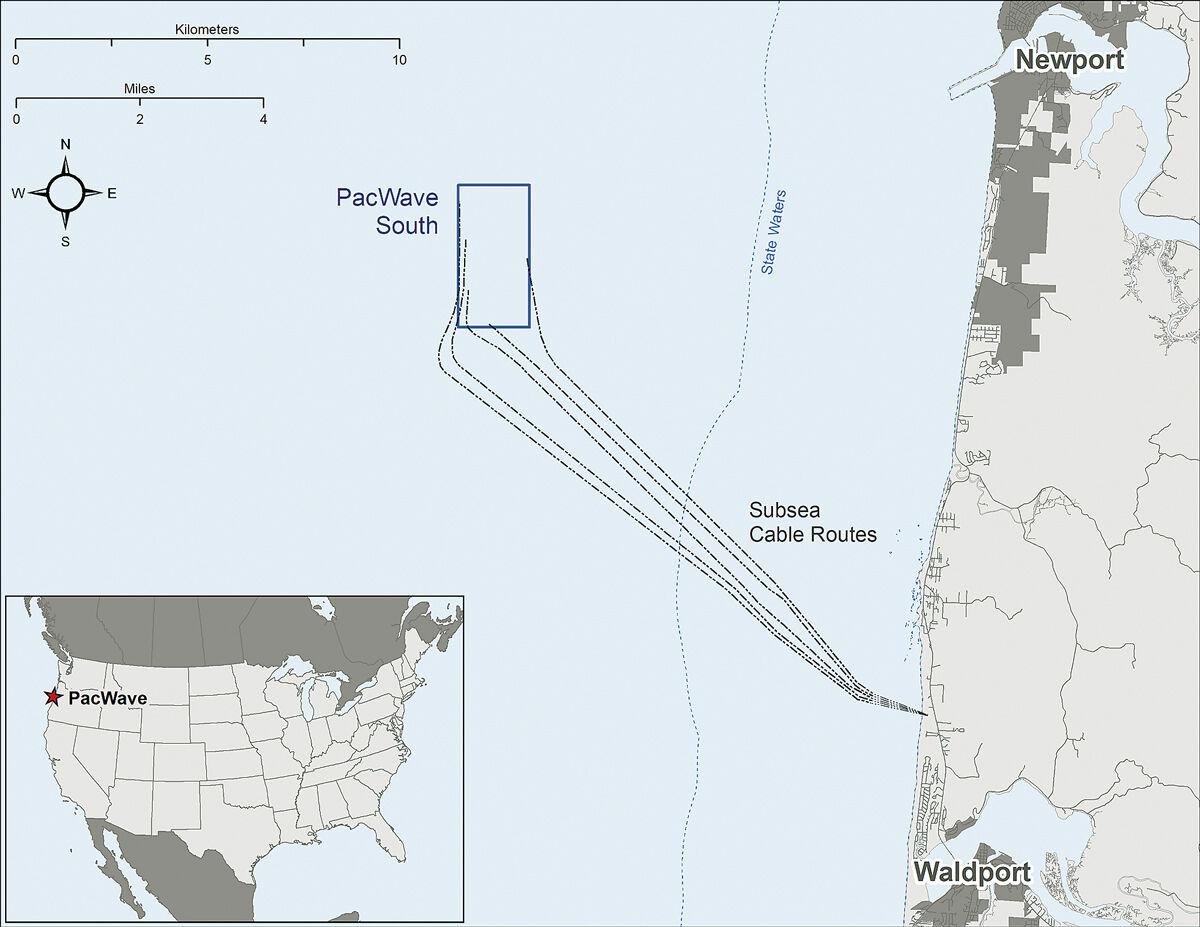 Concept art shows what a completed PacWave South facility would look like, with subsea cables running from the offshore facility to a landing point and then an onshore facility connected to the local power grid.

WALDPORT — After 10 years in the making, the waters off the shore of Lincoln County will soon be home to Oregon State University’s PacWave South project, one of the few open ocean wave energy testing facilities in the world.

Members of the PacWave team and representatives from the Oregon Parks and Recreation Department provided an update on the project’s current construction timeline and answered questions during two town hall meetings held via Zoom on Monday.

“We’re a globally recognized open ocean wave energy test facility. Basically, a site where developers of technology that will convert the energy of waves into electricity,” PacWave Deputy Director Dan Hellin said. “We provide a facility where developers can test their wave energy converters — or WECs as they’re usually known. There are very few sites in the world where this capability exists.”

The project received its final lease approval in February and its final permitting approval from the federal government on March 1, putting an end to a 10-year approval process that began with a feasibility study in 2011 and clearing the project to begin construction this summer.

“Permitting for a project like this is a pretty intense process as you can imagine,” Hellin said. “There are a lot of state agencies, federal agencies and stakeholders that have been involved over the last eight years to finally get us where we are now.”

When completed, PacWave will provide space for developers to test and refine up to 20 wave energy converters at a time, along with other associated technologies. The project will also gather data on local environmental, economic and social effects of the project that could help inform potential commercial developments of wave energy facilities in the future.

The project will include a four-berth testing facility encompassing two-square nautical miles located seven miles out to sea between Waldport and Newport. The offshore facility will be connected to an onshore utility monitoring facility on Wenger Lane off of Highway 101 via undersea and underground cables — the landing area for which will be located at Driftwood Beach State Recreation Area near Waldport. The onshore facility will in turn be connected to the local Central Lincoln PUD power grid.

Construction is set to begin as soon as June 1 as the PacWave team begins boring to construct the cable landing at Driftwood, with the park to remain closed for eight to 12 months for the construction and following rehabilitation work.

Site planning for the project’s onshore utility connection monitoring facility will begin this year, while construction is scheduled to begin next year. Underground cable will be run from the Driftwood landing site under the highway to the monitoring facility.

The largest part of the construction will be the installation of seven miles of subsea cable connecting the offshore facility to the onshore facility, which is expected to begin in 2022. But given the current timeline, planning might spill over to 2023. The latest the PacWave project would be clear to begin operating would be 2024.

During the Q&A segment, PacWave Project Manager Justin Klure addressed possible environmental impacts of the project, noting part of PacWave’s research goals focus on determining what long-term effects offshore wave energy facilities might have on the local environment. This includes what kinds of marine life are attracted to undersea structures and the potential impacts of electric magnetic fields on local marine life — the latter of which current research shows should be minimal.

The offshore testing facility will feature seafloor monitoring equipment to observe the local undersea environment in real time, as well as acoustic monitoring equipment on site during and after construction to monitor sounds and isolate any from the project that might end up having an adverse effect on local marine life.

In regard to commercial and sports fishing in the area near PacWave, Hellin said he expects the U.S. Coast Guard may advise people to avoid the offshore facility, but currently there are no plans to make any areas an exclusion site. Hellin added the offshore testing site would feature many structures that may make navigation in that two square mile area more difficult, while Klure noted there will be increased traffic when cable construction begins in 2022.

Hellin said they will also be maintaining communication with members of the local fishing community to keep them updated on the status of the project.

The project is funded by multiple sources, including the U.S. Department of Energy, State of Oregon, OSU, M.J Murdock Charitable Trust, Ray and Tye Noorda Foundation and other small individual supporters.

For more information on the PacWave project, or to check on the latest update to the construction timeline, go to pacwaveenergy.org.