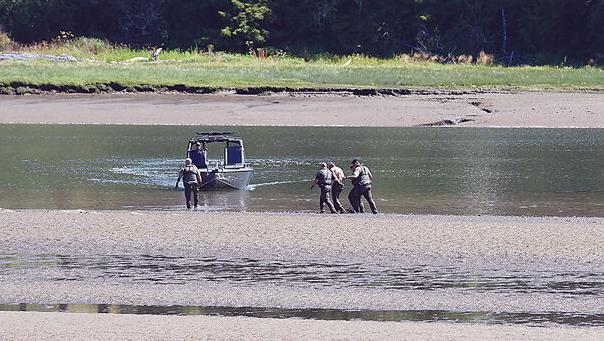 Deputies walk a man identified as Ted Shipley, 28, of Toledo to a police boat, after he fled Monday into the Yaquina Bay River. 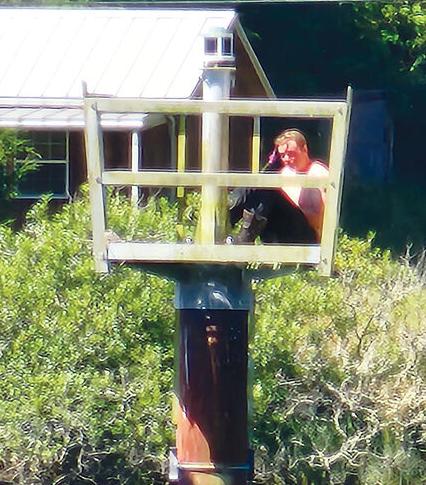 A man identified as Ted Shipley, 28, of Toledo, climbed a buoy and rested there for about 20 minutes after he fled into the Yaquina River in an attempt to elude law enforcement. (Photo courtesy of Brittany Nolta)

Lincoln County Sheriff’s Office deputies and Oregon State Police troopers pursue a man who fled into the Yaquina River Monday after they attempted to arrest him for allegedly assaulting two men in their home Sunday night. (Photos by Steve Card)

Lincoln County Sheriff’s Office K-9 Ghost was released to subdue a suspect who fled police by swimming into the Yaquina River and ultimately apprehended the man with a K-9 bite.

Deputies walk a man identified as Ted Shipley, 28, of Toledo to a police boat, after he fled Monday into the Yaquina Bay River.

A man identified as Ted Shipley, 28, of Toledo, climbed a buoy and rested there for about 20 minutes after he fled into the Yaquina River in an attempt to elude law enforcement. (Photo courtesy of Brittany Nolta)

A man suspected of breaking into a home and attacking its residents Sunday night was apprehended Monday after leading law enforcement officers on a chase into the Yaquina River that ended with the man being bitten by a police dog.

Ted Shipley, 28, of Toledo, was arrested Monday and charged with first-degree burglary, criminal mischief, two counts of fourth-degree assault, five counts of menacing, stalking, resisting arrest, third-degree escape and interfering with a law enforcement animal. He was housed at the Lincoln County Jail with no bail as he awaited arraignment as of deadline.

According to a press release from the Lincoln County Sheriff’s Office, the incident began Sunday night when deputies were dispatched to a home in the 1000 block of South Bay Road in Toledo on a call that there was a burglary in progress.

The female caller was hiding inside her home as an unknown man, later identified as Shipley, was reportedly in an altercation with two male residents of the home. Deputies arrived around 11:13 p.m. and were told by the residents Shipley, who was a “childhood friend” of the homeowner’s adult daughter, showed up uninvited, entered the home during the night and began a physical altercation when confronted by multiple residents, the release states.

According to an affidavit of probable cause filed July 19, Shipley was attempting to get to the second story of the home where several women were hiding and was reportedly calling out the name of the woman he was looking for. A male resident confronted Shipley, who allegedly responded by punching the man several times in the face.

Shipley then reportedly threw a chair through the sliding glass door of the home and once again attempted to climb the stairs before being confronted by a second male resident, who he also assaulted by punching several times in the face and pushed with enough force to send him through a bathroom door. Shipley then got on top of the man and punched him in the face until the first man pulled Shipley off and the two tumbled down the stairs together, the affidavit states.

Shipley then fled the scene in a silver Chevrolet Cruze, and the residents later sent videos of the incident to deputies, according to the affidavit. Shipley could not be located by law enforcement during the night.

Deputies say at least one of the residents was injured during the altercation and required medical treatment, but did not comment on the extent of those injuries.

The affidavit states both male residents had blood on their faces the night of the incident, and one had a swollen jaw.

The following day, deputies were informed Shipley was seen at a mill in Toledo where he worked, and they went there to speak with him.

When asked what happened the night prior, Shipley reportedly told deputies he went to the home in order to reconnect with one of the residents who he believed was being held against her will and said he wanted to check on her, according to Lincoln County Sheriff’s Office Lt. Karl Vertner.

Shipley reportedly told deputies he believed sneaking into the home would be OK, but said when he was confronted by male family members who lived there he thought they were “imposters” and admitted to getting into a physical altercation with them. Shipley said he broke a sliding glass door during the altercation and then fled, according to the release.

Deputies told Shipley he was under arrest after the interview and said Shipley immediately attempted to flee. They attempted to use force to stop him and deployed Tasers against him twice, which were ineffective, the release states.

Shipley fled from deputies on foot toward the Yaquina River, and a Lincoln County K-9 team and drone team were called in to assist with the resulting manhunt. Shipley was later sighted entering the Yaquina Bay River near the Toledo Airport around 10:54 a.m. and attracted a crowd of onlookers as deputies deployed a boat to pursue him, according to Vertner.

Shipley reportedly swam three quarters of the way across the river before stopping to climb onto river channel marker 47, where he rested for approximately 20 minutes before once again entering the water, the release states.

Deputies, troopers from Oregon State Police and Lincoln County K-9 Ghost approached Shipley in a boat but reached a mud flat where it was too shallow and full of weeds to pursue him further. Law enforcement officers left the boat and pursued him on foot through the muddy, shallow water.

Shipley was taken into custody and transported to Samaritan Pacific Communities Hospital in Newport, where he was treated for water exposure and the bite to his arm. After treatment, Shipley was transported to the Lincoln County Jail.

Court records show Shipley was arrested July 9 after officers allegedly found him driving recklessly near Butler Bridge Road July 7 and suspected he was driving under the influence. Shipley allegedly fled from a traffic stop, and police pursued him to a nearby residence where “no trespassing” signs were posted and cut off the pursuit. Officers located Shipley at work two days later and arrested him.

Shipley was charged with attempting to elude a police officer, reckless driving and DUII and signed a conditional release agreement July 12 requiring he not posses controlled substances and that he be required to wear a SCRAM alcohol and location monitoring device.