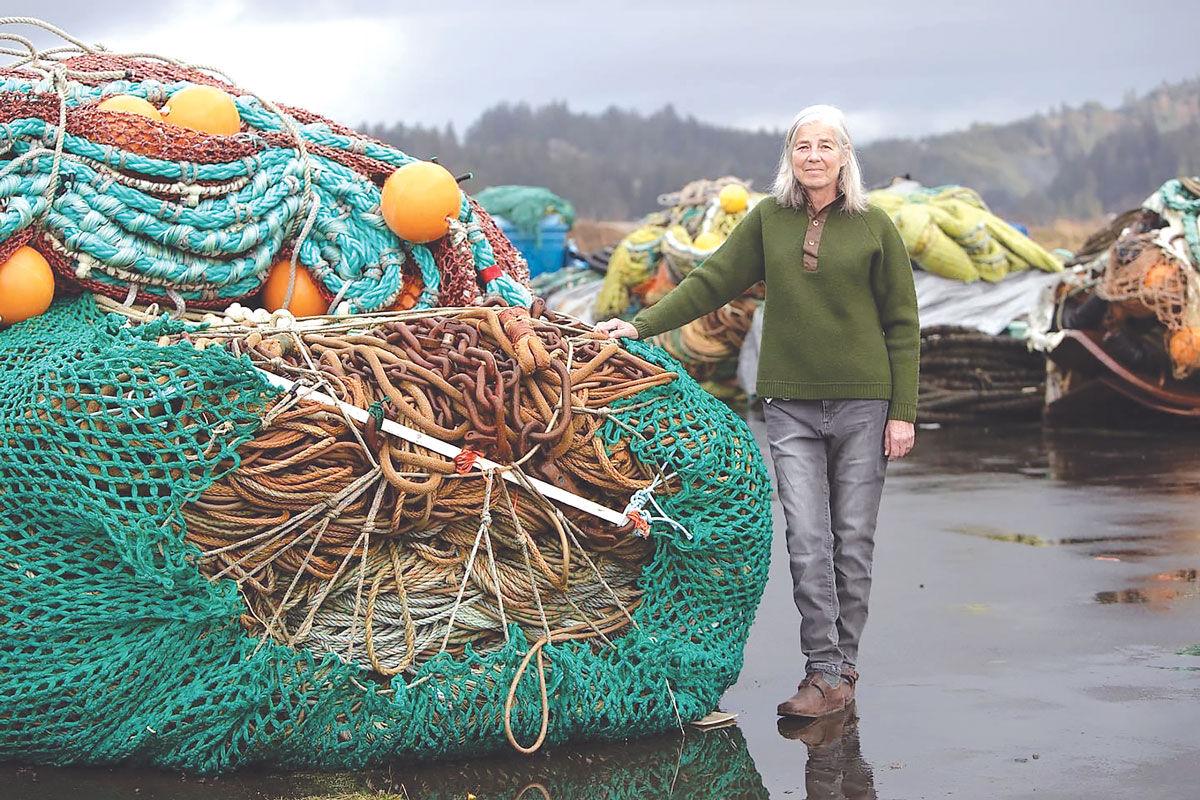 Sara Skamser is shown in front of her fishing nets at Foulweather Trawl in Newport. Skamser, who recently passed away from cancer, was described as a trailblazer and innovator in her field. 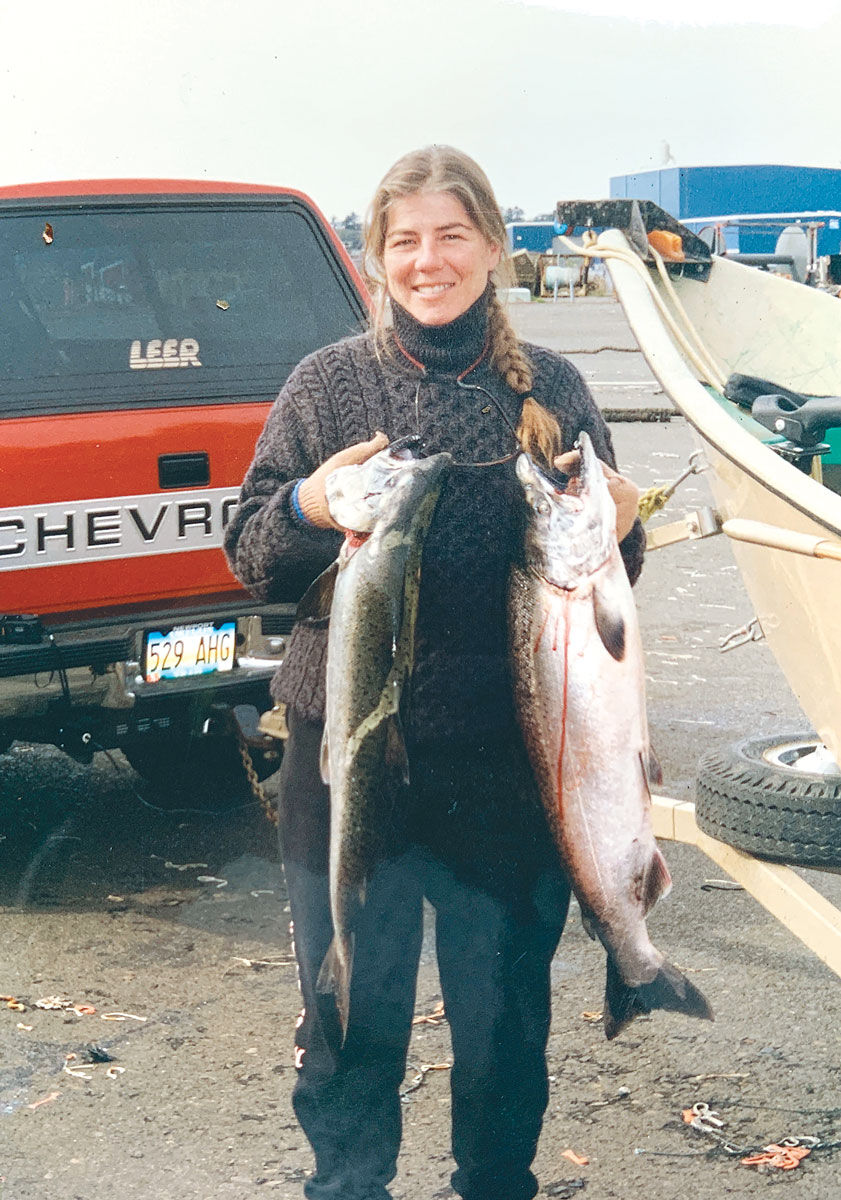 Sara Skamser is shown in front of her fishing nets at Foulweather Trawl in Newport. Skamser, who recently passed away from cancer, was described as a trailblazer and innovator in her field.

NEWPORT — As news of Sara Skamser’s death spread across the community last week, people were mourning her passing but also celebrating the life of the woman who made such a huge impact in the fishing industry and on everyone who knew her.

“Sara was a ball of strength,” said longtime friend and fellow Newport Fishermen’s Wives member Taunette Dixon. “She was super savvy and so intelligent. She had this drive to excel and prove to those who didn’t feel women were equal. She proved that not only was she an equal, but she could top most anybody.”

Commenting on a social media post from the Fishermen’s Wives about Skamser’s death, dozens of people shared their sadness and condolences. She was called  “gutsy,” “a great teacher,” “a bright light in everything she did,” and “a tough cookie.” One commenter said Skamser was the “trawl goddess of the West Coast and one of the smartest, funniest, concerned, compassionate and generous people you would have ever met.”

Skamser died after a battle with carcinoid cancer. But her legacy lives on — not only for fishing, but as an innovator in the fishing industry.

In the early ’80s, Skamser and her husband, John, started Foulweather Trawl, a business that makes an innovative excluder net that sorts fish by size. The nets made a major impact on the sustainability of the commercial marine fishing industry of the West Coast by reducing unwanted catch — known as bycatch.

In response to a federal disaster declaration, regional fishery managers imposed tough restrictions intended to rebuild fish populations that included quotas for bycatch. If fishermen caught too much of a non-targeted fish, they risked losing access to fishing grounds. Skamser’s nets helped fishermen avoid sensitive and overfished species and are an important piece of the effort to rebuild West Coast groundfish that in the early 2000s stood on the brink of collapse.

Skamser did the design work on the nets and put every effort into creating them, according to Dixon.

Kurt Cochran, an area fisherman, said Skamser will be missed. “I could come in with some new ideas and she never said no,” Cochran said. “She had a willingness to try new things.”

Cochran said Skamser was innovative whether it was coming up with new ways for fishermen to be more efficient or her adapting the excluder nets for specific bycatch. “She was always trying to push the industry forward over her own interests,” he said.

Kate Grinde, a childhood friend of Skamser, said Skamser was an astute business owner. “She learned her business side from running her parents’ grocery store right out of school,” said Grinde. “But she had the heart part of running a business too. She loved the craft of net making. She saw it as an old art.”

Skamser, a Wisconsin native who came to the Oregon coast in the late 1970s looking for work as a trained welder, tried unsuccessfully to get a job on a commercial fishing boat. “She originally wanted to be a fisherman,” said Dixon. “She tried really hard, but it was such a male-driven field.”

“She was adventurous and willing to try things outside traditional women’s roles,” said Grinde. “She was tough. She had to be. A lot of people didn’t want women in those jobs.”

As a welder, she helped build huge ships in Sturgeon Bay and railroad cars. “She obviously wasn’t the first woman welder or the only one,” said Grinde. “But she came along at a time where it was important for women to be capable of doing whatever they wanted to do. Nothing was going to stop her.”

As much as she loved fishing and the fishing industry, it wasn’t until she moved to Newport that she felt truly rooted. “Newport gave her a sense of home and community,” Grinde said.

Skamser was a dominant figure in the Newport Fishermen’s Wives for several years and held nearly every position on the board at some point. “She led many events and spearheaded many projects,” Dixon said. “Her focus was always on being a positive part of the fishing industry. She worked tirelessly to achieve that.”

In her biography on the Newport Fishermen’s Wives website, Skamser expressed her love for the organization. “These women are unbelievably resilient and strong, and I am grateful every day for having made my way to the coast all those years ago,” she wrote.

Skamser won the Unlimited Women’s Division Arm Wrestling Championship of Kodiak Island in 1984. “She was forever proud of that,” said Dixon with a laugh.

“She loved every aspect of her work — the nets and the people in the fisheries,” Dixon added. “She was well respected in the community, (and) she had a big contribution in so many areas.”

Dixon said Skamser was private about her health, so her death may have come as a surprise to a lot of people. “She fought super hard,” she said. “She still felt like she had so much to give. She wasn’t ready.”

The Fishermen’s Wives will be hosting a Celebration of Life on Nov. 6 at Foulweather Trawl. Dixon said they wanted to wait until the fleet is home so everyone can who knew her could attend. “She needs a big party,” Dixon said. “She would be really happy with that. In her own mind, she was already famous.”