Starting at
$12.00 for 30 days
Get Started
View all rates
You are the owner of this article.
Edit Article Add New Article
You have permission to edit this article.
Edit
Welcome, Guest
Home
News
Community
Sports
A & E
Business
Food & Beverage
Obituaries
Opinion
Classifieds
Video
Quick Links
Share This

Four Lincoln County vacation rental owners filed suit Nov. 30, seeking to strike down Measure 21-203, which imposes immediate new regulations on short-term rental dwellings outside cities and would phase out all such rentals in unincorporated, low-density residential zones in five years.

The lawsuit was filed the day the Lincoln County Board of Commissioners opted to allow its moratorium on granting new STR licenses to expire.

During their regular meeting earlier this week, commissioners and County Counsel Kristin Yuille reiterated the county’s position — Measure 21-203, approved by a clear majority of county voters in November, became effective as soon as it was certified by the county clerk on Nov. 19. Among other provisions, the measure immediately prohibits new licenses in R-1, R-1-A and R-2 zones outside cities.

Vacation rental industry group VIA Oregon has been organizing its membership for legal action since the measure’s success at the polls Nov. 2, circulating a litigation intake form to vacation rental owners from which to select a few representative plaintiffs.

The suit filed Tuesday in Lincoln County Circuit Court names the county itself, Clerk Dana Jenkins and Sheriff Curtis Landers as defendants — the clerk for his role certifying the election results, and the sheriff in his capacity as head of the county’s STR licensing authority.

The complaint, signed by attorney Steve Berman, argues Measure 21-203 is “unreasonable, was adopted with procedural errors and conflicts with paramount state law or constitutional provision,” and it detrimentally impacts the use and value of the plaintiffs’ property.

The attorney asked the court for a temporary restraining order preventing the county from enforcing any of the provisions of the measure. On Wednesday afternoon, Judge Amanda Benjamin granted a restraining order for a period of 10 days pending a hearing on a preliminary injunction. A motion hearing is scheduled for 2 p.m. on Dec. 6.

With the county moratorium expired and the measure no longer in effect, the Lincoln County Sheriff's Office accepted nine applications for STR licenses on Thursday. County commissioners held a special meeting Friday and adopted a new temporary moratorium applicable in R-1, R-1-A and R-2 zones only. The resolution applies to pending license applications, so none received the previous day were processed. The new moratorium is in effect until March 3 unless extended.

The 12-page complaint argues that Measure 21-203 is a “zoning ordinance” adopted without proper hearing or notice, that it unlawfully restricts an existing lawful use, that it does not contain formal language required by state statute, and that it is pre-empted by state Measure 49. Plaintiffs also argue it violates Article 1 Section 21 of the Oregon Constitution (which bars “ex-post facto laws”) and is “unconstitutionally vague.” 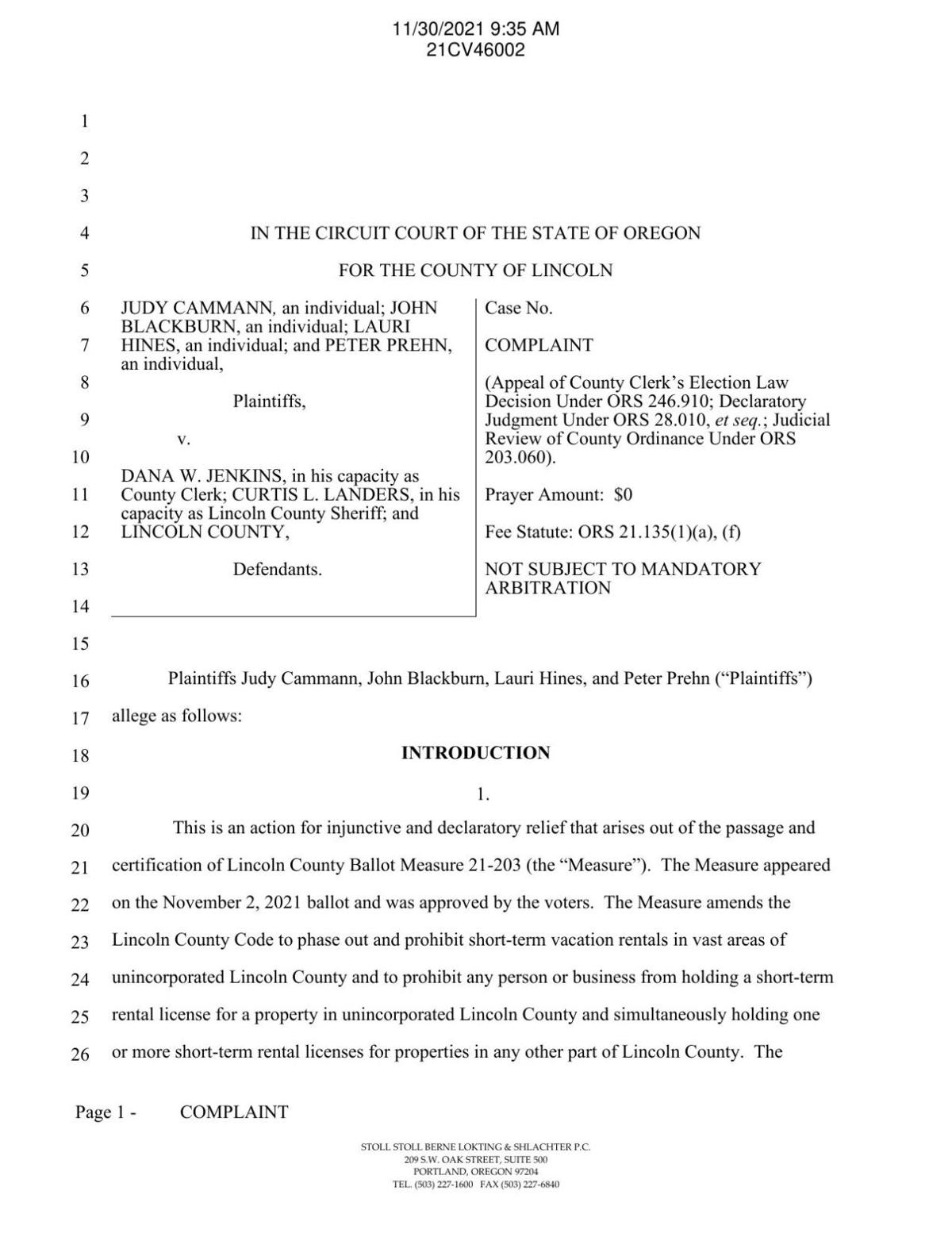 The lawsuit highlights a section of the measure that says anyone who holds an STR license in low-density residential zones outside of cities cannot have an ownership stake in an STR license “for any other property within Lincoln County,” without specifying unincorporated areas.

The complaint argues that regulation is pre-empted by Oregon Revised Statute 203.040, which reads, “ordinances adopted (by a county governing body) in exercise of the police power shall not apply inside an incorporated city” unless with the consent of the city’s governing body or electors.

All but one of the plaintiffs hold multiple STR licenses. Prehn owns a rental in Otis that is licensed by the county, as well as one within Lincoln City. Hines owns a vacation rental home outside Waldport zoned RR-2 and three located in and licensed by the city of Newport.

The plaintiffs are asking the court to reverse the county clerk’s certification of the measure and declare it void in its entirety “because it was not validly adopted,” to declare it invalid due to conflict with state law and enjoin its enforcement, as well as to award attorneys’ fees, court costs and “such other forms of relief as this court deems just and necessary.”

The county had not filed a response to the complaint as of Thursday morning. It’s unclear how wholesale a defense it will mount, considering prior comments by former County Counsel Wayne Belmont and commissioners expressing doubt about the legality of some elements of the measure. The complaint itself quotes Belmont twice.

But commissioners were also clear during their special meeting Friday that the new moratorium was intended to be faithful to the spirit of the ballot measure.

“All three of us before the election said we did not support the initiative,” Commissioner Claire Hall said. “We thought the improved enforcement and inspection processes that we were adopting through Ordinance 523 would be a better answer to problems with short-term rentals.”

But voters spoke “rather overwhelmingly” in favor of the measure, Hall said, “and on Wednesday, we all said in one form of another that we were going to defend the measure and the intent of the measure as long as we were able to do so. So to me we’re absolutely obligated to approve this resolution.”

Though not named as a defendant, 15neighborhoods, the organization behind the petition to get the measure on the ballot, will likely seek approval from the judge to intervene and mount its own defense.

Separately, a group of 21 property owners, also organized by VIA Oregon, have filed an appeal of Ordinance 523 with the Oregon Land Use Board of Appeals. Throughout the process of considering and adopting their own new STR legislation, commissioners emphasized that the ordinance was a business license regulation approach, rather than land use or zoning.

That appeal argues the ordinance attempts land use changes and zoning under the guise of business licensing. The property owners have not yet filed their full petition based on the county’s legislative record, but the notice of appeal singles out the non-transferability element in the ordinance and lack of “grandfather” provision.

Editor's note: This article was updated to reflect the new county moratorium adopted by the board of commissioners and comments by Commissioner Claire Hall.