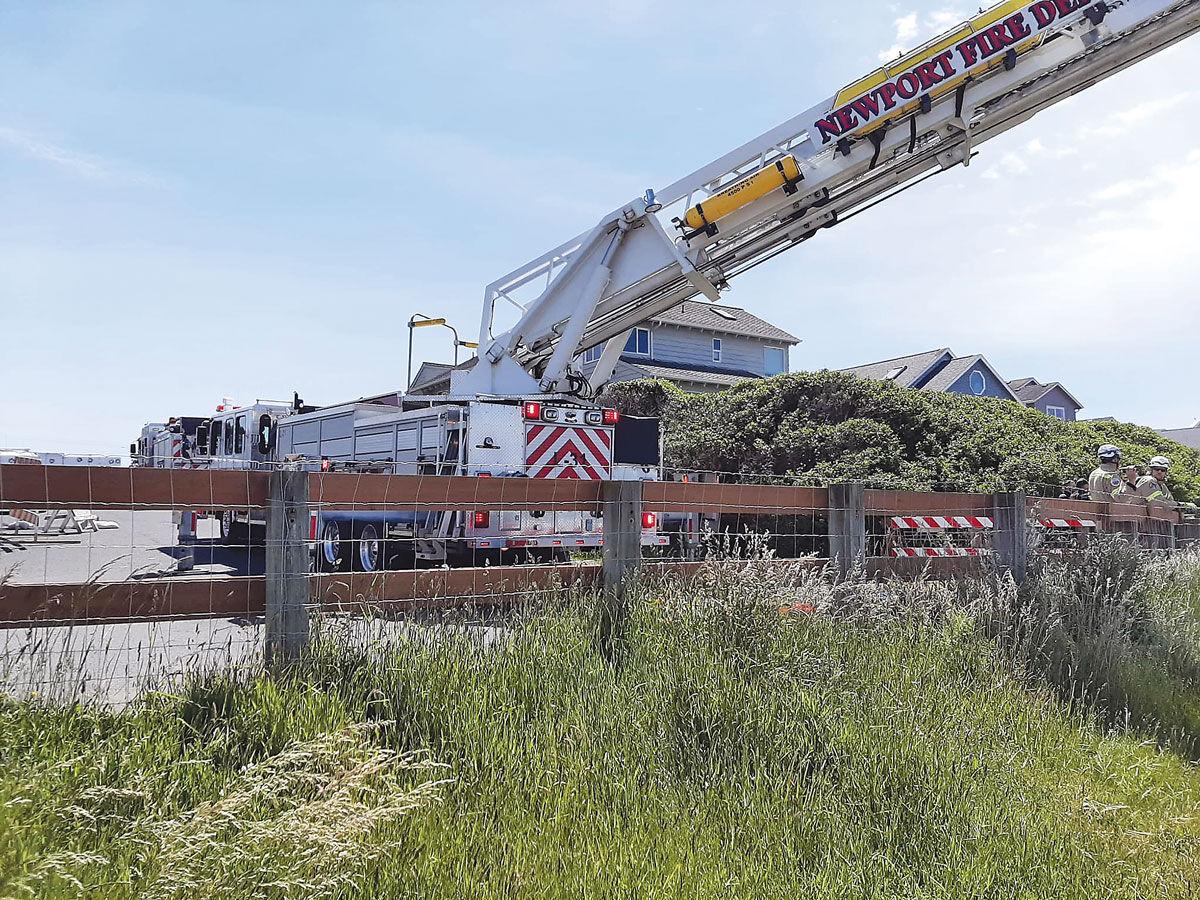 A Newport Fire Department truck’s ladder is extended for use as an anchor point from which a first responder can descend by rope to rescue an injured fall victim. 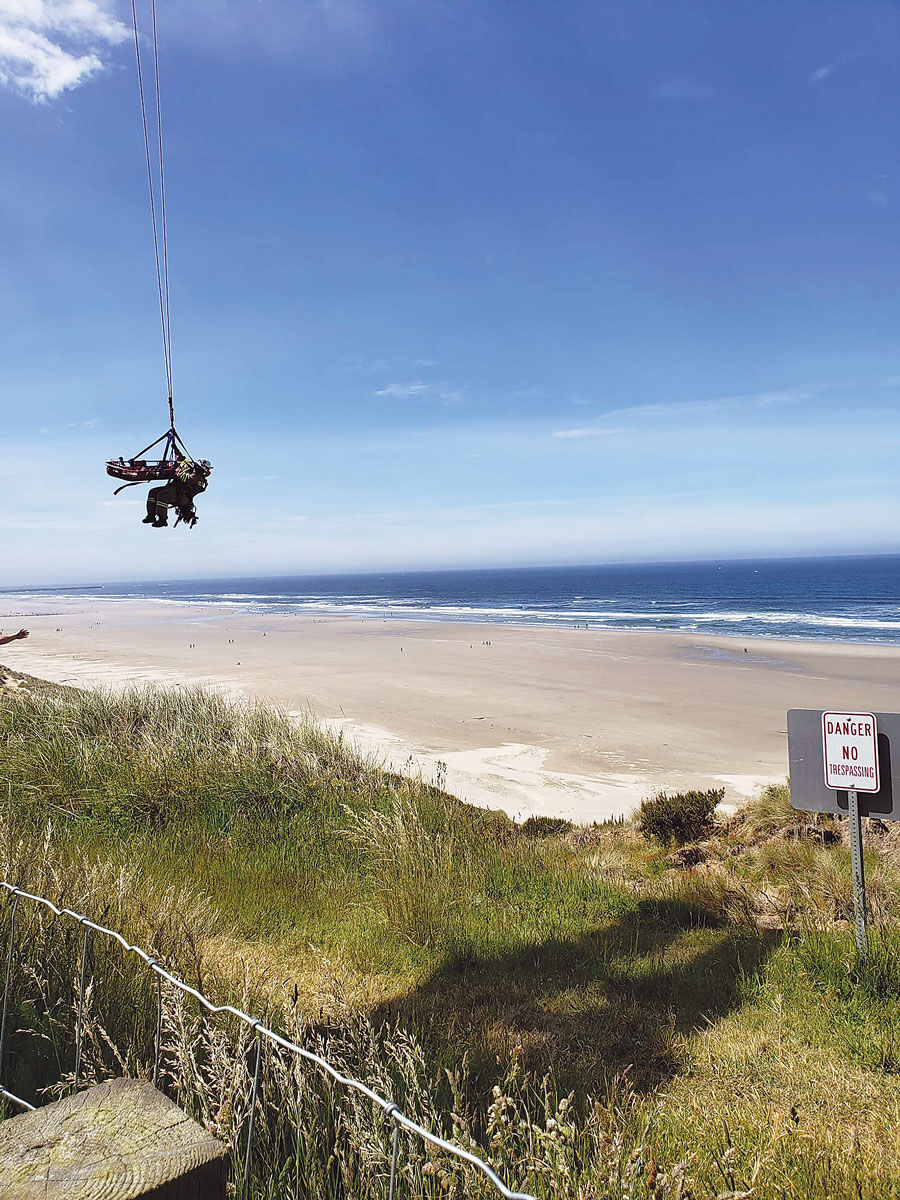 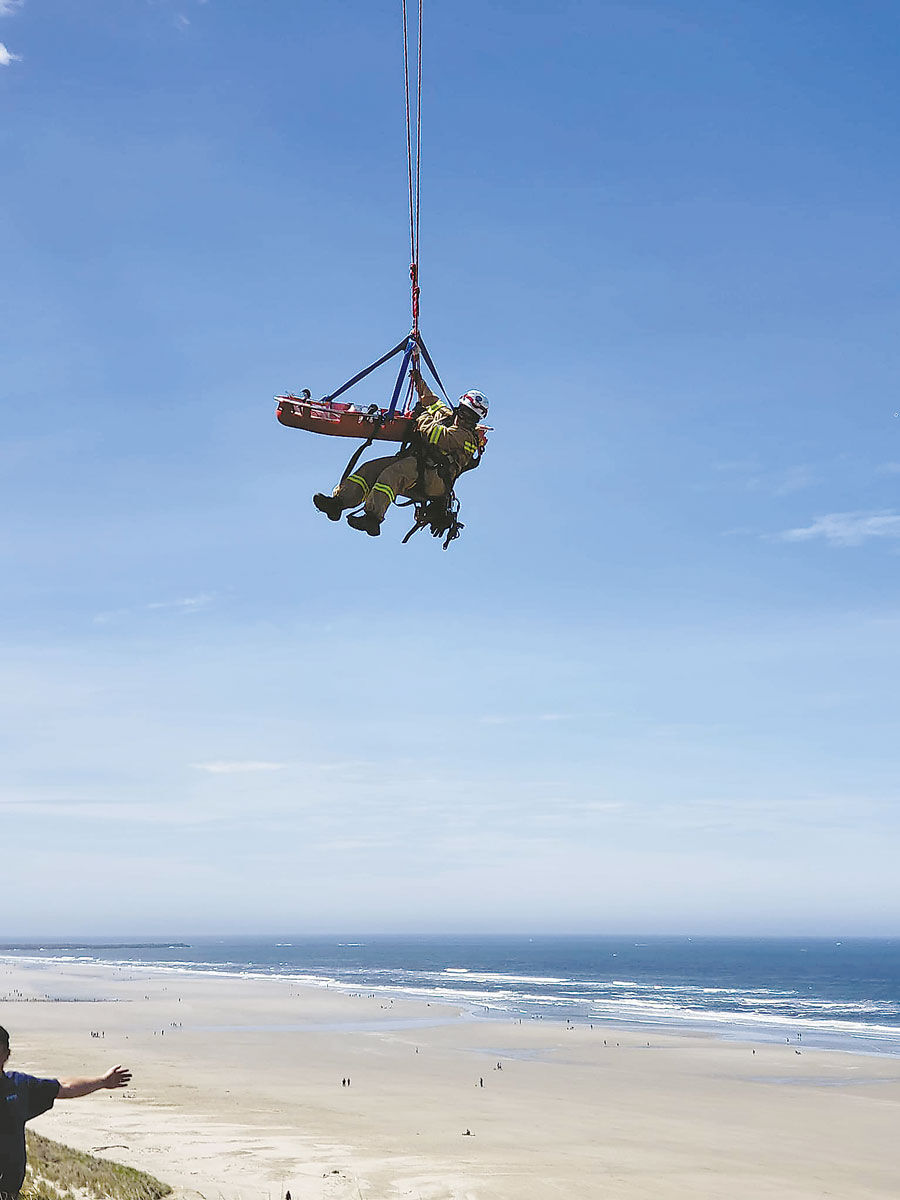 A member of the Lincoln County Technical Rescue Team lowers with a skid to rescue a woman who fell from ledge at the site locally known as “Jump off Joe” in Newport on Sunday morning.

A Newport Fire Department truck’s ladder is extended for use as an anchor point from which a first responder can descend by rope to rescue an injured fall victim.

NEWPORT — A woman went past barricades and no trespassing signs at a defunct condominium development on a north Nye Beach cliffside Sunday, falling into wide fracture created by dramatic land movement at the site earlier this year.

Assistant Chief Bob Harvey of Newport Fire Department said the woman fell about 10 feet into a chasm, which formed when the slideblock of a long-active landslide moved more than 20 feet toward the ocean in the span of a few weeks following heavy winter rains.

After its abandonment in the 1990s, the location became a popular spot for view seekers, with its vista at the boundary of Nye and Agate beaches.

Following the recent land movement, the city erected barricades on Northwest 11th Street, blocking the parking lot into which Northwest Coast Street dead ends, and added no trespassing signs and fencing around the former condo property itself, which is owned by Lincoln County.

Officials have urged the public to stay away from the dangerous active landslide and warned that trespassing at the site is a crime.

The floor of the chasm and surrounding cliffside is treacherous, covered in cracked concrete slabs, crumbled stone, dirt and smaller fractures. Harvey said the woman injured her ankle in the fall and was not ambulatory, which along with the perilous location made it a complex rescue.

Responding to the scene at approximately 10:30 a.m. were about 10 emergency personnel from Newport Fire Department, Newport Police Department and the Lincoln County Technical Rescue Team, which is composed of members from all the county’s fire departments. The team stages rescue equipment in three geographic modules, north, south and east, and all members respond to calls countywide based on availability.

On Sunday, the team used the extended ladder of a Newport Fire Department truck as an anchor point above the ravine to stage a rope rescue. A team member lowered to the woman, assessed her and placed her on a skid, in which she was raised to a waiting gurney. Pacific West Ambulance transported her to Samaritan Pacific Communities Hospital with non-life-threatening injuries. The rescue operation took about an hour.

Harvey repeated the warning to avoid the area in the interest of safety. “The conditions are hazardous, and we don’t know when the land is going to move again,” the assistant chief said.