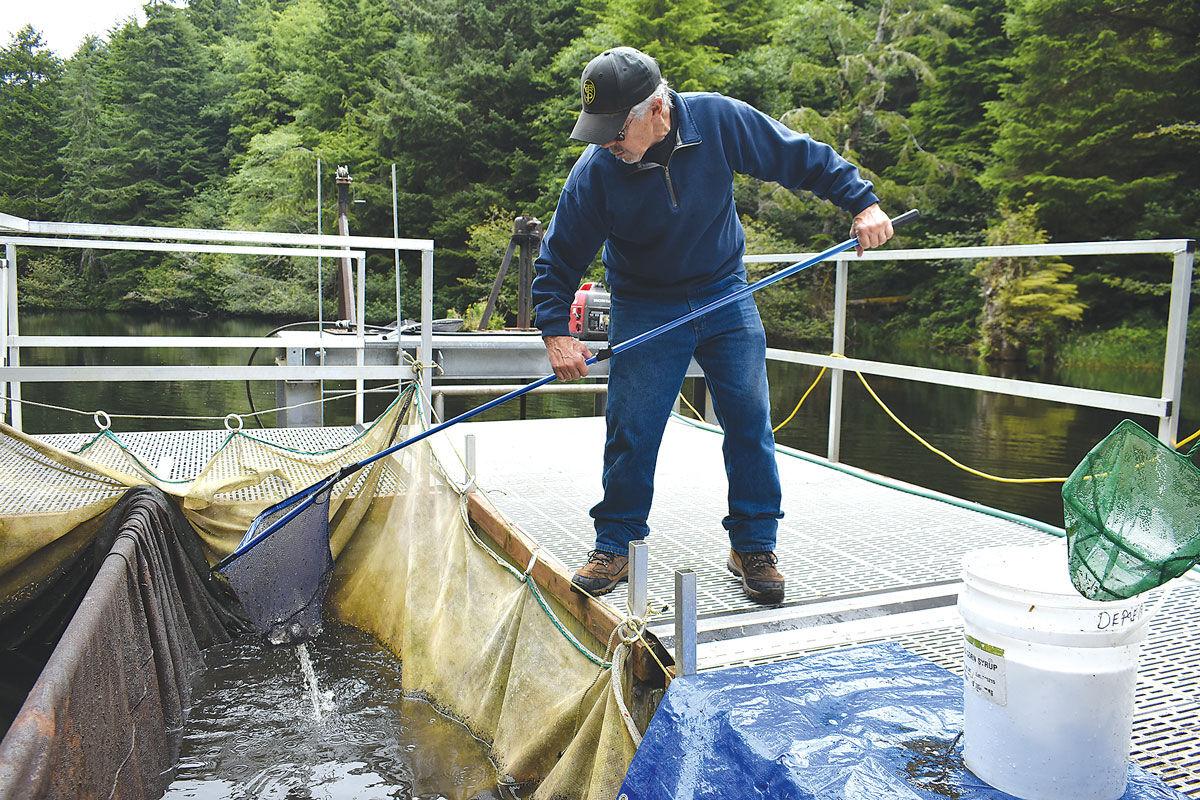 A member of the Depoe Bay Salmon Enhancement Commission transfers a net full of salmon smolt from a holding pen to a bucket so volunteers can clip their fins. (Photo by Mathew Brock) 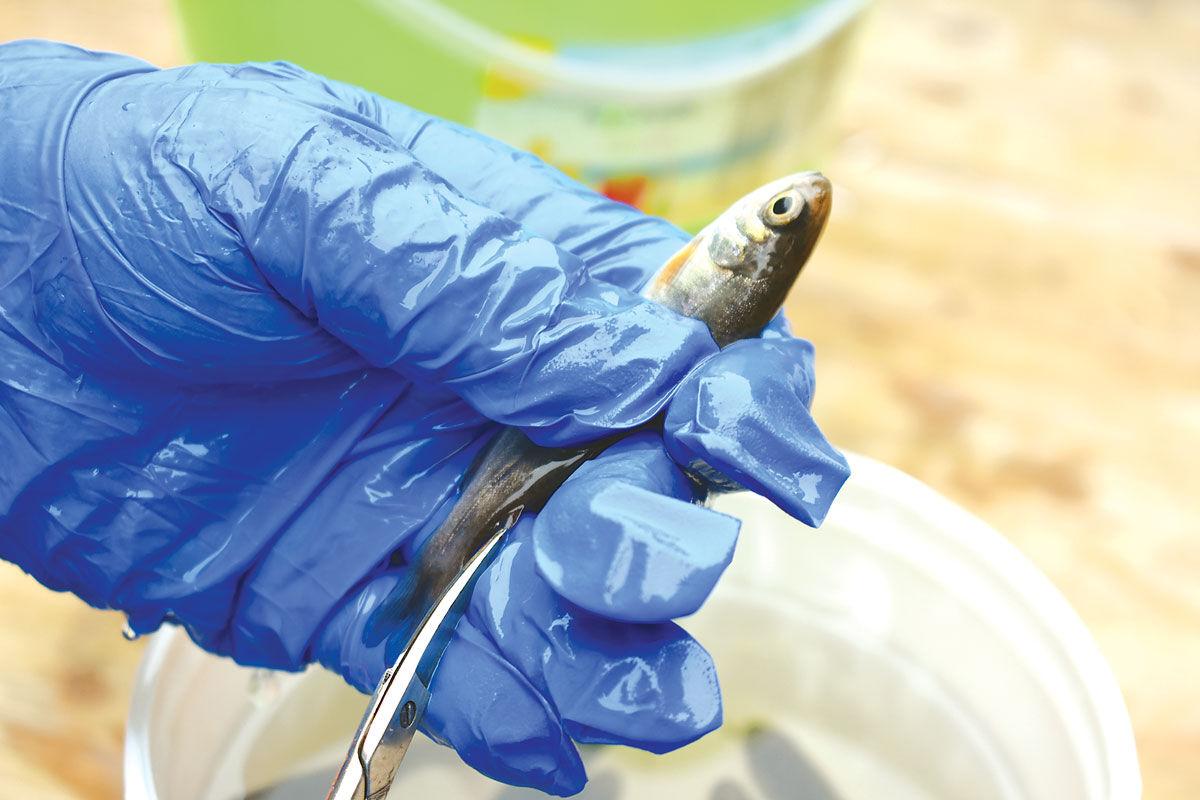 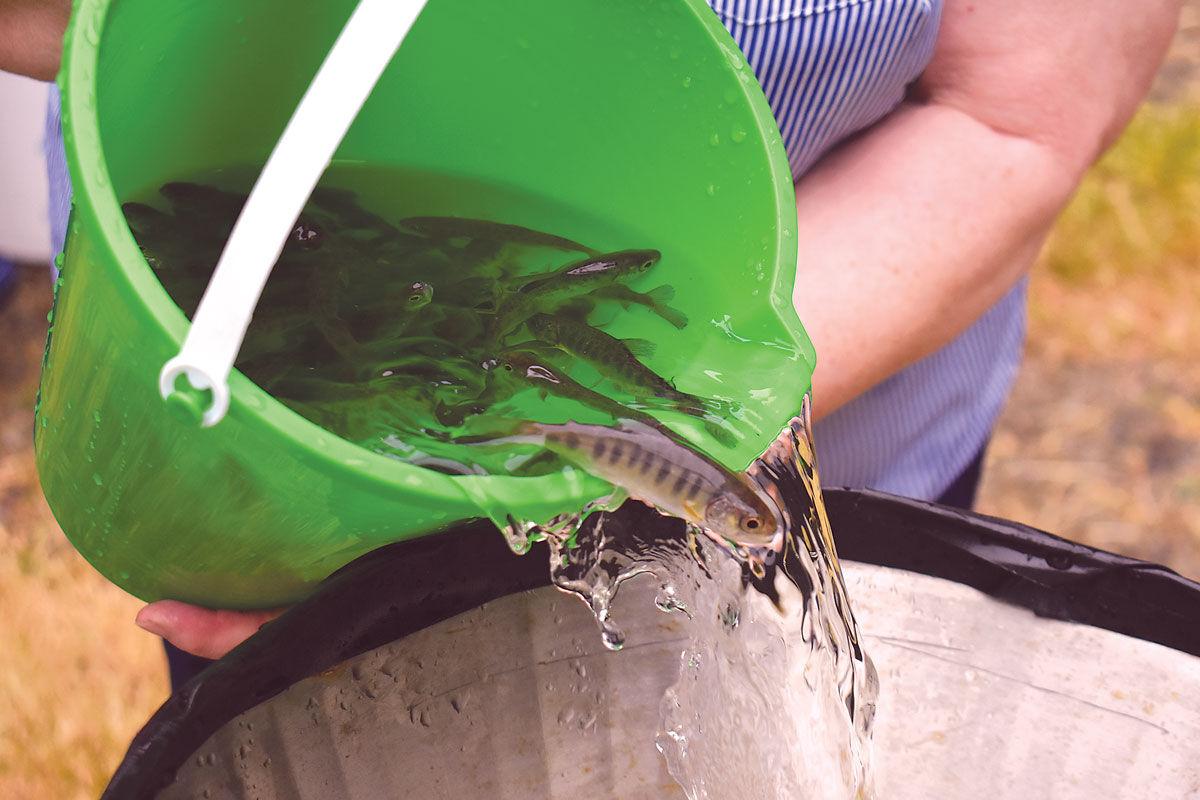 Clipped coho salmon smolts are released into a pipeline leading to the Depoe Bay reservoir. (Photo by Mathew Brock)

A member of the Depoe Bay Salmon Enhancement Commission transfers a net full of salmon smolt from a holding pen to a bucket so volunteers can clip their fins. (Photo by Mathew Brock)

Clipped coho salmon smolts are released into a pipeline leading to the Depoe Bay reservoir. (Photo by Mathew Brock)

Depoe Bay first began its local Salmon and Trout Enhancement Program 40 years ago, which stands today as one of the longest running programs of its kind in the state. Having raised dozens of generations of coho salmon in the city’s reservoir since it began in 1981, the program does its part to help sustain Oregon’s ecosystem and increase the popular sport fish’s ocean population.

On Saturday, dozens of people from Lincoln County and beyond showed up at the Depoe Bay reservoir to celebrate the program’s 40th anniversary and participate in its annual fin-clipping event. Volunteers of all ages spent the day wrangling tiny fish and clipping their adipose fins before releasing them into the wild.

“It’s my first time out doing this since I’m usually out of town when they hold it, but I’m so glad I was in town this year and got to be a part of making this happen,” Short said. “It’s an honor to have these fellows on the commission who are willing to be out here and make this happen for 40 some years. What a treasure to have in our community and our water source and what a bounty of seafood to get out there to either come back to our community or to put out there to feed somebody somewhere.”

According to Salmon Enhancement Commission member Vaughn Robison, 43 volunteers stopped in over the course of four hours Saturday to collectively clip 11,531 fins off the backs of the program’s hatchery salmon. A salmon’s adipose fin is vestigial, with no purpose, which makes clipping it a good way to mark the fish as hatchery-raised and allow sport fishers to know which of the fish they can catch and keep.

Before clipping, the salmon are briefly placed into an anesthetic solution to help numb them and make them lethargic enough to clip. After that, they’re returned to a bucket of regular water to recover before being sent through a pipeline back into the reservoir. Those concerned about fish swimming about in the city’s drinking water shouldn’t worry, as the fish are helpful in maintaining water quality, and the water is properly treated at the nearby water treatment plant long before making its way to local taps.

“I can’t speak highly enough of the importance of this species,” Robison said. “They’re important to hold all these ecosystems together and important in a social way, as well. This program is one that helps hold this community together. One of the most important things about this event is to see people of all walks of life and all ages gathering around and engaging with a common interest, regardless of the reason they think salmon are important. There’s no wrong way to value our salmon, other than not valuing them at all.”

Depoe Bay sources around 20,000 eggs from Trask River Hatchery near Tillamook every year to raise its stock of salmon smolts, first in hatch boxes and then in a net holding pen kept in the reservoir. When adequately grown and clipped, the smolts are released into the greater waters of the reservoir. The program releases an average of 13,000 fish per year, occasionally reaching as many as 18,000 a year.

Many of those young salmon are eaten by the trout that live in the reservoir, but when the winter rains hit every year, those that remain are usually flushed out of the reservoir and make their way downstream before they end up in the Pacific Ocean and become a part of the larger ecosystem. Robison noted many ultimately end up caught by local sport fishermen, and very few released from Depoe Bay end up returning to Lincoln County.

“Salmon are a keystone species and are an integral part of these local ecosystems,” Robison said. “After we dump them into the reservoir, hungry cutthroat trout prey on them as one of their natural food sources. Without that, the trout would have an incomplete diet and an incomplete life history. As they make their way downstream, they also end up preyed on by different birds and other animals, like kingfishers.”

Beanie Robison, Vaughn’s father and a member of the Depoe Bay Salmon Enhancement Commission since its creation in 1981, said the program has helped restore a lot of the habitat affected by logging in the 1950s. He said a lot of the good done is thanks to the many great volunteers that have come and gone since then.

In the grander scheme of things, Beanie said the 10,000 plus fish Depoe Bay releases every year likely don’t make much of a difference, but the program’s capacity to educate the public and inspire future generations to think about conservation will always be invaluable.

“We do more than just fin clipping up here. This program alone isn’t going to save the fish, but it will educate the public. It’s good to see the city council come out and embrace it as well. It’s helpful and it’s fun, too,” Beanie said. “It’s really important to get those young people out here to see that Depoe Bay is doing what it can. It’s part of a community effort, all the way from city hall to the volunteers, and we’re giving back. We’re glad we can do it, and I think any community that can should have a program like this.”

Jessica Evank, from Waldport, was among Saturday’s volunteers, and she is currently on track to begin a marine science program in September. She hopes to one day work at a fish hatchery on the Oregon coast and was glad to have an opportunity to get some hands-on experience.

“It’s helpful, and it’s fun, too. It’s good to find something local where I can work with fish,” Evans said. “I recently moved here, too, so its good to get out and meet people.”

Vaughn Robison said the fin clipping is by far the commission’s largest event of the year, but it holds multiple less formal events as well. He hopes to use the momentum from the program’s 40th anniversary to expand community involvement. For example, the program works with Neighbors For Kids, an after school program in Depoe Bay, to hold various educational programs for local children.

To learn more about the commission and its annual efforts, go to https://www.instagram.com/depoebaysalmonenhancement