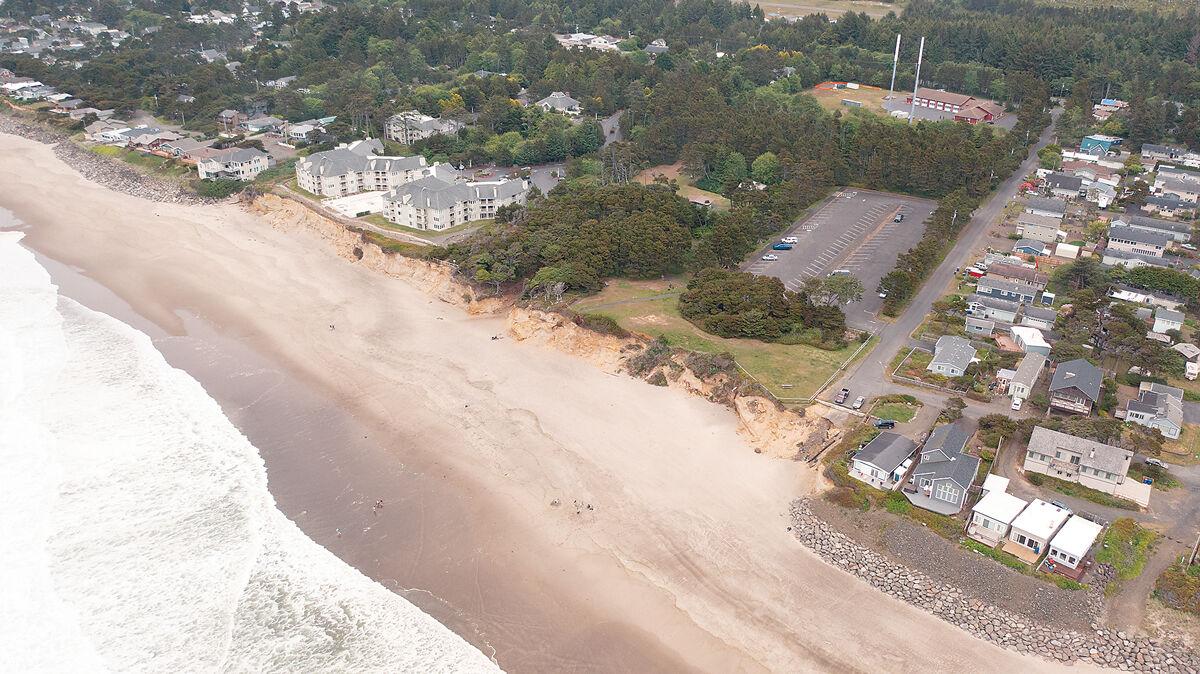 A naked stretch of beach in front of the WorldMark Gleneden Resort and Gleneden Beach State Recreation Site breaks up the otherwise armored shoreline in the Gleneden Beach area. (Photo by Casey Felton) 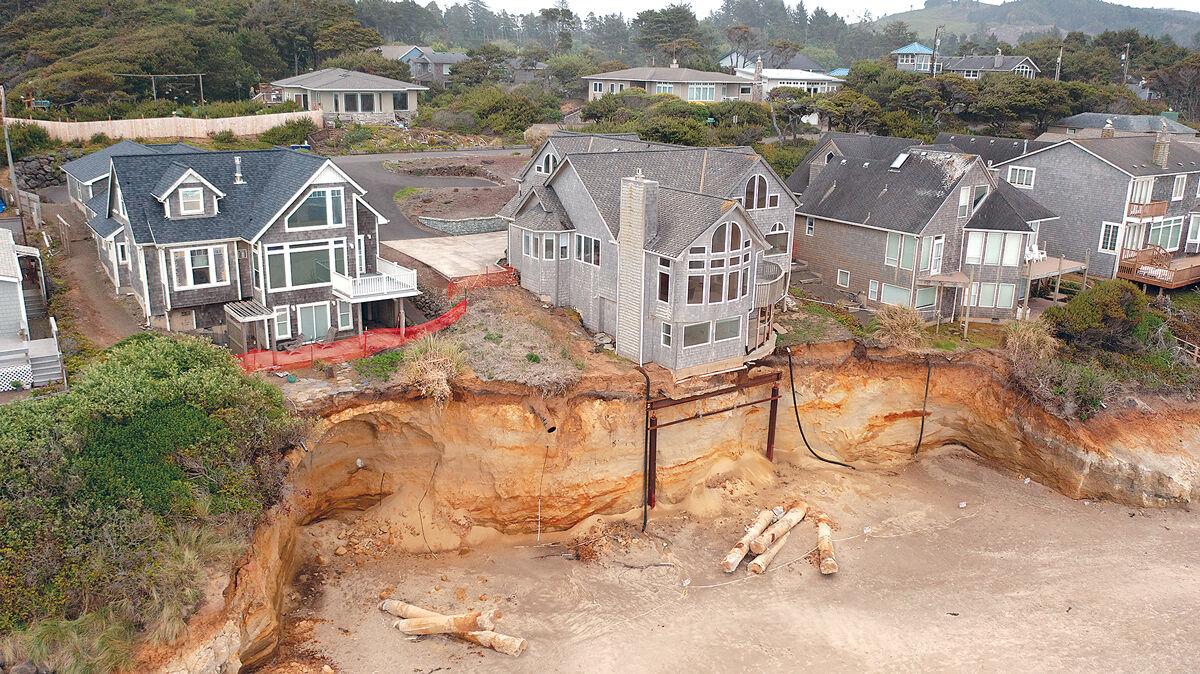 A property owned by the Grant family is stabilized by a temporary support structure after a seawall on the property collapsed in early March. The Grants and three other adjacent homeowners are seeking Goal 18 exceptions to help guard against further erosion. (Photo by Casey Felton)

A naked stretch of beach in front of the WorldMark Gleneden Resort and Gleneden Beach State Recreation Site breaks up the otherwise armored shoreline in the Gleneden Beach area. (Photo by Casey Felton)

A property owned by the Grant family is stabilized by a temporary support structure after a seawall on the property collapsed in early March. The Grants and three other adjacent homeowners are seeking Goal 18 exceptions to help guard against further erosion. (Photo by Casey Felton)

LINCOLN COUNTY — Three Lincoln County applicants are seeking an exception to one of Oregon’s strongest environmental protection laws to gain permission to save their properties from the ever-encroaching ocean and eroding coastal cliffside by installing shoreline armoring along the adjacent beach.

The Lincoln County Planning Commission will hold a public hearing on Monday, June 14, at 7 p.m. to discuss the topic. And, in a rare turn of events, the Oregon State Department of Land Conservation and Development sent a letter to the county Monday night agreeing with a county staff report that noted the circumstances of the three applicants are unique and compelling enough to warrant an exception to the state’s Goal 18 dune and beach protection laws.

The staff report in question details a difficult reality: due to extensive existing shore armoring in Gleneden Beach, a history of sand mining in the area and a myriad of uncontrollable natural forces, that stretch of beach is doomed.

Experts quoted in the report state the beach will eventually, at most, only be visible during low and minus tides. The addition of more riprap in the three excluded areas owned by the applicants would have no impact on these factors, the report explains.

WorldMark Gleneden Resort, Searidge Condominium and a group of four families that own properties recently put in danger after a seawall collapse in March make up the three applicants for the Goal 18 exceptions. Collectively, they are seeking permission to add riprap to three naked stretches of beach in the Gleneden-Lincoln Beach area that are surrounded by properties already armored with riprap.

Unlike their neighbors, these properties are currently restricted from adding riprap due to a 1977 cutoff date outlined in Goal 18. This administrative rule is backed by law and restricts the construction of shore armoring for properties that were developed after that date. The Gleneden-Lincoln Beach area was mostly developed right after World War II and far before the 1977 cutoff date when the market for beachside homes increased.

The applicants submitted an extensive application to the county, detailing a wide array of arguments for the Goal 18 exceptions, many of which the county and DLCD explicitly said disagreed with. However, both ultimately agreed that because of the development history for that beach and the fact it is actively being destroyed, granting of the Goal 18 exceptions to these applicants would make no real difference at this point.

The staff report put together by the Lincoln County Planning Department documents in great detail and with expert testimony from shoreline engineers and researchers an explanation of what is happening at the beach. It states the existing lengths of riprap on the beach have arrested the natural bluffs, depriving the beach of the sand they would naturally supply. While the amount of sand from the bluffs is normally quite low, the supply of sand that would normally be recycled onto the beach from the ocean was already depleted during a 1965 to 1971 mining operation that removed an estimated 84,000 cubic meters of sand from the area, contributing to steepening of the beach and increased wave energy leading to advanced erosion.

In addition to those two manmade factors, the report states the sea level is rising, climate change is causing winter storms to become more intense and El Niño events that occur every 20 years have created severe erosion events.

“Yes, Onno, that’s what that says. That’s why I put that statement in the conclusion,” Gless replied.

Gless went on to agree with the assessment of George Priest, a retired geologist specializing on the Oregon coast who lives in Newport, that the only way to “save” the beach would be to remove all riprap and resupply the mined sand, a scenario most would agree won’t happen.

Jonathan Allan, a coastal geomorphologist from the Department of Geology and Mineral Industries, also contributed to the discussion. Allan noted the disappearance of the beach has a lot to do with the natural factors, such as severe storms pulling sand offshore and sand being pushed north into Siletz Bay. Allan does agree with the other experts, but predicts the entire beach will probably not disappear. Instead, in time the beach in Gleneden Beach will only be a wet sand beach visible at low or minus tides.

Now that the county has reviewed the information from the three applicants and compiled its staff report, it plans to broadcast and archive the Monday hearing on the county’s official YouTube channel.

Husing encourages anyone wishing to express their views to provide written testimony to the planning department before June 14. While live testimony will be permitted during this electronic hearing, there are time constraints, which is why Husing hopes people will submit their views in writing to ensure they get into the record.

To learn more about the public hearing and how to watch or participate, go to: https://www.co.lincoln.or.us/pc/page/goal-18-exception-public-hearing

To view the county’s staff report on the Goal 18 exceptions or to read the state’s letter, view the online version of this article or go to tinyurl.com/4njx594t.