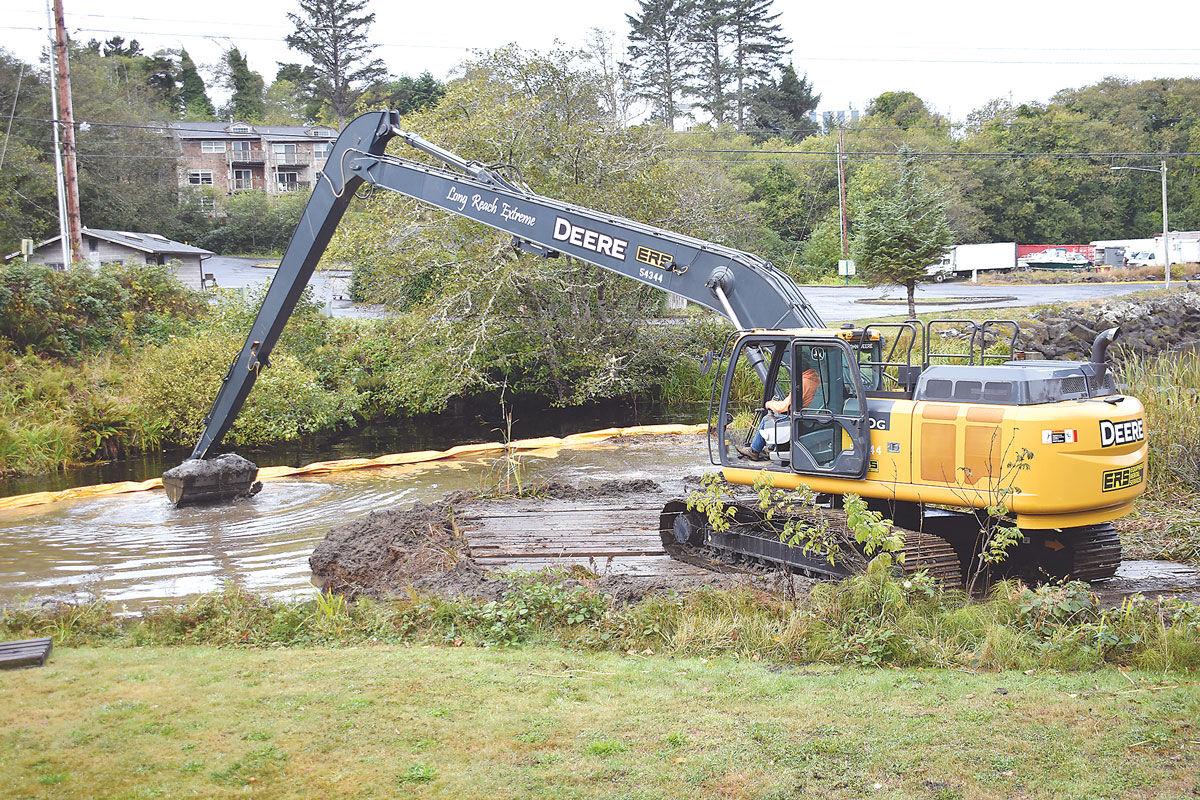 An excavator scoops 15 years worth of sediment out of the Depoe Bay check dam. (Photos by Mathew Brock) 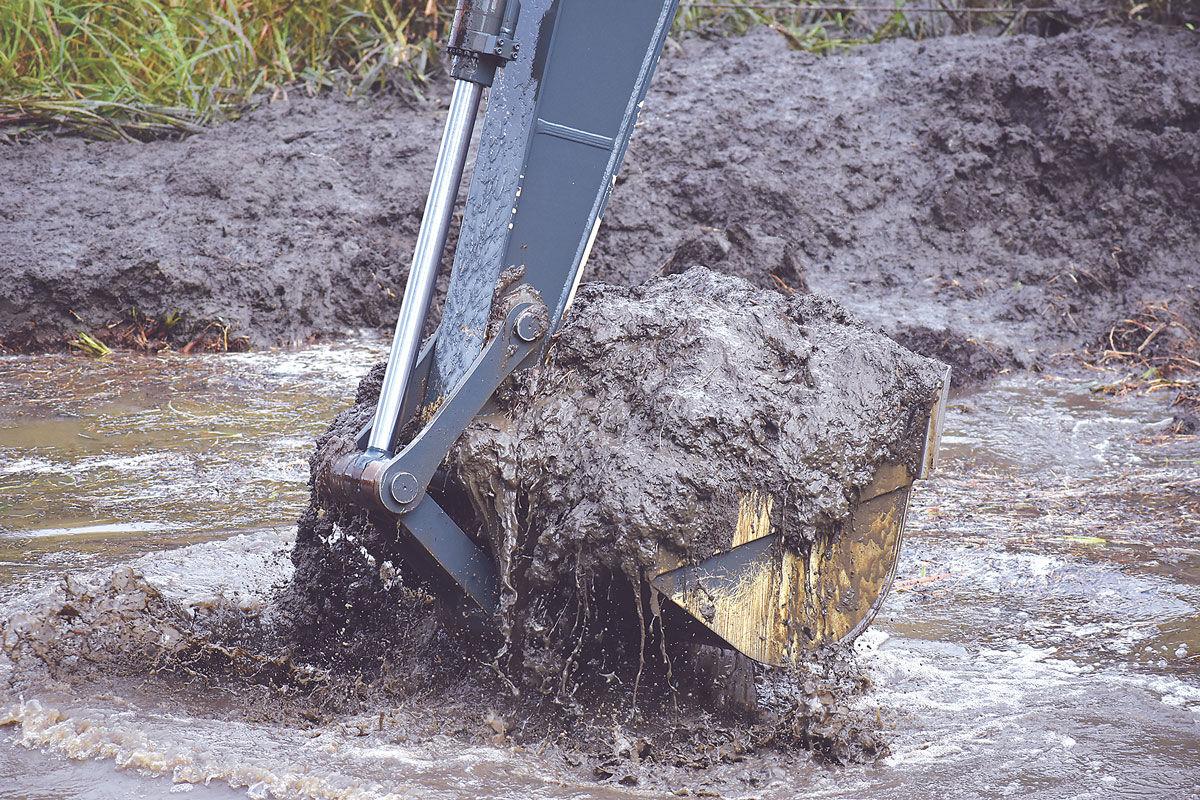 A bucketful of mud is drawn up from bottom of the check dam. 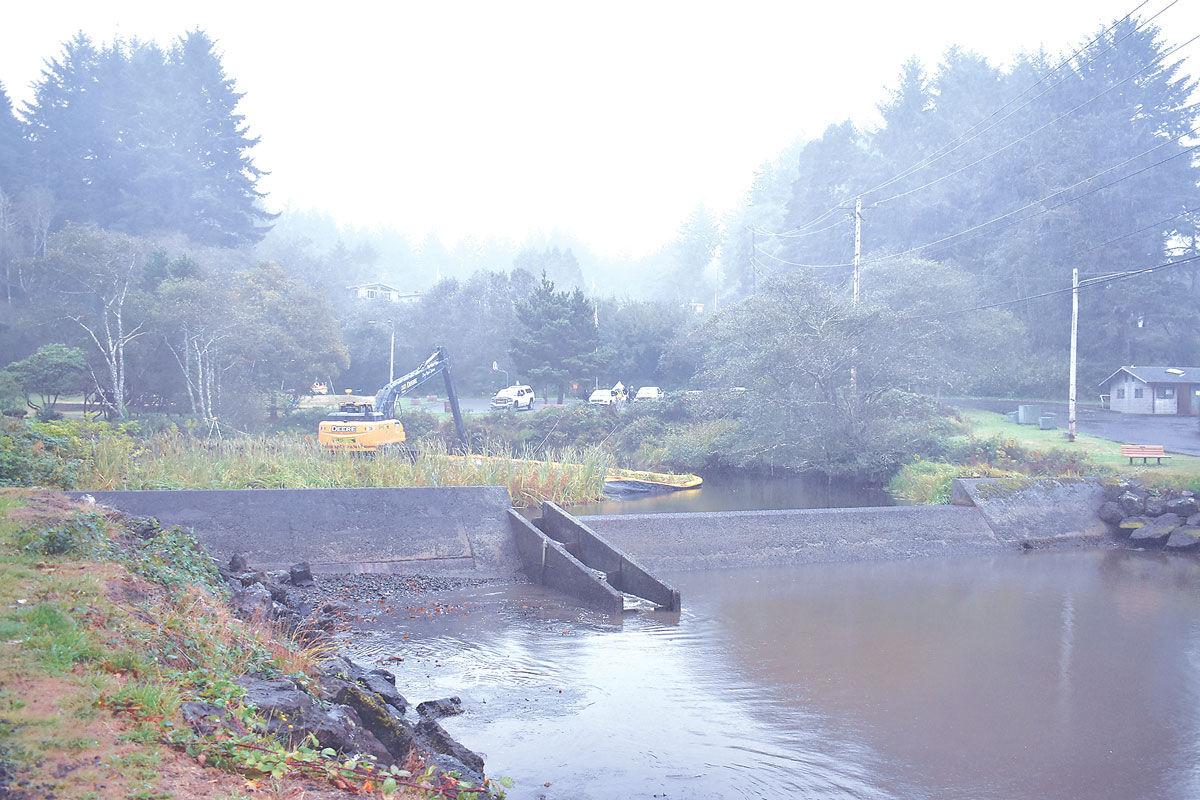 The Depoe Bay check dam traps sediment from upstream and keeps it from flowing into the harbor.

An excavator scoops 15 years worth of sediment out of the Depoe Bay check dam. (Photos by Mathew Brock)

A bucketful of mud is drawn up from bottom of the check dam.

The Depoe Bay check dam traps sediment from upstream and keeps it from flowing into the harbor.

DEPOE BAY — The U.S. Army Corps of Engineers and its contractors have been working over the last week to conduct a dredging of the Depoe Bay check dam, which feeds into the world’s smallest navigable harbor.

Check dams, such as the one at Depoe Bay, are generally scheduled to be dredged every 10 years, though the time between cleanings varies slightly depending on how much federal funding is available in a given year. The last time the Depoe Bay dam was dredged was in 2005, though another part of the harbor was dredged in 2019.

The process will remove a total of 2,000 cubic yards of material from the dammed up area, which has collected upstream sediment over the last 15 years to prevent it from excessively collecting in the harbor. Said material will fill around 200 transport trucks as it’s hauled to nearby timber land to be disposed of.

“We do this so we don’t have to dredge the harbor near as often,” USACE Project Manager Greg Speer said. “We make sure to test the sediment ahead of time to ensure its not contaminated. If the dam wasn’t here or if we didn’t dredge every 10 years, the sediment would spill out and flow out the entrance to the fuel dock and out into the harbor.”

To conduct the dredging, USACE contractors constructed a small wooden platform out into the water and drove an excavator onto it before setting up a net-like barrier in the water to prevent the turbid water from mixing with the regular water during the dredging process. From there, the excavator works its way toward the shore as it removes sediment one scoop at a time.

“They went the extra mile to do all this for the public instead of tearing up the nearby peninsula,” Speer said. “They’ll dredge in almost a semicircle and back themself out before picking up the timber and backing themselves out. This will really help minimize the cleanup work they’ll have to do afterwards.”

The process began on Sept. 27 and usually takes about one or two weeks, according to Speer. He hopes to have the majority of work finished by the end of this week so he can begin conducting a post-dredge survey and follow it up with a survey of the harbor to prepare for its next dredging.

The check dam dredging was originally scheduled for Sept. 13, but it was rescheduled twice due to permit requests from the Oregon Department of Forestry and rescheduling difficulties with the contractors.

During the dredging, the footbridge, playground area, gazebo and nature trail at the Depoe Bay City Park are closed and cordoned off as a safety precaution. Those areas should reopen this Friday, when the project is scheduled to conclude.