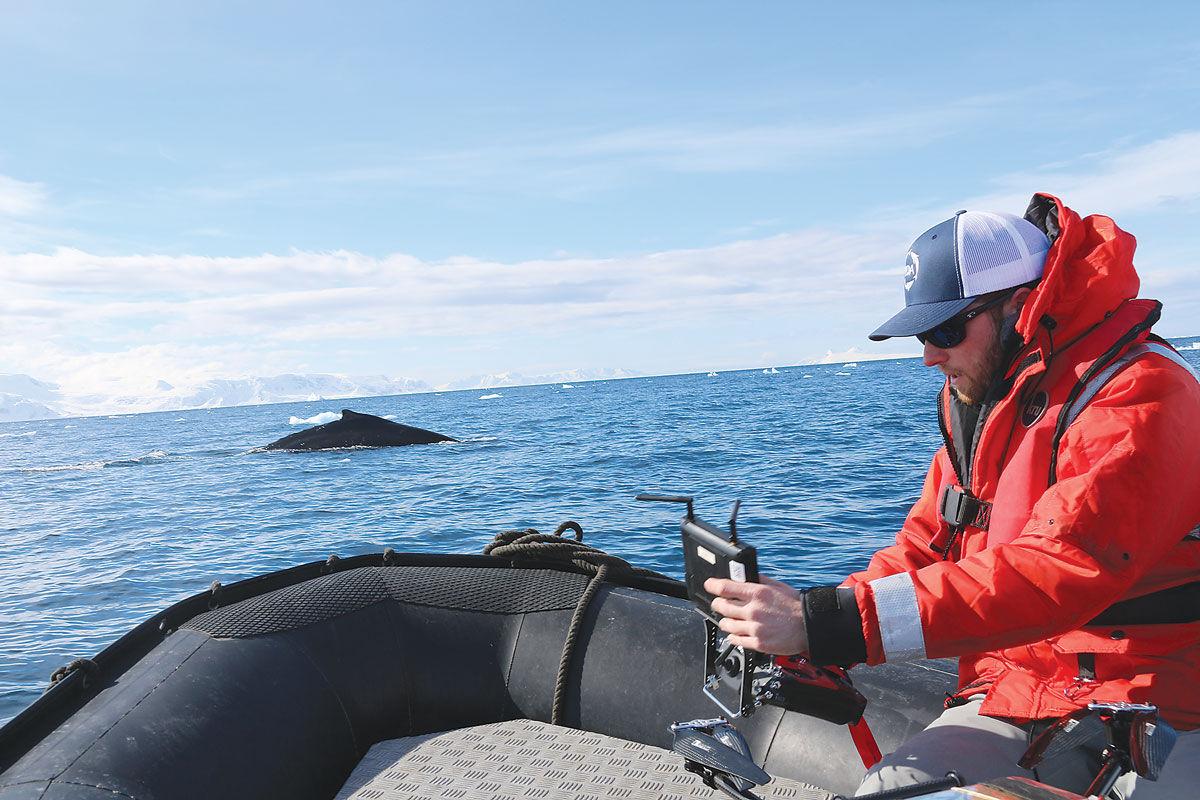 KC Bierlich, a Postdoctoral Scholar at the Marine Mammal Institute, Hatfield Marine Science Center, Oregon State University, pilots a drone in the Western Antarctic Peninsula as part of a research team studying how much prey baleen whales eat.  The research provides a deeper understanding of the ocean ecosystems that maintain whales might aid conservation efforts. 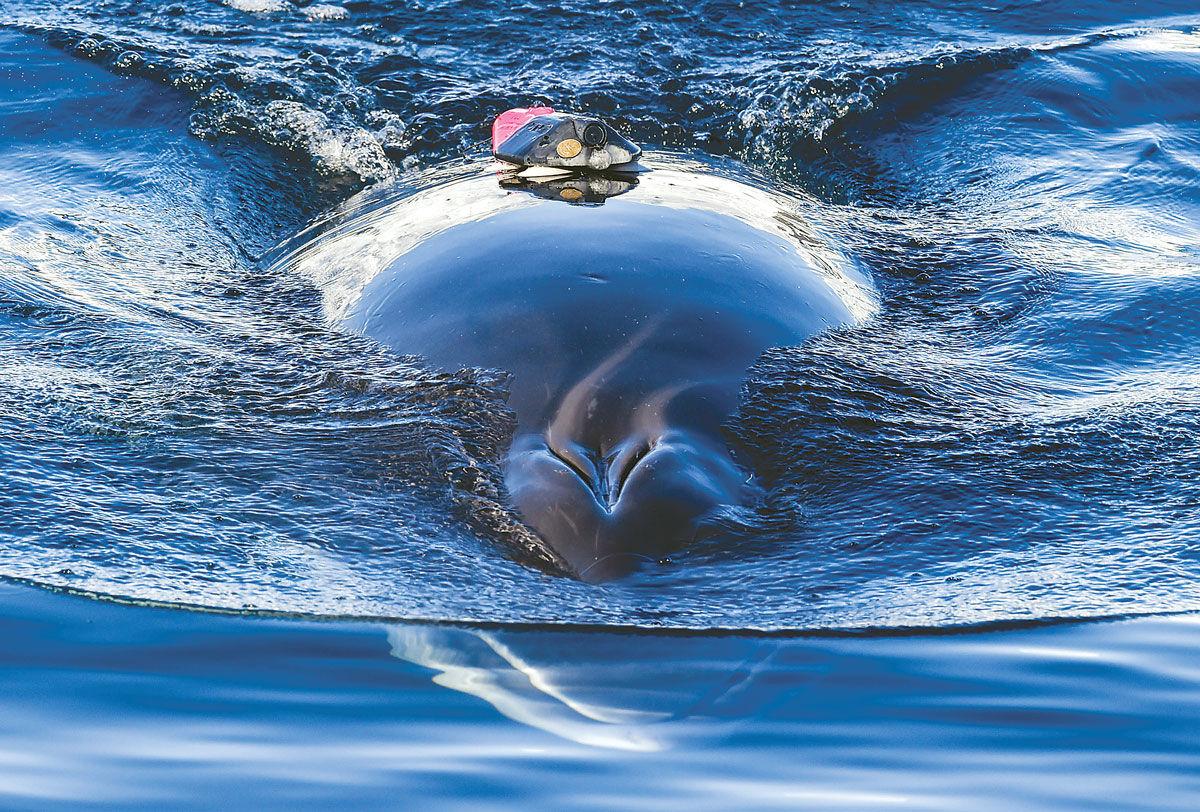 A minke whale tagged by the research team off the coast of Antarctica in 2019. 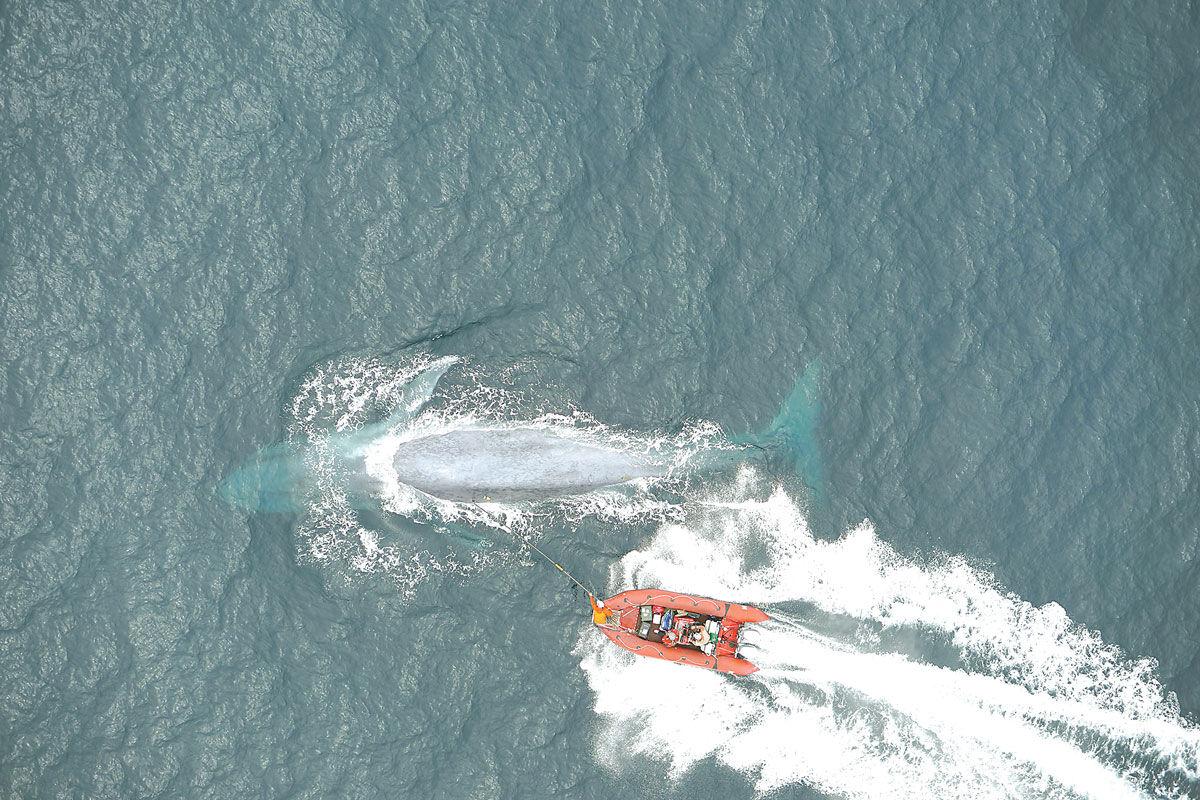 Scientists investigate a humpback whale by boat and drone in the surface waters near the West Antarctic Peninsula. 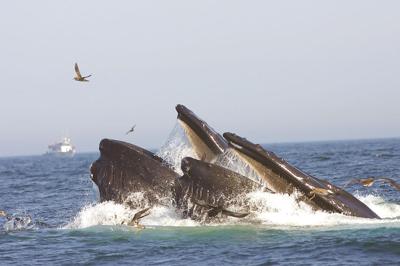 Researchers in the Western Antarctic Peninsula use a drone to measure the length of baleen whales as well as their mouth sizes to help determine how much prey they consume. The study showed whales eat three times more than previous thought.

KC Bierlich, a Postdoctoral Scholar at the Marine Mammal Institute, Hatfield Marine Science Center, Oregon State University, pilots a drone in the Western Antarctic Peninsula as part of a research team studying how much prey baleen whales eat.  The research provides a deeper understanding of the ocean ecosystems that maintain whales might aid conservation efforts.

A minke whale tagged by the research team off the coast of Antarctica in 2019.

Scientists investigate a humpback whale by boat and drone in the surface waters near the West Antarctic Peninsula.

New research recently published in the journal Nature shows evidence that the world’s largest baleen whales eat more than previously thought. And that discovery may shed new light on the key role whales play in the ocean ecosystem.

According to a press release from the Smithsonian’s National Museum of Natural History, baleen whales, which include blue, fin, gray, and humpback whales among others, eat an average of three times more food each year than scientists previously estimated — up to 16 tons a day for blue whales. And because they are eating more, they also poop more, and whale poop is a crucial source of nutrients in the ocean.

Baleen whales feed on tiny, shrimp-like crustaceans called krill. When whales eat the iron-rich krill, they convert prey protein into blubber then defecate the iron-rich remains. The excrement is suspended close to the surface, where it can provide a source of iron for phytoplankton such as diatoms and drive diatom blooms. Diatoms, in turn, can move iron along the food chain when they are eaten by krill, which also excrete iron in their feces.

“While it may just seem like a fun trivia fact, knowing how much whales eat is an important aspect of ecosystem function and management,” Matthew Savoca, a postdoctoral research fellow at Stanford University and corresponding author of the paper, told ZME Science. “If we want to protect whales and make sure they are thriving in modern oceans, then knowing how much food they need to survive and reproduce is critical.”

Prior to this study, estimates of just how much whales eat were built upon data obtained from metabolic models or direct analysis of the stomach contents of whale carcasses. Such data can give researchers a ballpark figure but, according to this paper, they are quite inaccurate.

Savoca and fellow researchers calculated daily food intake for seven baleen whale species, tagging and tracking 321 individual whales in the Atlantic, Pacific and Southern Oceans from 2010 to 2019. The tags contained a camera, microphone, GPS, and an accelerometer that tracked the whale’s movement. Their data also included drone photography, which was used to measure their lengths, mouth areas and how much prey they could engulf. Using all the combined data, researchers were able to determine how often the whales were feeding, how much prey they could potentially consume while feeding and how much prey was available.

KC Bierlich, currently a postdoctoral scholar at the Marine Mammal Institute, Hatfield Marine Science Center, Oregon State University, was a Ph.D. student at Duke University when he contributed to the project. His role was piloting the drone to collect aerial imagery of the tagged whales and then conducting photogrammetry analysis to measure their lengths.

Bierlich said the study of whales — the largest known animals — has been extremely difficult compared to terrestrial mammals. “It is so hard to study specifically blue whales who are several miles offshore. They dive for a long time then come to the surface for a short time then they’re gone. They aren’t just hanging out at the surface,” Bierlich said.

For this study, Bierlich researchers used tags that were attached to the whales with strong suction cups using a long carbon fiber pole. The tags remained adhered to the whales for up to a day, and researchers were able to record the whales’ every movement. “It can record a ton of data. When it comes off, it floats on the surface. Scientists can retrieve it, record the data, then reuse it. These were a huge benefit in this study because they were reusable and noninvasive.”

Overall, baleen whales eat between 5 to 30 percent of their body mass every day. “They are eating so much more than we thought. It’s crazy,” Bierlich said. “So there has to be that much food in the ocean for them to do that.”

The findings also put into perspective just how massive an impact whaling in the 20th century has placed on whales and, by extension, on the ecosystems they inhabit. “Most whale populations are still recovering from commercial whaling,” Bierlich explained. “If they are eating way more than we thought, what was it like in the 1900s when there were 2 million more whales around, fertilizing the ocean with their poop? Oceans looked very different before we took the whales out of the water.”

The findings suggest that when there were a lot more whales eating krill, there must have been a lot more krill for them to eat. Savoca said the decline of krill numbers following the loss of so many of their biggest predators is known to researchers as the “krill paradox” and that the decline in krill populations is most pronounced in areas where whaling was especially intense.

“This decline makes no sense until you consider that whales are acting as mobile krill processing plants,” said Savoca. “These are animals the size of a Boeing 737, eating and pooping far from land in a system that is iron-limited in many places. These whales were seeding productivity out in the open Southern Ocean, and there was very little to recycle this fertilizer once whales were gone.”

Restoring whale populations could also restore lost marine productivity and boost the amount of carbon dioxide sucked up by the phytoplankton, which are eaten by the krill. Nicholas Pyenson, curator of fossil marine mammals at the Smithsonian’s National Museum of Natural History and co-author of the study, said if whale populations can be restored to pre-whaling levels, a huge amount of lost function to ocean ecosystems can be restored as well. “It may take a few decades to see the benefit, but it’s the clearest read yet about the massive role whales play on our planet,” Pyenson said.

Bierlich agrees. “Hopefully, this research will put more emphasis on protecting whales. More whales mean a healthier ocean,” he said.  “Healthier oceans help the entire ecosystem and ultimately help all of us.”

The entire article about baleen whale prey consumption can be found at https://www.nature.com/articles/d41586-021-02951-3