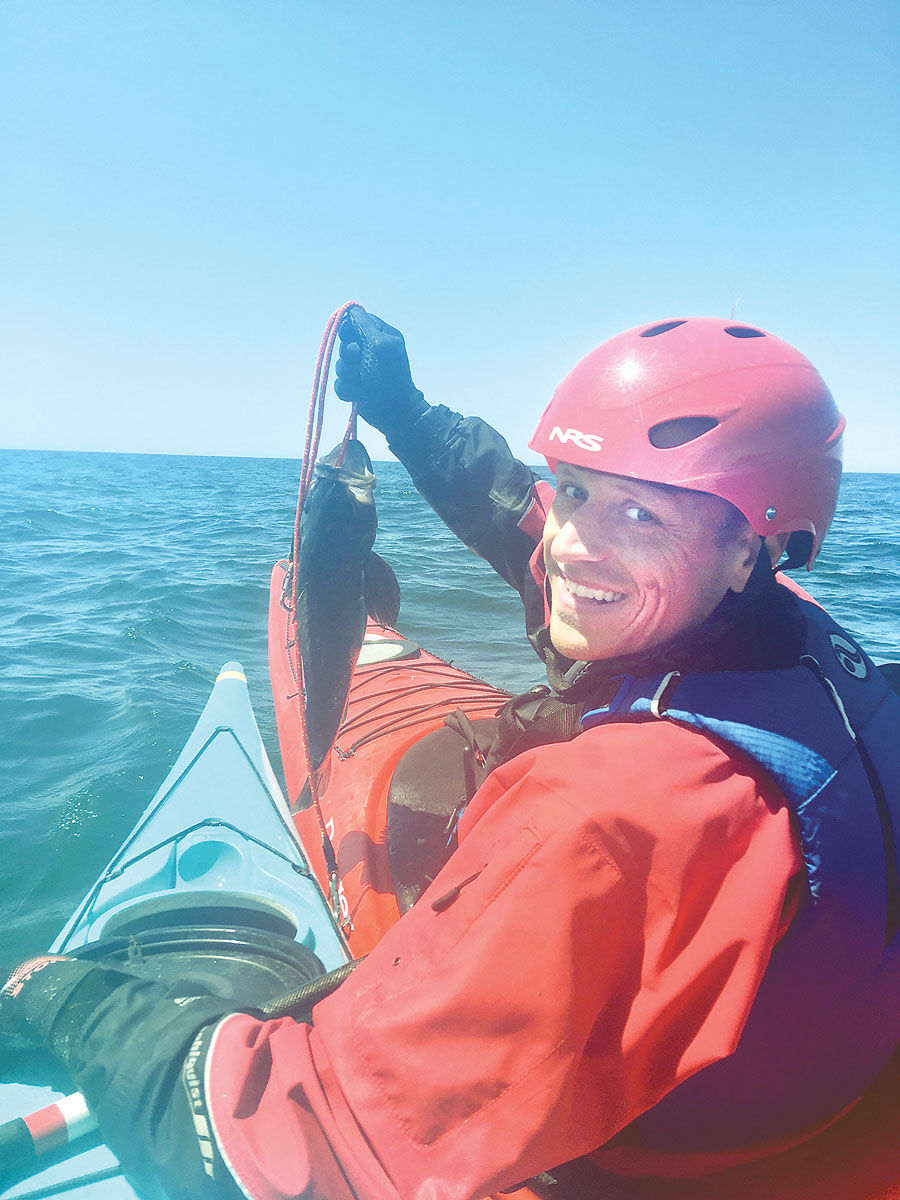 Paul Lask catches a cabezon on his handline, but salmon remains elusive. 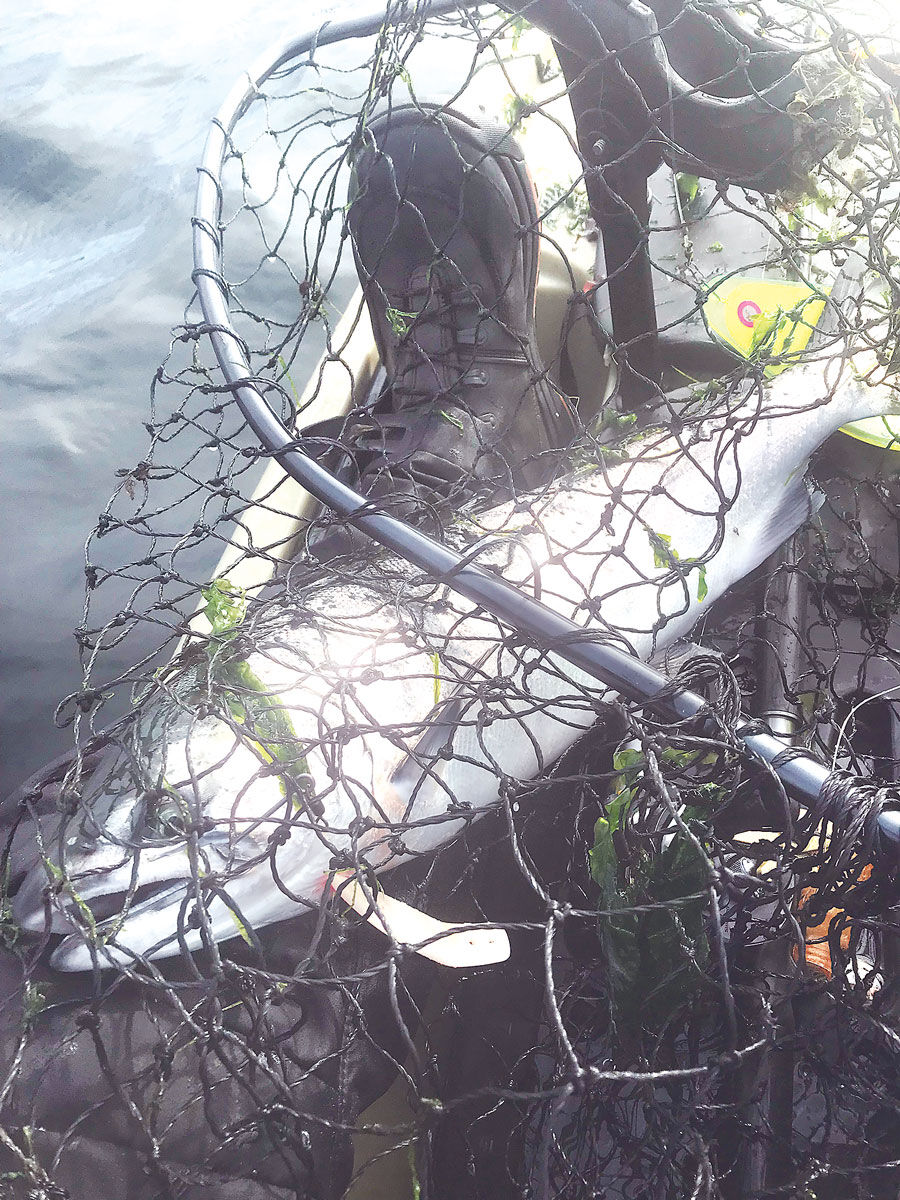 A coho salmon, caught from a kayak on a regular rod and reel setup, is netted.

Ocean kayak fishing along the Oregon coast can present challenges, such as waves pounding the rocks, making for a difficult landing.

Paul Lask catches a cabezon on his handline, but salmon remains elusive.

A coho salmon, caught from a kayak on a regular rod and reel setup, is netted.

We pulled our kayaks down to the beach shortly after 7 a.m. High tide recently left the beach strewn with dark green seaweed and knee-high sand ledges. The swell forecast hovered around three to four feet at 8-second intervals, while wind waves were predicted a foot or two taller.

As we readied gear, I timed the larger sets. The beach was dumpy, meaning the waves did not spill in smooth crests but reared up and slammed down. I liked launching from Fogarty Creek because of a deep-water channel that made entering and exiting a relatively safe prospect. But it didn’t take much swell to remind me that shooting the channel, a 20-yard hall hemmed in by reef and rock, was a thing of timing where misfires had consequences.

After zipping up my drysuit, I slid down into my boat. I dug my paddle blade into the sand while scooching forward, waiting for the launch window to open. Despite our best efforts to time it, we still got wave-punched. Wes’ sit-on-top kayak took on enough seaweed to clog its scuppers, the outflow portals that discharged excess water. My boat emerged a swamp-thing. But I was in a closed-deck kayak, so much of the water fanned over my spray skirt and across the top of the boat. We paddled swiftly out of the channel into the open ocean.

Fierce fishing along the coast

Ocean kayak fishing along the Oregon coast is a condition-dependent art. Summers are ideal for low swell, but as we would soon be reminded, wind and fog can cause problems for small and large boaters alike. A week earlier, two commercial fishing boats collided in foggy conditions 12 miles west of Newport. Though no one was injured, the Coast Guard deployed multiple rescue boats, deeming it an all-hands-on-deck situation, as one of the fishing boats was taking on water.

We were just north of rugged Boiler Bay, where the boiler of a 600-ton steamship exploded in 1910. The boiler can still be seen during very low tides. The bay was tucked in the shadow of the 500-foot tall Cape Foulweather, the first Oregon landmark spotted in 1778 by Captain Cook, so named for the wild weather and rough seas.

As fierce as our seas are, the Aleutian Islands, where kayaking arguably began, are rougher. According to author-adventurer Jon Bowermaster, for over 5,000 years, natives of the Aleutians plied their waters in crafts made from animal skins and bones. Though construction materials have changed, aspects of today’s kayaks remain the same — their lightweight and easily maneuverable design carries over from the Aleutians. Kayaks also offer a platform for relatively cheap fishing.

While not as resourceful as the Aleuts — they fished for halibut with bone hooks at the end of braided giant kelp strands — I have discovered a minimalist method for catching fish that has also been around since pre-modern times. Fishing with a Cuban-style reel called a Yoyito, a 3.5-inch diameter handline (no rod is attached) has been sufficient for catching cabezon, lingcod and rockfish off the Oregon coast.

Wes and I were fishing for salmon. We did not know if catching salmon on my handline was possible, though we were about to find out.

We paddled toward a horizon dotted with a handful of big charter boats fishing a productive reef that curved southwest. I let out some of my 30-pound monofilament line. Thick neoprene gloves kept the line from cutting my hand as I trolled. The reel was made of aircraft grade aluminum to protect from corrosion, and was tucked into a little bag clipped to my spray skirt with a carabiner. I pinched the line between my thumb and paddle shaft while I paddled.

We stayed a bit north of the charter boats, looking for diving seabirds. Wes said he had not caught salmon when gulls were around, and so far this was all we saw. By about three miles offshore, we spied murres and cormorants. Taking this as a hopeful sign, we trolled the area before deciding to turn and drift with the gathering wind.

Something hit my line hard. I shouted that I had a fish on, and started to pull it in. I realized I’d forgotten to open my collapsible net. Usually I heave the fish onto my spray skirt and kill it quickly, but Wes informed me this would be difficult with a salmon, and he had loaned me one of his nets.

At first it didn’t seem to fight, and I figured that it had spit the hook. Then it jumped, and Wes hooted. “Keep tension on it,” he said.

I continued gathering line. A flash of lightning shot beneath my boat. As I tried keeping an eye on the sporty fish, I started to feel a bit dazed, realizing I had made the mistake of focusing my vision on one thing too long while rocking in swell. Seasickness had begun.

I got the fish to the boat, where it promptly spit the hook and vanished.

I stared at the horizon to keep from getting queasier. The sun was breaking in and out of low swift clouds, and wind waves hissed as they crested. I finally pulled in and untangled the rest of my line to redeploy it. After a few minutes, Wes had one on.

He pulled his rod from its holder and began reeling. The fish dove under his kayak as it neared the net, snapping the end of Wes’s pole. But he netted it. A moment later he bonked its head with his metal water bottle.

Heading home in a fog

We were high on the active fishing, but a thick fog had descended, and I had not completely shaken the seasickness. We passed through clouds of crab megalopae. Wes suggested running a few circles to see if salmon were feeding. I tried to keep my eye on a seawall holding a hotel from sliding into the ocean. This was a reference point loosely aligned to the channel back into Fogarty Creek. After paddling a few circles, fog had erased the wall.

Meanwhile, the charters were getting close enough to hear announcements made by the captain.

“Why don’t we get on a radio channel in case we lose contact,” I said to Wes.

After a quick radio check, we stowed our gear and started back.

It was soon obvious this was going to be a sketchy landing. Visibility was a quarter mile at best, our entrance still missing. Ahead and to the sides were 5-foot waves pounding rock. My helmet had been attached to the deck lines on the back of my boat. I unclipped it and pulled it on. I considered suggesting paddling far north to Gleneden Beach, where we would still have to make a blind landing, but at least on a sandy rather than rocky beach. Wes grabbed his phone.

A blue dot showed where we were, which was not far from the channel. The wind was pushing us toward reef — we needed to make our move. I had launched out of Fogarty Creek dozens of times and had to hope the run would deliver us where we needed to go. Since I ostensibly knew the route, and since he would want to keep eyes on my bright red boat, I took the lead.

We chose correctly. In un-dramatic fashion, we crossed past the reef into the cove. Through the fog I could faintly make out people hunching to pick up agates. It wasn’t until we landed on the beach that I began to relax.

We shared sketchy paddle stories as we pulled our boats up to the cars. The perfume from a group of girls having a beach photo-shoot reignited my seasickness, but I drank some water and tried to focus on the sturdy ground under my feet.

Wes offered to cut steaks off his coho. While driving to his place, I thought about how despite my years of ocean paddling, the sea kayak symposiums attended and safety courses taken and rolling practiced in the surf, the ocean continued to demand intense reverence even on “calm” days like today.

A connection with the past

I again thought of the Aleuts, whom Ken Brower in “The Starship and the Canoe” described as venturing out into “storm-breeding seas” in boats light enough to be carried under one arm. From these 15-foot vessels, sometimes for 24 hours at a time, they fished for halibut and cod, hunted whales with harpoons. They left sight of land to kayak “over the horizon regularly and on purpose.” They went as far as the Kamchatka Peninsula, Japan, San Francisco and Baja California.

This spirit of adventure and exploration has a mysterious pull on me, as it does for many Oregonians. Likewise, very old systems for catching fish today appeal to both survivalists and sport fishers. Sharing the story with my wife of my trip with Wes, sipping wine and slicing into soft salmon steaks with the sides of our forks, I re-stoked myself for my next outing.

Surely it’s possible to catch a salmon on a handline.

Paul Lask is a freelance outdoors journalist and writing instructor at Oregon Coast Community College. His work is at prlask.com, and he can be reached at paulrlask@gmail.com.