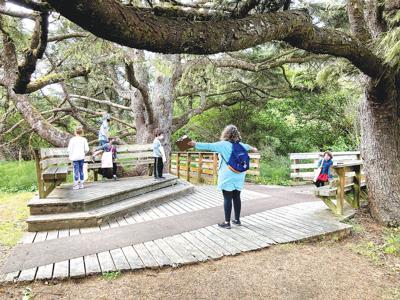 Campers from the Yachats Youth and Family Activities Program record a clue during a recent Quest. The self-guided Quests allow lifelong learners to explore parks, trails and other outdoor spaces in new ways and at their own pace.

NEWPORT — Whether you are a visitor to Lincoln County or a seasoned local, there are plenty of opportunities to learn about the Lincoln County area in a fun and interactive way.

Quests are fun and primarily outdoor learning adventures that use clues and hints to encourage participants to discover the natural, cultural and historical “treasures” of place and community.

Cait Goodwin, Oregon Coast Quest coordinator for Oregon Sea Grant at Oregon State University, said the quests are suitable for all ages and allow lifelong learners to explore parks, trails and other outdoor spaces in new ways and at their own pace.

“It is great for kids, adults and open to anyone,” said Goodwin. “It’s a clue-directed hunt with people being outside and finding some hidden treasure.”

Quests aren’t trinket trading exchanges like geocaching or letterboxing, explained Goodwin. At the end of each interpretive quest, participants find a hidden box containing a logbook to sign and a hand-carved stamp to mark their accomplishment. The only actual treasure is the fun of the walk and learning about special places in the community.

All the quests contain three types of clues: movement clues where the participant reads a map and follows directions; learning clues that provide historical or factual information; and letter clues where the questers collect letters that eventually spell a message on where to find the hidden box. Most quests take about 45 minutes to complete.

Once adventurers find the hidden box, they can sign a logbook and stamp their quest book to prove they made it to the end. Those who complete 10 or more quests are eligible to receive an Oregon Coast Quests embroidered patch.

There are 27 active quests in seven Oregon counties, with 11 of those in Lincoln County. Each quest is unique in content, with some focused on nature while others have an emphasis on history or architecture.

An informational tsunami quest based out of the Hatfield Marine Science Center is not only educational, but practical. “It is fun with family while talking and learning about a scary topic,” said Goodwin. “It’s like having a fire drill. We think we know something but haven’t practiced it. This allows you to think about things ahead of time and that starts a conversation. It’s empowering.”

There is also a historic cemetery quest in Lincoln County. “People have preconceived notions about cemeteries,” said Goodwin. “And people don’t usually recreate there. But there is so much to learn about math and history. And it has incredible views and plants.”

Avery Chandler, an area seventh grader, has participated in all Lincoln County quests and said he loves each one of them. “They are all so fun, but there are four that really stand out to me,” Chandler said.  “I like the South Beach quest and the HMSC quest because you get to explore different habitats, and you learn a lot about the ecosystem.” He also counts the Eureka Cemetery quest and the Bayfront quest as favorites.

Chandler said participants learn all kinds of facts about the history of the place where the quest is. “In the Eureka Cemetery quest, you get to visit Sam Case’s grave and get to learn about all of the amazing things he did, including building Sam Case Elementary School,” he explained. “Also, you usually get to hike and walk in some really cool areas.”

About 1,000 people participate in Oregon quests each year. Chandler said anyone who might be hesitant about trying a quest should just try one. “I don’t know any single person that has done a quest and not enjoyed it,” Chandler said. “They are fun, take an hour at most, and you learn a lot. And start off doing a simple one, like the HMSC Nature Trail quest. It’s fun, short and sweet.”

Goodwin suggests that anyone setting out on a quest check their website at seagrant.oregonstate.edu/education/quests for the latest information. “We have volunteers up and down the coast which is super helpful,” said Goodwin. “If there is something that we can’t correct immediately, such as a sidewalk repair, that will be noted online.”

The maps and directions needed to go on a quest are found in the Oregon Coast Quest guidebook, available at bookstores around the region. The newest guidebook costs $10 and has directions for all 27 hunts. The list of retailers can also be found on their website.

Chandler’s mother, Leigh Chandler, said the quests are a wonderful way to spend an afternoon. “Every time I have done one, I see a new place or learn something new about my community,” she said. “We always have fun together too, laughing and discussing the challenges, trying to find our way. It’s like an escape room, but free and outdoors. I just wish there were more!”

For more information about quests or to see the latest updates on specific quests, go to seagrant.oregonstate.edu/education/quests or contact Goodwin at 541-961-0968.