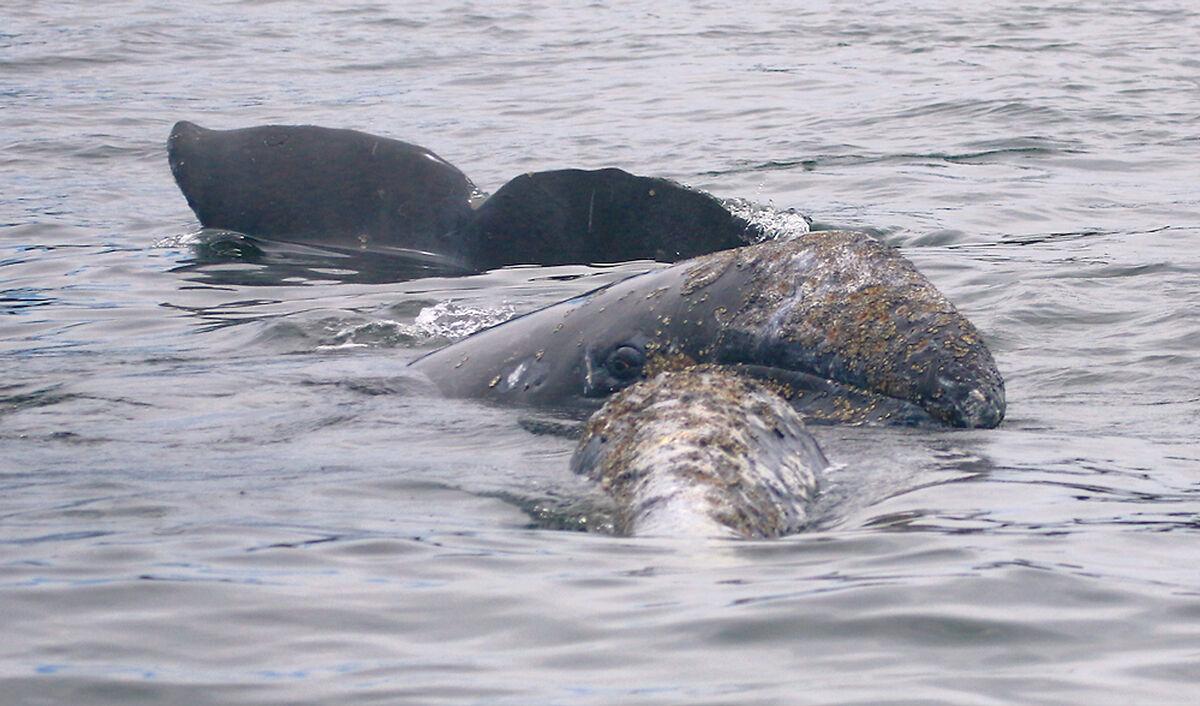 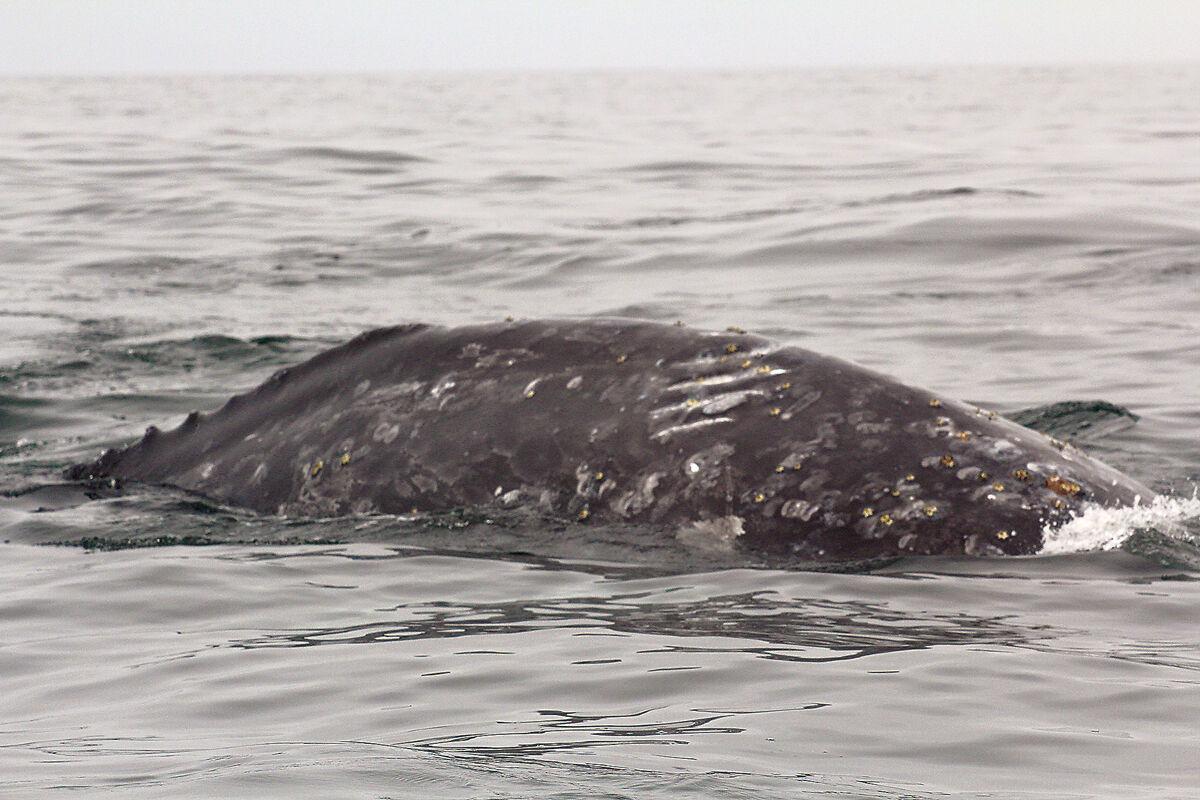 This image shows a propeller scar on Equal, an Oregon resident gray whale. 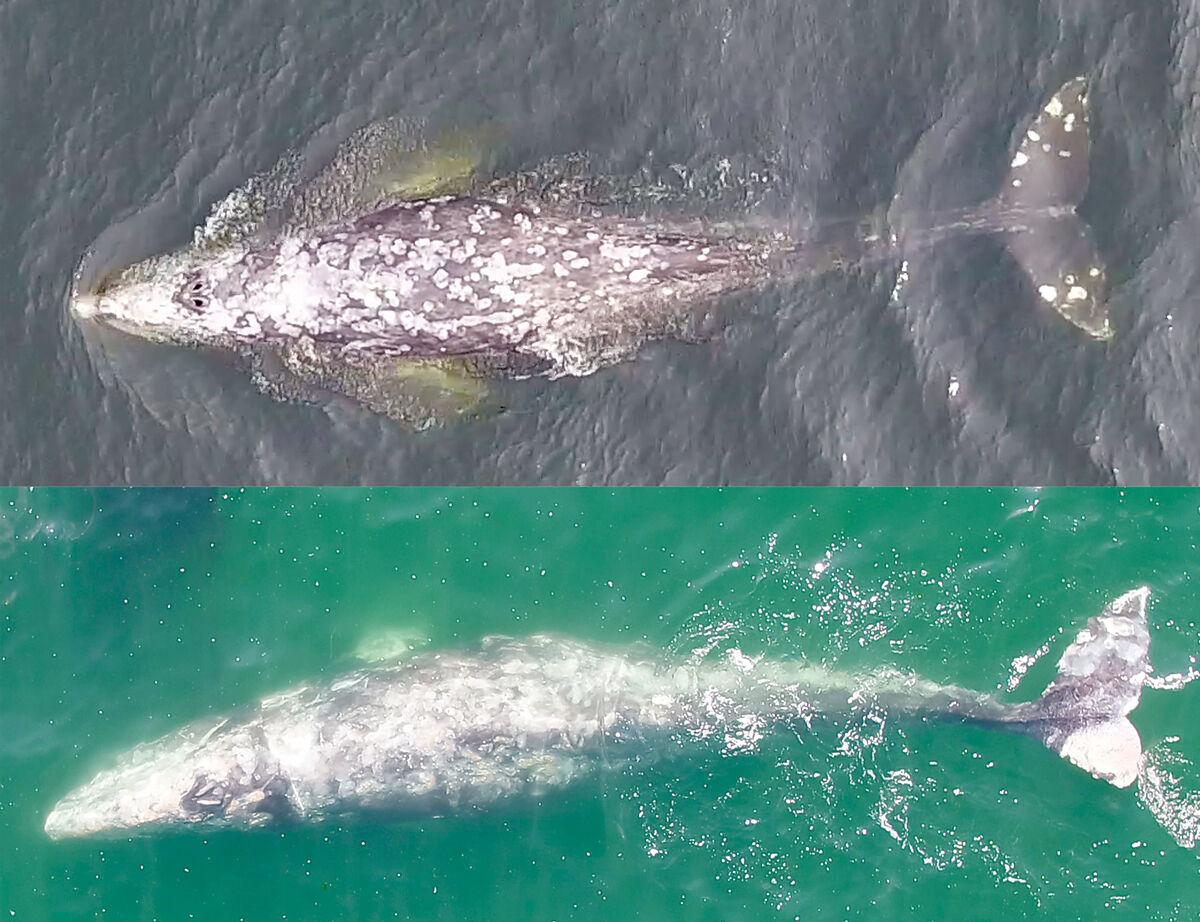 Roller Skate, an Oregon resident gray whale, was photographed prior to an entanglement with fishing line (top) and a few years later (bottom), after a portion of her fluke was effectively amputated due to the entanglement.

This image shows a propeller scar on Equal, an Oregon resident gray whale.

Roller Skate, an Oregon resident gray whale, was photographed prior to an entanglement with fishing line (top) and a few years later (bottom), after a portion of her fluke was effectively amputated due to the entanglement.

NEWPORT — Scarlett is known for the large scar on her back. Equal bears the mark of a boat propeller injury. Roller Skate’s fluke was damaged due to entanglement with fishing gear. Solé has a favorite foraging ground she returns to each year.

Each of these gray whales was nicknamed by researchers in the Geospatial Ecology of Marine Megafauna Laboratory at Oregon State University’s Marine Mammal Institute. Over years of study, the researchers have learned the identifying marks, behaviors and health conditions of whales such as Scarlett, Equal, Roller Skate and Solé that frequent the Oregon coast.

Now they want the public to get to know some of these whales, too. They developed a website — https://www.individuwhale.com — where visitors can meet some of these iconic whales; learn about their major life events; see their identifying marks; learn about the stresses they face from human activity and how to reduce them; and find out more about the research that seeks to better understand the animals.

“We wanted to share with Oregonians, and the public in general, the stories of these whales because they are residents of Oregon like us, and they have personalities and stories to tell,” said Leigh Torres, principal investigator of the Geospatial Ecology of Marine Megafauna Laboratory at OSU’s Marine Mammal Institute. “These whales have interesting lives that we’ve learned a lot about over the years through our research.”

Most gray whales in the Eastern North Pacific population cruise along Oregon’s coast as they migrate south in December and January to breeding grounds in Mexico and back north in March to feeding grounds in the Bering and Chukchi seas between Alaska and Russia, where they spend the summer.

Torres and her team study a distinct population of gray whales known as the Pacific Coast Feeding Group, which spends the summer months feeding in coastal waters of Oregon, as well as northern California, Washington and southern Canada.

Torres and her research team have been observing and conducting annual “health check ups” on this population since 2016. When they spot a defecating whale from a boat or via a drone, they follow in the animal’s wake and use nets to capture samples that can be used to monitor reproduction and stress. The drones are also used to capture images of the whales, allowing researchers to monitor the animals’ body condition and behavior.

“It’s a unique study system that allows us to do some really cool science,” said Torres, an associate professor in the College of Agricultural Sciences’ Department of Fisheries, Wildlife, and Conservation Sciences. “We can track a lot about the whales’ lives. We know their age and sex, their body condition and we can also track some of their different experiences, such as injuries or reproduction.”

Torres and her team have catalogued about 190 whales, each with its own name and identification number, in the Pacific Coast Feeding Group. Some whales have become so well known, the researchers — and in some cases, the public — recognize them instantly.

Right now, eight of the well-known whales are featured on IndividuWhale. Scarlett, also sometimes known as Scarback, who is frequently seen in the Depoe Bay and Newport areas, is one of the featured whales.

“We’ve seen her every year that we’ve gone out on the water,” said Lisa Hildebrand, a doctoral student in Torres’ lab who helped create the new website. “She’s a resilient whale who recovered from this huge wound on her back and then was able to successfully reproduce.”

Another whale, Roller Skate, was first identified as a calf in 2015. In 2019, she was spotted with fishing line entangled around her fluke. In 2020, the researchers documented her again in the same area.

“She survived a very gnarly, embedded wound, and part of her fluke was effectively amputated,” Hildebrand said. “She dives differently now than she did before the injury.”

Torres said one aim of the website is to educate the public about the threats facing Oregon’ gray whales, including human-caused noise, propeller injuries and entanglement in fishing gear. Gray whales also face changes in prey availability due to changing ocean conditions that affect the health of kelp forests the whales depend on for food.

“We want people to understand the connection between their behavior and these individual whales,” she said. “We’re trying to reach those everyday ocean users. If everyone changes one behavior, like slowing down while boating near the reefs where gray whales feed, reducing use of plastics that pollute the ocean and removing recreational crabbing gear promptly so animals don’t get tangled in it, these are all things that can make a huge difference.”

The IndividuWhale project was funded in part by Oregon Sea Grant and the Marine Mammal Institute. Erik Urdahl, a website developer, donated his services to build the site.