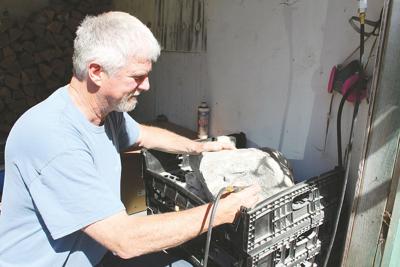 Hundreds of fossils fill a shed outside the Newport home of Kent Gibson. Gibson has been collecting fossils for more than 20 years and has several on display in the Smithsonian Institution.

John Lennon had Yoko, Johnny Cash had June, and Kent Gibson had Bart.

Bart, a black Labrador retriever, may not have exactly been a poetic muse, but Gibson said his faithful companion led him to a passion and hobby that has lasted more than two decades and taken him to places he never imagined.

“I was on Ona Beach in 1998, and I remember it was a very stormy year,” recalled Gibson. “I was out collecting agates and jasper from the beach with my dog, Bart, when I found a rock about the size of a baseball.”

Gibson put the seemingly ordinary rock in his bucket, and Bart took it out. “I tossed it, and the dog brought it back. We did that twice. Then Bart dropped it on my foot.”

It was then that Gibson took a closer look and noticed that “rock” wasn’t just any rock. It was a fossilized prehistoric porpoise skull — the first fossil Gibson found — and one of his discoveries that is currently on permanent loan to the Smithsonian Institution.

Carbon dating placed it around 16.4 million years old by paleontologists.

Since that fateful day, Gibson has collected thousands, perhaps even hundreds of thousands of fossils on the beaches in Lincoln County.

“I’ve found over 650 already this year,” said Gibson. “I would say I have collected more beach fossils than anyone in Oregon. And piece for piece, probably more than anyone, anywhere.”

The road to the Smithsonian

Gibson’s road to the Smithsonian began about nine years ago after a chance meeting with a couple other fossil enthusiasts.

Gibson had heard about two men who were going to give a presentation about fossils in Lincoln City. He loaded several fossils in the back of his truck and headed north.

Those two guys were artist Ray Troll and Dr. Kirk Johnson, who now is the director of the Smithsonian National Museum of Natural History. The pair were on a publicity tour for their book called “Cruisin’ the Fossil Freeway,” a retelling of their 5,000-mile road trip in search of fossils.

“I had about a dozen skulls in my truck and got there about an hour early,” recalled Gibson. “I noticed these two nerdy guys walking across the parking lot, and I asked if they were looking for the fossil guys too.”

Troll turned to Gibson and informed him that they were the two presenters of the fossil talk.

“I asked if they wanted to see my fossils, and they kind of blew me off. I went in and watched a 250-piece slide show that took about two and a half hours.”

Gibson said he started to realize that Troll was a famous artist. “There were about 30 guys standing around after the presentation wanting to talk more with Ray. So I just waited and waited.”

Finally, everyone cleared out and Gibson had his time to talk to Troll and Johnson.

“I said, ‘You guys still wanna look at my fossils?’”

The three men went back to Gibson’s truck.

“I heard Kirk say, ‘Oh my God! Ray! Ray! Come look at this!’ They couldn’t believe what I had in there.”

Thoroughly impressed by Gibson’s collection, Troll and Johnson invited him to lunch with some of the people from the North American Research Group, a society of amateur fossil hunters. That encounter led to a meeting with people from the Smithsonian.

Eventually, curators at the Smithsonian chose several of Gibson’s fossils for display. As a thank-you for his donation, he was invited to Washington, D.C. to talk with scientists and get some VIP treatment.

Some of the scientists asked Gibson to take them out fossil hunting.

“We were just walking around the Potomac River, and I looked down and saw what looked like glass. I went and picked it up and saw it was a perfect megalodon tooth.”

“I can’t always tell what is in the rock, but I can imagine what might be in them. You have to start uncovering the bone to see what is there. It is like uncovering a mystery.”

Gibson estimates 99 percent of his vast fossil collection was found along the coast in Lincoln County.

Most of the fossils in Lincoln County are from the Astoria geologic formation dating back to the Neogene period about 15 to 21 million years ago. The formation is about 190 meters thick.

While Gibson is arguably the most avid fossil collector in this area, he wasn’t the first.

Doug Emlong was an amateur fossil collector from Lincoln County who amassed a large collection and later sold them to the National Museum of Natural History in the 1970s. Museums used to pay collectors for fossils, though that practice ended several years ago.

The collection included 15 new species of marine mammals and two previously unknown families. Emlong eventually sold more than 40,000 pounds of fossils to the Smithsonian before his death in 1980.

“Emlong had secured a special history in vertebrate paleontology by collecting more marine mammal fossils of more kinds and more ages than anyone,” said Clayton Ray, then research curator of the National Museum of Natural History, soon after Emlong’s death.

“Doug had an irrational, uncanny feeling,” Ray said. “His success was absolutely unprecedented.”

Even now, more than 40 years after Emlong’s death, his contributions to science and his legacy remain.

“I actually met Doug once,” recalled Gibson. “We went fishing together.”

It wasn’t until much later, when Gibson read Emlong’s obituary and saw his photo, that he made the connection that the man he fished with years earlier was the legendary fossil collector.

“Doug was collecting fossils before anyone else, so he found so many great finds,” Gibson said.

Two of Gibson’s favorite discoveries are a fossilized marlin skull and a desmostylus skull. Those specimens, as well as several others, are currently on display at the Oregon Coast Aquarium exhibit, “Cruisin the Fossil Coastline,” a follow-up book and exhibition by Troll and Johnson.

“The skulls are pretty important because paleontologists use those to determine the species,” explained Gibson.

One unidentified fossil Gibson recently found is part of a large bird skull, which may be Pelagornis skull. The Pelagornis was only recently identified as a species and only one fossil of it has been found. It was a very large bird and is extinct. If positively identified, this fossil would be a major discovery.

“That one will go to someone to write a paper on and will probably end up in a museum.”

He has been known to comb the beaches several times a day — in the morning before work, on his lunch break and then again after work.

“Finding stuff that no one has found before is really interesting. It’s the hunt. It’s still the hunt,” he said. “And collecting does save them from destruction.”

Gibson has some tips for people interested in amateur geology:

• Look for a place where sand has washed off the beach and not directly in the sand.

• Look for a brown color in rocks — that’s bone.

• Don’t dig in banks unless you get a permit — it is illegal otherwise.

• Join the North American Research Group (NARG) as a member.

Because of his membership to NARG, Gibson has a permit to pick up more than the regulated one gallon per day or three gallons per year of agates, jasper, fossils. Some of his fossils are even too big to put in a bucket.

When he retires in November as commercial marina harbormaster at the Port of Newport, Gibson doesn’t have plans to slow down his hobby but hopefully will have more time for it.

Where to store them all, however, might be a problem. Already in large garden beds in front of his home, on shelves in sheds and a workroom where he painstakingly works with air scribes and a sandblaster to remove rock from some of the fossils, his fossils take up a lot of space.

And since selling fossils is illegal, there is no monetary value in his collection.

“When the aquarium show is over, I am seriously going to consider donating much of my collection. It has seriously gotten out of hand,” he said.

The exhibit, “Cruisin’ the Fossil Coastline” featuring some of Gibson’s fossils, will be on display at the Oregon Coast Aquarium until next spring.