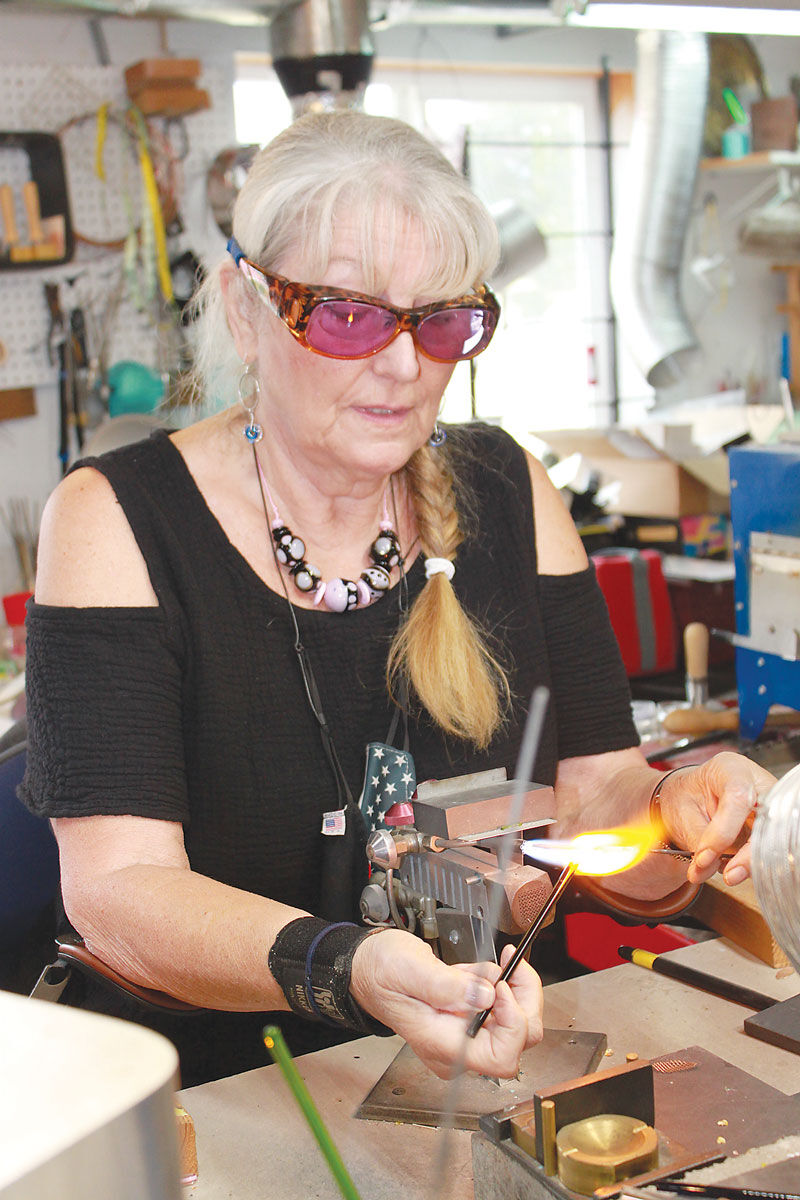 Heartsong Beads owner Susan Hanson works on a memorial bead in her Seal Rock studio. Hanson is closing her brick-and-mortar store after 21 years and moving her business online. (Photos by Susan Schuytema) 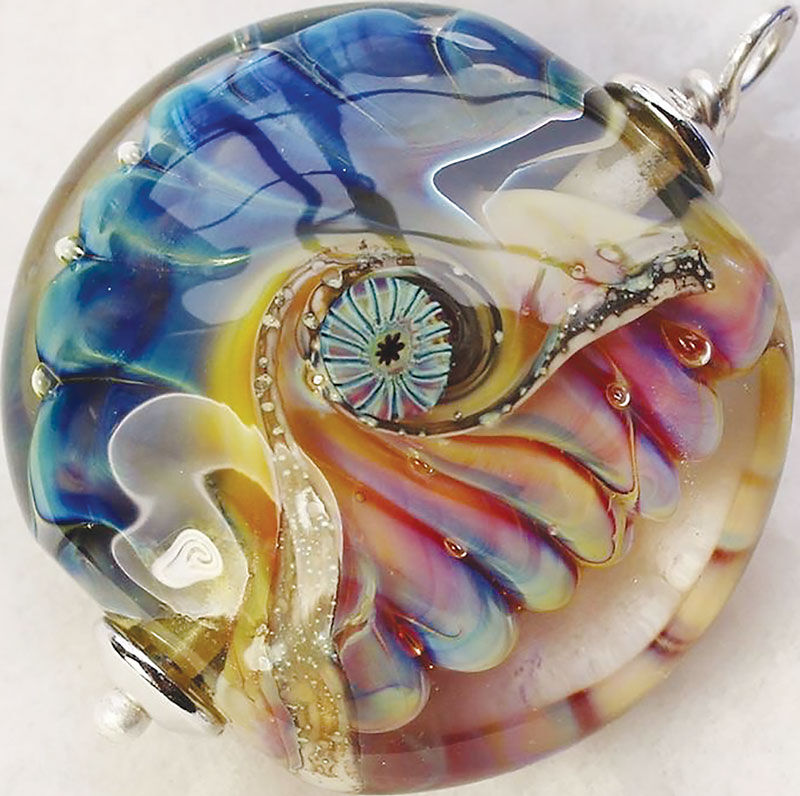 A memorial bead created by Susan Hanson, owner of Heartsong Beads in Seal Rock, contains the ashes of customer’s deceased loved one. Though her store is closing, Hanson will continue to offer memorial beads through her online store. 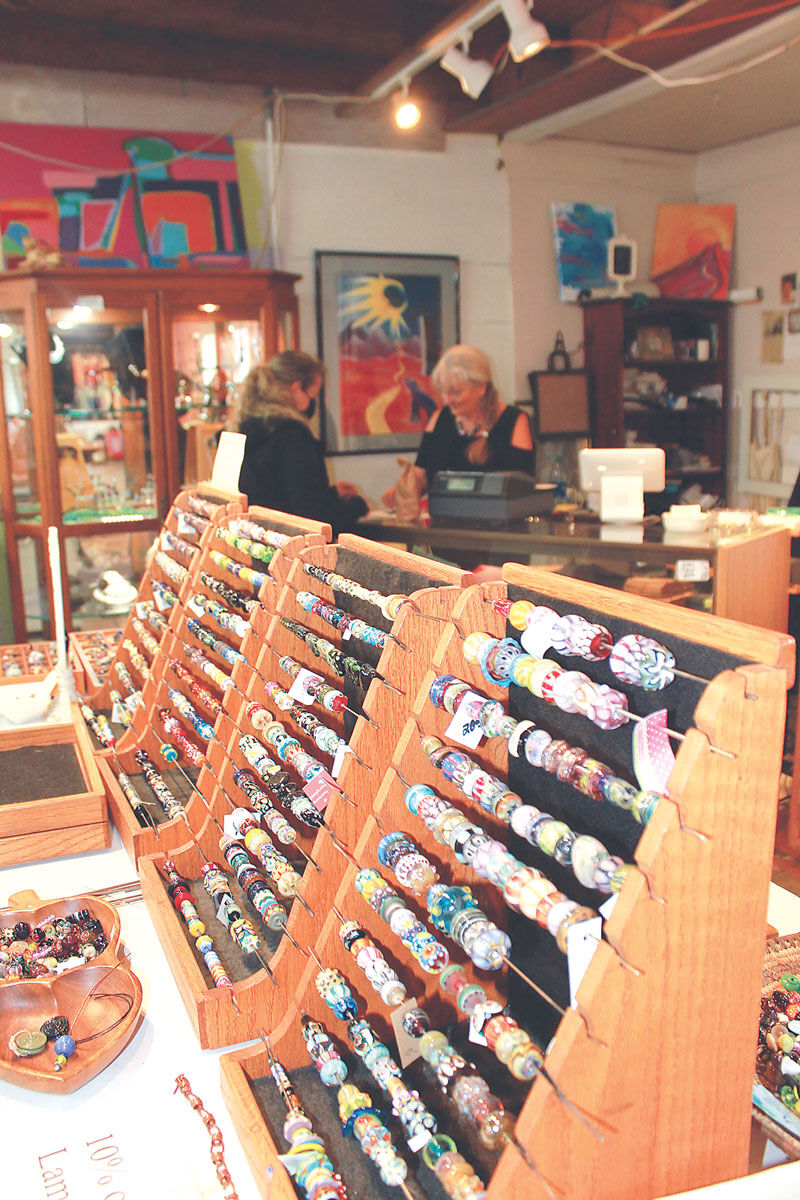 Hundreds of beads are displayed as Susan Hanson, owner of Heartsong Beads, rings up beads for customer Sara Gerhards of Eugene during her business liquidation sale. Hanson is closing her Seal Rock shop and moving her business online.

Heartsong Beads owner Susan Hanson works on a memorial bead in her Seal Rock studio. Hanson is closing her brick-and-mortar store after 21 years and moving her business online. (Photos by Susan Schuytema)

A memorial bead created by Susan Hanson, owner of Heartsong Beads in Seal Rock, contains the ashes of customer’s deceased loved one. Though her store is closing, Hanson will continue to offer memorial beads through her online store.

Hundreds of beads are displayed as Susan Hanson, owner of Heartsong Beads, rings up beads for customer Sara Gerhards of Eugene during her business liquidation sale. Hanson is closing her Seal Rock shop and moving her business online.

SEAL ROCK — A long-time business owner in Seal Rock is closing her brick-and-mortar shop, though she’s not exactly retiring.

Susan P. Hanson, owner of Heartsong Beads on Highway 101, has sold the building that has housed her business for more than 20 years, but she plans to move at least some of her work to an online store.

“Small businesses just can’t compete with Amazon, even though people aren’t happy with the stuff they buy online,” Hanson said. “It’s generic, and they can’t touch it before buying, but it’s still putting mom and pop shops out of business.”

She said around 50 people a day used to come through her business. But when her store traffic went down to one or two people a day, she could see the writing on the wall. “I have decided to slowly move the shop to an online business. This will allow the artist in me to thrive and be more creative,” she said.

Hanson is primarily a bead and lampwork artist. Lampworking is a type of glasswork in which a torch or lamp is used to melt the glass. Once in a molten state, the glass is formed by blowing and shaping with tools and hand movements.

Her path to becoming a skilled lampwork artist started years ago. Originally from Great Britain, Hanson moved to Vancouver, Canada, where she worked as a stockbroker. From there she moved to Hawaii and owned an art supply store. In 1990, it was a road trip down the Pacific Coast Highway that became a life-changing experience. “I fell in love with Yachats,” she said. “I bought three properties in one day.”

After relocating, Hanson opened a bed and breakfast in Yachats called “Ghost Manor.” A short time later she built another B & B near Ten Mile Creek, which she ran for five years.

While visiting a glass studio in Portland in 1995, she felt a connection right away to the art. “The next week I went out and bought a torch. I taught myself. I had a studio with a huge window looking out at the ocean and used to sit there for eight hours a day. It’s very meditative, and I would get lost in the flame.”

In the beginning, her lampwork was just a fun hobby. “Guests at my B & B used to fight for a bowl of beads I would put on the breakfast table. The beads were really hideous. I thought they were great at the time too. But they were terrible. Those people were so sweet.”

After Hanson sold the B & B, she felt as though she lost her identity. A friend suggested she open an art gallery, so she did. “I rented a building for $600 bucks and had no clue what I was going to put in there. So, I made beads and bought some gift inventory.”

There was a large, old building next door to her for rent that sparked her interest. “Back then the north wall was rotted out and boarded up,” she said of the building that would eventually house Heartsong Beads for 21 years. “It was an old junk store. I would look at this building and think, ‘What an ugly building, but also kind of cute.’ When it was listed for sale six months later, I bought it.

“Once I got into this building, I was doing pretty good,” she said. Hanson was making beads and jewelry initially before it morphed into a full-blown bead store. But in 2008, the housing crisis hit and the economy took a dive. “My business was going down, but I kept hanging in here. Now here we are. It’s been up and down. You don’t become an artist to become a millionaire. But I’ve been doing something that I love doing.”

Though Hanson is currently having a liquidation sale on all her inventory, it isn’t the end of her glasswork. “I could never retire. I would be bored stupid,” she said.

She plans to continue making memorial beads, which are glass pieces of art that contain ashes of someone’s deceased loved one. Just a small bit of ashes can make four or five beads, explained Hanson. The customers pick out the colors — maybe the favorite color of the loved one they have lost — and Hanson creates a one-of-a-kind wearable memorial.

“When people purchase one of my memorial beads, I ask a little about their loved one. Reading their story always brings tears to my eyes. My hope is to give them a small amount of comfort when they wear the memorial bead. I want to honor their memory and preserve their physical remains in a respectful way.”

Hanson created her first memorial bead in 2009 when a close friend’s dog passed away. “She wore the bead always, and it gave her a small amount of relief from her grief. I just did one recently for a woman out east who had kept the ashes of every pet she had ever had. She also had the ashes of her sister and parents. I made her a bracelet with 11 beads with the ashes of each one. It was quite the feat.

“With glass working, you learn to do a lot of different things,” Hanson said. “I wanted to make beautiful pieces of art that people would love and get complimented on, and that’s what I did.”

Hanson’s work is still on display and for sale in the Pacific Artists’ Co-op Gallery in Lincoln City and Earthworks in Yachats. Her plans are to continue to make beads and jewelry at least for the time being. “I am blessed to be doing what makes my heart sing,” she said.

Hanson has a website, www.heartsongbeads.com, which also features her video tutorials. “I teach people techniques through my website. We’ll see how it goes. Everything seems to be going online. If I do keep this part of the building, I might still do workshops here. I’ve been teaching for about 16 years and have taught quite a few people.”

Looking back on her choices, Hanson said embracing change has served her well. “You have to change. The hardest thing to do is change. We fight it kicking and screaming, but when we finally get through it, we realize it wasn’t so bad.”