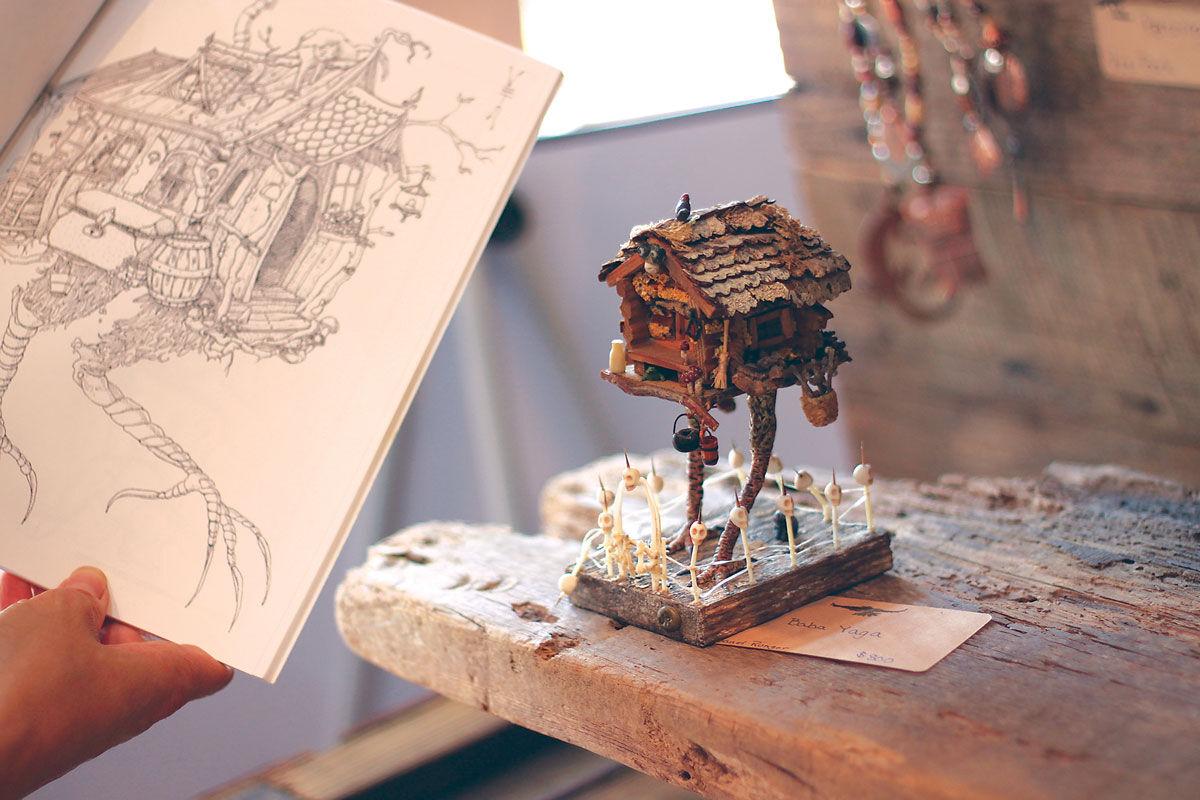 An illustration by Bakhtina, is next to a coordinating assemblage piece by Crow’s Nest Gallery owner Janet Runger. (Photo by Susan Schuytema) 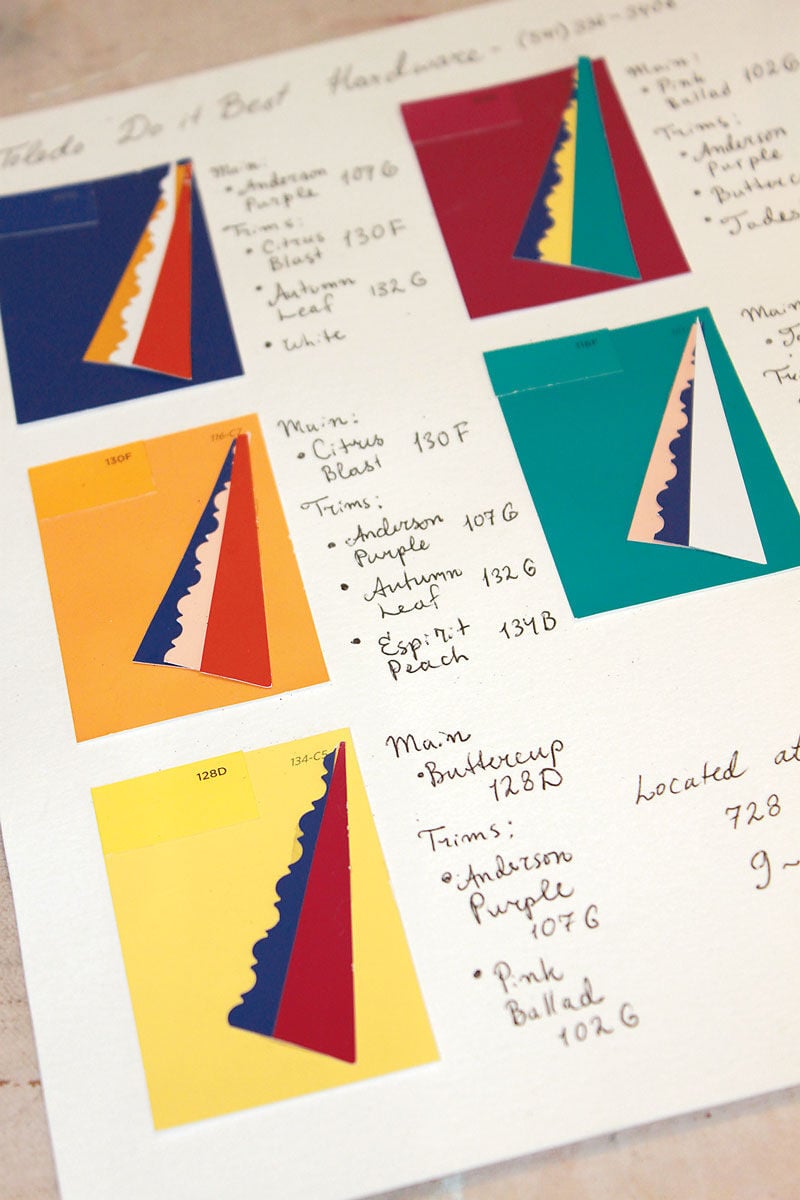 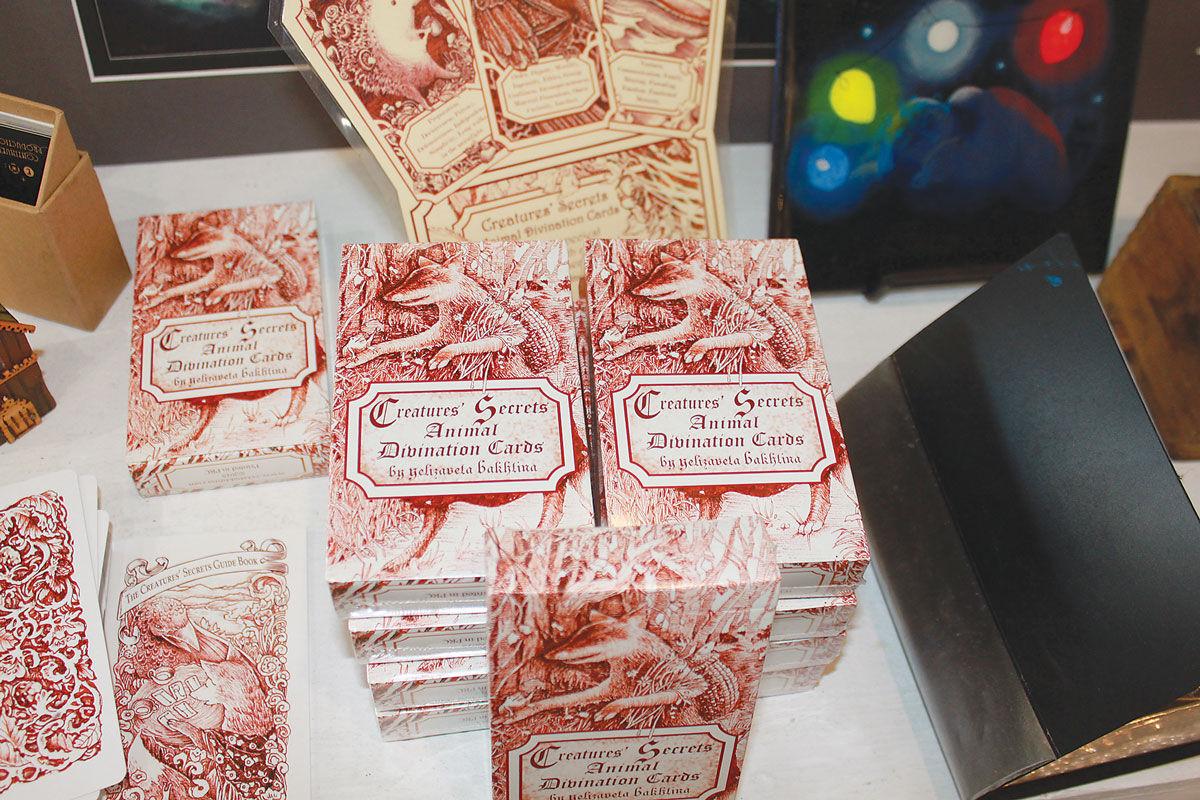 Animal Divination cards illustrated by Veta Bakhtina are for sale at The Crow’s Nest Gallery in Toledo.

Veta Bakhtina continues work on her latest oil painting at The Crow’s Nest Gallery in Toledo.

An illustration by Bakhtina, is next to a coordinating assemblage piece by Crow’s Nest Gallery owner Janet Runger. (Photo by Susan Schuytema)

Animal Divination cards illustrated by Veta Bakhtina are for sale at The Crow’s Nest Gallery in Toledo.

TOLEDO — Veta Bakhtina has travelled around the world and painted murals in many major cities, including Amsterdam, Rome, Budapest and in every place that she has lived. Now, she is ready to make her impact in Lincoln County.

Last fall, Bakhtina settled in the little town of Toledo, where she is a resident artist at The Crow’s Nest Gallery, owned by Janet Runger. While some people may wonder how such a world traveler ended up in the rural town of Toledo, she had always dreamed of moving to the Oregon coast but didn’t think it would be possible.

“It seemed strangely unattainable to move to the coast,” Bakhtina said. “I’m not sure why it seemed unreasonable.” But the coast came calling in the form of an old friend.

Bakhtina was friends with Runger’s son when they all lived in Colorado in the late ’90s, and they all have remained friends ever since. Runger had recently moved her gallery to a larger building in downtown Toledo and invited Bakhtina to join. She jumped at the chance.

“We’ve been told we are a good pair,” Bakhtina said of Runger. “We have a good connection, and we get inspiration from each other. There are a million benefits in working there.”

Besides her work as a muralist, Bakhtina is a surrealist painter and children’s book illustrator.

At first glance, Bakhtina’s paintings are dark, mysterious and dramatic. But a closer look reveals colorful details that are joyful and whimsical. Creating art has always been in her blood.

Originally from St. Petersburg, Russia, Bakhtina said her initial love for art came from reading a lot of children’s books. “I grew up in a literary family. My mother’s father was a writer and publisher of books,” she said.

Her parents had friends who were interpreters and brought her children’s books from all over the world. “In Russia during that time — the ’80s — we didn’t have a lot of TV. I spent a lot of time reading, so my passion for illustration came from being exposed to so much creativity.”

No one else in her family pursued art. Her mother is a doctor, and most of the other women in her family went into medicine. She felt a similar draw toward helping people.

“I wanted to go into a humanitarian career — whether it was medicine or activism. I always had the need to help the woes of the world. I struggled for a really long time because I struggled to do something else,” she said.

But Bakhtina was also inclined toward art. “In school, all the kids asked me to do illustrations for their projects,” she said. “I was always the artistic, creative one. In Russia there was a lot of art taught in school, and I did a lot of art at home.”

In the early ’90s, her family emigrated to the U.S. and settled in the Denver area. That experience of leaving her homeland at a young age and her being an emigrant is what continues to drive her work.

“There are things that for me, as an emigrant of the United States, have influenced my work in a very real way. That longing and nostalgia for our homelands can be crippling at times for emigrants. I paint what I need to paint.” Nearly all her paintings include elements of the landscape of her youth.

“The closest link for me is the astounding visceral sensation of being in a place you love. Place, for me, has always been an important concept,” she explained.

She calls herself a landscape painter even though her work is also filled with characters. Bakhtina pointed to a painting titled “Morning Crow” as an example. In that piece, she wanted to paint a rooster that also had a decorative motif on it. “I had no idea when I started that the landscape would actually be a heart portal. And I also had no idea I would place him in this solitary environment. It all came out through the process of painting, which is essentially adding and removing content.”

Bakhtina uses mostly oil paints in a glazing technique because it has the truest-to-life color. Glazing is a traditional process where thin layers of translucent paint are applied on top of the main color to create depth. “Light is really important in my pieces because they are dark, and the light really shines through. I don’t paint on top of a black background. I paint on the white and paint in layers. It gives it a really vibrant aspect that appears like it is on fire in places.”

She published a coloring book in 2010, and her children’s book, “The Magic Traveling Bunk Bed and the Key to Moon City,” came out in 2019. “The book started first with illustrations to recreate feelings I cherished as a child,” she said. “The story took over and took on a life of its own. I wrote it for myself but also for 6 and 7 year olds.”

Thousands of packs of her detailed animal divination cards have been sold to customers all over the world. Now in its second printing, this spirit guide card deck displays 56 creatures from the animal kingdom. She had been working with scientific illustrations so included taxonomy in her illustrations. “I gathered information for the cards by studying behavior in the wild and spiritual painting. It was important to me to have both.” Though adept at scientific illustration, she never considered it as a career because it is too dry for her taste. This is her way of putting a bit more whimsy in it while keeping it accurate.

Her love of animals and nature is not only reflected in her artwork but also in her side projects. She is involved in plant care and pollinator support and sells bee friendly, pollinator yard signs that promote food security on her website and in The Crow’s Nest Gallery.

Bakhtina is also making an impact in Toledo’s city beautification project. She is planning a mural in downtown Toledo and curated the color swatches for a downtown building palette in dramatic colors. “People are on board with adding a lot to Toledo in terms of whimsy and bringing people in. It’s really exciting and speaks to what Toledo already has going on, which is incredible. It been great seeing how the town transforms. I moved to Toledo at this very interesting time.”

Bakhtina’s work can be viewed on her website at vetabakhtina.com and at The Crow’s Nest Gallery on Main Street in Toledo.