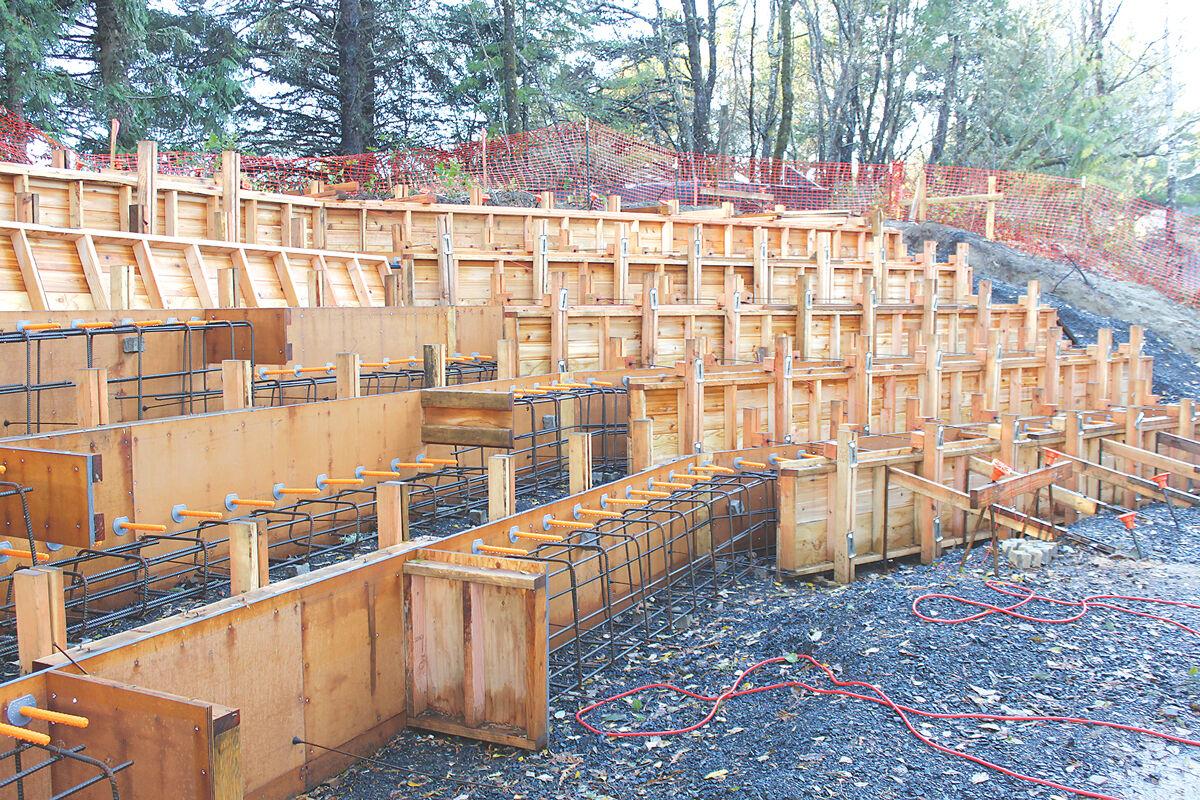 Construction is in progress on a new outdoor amphitheater at the Oregon Coast Aquarium. The amphitheater will provide large group seating for animal presentations and other educational programs. (Photo by Susan Schuytema) 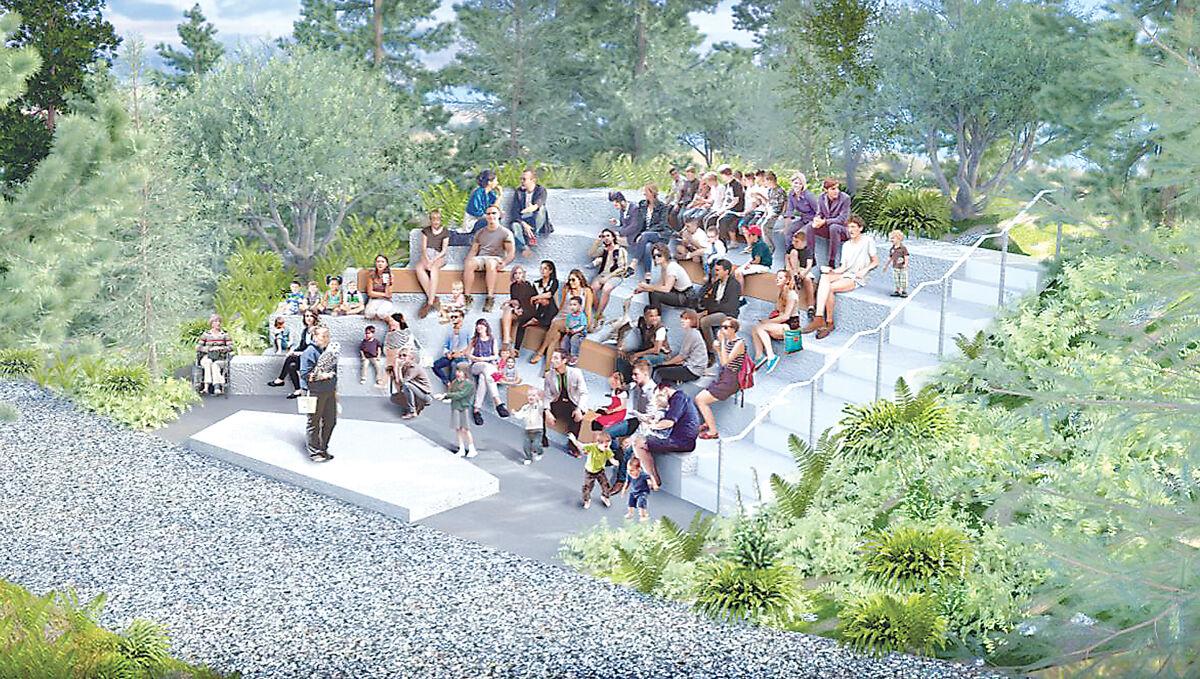 An architect’s rendering shows the completed amphitheater at the Oregon Coast Aquarium. The phase one construction projects are scheduled to be completed in the spring of 2022.

The Great Hall at the Oregon Coast Aquarium is shown in an architect’s rendering. The remodeled space will feature a jellyfish exhibit and a larger, open space to improve traffic flow of visitors.

Construction is in progress on a new outdoor amphitheater at the Oregon Coast Aquarium. The amphitheater will provide large group seating for animal presentations and other educational programs. (Photo by Susan Schuytema)

An architect’s rendering shows the completed amphitheater at the Oregon Coast Aquarium. The phase one construction projects are scheduled to be completed in the spring of 2022.

NEWPORT — Construction is in full swing on the ambitious new features at the Oregon Coast Aquarium, but it is business as usual for the staff and non-human residents.

Even though fences are up and large construction equipment is on site, only one exhibit is temporarily closed. “Every time we have fences up, people assume many exhibits are closed,” Courtney Klug, communications and marketing specialist at the aquarium, said. “But that’s not the reality. Only the turkey vultures were removed from their exhibit because of the construction noise. We wanted to make sure they were comfortable.”

This remodeling project is the first phase of the aquarium’s multi-phase Capital Campaign for improvement. It is aimed at bringing people closer to nature by expanding the outdoor areas and highlighting Oregon’s history.

The existing aquarium lobby will be transformed into a Great Hall, which will include a cylindrical moon jelly exhibit, an updated café, and large doors where the bay windows were previously, which will give people a view of the headwaters and the outdoor areas. “The goal is to create an open space that is very welcoming, and people are drawn into,” Klug said.

The expanded lobby space will provide a better traffic flow for visitors. “Oftentimes when people came through the entrance, there was some confusion on where they should go. This will give them a natural path to go on, opening into the beautiful, natural part of the aquarium — the estuary — and then leading them into the main exhibits.”

The headwaters feature will include a recirculating stream, representing the relationship between watersheds and the ocean. This feature will highlight waterways, the species they support, and the role they play in sustaining Oregon’s coastal communities.

The children's nature play area is also getting a major facelift that will highlight the connection between Oregon's nature and the timber industry. The former play area was quite small with just one slide and a couple of logs. The new play area will feature massive logs, a climbing tower, and a slide that acts as a mock river chute, allowing children to connect kinetically with nature.  Klug said the updated nature play area will be an incredible addition. “Kids want to climb on rocks, and they want to be engaged. They will have an outlet for that here.”

Expanded seating along the fence will provide amazing views of the estuary and an incredible amount of wildlife, especially at high tide. “I’ve seen pelicans, herons, ospreys and gulls," Klug said. "We’ve even had elk back here before. It’s a great way for people to connect with Oregon's nature. You have the animals that are in our collection juxtaposed with the animals that are out here in their natural environment. People can easily apply what they’ve learned at the aquarium to what they are seeing here — especially because it is affected by the tides.”

A larger, practical outdoor amphitheater will be a dedicated space for educational programs and ambassador animal presentations. The previous area had limited seating and was located through a main thoroughfare so visitors would walk in front of the educator, which was often distracting. The new amphitheater will feature expansive, staggered seating to accommodate large groups, ensuring all visitors have the opportunity to engage with Oregon-native species, animal caretakers, and educators.

Klug said a popular presentation in the past was an aviculturist who brought Sanibel, a brown pelican who was injured when she became tangled in a fishing line. “The wire cut her foot, and she cannot walk properly,” Klug said. “She would not have been able to survive in the wild.” Sanibel has been trained to be around people to educate them about pelicans and plastic entanglement. “I feel people really connect to these animal ambassadors because it is wildlife up close. It is learning in a whole different sense than what we are used to. It isn’t reading about them from a book. It is up close, and it's a great way to foster a connection with wildlife.”

The Capital Campaign was announced in 2019, but plans were delayed due to the COVID pandemic after the cost of lumber shot up and contractors were unavailable. But with the funds that were contributed to the aquarium, they’ve been able to move forward with this phase one plan. “We’ve received an incredible amount of contributions from individuals, state appropriations, foundations, and donors. And it's been vital to this work,” Klug said.

Phase two projects include expanding and revamping three indoor exhibits, including the addition of a larger and more accessible touch pool and enhancement of educational programming. As part of phase three, the aquarium will build a state-of-the-art, behind-the-scenes veterinary facility for marine wildlife rehabilitation and resident animal medical care.

Klug said the aquarium is poised to enter next year’s tourist season strong. “We are calling it a miraculous recovery. Members numbers are up to pre-COVID numbers. We are still feeling the effects from the pandemic, but we are back on track. And people continue to support us. It’s been incredible the community support. These are very exciting things that are happening.”

Carrie Lewis, president and CEO of the aquarium, said these improvements will be a great enhancement to the visitor experience. “These long-held dreams are finally coming to fruition, and we couldn’t be more thrilled,” Lewis said. “These improvements will allow us to connect guests with the Oregon coast like never before, and this is just the beginning.”