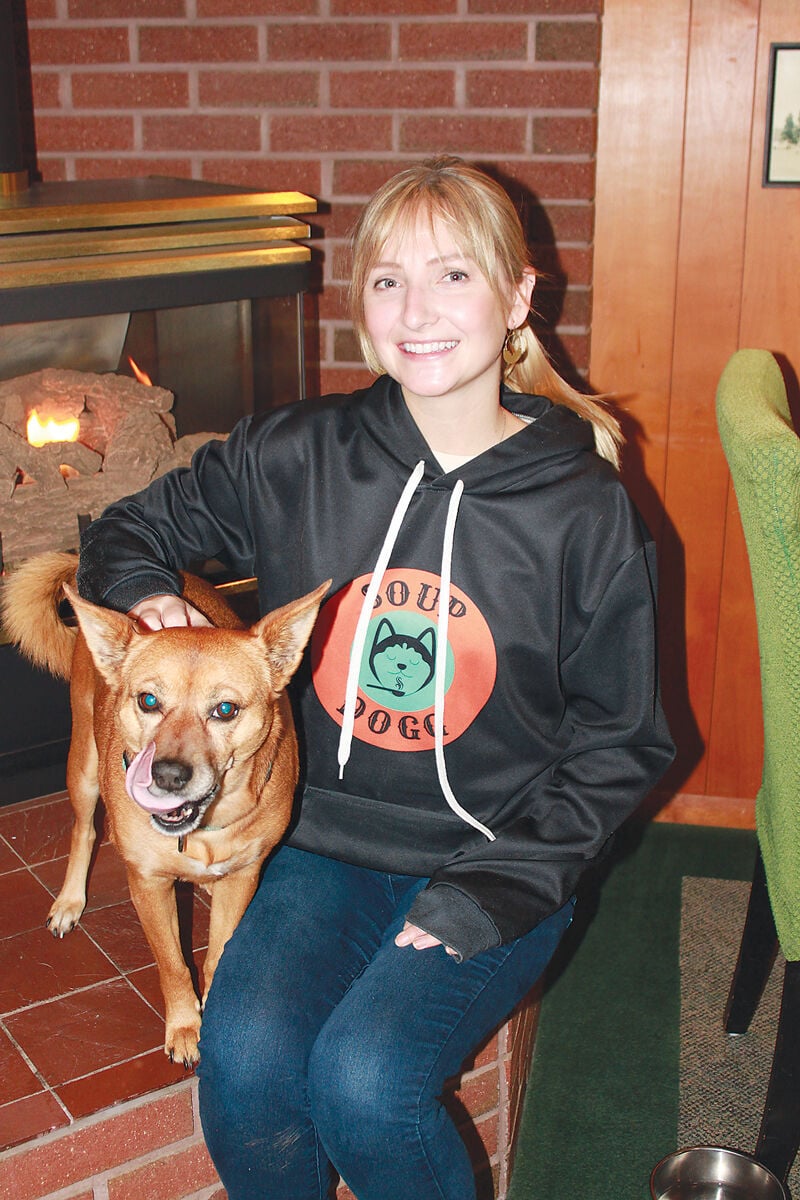 Mackenzie Martin sits next to her dog, Ru, official mascot of Soup Dogg, her homemade soup delivery business in Newport. Based out of the kitchen at the Agate Beach Golf Course. (Photos by Susan Schuytema) 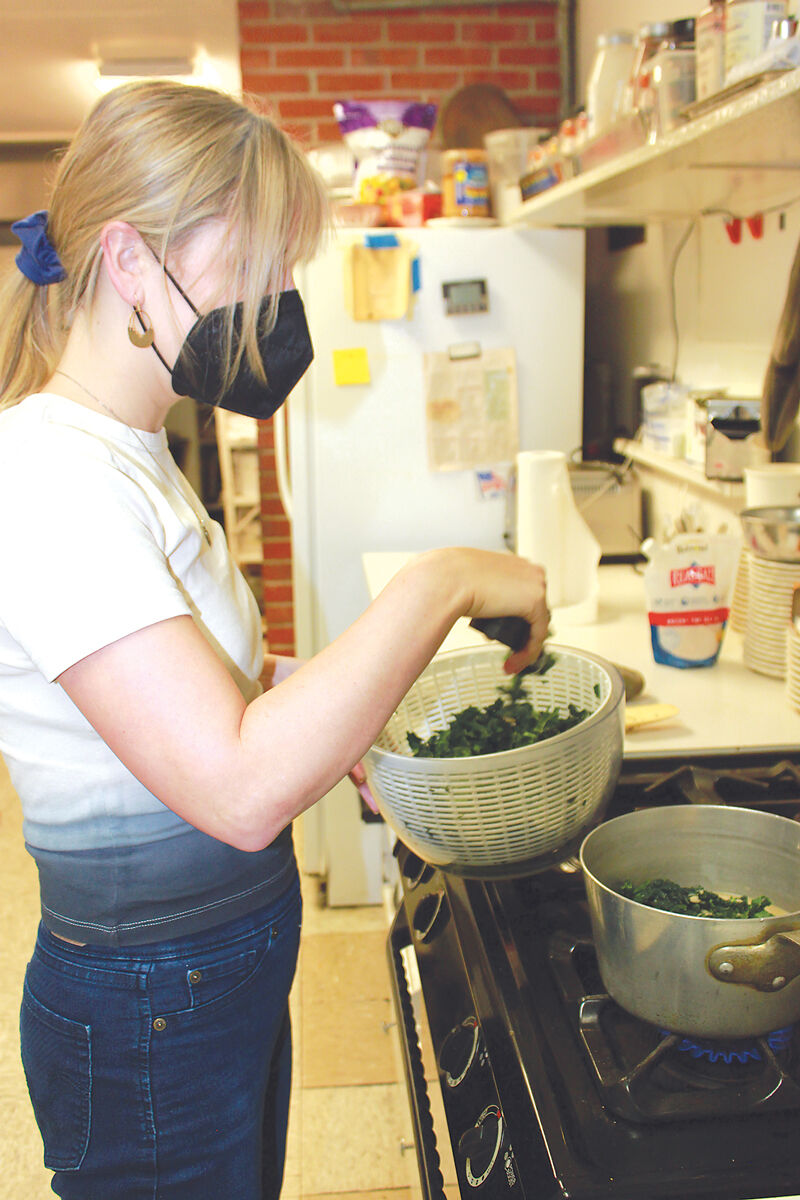 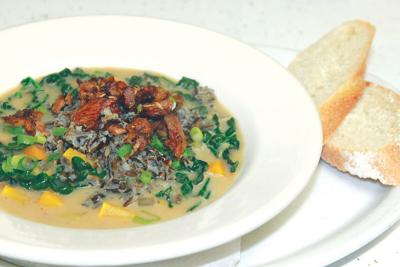 Mackenzie Martin sits next to her dog, Ru, official mascot of Soup Dogg, her homemade soup delivery business in Newport. Based out of the kitchen at the Agate Beach Golf Course. (Photos by Susan Schuytema)

NEWPORT — What started as an entrepreneurial experiment at the beginning of the pandemic has evolved into a niche business for a Newport woman.

Mackenzie Martin said a passion for cooking and a love of her faithful companion came together when she started Soup Dogg, a made from scratch, ready-to-heat soup delivery service in Newport. “It really was a combination of my two loves — soup and my dog,” said Martin. Her dog Ru is the “face” of the business in both the logo and as Martin’s constant companion.

Of course, Soup Dogg is also a pun on celebrity Snoop Dogg. “Shout out to Snoop,” joked Martin. “Though he’s really taken a culinary interest in a partnership with Martha Stewart.”

Martin’s road to becoming a business owner and “soupstress” wasn’t a straight path. As a youth, she spent her summers working at her family’s Agate Beach Golf Course. After high school, she received her bachelor’s degree in sociology from the University of Hawaii before moving to Seattle to earn her master’s degree in nutrition and dietetics from Bastyr University. After moving back to the area, Martin worked at Neighbors for Kids in Depoe Bay, feeding up to 100 kids three meals a day. “It was a big undertaking,” said Martin. When her job ended due to the pandemic, her career came full circle when she went back to work running the golf course cafe.

“The golf course stayed open during the pandemic because people were able to social distance,” she explained. After the cafe closed for the season in November 2020, Martin started thinking about what she could do and what the community would support. She saw delivery service was a real need in this community. “I wanted to be able to reach out to those people,” she said. “And my brother calls me ‘Soupy’ because everywhere I go, I order soup. It was kind of a joke.  But then I started thinking, ‘What if I just made soup for people?’ There have been so many times when I wish I could just drive up somewhere and have a bowl of soup. There wasn’t a place to go for that.” All those factors came into one, and Soup Dogg was born.

A healthy diet is very important to Martin. “Bastyr University’s dietetics program focuses on whole foods nutrition and relying less on processed foods. I am very much focused on buying local and organic foods. Using all that knowledge, that is how I cook at home, and I wanted to offer that to people.”

Martin said her soups are about connecting with the season and homing in on the nutrition component. “My diet is liberal — I can eat dairy and gluten without problems. However, I know that many soups are dairy based and use a flour roux, and I know many people who can’t eat those soups. So, I make all my soups dairy free and mostly gluten free.” Martin occasionally will make homemade noodles and always indicates allergen information. “If anyone has dietary restrictions, I can work around that. I like to work with people and really get to know them.”

Most of her soups are plant-based, but not all are vegetarian. When a soup calls for meat, such as the recent gumbo, she buys it from Oregon Valley Farms out of Albany where the animals are pasture raised. Martin said that increases the quality of the meat.

Though she gets inspiration from others, Martin’s recipes are uniquely her own. “I like doing big flavors and seasonings, but I never follow a recipe.” She said her soups are ingredient-driven by what is fresh, local and in season. “What I love is just seeing what is available in the stores or farmers markets. It’s the beauty of not having a menu. It brings you closer to time and place, which I think is important.” Some recent soups include chicken tortilla soup, roasted tomato orange basil soup, Dungeness crab soup with shrimp and asparagus, and Rojo pozole.

Soup Dogg isn’t a typical restaurant where diners walk in and order. Though she can sometimes meet people at the golf course for takeout, it is primarily a soup delivery service, where only one soup is offered at a time. “Typically, I make two to three soups a week and have been making about 16 quarts at a time.” Martin sells them in pint and quart size, usually for $10 and $20 though certain soups, such as Dungeness crab soup, can cost more.

Each new soup is posted on Facebook, Instagram and emailed to people who’ve asked to be on the email list. Anyone interested in having soup delivered should text her. She will deliver to Newport and can deliver to Depoe Bay and Toledo for an extra charge. “It’s been an experiment and right now, it’s very flexible.” Martin said sometimes, the soup sells out fast. “I posted a red curry pumpkin bisque on late Saturday night, and it was sold out by early Sunday morning.”

Martin also uses a vacuum sealer and freezes soups flat so people can order ahead and stock up if they desire. “People are grateful to not have to go out in bad weather and have fresh soup delivered right to their door.”

Soup Dogg is a one-woman show for now, but Martin is prepared to grow her business. She is looking into partnering with some other local businesses and hopes to have a food cart eventually to serve soup at events to provide the chilled soup option and hot soup.

Right now, she makes her soup in the golf course kitchen which, she admits, may cause some confusion since technically, it isn’t part of the golf course. And that is not the only point of confusion. “There has also been some confusion that I make soup for dogs,” said Martin. “That cracked me up. I love my dog, but I am not that pretentious.”