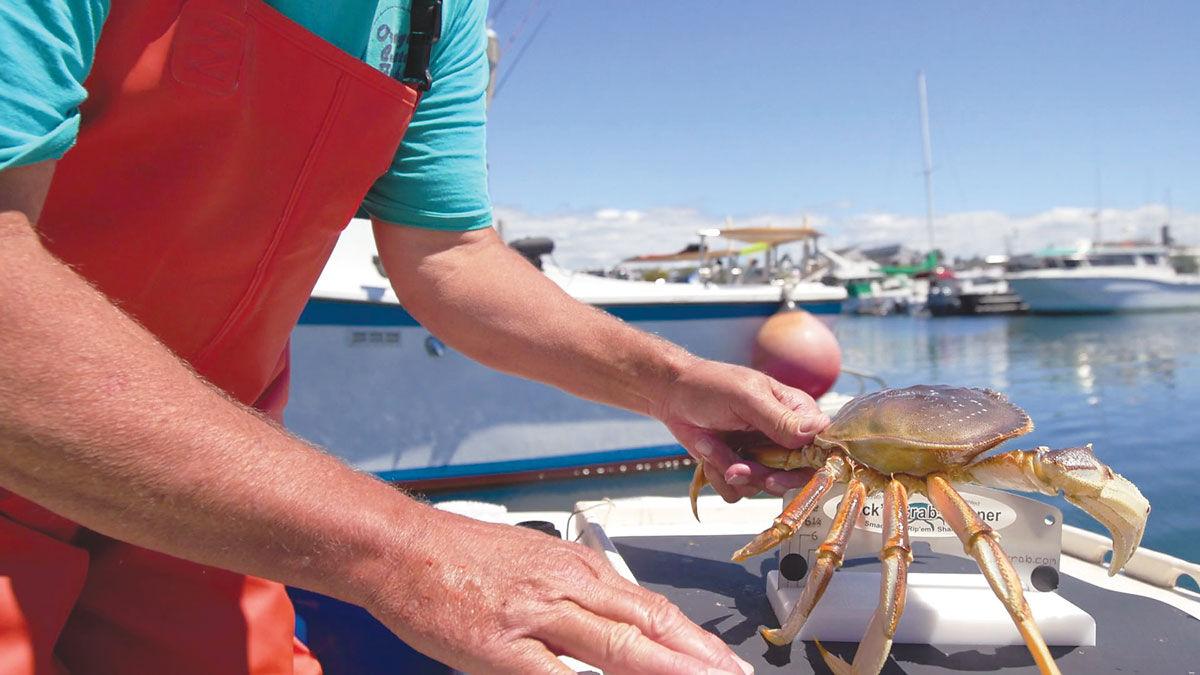 A fresh caught Dungeness crab, is prepped for a quick and easy cleaning. Oregon fishermen Tony Thiessen and Eugene Calkins invented a tool called Crack’n Crab, which allows users to cut the crab in two pieces while leaving the guts in the top shell. (Photos by Casey Felton). 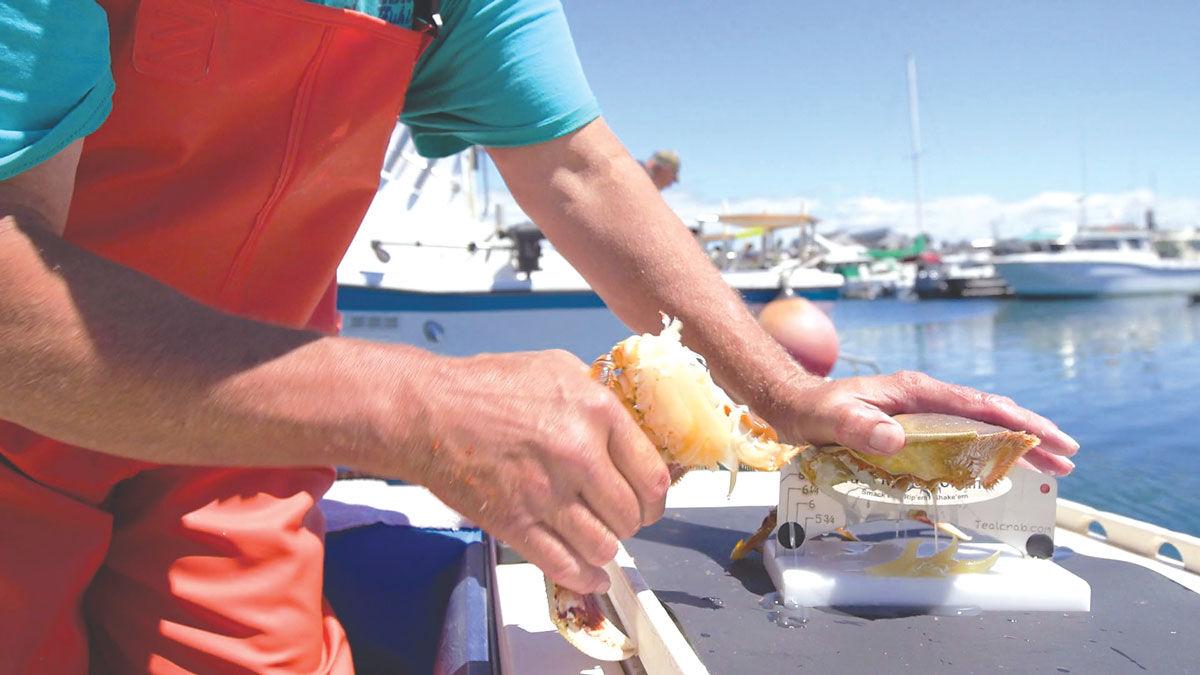 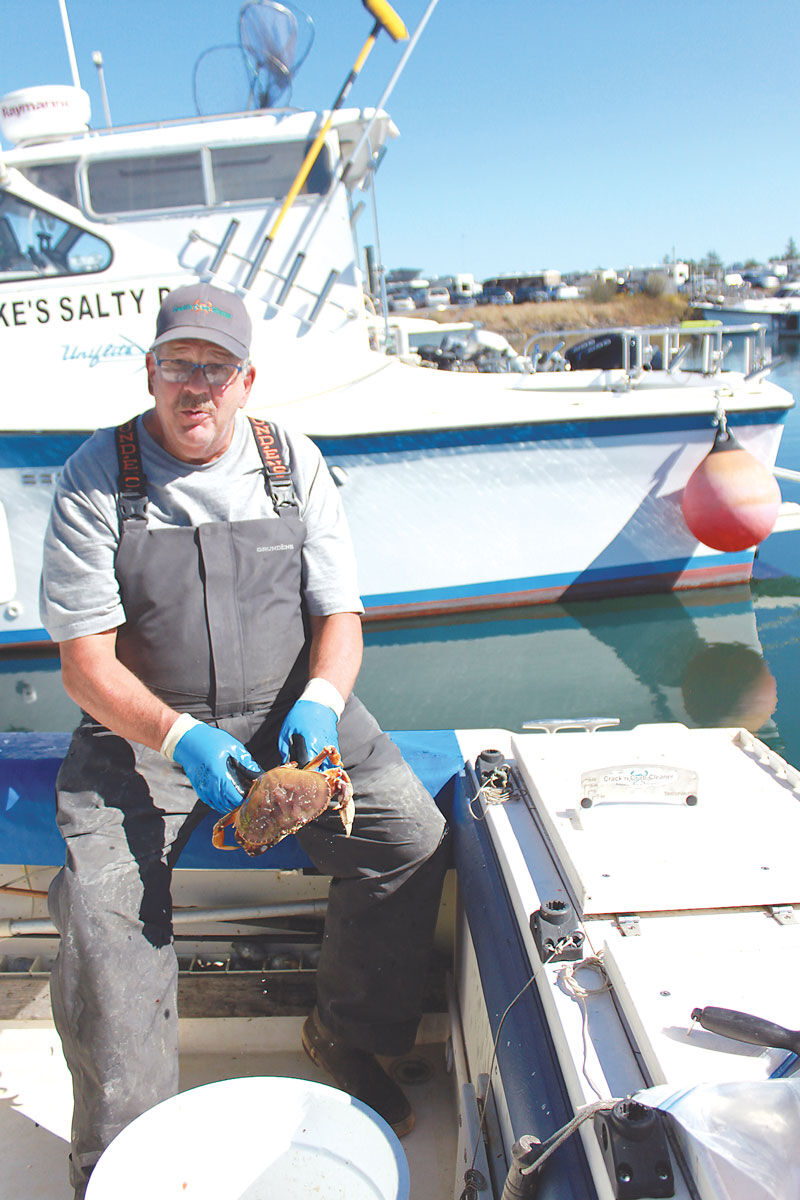 Thiessen prepares to clean a crab on a Crack’n Crab device. A Dungeness crab can be cleaned in about 40 seconds with the innovative tool. (Photo by Susan Schuytema)

A fresh caught Dungeness crab, is prepped for a quick and easy cleaning. Oregon fishermen Tony Thiessen and Eugene Calkins invented a tool called Crack’n Crab, which allows users to cut the crab in two pieces while leaving the guts in the top shell. (Photos by Casey Felton).

Thiessen prepares to clean a crab on a Crack’n Crab device. A Dungeness crab can be cleaned in about 40 seconds with the innovative tool. (Photo by Susan Schuytema)

The proverb “Necessity is the mother of invention” and the saying “Happy wife, happy life” encapsulate what led two friends to invent a product that not only led to happy wives, but thousands of happy customers.

Eugene Calkins and Tony Thiessen are the inventors of Crack’n Crab, a product that makes cleaning Dungeness crab quick and easy.

“There are a lot of ways to clean a live crab, but the crab doesn’t like any of them,” joked Thiessen.

Those biotoxins were domoic acid — a neurotoxin that causes shellfish poisoning. Domoic acid is produced by algae and accumulates in shellfish, sardines and anchovies. When sea lions, otters, cetaceans, humans and other predators eat contaminated animals, poisoning may result.

“When crabbing opened up the following year, we went crabbing and I took the crabs back home, and my wife wouldn’t eat them until they were cleaned,” said Calkins. His wife, Lena, had read about domoic acid and took a hard stance.

When a whole crab is cooked in liquid, domoic acid may leach into the cooking liquid. “We had never cleaned them ahead of boiling them,” said Calkins.

The two old friends continued crabbing for a couple weeks when one day, Calkins showed up with a surprise. He had a 2 x 6 piece of wood with a piece of aluminum he had embedded upright. The idea was to design a product that made cleaning crab quick, easy and with no waste. By putting a crab on the steel edge and giving it a smack, the crab is cut down the middle with the guts remaining on the top shell (carapace). A pull on the legs of each side releases the body from the shell, and then a shake of each side releases the lungs and any remaining guts.

With the Crack’n Crab, a Dungeness can be cleaned in as little as 40 seconds.

The fishermen continued to brainstorm for a few days on the idea. “Nobody wants a big clunky three-dimensional thing to store on a small boat. So, we wondered how we could store it flat so it wouldn’t take up too much room or risk someone getting injured by stepping on it,” Thiessen said. Their idea was a two-piece product where the metal gauge is interlocked onto the base when not in use.

Within three weeks, Calkins and Thiessen had a working prototype and sold the first Crack’n Crab in November of 2017. In 2018, they patented their invention. “We made 250 to start with,” said Thiessen. “We knew if nobody liked them, we would have Christmas presents for family and friends for the rest of our lives.”

Those 250 Crack’ns, as the inventors call them, sold out in three weeks.

But early on, the two discovered another problem and set out to solve it. “It came up after we lost three of them,” explained Calkins. “So, we brainstormed again and came up with a float that is attached with Velcro. It won’t sink if it goes into the water and is comfortable when measuring the crab.”

Englund Marine, located on the Newport Bayfront, was the product’s first retailer, and the owners invited Calkins and Thiessen to set up a table with the Crack’n Crab in their booth at a sportsmen and outdoor show. “We came out of that by selling 450 Crack’n Crabs,” said Thiessen. The product is now in nearly 50 retailers from Alaska to the Bay area.

Both men are retired mechanical engineers and worked at an aerospace company in southern California for a time. They both agreed they weren’t looking for a job, but they certainly enjoy the dividends. “It does help support our fishing habit,” said Calkins. The men own and harbor a boat in Newport’s South Beach marina.

The Crack’n Crabs are manufactured in the Salem area. “The production facility,” they say in quotes, is in Calkins’ garage. The stainless-steel gauges are sourced from a laser cutter in Salem, and the food-grade cutting board plastic comes from a factory in Wilsonville. “We get those as blank square blocks, and we do the machining on them,” Thiessen explained. “We cut the slots, cut the holes, and route all four sides. We assemble them and package them ourselves, in our ‘production facility.’ One of us has touched every one of these that are made.”

Through trial and error, the business partners have also dialed in the perfect way to cook the cleaned crab, and it isn’t boiling them. “When we first used the Crack’n, we boiled them just like how we used to cook them when they were whole,” said Calkins. “The water washed out the flavor, and we didn’t like the way they tasted. Someone recommended we steam them, and that is the only way we cook them now.”

After steaming the cleaned crabs, they recommend plunging them into a sea salt/ice water bath. “The temperature cools them down fast, and then the crab absorbs some salt,” explained Calkins. “When you are cooling so fast, it also pulls the meat away from the shell, which makes it easier to pick.”

Another benefit of cleaning crab before cooking is that they also last longer in the refrigerator after they are cooked. After they are cleaned, rinsed and put in a plastic bag, they can be placed on ice and transported without the concern that they might die. Crab cleaned in this method also allow more to fit in a cooking pot.

More and more people are switching to the Crack’n Crab and the recommended steaming methods. “There are a lot of converts out there,” Thiessen said. “And it’s been a really fun process. Taking an idea, to making a product and seeing people using them at the cleaning station, just about anytime we are there, is just really cool. It’s always fun to get feedback from other fishermen about how much they love the product.”

Their website is tealcrab.com. Teal is an acronym for the business owners and their wives: Tony, Eugene, Alison and Lena. “Naming the business and the website were the most difficult things we had to decide in the beginning,” Thiessen said.

As for what is next for the two inventors, or problem solvers, they say they are planning a new product, but it is still in the works. It’s a safe bet it involves something to do with fishing. “We fish and crab a lot,” Thiessen said. “And we eat a ton of crab. We are here. We live this.”