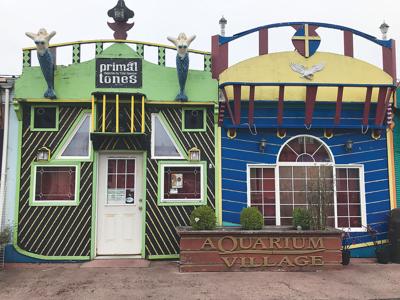 Newport’s Aquarium Village, just south of the Yaquina Bay Bridge off Highway 101, is a unique destination to begin with. Add to its menu the reimagined Primaltones storefront, now much more than a gallery dedicated to the didjeridu, and visitors and locals of all ages are promised an experience they won’t find anywhere else in the state.

Primaltones, at 2925 SE Ferry Slip Road, is the creation of Tyler Spencer, a Eugene native and Newport-area resident of a little more than 10 years, who’s dedicated himself to playing, constructing, giving lessons and promoting the didjeridu.

A cylindrical wind instrument originally developed more than 1,500 years ago by Aboriginal tribes in northern Australia, the didjeridu, which can measure up to 10 feet long, is played by continuously vibrating the lips while applying technical breathing techniques. The didjeridu gained popularity in the U.S. in the late 1980s, when Australian culture became all the rage.

“I feel like Newport has become, or the central Oregon coast really, has become a hub for the North American didjeridu, and I’m proud to say I represent that here at Primaltones,” Spencer said late last week. “I enjoy sharing my experience with the instrument and what I know about it and teaching people how to play. It’s what I really love. It’s my passion.”

Primaltones celebrated its grand reopening — and the reinvention of Primaltones’ gallery space — last Saturday, with a full day of family-friendly activities, including live music performances and fire dancers.

“If you’re interested in learning about the instrument, this is the place to come,” Spencer said. “But also, what we’ve evolved into here, not only are we a didjeridu gallery now, but we’re a community venue. Now we host family entertainment, live music, workshops, seminars. Our predominant thing here is family entertainment and live music.”

Spencer makes and sells didjeridus as his primary business, and several of his creations adorn the walls of the Primaltones’ gallery space. About six months ago, he moved Primaltones to its current location. It now hosts a small stage for live performances, and Spencer holds a license to sell beer, wine and cider to his over-21 patrons.

A special attraction at Primaltones — booked throughout the summer — is Commander Salamander’s Super Circus Sideshow. The commander performs his variety show, featuring circus, sideshow — and a few wild-west stunts not to be tried at home — six times a day. It’s a spectacle the area’s younger visitors shouldn’t miss during Primaltones’ current, regular business hours: 11 a.m. to 4 p.m. Thursdays through Sundays.

“It’s fantastic having (Commander Salamander) be a part of what we’re doing here at Primaltones,” Spencer said. “People love it. There’s always smiling faces coming out of here after the show, and he gets the kids up there for some interactive fun. If you want something really unique, check out the Commander Salamander show and stay tuned for more live events happening soon.”

To learn more about Primaltones, go to its website (https://primaltones.com) or Facebook page. To view Spencer’s online musician profile and biography, go to https://www.reverbnation.com/rpk/tylerspencer.