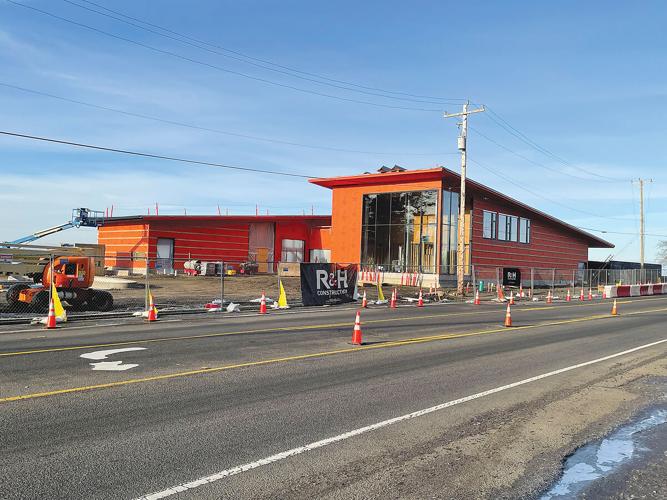 Pelican Brewing’s newest location, at 5911 SW Highway 101 in Lincoln City, is nearing completion and is expected to open in mid-April. There will be a large amount of both indoor and outdoor seating available, providing people with panoramic views of Siletz Bay. (Photo by Steve Card) 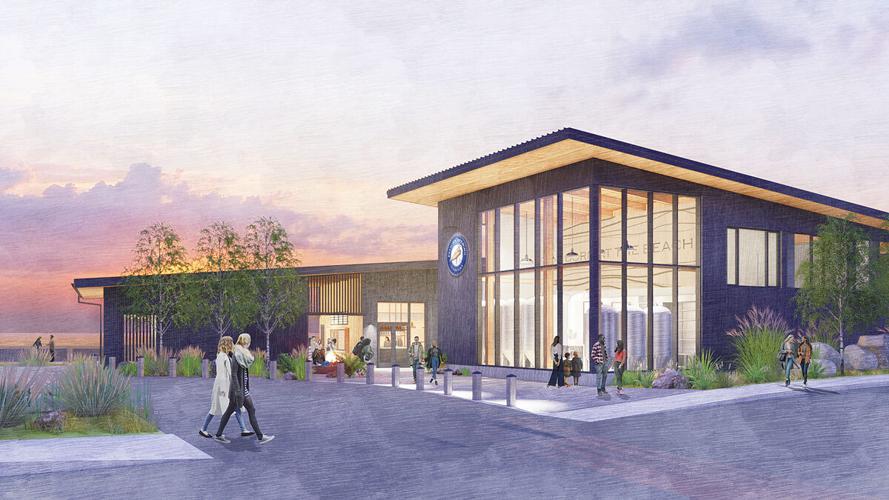 This artist rendering shows what Pelican Brewing’s new location in Lincoln City will look like.

Pelican Brewing’s newest location, at 5911 SW Highway 101 in Lincoln City, is nearing completion and is expected to open in mid-April. There will be a large amount of both indoor and outdoor seating available, providing people with panoramic views of Siletz Bay. (Photo by Steve Card)

This artist rendering shows what Pelican Brewing’s new location in Lincoln City will look like.

LINCOLN CITY — Pelican Brewing Company’s new location in Lincoln City is on track to open in mid-April, and the owners have a few exciting amenities they are anxious to debut.

Mary Jones and Jeff Schons founded Pelican Brewery in 1996 in Pacific City and later built locations in Tillamook in 2013 and Cannon Beach in 2016. While all the locations are different in construction and feel, the Lincoln City location has a variety of outdoor spaces that will take advantage of the spectacular views of the Siletz Bay.

“One of the very few benefits of the COVID world was it made us stop and think about what people really want now and what we could provide that’s really interesting, fun and provides great views,” Jones said. “Out of that came really interesting and new options in outdoor dining.”

The Inglenook, located on the south side of the restaurant, is a combination indoor/outdoor area that will have an outdoor kitchen and a live crab tank. It is not a heated space, but it is roofed and open to the water. Jones said they plan to make that area available by reservation and serve something similar to a New England-style crab boil — something uncommon on the Oregon coast. “We think it will be a popular spot to reserve and have something kind of special,” Jones said.

In addition to the Inglenook, the outdoor seating areas, which have a capacity of about 150, will include some covered and open-air spaces, a casual place to get a beer and hang out on the deck without being seated at a table, and an area with some outdoor fire pit tables.

“We really enhanced the outdoor seating,” Schons explained. “When COVID struck and we had to halt construction for a year, it became obvious that outdoor dining was a thing of the future. We also have a to-go and pick-up window, which wasn’t in the original plan. We are really excited about that.”

The way the building is laid out really takes advantage of the bayfront site and views. “It’s really going to be exciting,” Schons said, adding that the Lincoln City location is their first brewery on Highway 101 and the only one directly on the water.

The building itself is also unique, with dramatic and opposing roof lines. “It’s unusual and totally different from anything we’ve done before,” Jones said. “We try to make each Pelican fit the site and the town, rather than have them all be the same. We are trying to make sure we are providing what the customer wants in a particular location. We also want to make sure that people are interested enough to visit the other locations. If you do cookie-cutter, why would someone go to all of them? They are all unique and special in their own way.”

The owners have rented space at the Lincoln City Culinary Center, located on the fourth floor at City Hall, 801 SW Highway 101, which will be a spot for prospective employees to apply and interview, as well as a training and team building hub for staff. Their plan is to be open there six days a week for eight hours a day, beginning Feb. 15. “It’s going to be an amazing facility for us to meet people and have them do applications onsite,” Jones said. “The cooking facilities will allow us to do some training ahead of opening, which is always incredible.”

Many of the management team positions have already been hired, and they are starting the process of hiring non-management positions. “We are really excited because we feel we have a great pool of people already coming forward, reaching out and excited that we are getting close to opening,” Jones said. “We’ve received a very warm welcome in Lincoln City.”

Jones said part of the company’s goal is to provide a really great work culture with a good work/life balance. Part of that includes offering a robust benefits package, including health insurance for all full-time people, paid vacations and an employer matched 401K.

Anyone interested in employment can go to beachjobscalling.com. The site lists jobs over the entire family of companies, including some lodging facilities. Or stop at the culinary center to speak to a human resources agent after Feb. 15.

As far as future expansion, Jones and Schons were quick to say nothing is in the works right now. “This was a really big undertaking for our group,” Jones said. “This is a heavy lift to get this up and operating the way we want it to, so we are not thinking about the next thing. The focus is on getting this location up and running. We are feeling pretty great about our team and our ability to make sure this comes out of the box at the right level of service.”