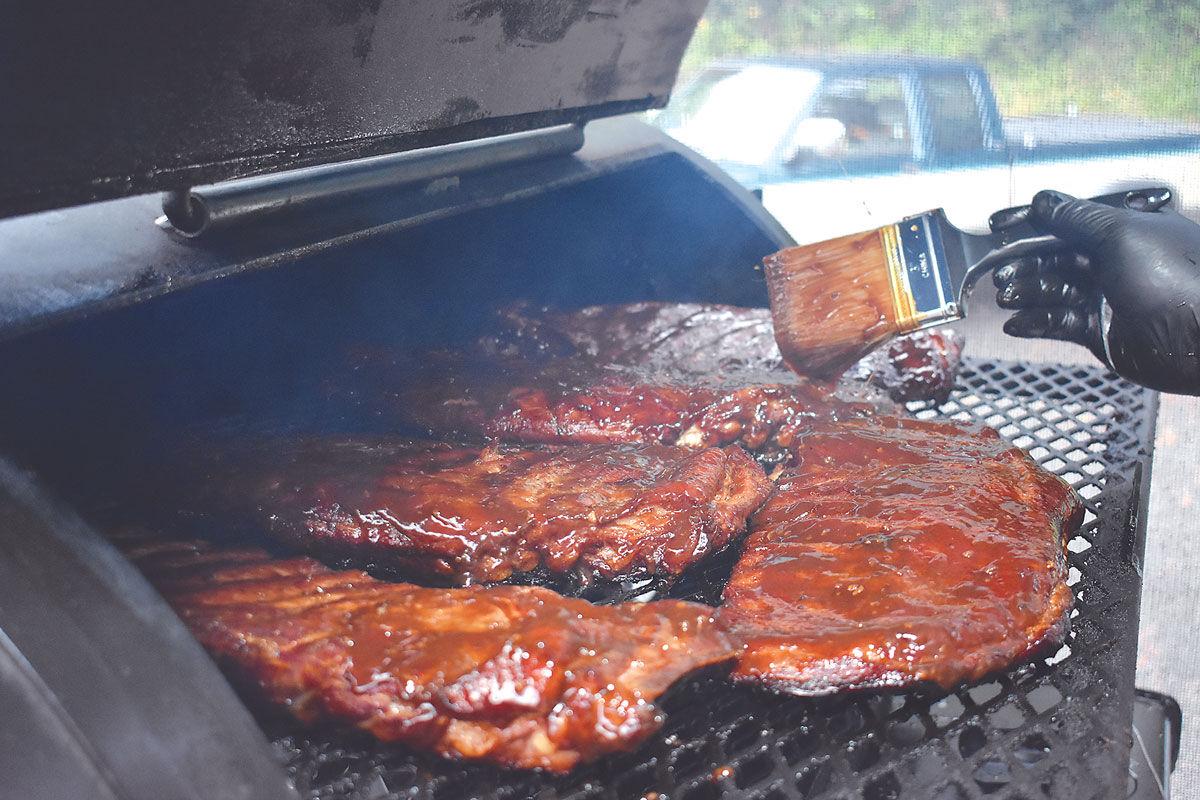 Barbecued ribs sizzle on the grill at Pat E Mac’s BBQ. The popular food truck can be found at events around Lincoln County. (Photos by Mathew Brock) 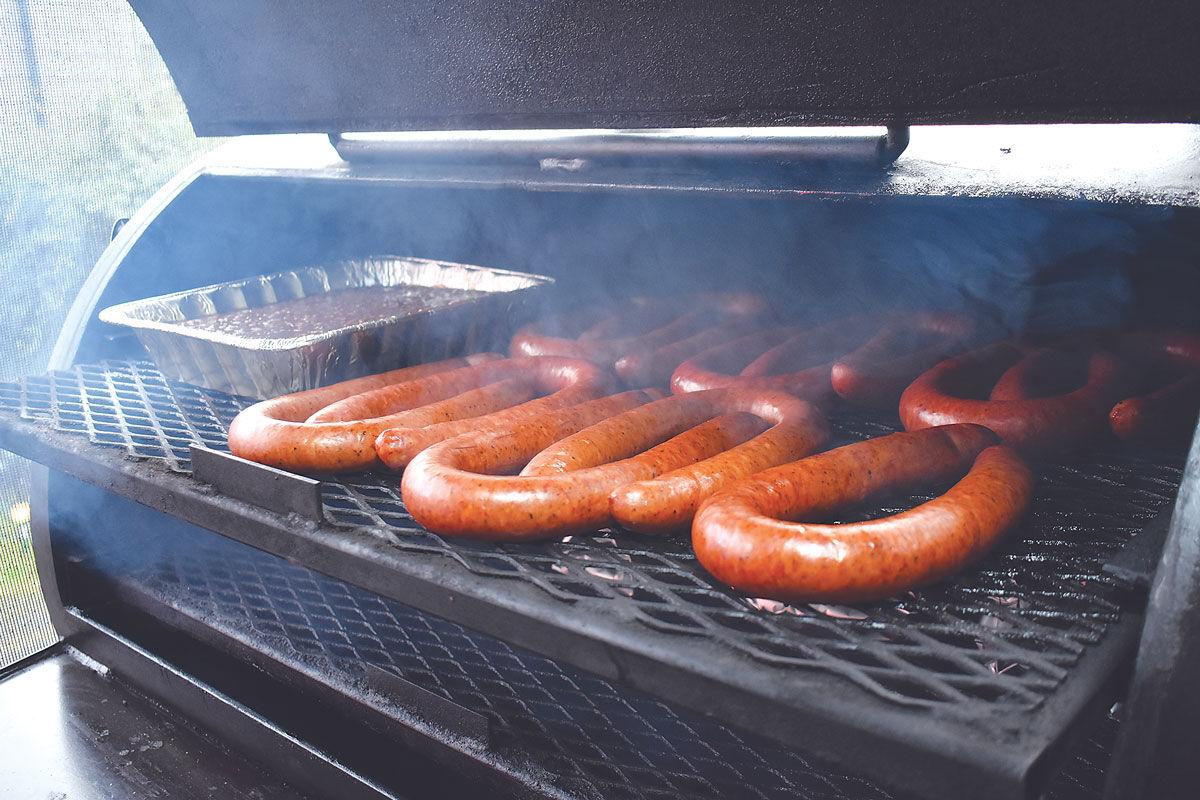 Pat E Mac’s BBQ’ Facebook page and website (www.patemacsbbq.com) provide details on where they will be selling barbecue and how to order food in advance. 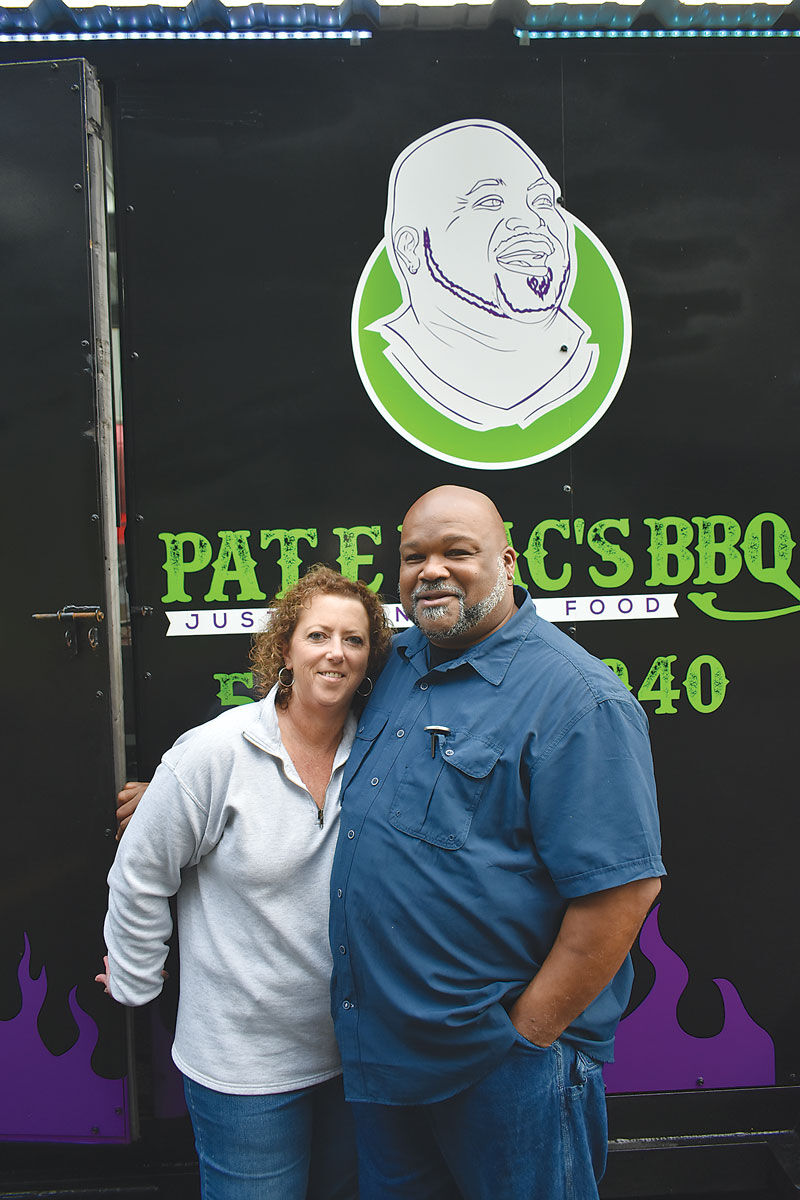 Beth and Pat McKnight are the owners of Pat E Mac’s BBQ, a classic southern barbecue food truck based in Newport.

Barbecued ribs sizzle on the grill at Pat E Mac’s BBQ. The popular food truck can be found at events around Lincoln County. (Photos by Mathew Brock)

Pat E Mac’s BBQ’ Facebook page and website (www.patemacsbbq.com) provide details on where they will be selling barbecue and how to order food in advance.

Beth and Pat McKnight are the owners of Pat E Mac’s BBQ, a classic southern barbecue food truck based in Newport.

McKnight is the owner of Pat E Mac’s BBQ, a classic southern barbecue food truck based in Newport. It’s a family-owned business that was started by Pat, his wife, Beth, and their children. But Pat’s journey to pitmaster started when he was a young boy.

“My mom and grandmother were great cooks,” McKnight recalled. “They used to cook for churches and sell small meals on the weekends. Back in the day, they fed the entire neighborhood.” McKnight said his grandmother, Elversie, was a pitmaster long before that phrase was coined. “She could cook. I mean she could COOK.”

His mother and grandmother cooked traditional southern food and also Cajun dishes like jambalaya and gumbo. “We did it all back then,” he said. “We fried or we died. It was about making people feel good when they ate.”

When the McKnight family moved to Newport about five years ago, a friend suggested they set up a booth to sell barbecue at the Newport Farmers Market. McKnight was told the event was pretty small, so he planned accordingly. “The first time, we cooked five pork butts to sell meals with coleslaw and beans. It was about 55 meals. We opened at 9 a.m., and we were sold out by 10:30 a.m. The market has a rule that you can’t close early so we just sat there for three-and-a-half hours. We just didn’t know.”

The following week, they cooked eight pork butts and sold out again before noon. “People just kept saying they had never had barbecue like that,” said McKnight. “We thought then that it might be a thing.”

They continued to set up at the farmers market and each month added something different — ribs, briskets, tri-tip, and sausage links. “We had the holy trinity there — beef, pork, and links. We were out there, rain and shine, then decided we just couldn’t do the rain anymore.”

The more it started to rain, the more he started to rethink how to move forward. McKnight had a friend in Texas build a large barbecue pit. “The pit is a true wood fire — no coal, no electricity, no propane. It’s true downhome barbecue right here in Newport.” The truck is set up at special events while mandates are still in place. “We go where they call us, and we stay pretty busy,” McKnight said.

The COVID-19 pandemic had some positive impacts for his business, McKnight explained. “That is when we really grew. We were able to provide take out service barbecue at Bier One. With the help of Bier One and social media, we had lines out the door. We probably would have just faded out when COVID hit. But we stuck with it, and here we are.”

Though both McKnight and his wife have full-time day jobs — he’s the dean of students and athletic director at Siletz High School and Beth is a special education teacher — they still hope to someday open a brick-and-mortar restaurant. “We first thought we would do barbecue three days a week. That was the plan, and it’s still the plan. But finding a place that fits us has been hard,” he said. “We don’t want to get deep into debt to buy a property in Newport. We just want to find a small building, a shack, and I’ll be great. We’ve been offered places in other cities, and we love those places, but we need to be in Newport.”

McKnight said he always tries to make the absolute best food possible, “just damn good barbecue,” and takes customer reviews very seriously. “Fortunately, they’ve all been good reviews. The worst comment we ever got was that the coleslaw could be better. I thought, “How much better could coleslaw get?’”

When asked if he used secret family recipes, McKnight said he doesn’t really say they are secret. “Except that we don’t tell anybody,” interjected Beth. Back in the day when his grandmother worked the pit, they didn’t have a variety of seasonings so just relied on the basics. “We still believe in the S.P.G. — salt, pepper, garlic. We are straight up barbecue people — Southern barbecue with a Pacific Northwest twist. We’ve been all over the country eating different barbecues, and we have tried new ideas, but it always comes back to plain and simple: salt, pepper, garlic.”

Pat E Mac’s also caters events big and small across Oregon, southern Washington, and northern California. Catering menus are completely customizable and can include much more than just the barbecue favorites.

McKnight encourages people to visit their Facebook page and website at www.patemacsbbq.com to see when and where they will be selling barbecue and to order food in advance.

Though their children are grown, they all get involved with the food truck when they are back visiting. “It is a family thing,” said McKnight. “That’s the way my mom taught me to do it. It’s not just about the business, it’s about the family growth for us and something that pulls us all together.”