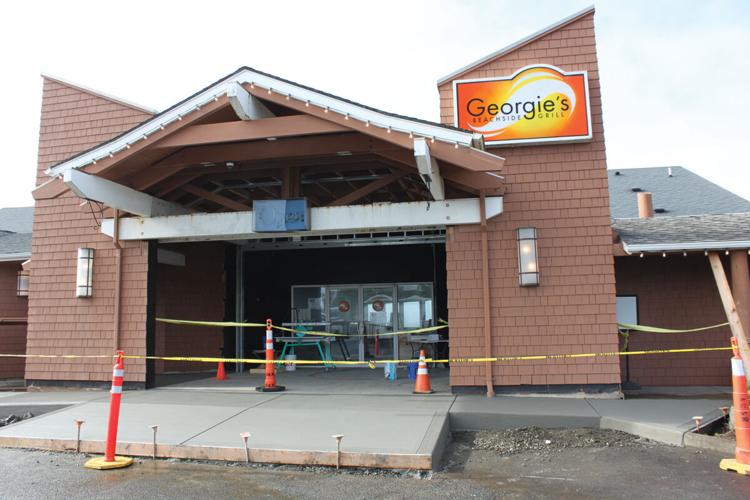 Georgie’s Beachside Grill in Newport is currently closed while the interior and exterior undergo major renovations. An exact date for reopening has not been determined but it is expected to be sometime in March. (Photo by Susan Schuytema) 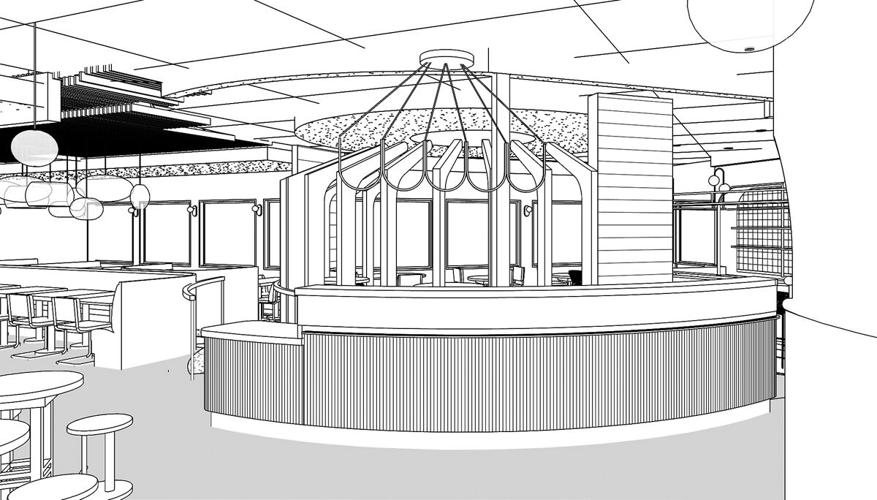 This artist rendering shows the design of the new lobby and host stand being built at Georgie’s Beachside Grill. (Courtesy graphic) 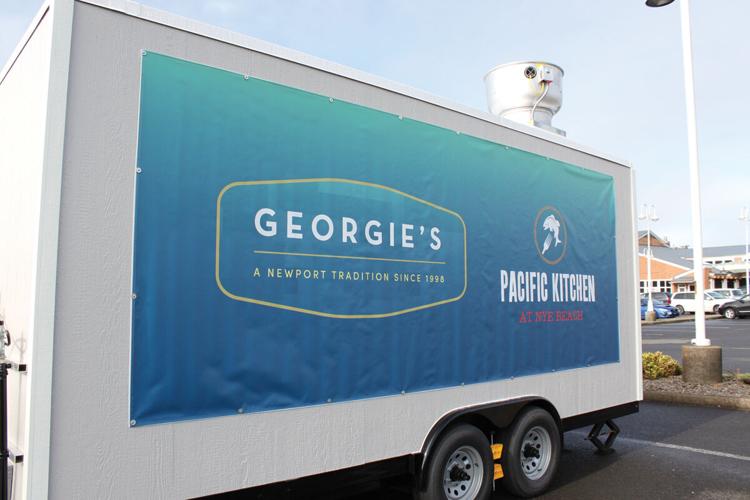 Georgie’s Beachside Grill in Newport is currently closed while the interior and exterior undergo major renovations. An exact date for reopening has not been determined but it is expected to be sometime in March. (Photo by Susan Schuytema)

This artist rendering shows the design of the new lobby and host stand being built at Georgie’s Beachside Grill. (Courtesy graphic)

Georgie’s Beachside Grill, located at 744 SW Elizabeth St., has been completely gutted and is in the process of being renovated. “We literally took everything down to the studs — the walls, the floor joists, the ceiling joists — and started completely over from scratch,’’ Ric Rabourn, Hallmark Inns and Resorts president and CEO, said. “We have a great view with remarkable service and food. The purpose of the remodel is to bring the interior up to the level of everything else we were already providing.”

The interior has had several minor updates since 1998, but this is the first complete revamp of the space. Rabourn said the new interior design will be more modern but have a similar layout with three different levels of seating in the lounge, so it takes full advantage of the ocean views.

The $1.5 million renovation will provide an expanded seating capacity for larger parties. “We will seat 155 guests in our new configuration versus 145 in our previous design,” Rabourn explained. “The biggest gain in the reconfiguration is the ability to accommodate significantly more parties of five to six people than previously.”

The entry is being enlarged to allow more space in the lobby area for people waiting for a table and to help with the flow of traffic. Tables will be added in that area so people can sit and have a drink and appetizers.

Rabourn said the design will have several new features while still invoking the ocean and the Pacific Northwest. “The curved wall behind the host stand is a variation of different blue and green blocks, which will allow a lot of light to come through,” he said. “It definitely reflects the ocean.” Other design elements include the use of natural woods, a huge back bar and special lighting. “Everything is designed to the hilt — nothing will be mundane or average. We really pushed our limit.” Rabourn said the popular treasure chest with small gifts for children will be incorporated into the new design.

The menu items and the prices will remain the same as long as wholesale pricing remains consistent, according to Rabourn.

Though diners cannot currently eat inside the restaurant, the kitchen is still operating with take out, room service for guests, catering and banquets still available.

Another new feature will be the debut of their own food truck operating on site in the coming weeks. The food cart will have specific lunch and dinner hours and initially operate on Fridays, Saturdays and Sundays only. “We will determine the demand and probably expand hours after spring break,” Rabourn said. The truck will have a limited, unique menu that includes items such as clam chowder, grass-fed beef sliders, veggie burger sliders, salmon fish and chips and fish tacos. The hours of operation are not solidified, but Rabourn said there will be lunch hours followed by a short closure, then dinner hours.

The COVID pandemic caused labor shortages everywhere, but the hospitality sector has been particularly hard hit. “We were 25 to 30 percent understaffed last summer,” Rabourn said. “It’s too early to tell where we will be this year. We are ramping up hiring efforts as we get into spring and summer.” Anyone interested in employment can apply online or apply in person at the front desk.

Most of Georgie’s regular staff have been working in other departments of the hotel while the renovations are being completed and will return to their former jobs when the restaurant reopens.

Despite the construction remaining on schedule, it is too early to announce the exact reopening date. “Our hope is to open the first week of March, but we are dependent on the timing and schedule of the inspectors,” Rabourn said. “Even with the interior being greatly enhanced, we will be the same relaxed, upscale family restaurant we’ve always been.”