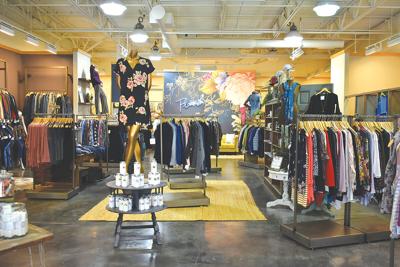 Manager Holly Hubner and owner Karry Blodgette pose in front of the Flourish Boutique sign inside the store at the Lincoln City Outlets.

LINCOLN CITY — With 20 years experience in women’s fashion and an eye for the latest trends, Karry Blodgette wants to bring a new type of women’s clothing boutique to Lincoln City, mixing and matching new and old styles to cater to local shoppers and coastal visitors alike.

In collaboration with her son, Grant Blodgette, and with help from store manager Holly Hubner, Blodgette opened Flourish Boutique at the Lincoln City Outlets three weeks ago, with a grand opening event set for this Thursday, June 24, from 5 to 7 p.m.

Just prior to the pandemic, Blodgette made plans to close her previous women’s clothing store in Depoe Bay, Converge, after 12 years at that location in order to open a new store at Lincoln City.

Blodgette planned to close Converge even before the pandemic broke out as she wanted to start catering to new trends she’d seen in the women’s fashion industry. The timing ended up being convenient, as the pandemic would have reduced Converge’s already limited floor space.

“We had a beautiful following in Depoe Bay, and it was a really hard decision to close, but I looked at what I was expecting to happen in better women’s fashion and ended up having concerns with price points and quality,” Blodgette said. “Now we’re working with around 3,500 square feet, compared to the old store, which was cramped with all of the merchandise we had.”

Moving to Lincoln City also situates Blodgette closer to many of her long-time customers, as well as opening up a bigger market from mall shoppers and out-of-town visitors.

“Lincoln City puts us a little closer to our peeps since a lot of them were coming from Lincoln City to Depoe Bay just to see us,” Blodgette said. “This location is a little more central. We also have the benefit of having our longtime followers from before mixed in with the new mall traffic.”

As for what Flourish offers, Blodgette wanted to reimagine what she was doing with a clothing store and switched gears from a store that catered to women over 40 to something that catered to all ages, body types and styles.

“Flourish is kind of a new concept where we’re trying to take new fashion, or new women’s boutique fashion, and mix it in with some gently worn resale and some true vintage pieces. It’s for a bunch of reasons, but mostly so people can make their own style,” Blodgette said. “They can pick the pieces to make their own look and their own vibe. It also helps bring the price points down. It helps bring high-quality fashion at about half or less than half the normal pricing. We really want to uplift and empower women, so we carry sizing from extra small through triple X.”

Some notable brands Flourish carries include Madewell, Lucky and Michael Kors, the rest of its stock filled out by vintage clothing and resale.

With COVID restrictions now loosening, Blodgette was also able to open her dressing rooms and hopes to soon be able to let customers shop without masks. For now though, she said she’s been very mindful of the proper COVID-19 protocols.

“It’s very hard to shop for women’s fashion if you can’t try stuff on or have a mask on because obviously you want to see yourself fully in that outfit,” Blodgette said. “Hopefully, soon we’ll be safe enough to go without them, but until then we’ll be working hard to make sure everyone has a comfortable, safe experience.”

Later down the line, Blodgette also plans to help organize charity clothing drives in Lincoln City with local nonprofits once things finally begin to return to normal. Some of the higher end clothing from those drives will then be sold in Flourish to help raise money.

Flourish is open during mall hours from 11 a.m. to 7 p.m. daily. Customers are also welcome to call in ahead of time (541-614-4046) to schedule personal shopping appointments with a staff member. To learn more about Flourish or to schedule an appointment, go to https://lincolncityoutlets.com/stores/flourish-boutique