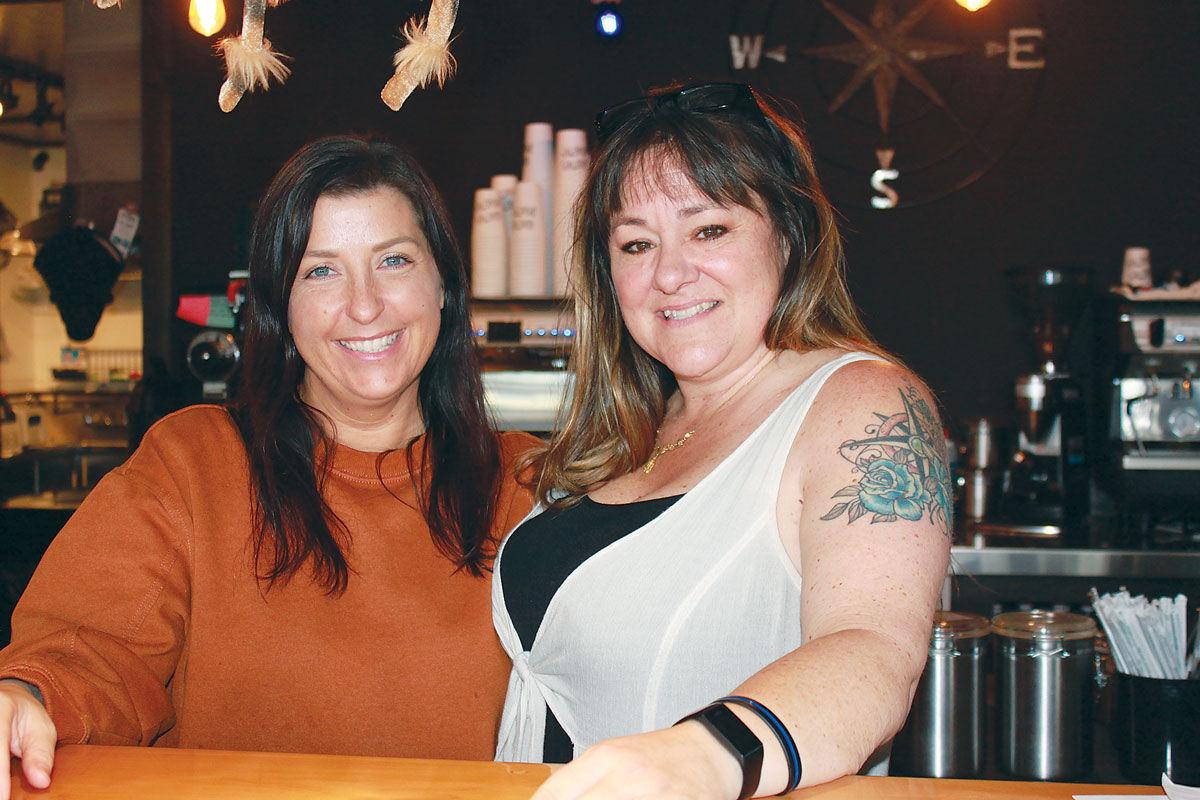 Rachelle Howell, left, owner of Coasties Roasties in Newport for five years, stands next to new owner Maria Rock. The coffee shop and bakery in Newport’s Deco District on Highway 101 will continue offering the same coffee and baked goods with the addition of some fresh seafood items as well. 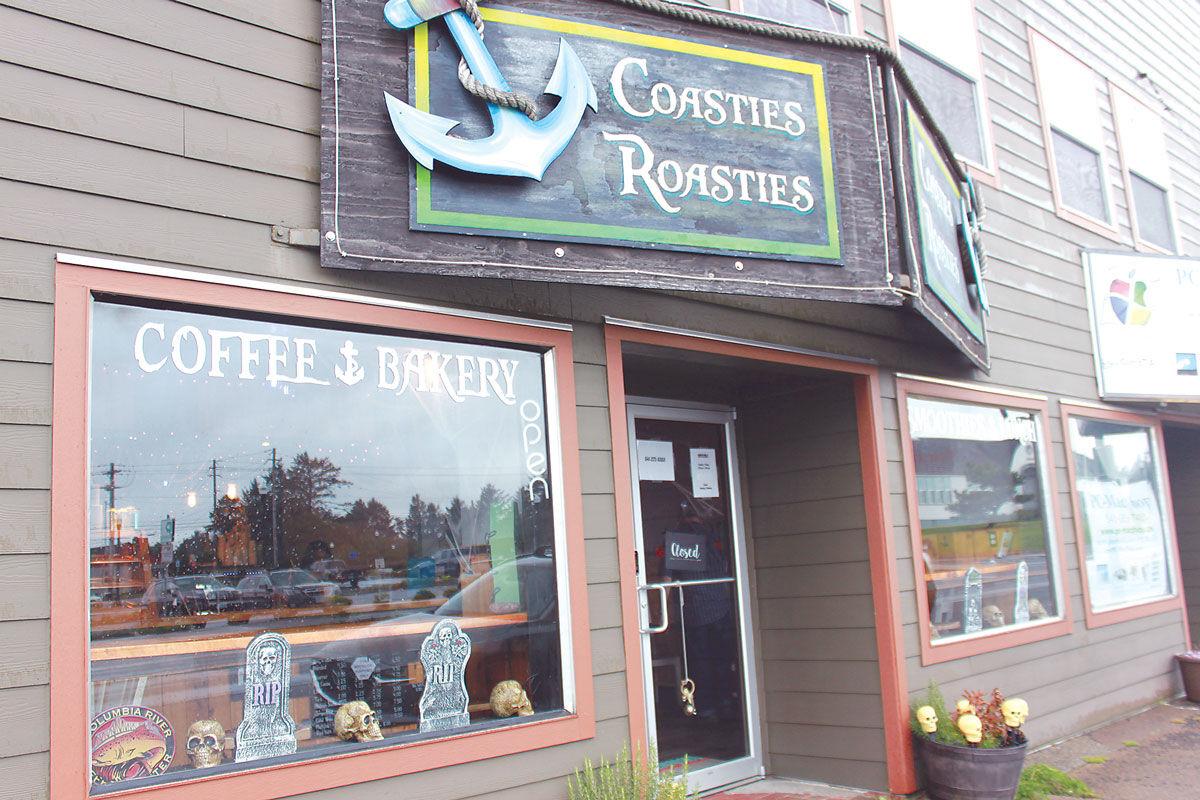 Coasties Roasties has reopened under new ownership. Maria Rock bought the coffee shop and bakery from Rachelle Howell, who is relocating with her family to Tennessee. (Photos by Susan Schuytema)

Rachelle Howell, left, owner of Coasties Roasties in Newport for five years, stands next to new owner Maria Rock. The coffee shop and bakery in Newport’s Deco District on Highway 101 will continue offering the same coffee and baked goods with the addition of some fresh seafood items as well.

Coasties Roasties has reopened under new ownership. Maria Rock bought the coffee shop and bakery from Rachelle Howell, who is relocating with her family to Tennessee. (Photos by Susan Schuytema)

NEWPORT — A locally owned coffee shop in Newport is under new ownership.

The sale of Coasties Roasties in the Deco District on Highway 101 was recently finalized, and the new owner, Maria Rock, is jumping into the caffeinated water with both feet.

It all happened pretty fast, according to Rock. She was getting ready to board a plane when she received a phone call from Coasties Roasties owner Rachelle Howell. Howell broached the idea of Rock buying her coffee shop. “I got off the phone and thought, ‘Holy crap. Did that just happen?’” Rock’s husband is a third-generation commercial fisherman, her son is grown, and her daughter, Kylie Lynn, is out of school and will be moving away from home eventually. “It was the perfect timing. My daughter worked at another coffee shop so had some experience. All the pieces clicked. They made it official that they were going to sell, and we got the ball rolling in early September.”

Howell and Rock have known each other for several years. They worked together at the now closed Espressgo in South Beach, and Howell’s husband worked on Corey Rock’s fishing boat. “I always knew Maria wanted a coffee shop, so I thought I would see if she was interested,” Howell said. And she was.

Howell opened Coasties Roasties in 2017 after realizing that she wanted something she could call her own. “I told my husband that I loved taking care of our kids and my mom, but I wanted something that was just for me. So, we decided to do it.”

She felt Newport at the time was lacking a coffee shop with high quality ingredients like real fruit smoothies, quality syrups and chocolate, and homemade caramels. “I finally pulled the trigger and I did it,” Howell said. “I built it from the ground up, and it became a success. I baked at home and was self-taught. Obviously, it is a hit.”

For the first two years, the business was a drive-thru on Highway 20, where Bow Wows Grooming now stands. They outgrew that place and moved to its current location next to Bank of the West in April of 2019.

Howell said she was fortunate she had a good clientele and solid reputation before the COVID-19 pandemic hit. The business was closed for about four months due to COVID but has come back stronger than ever. “January and February were slow this year, but by March, we really picked up,” Howell said. “We are actually doing more business now after the pandemic than before it. Being closed didn’t hurt us financially, so I’m thankful for that.”

Howell’s decision to sell the coffee shop was spurred by several factors, but her family was at the core of it. “The past five years I have dedicated my life to this business, day in and day out,” Howell said. “My children were ages five and 11 when I started this, and now they are 11 and 16. And I feel like my kids and my home have been neglected. I felt I needed to be with my kids more before they were out of the house. We wanted to change.”

When Rock agreed to buy the coffee shop, the two began working together every day to get Rock up to speed on all the aspects of the business, including the espresso machine, baking recipes and all the administrative details of business ownership.

Rock said she isn’t a trained baker but has learned the recipes and is confident in aspects of running the business. A challenge she had to overcome was an early morning alarm clock. “I had to get up at 3 a.m. in the morning, and that was a challenge at first,” said Rock. “I am not a morning person. But now I am excited about it. I get up and jump out of bed and I’m gone.”

“Well, jumping is an exaggeration,” joked her husband, Corey.

Rock said customers of Coasties Roasties will not notice many changes at first, since she plans to keep things the way they were under Howell’s ownership. “Don’t fix it if it ain’t broken,” she said. “They’ve done really well here. I just love it. Couldn’t ask for a better walk-in and go-to-work kind of shop.”

But since her husband is a fisherman, she plans to introduce seafood menu items in the future. “Adding locally caught, sustainable, high-quality seafood is high on the list,” Rock said. Food items such as crab and cream cheese puffs, crab quiche, and crab spread on bagels are menu items that are under consideration.

Rock said Coasties Roasties will be open six days a week if she can pull it off with the staff she has and with help from her family. “There will be a lot of trial and error,” she said.

Howell is pleased that Rock is taking over and wants to see the business she built continue and succeed. “I hope everyone still continues to support Coasties Roasties and keeps it going strong,” she said. “It will have the same coffee, the same espresso, the same treats. Maria will just be adding more yummies and more food.”

Howell also gave Rock a warning of what’s to come being an owner of a coffee shop with great baked goods. “Plan on gaining weight.”

“That’s a good problem to have,” Rock said.