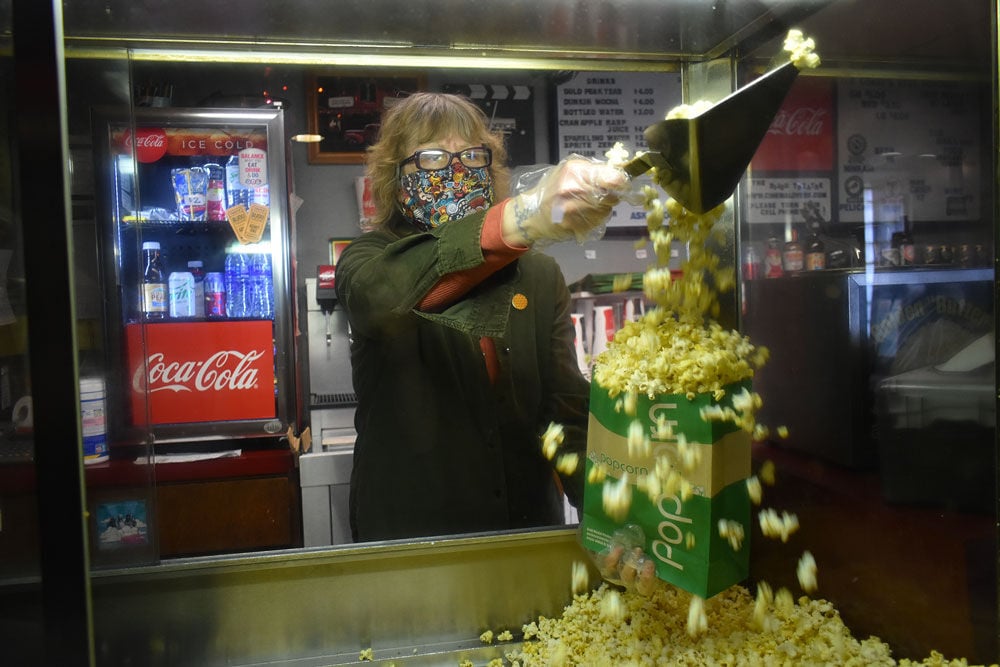 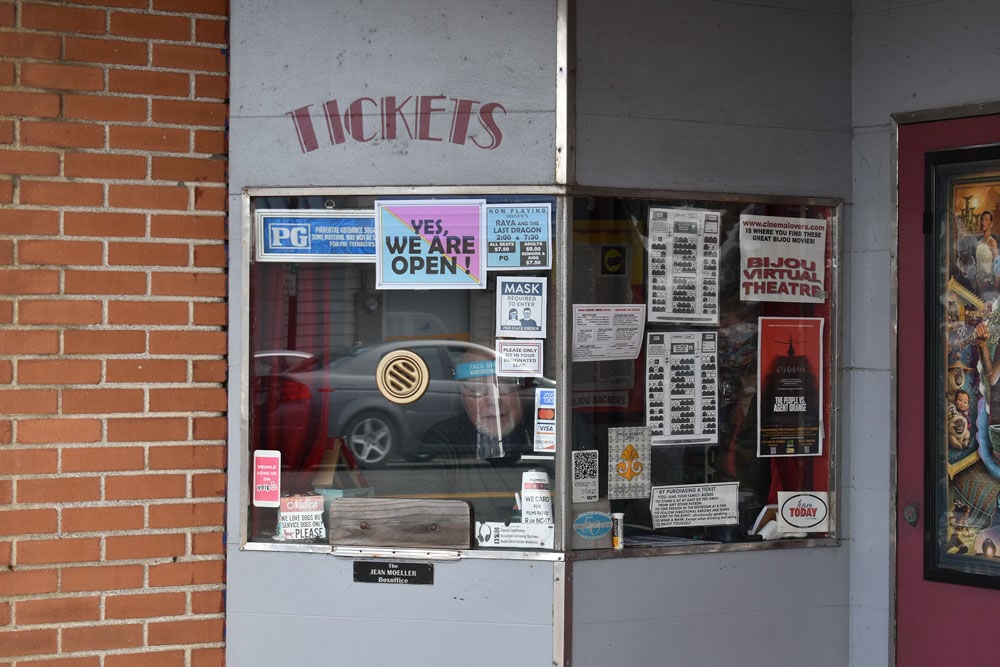 Keith Altomare sits in the box office of the Bijou Theatre in Lincoln City. 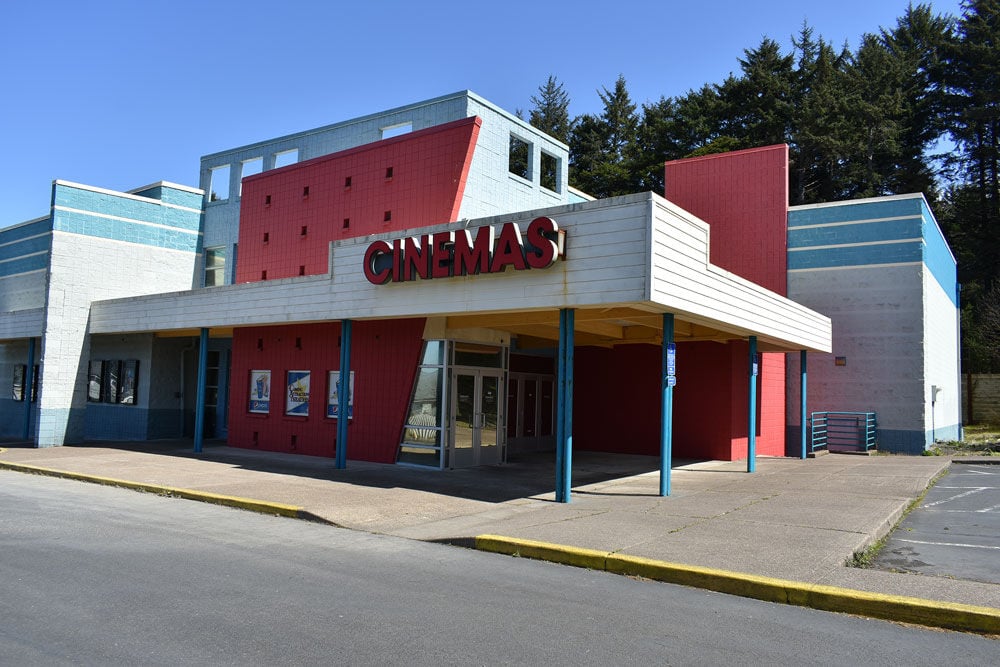 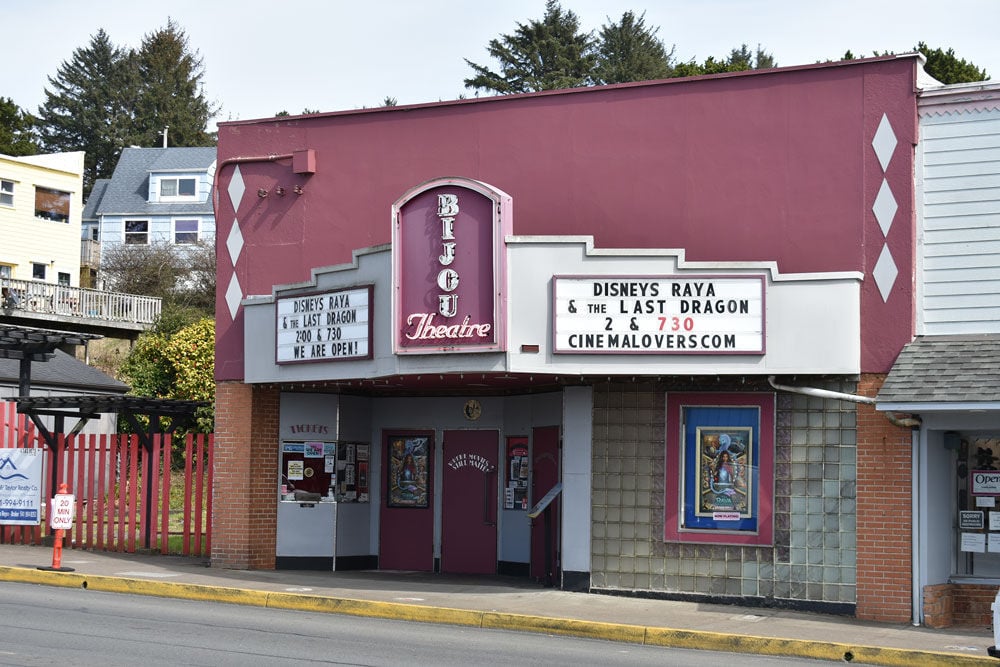 The Bijou Theatre at 1624 NE Highway 101 in Lincoln City is open for daily showings.

Keith Altomare sits in the box office of the Bijou Theatre in Lincoln City.

The Bijou Theatre at 1624 NE Highway 101 in Lincoln City is open for daily showings.

It’s been a rough year for movie-goers, with everything from off-and-on closures to ongoing COVID-19 concerns keeping crowds away from the big screen and the tight spaces of the cinema. But since the start of the year, two local theaters have reopened and are working diligently to provide a safe environment for patrons.

Newport Cinemas and the Bijou Theatre in Lincoln City reopened in January when the county moved out of the state’s “extreme risk” category, and they have stayed open since. Prior to that, they had been open sporadically as the county’s risk level fluctuated. The Lincoln City 6 theater is also eligible to reopen, but currently remains closed for ongoing maintenance work.

“We clean and sanitize after every show, we’re keeping everyone social distanced in the theater and have management checking to keep families together and making sure people aren’t back to back or too near each other,” said Mark Murin of Coming Attractions Theaters, Newport Cinema’s and Lincoln City 6’s parent company. “We’re currently down to 50 percent capacity, but other than that we’re fully open with our snack bar and everything.”

The same goes for the Bijou, which has its own cleaning regiment, a seating chart system and some new high-end sanitation equipment. Keith and Betsy Altomare, who’ve owned the Bijou for the last 25 years, even put a video of its post-showing cleaning routine on its website to give patrons a behind-the-scenes look at their efforts.

Betsy said when the Bijou reopened for a few weeks in October, they saw a big crowd the first week, but things quickly fell off. The theater’s now 30-person capacity often doesn’t end up filled, but the Altomares have been accommodating to those who have come out and have been working to spread the word that they’ve reopened.

“A lot of people walk by the box office but don’t stop by because they assume we aren’t open,” Betsy said. “I’ve even run into a few of our regulars in town at, say, the grocery store, and they ask when we’re reopening. I have to tell them we’ve been open since January.”

Keith added that the Bijou was also one of the first two theaters to reopen long term in Oregon, but he speculates the low turnout is probably a universal problem, a combination of people not knowing theaters are allowed to reopen or just not being comfortable to return yet. Keith remains hopeful things will pick up when more people have the chance to get vaccinated.

“What has to be understood, and we hope everyone gets this, is that there’s going to be a pattern of time before people come to accept things,” Keith said. “Eventually we’ll get back to selling out our same amount of seats, but really we’ve got to give people a chance to get back on their own time. Like normal.”

Even when closed, the Altomares didn’t sit idle over the last year. Early into the pandemic, the Bijou began selling bags of popcorn to go and even organized a drive-in movie at the Lincoln City Cultural Center, which they hope to continue in the future.

“People loved it, and we’re really hoping to keep it going even after all this,” Betsy said.

Those who aren’t ready to return in person can still help support their local theater however. The Bijou has a virtual theater link on its website, which, if used, gives a kickback to the theater for any films purchased and streamed.

In addition to closures, many cinemas have had to deal with a drought of new big films coming out over the last year as many studios chose to postpone their releases.

“Hollywood really just stopped releasing big movies. New York and Los Angeles were closed, and studios just kept pushing movies further and further back,” Murin said. “I’m sure we’ll get people coming back in the next few weeks when some bigger movies start coming out.”

Murin noted that he had high hopes for the recent releases of “Reya and the Last Dragon” and “Godzilla vs. Kong” to help bring people in.