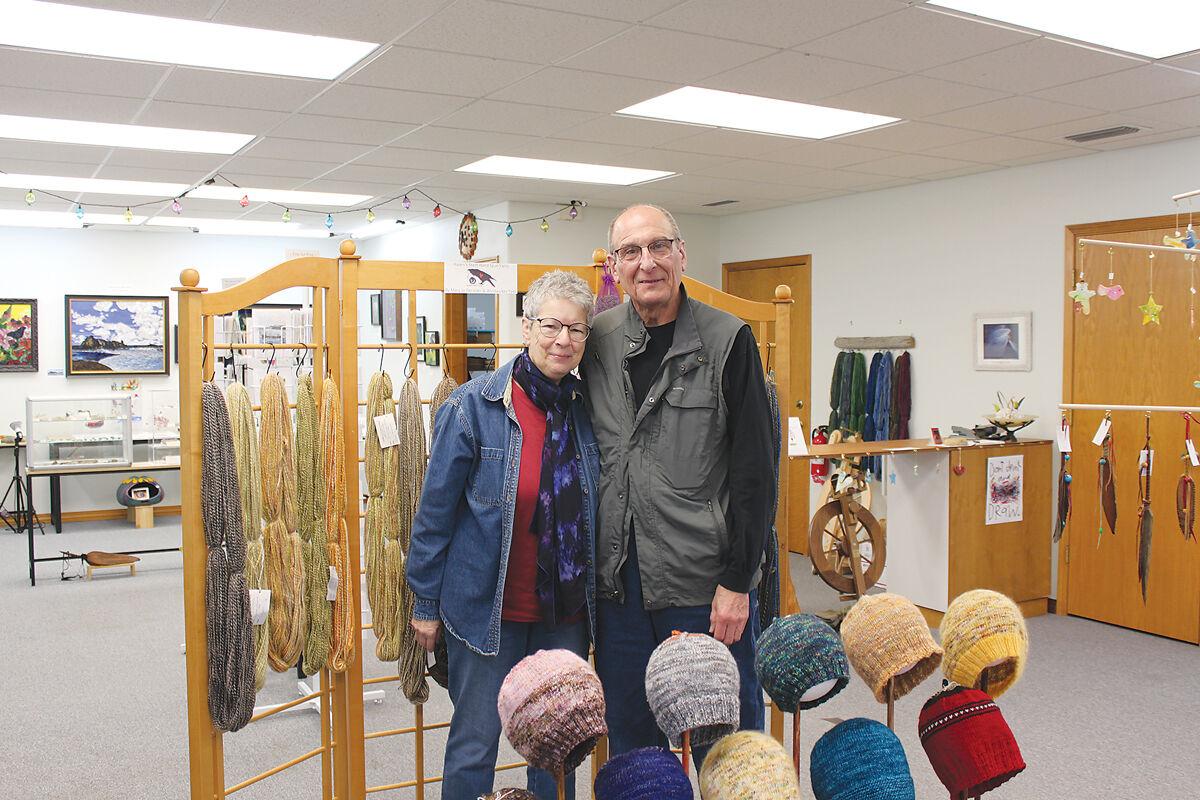 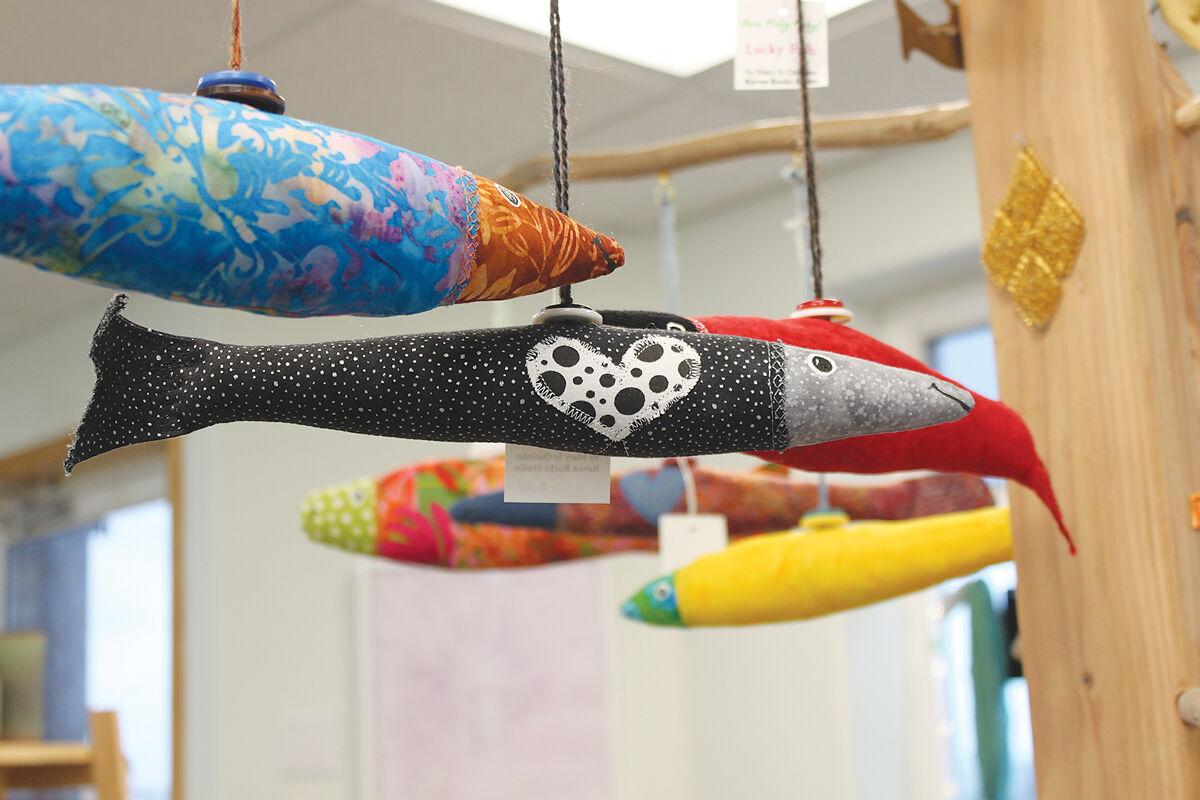 Batik “lucky fish” are some of the many whimsical creations made by Raven Rocks Gallery co-owner Mary Jo Oxrieder. 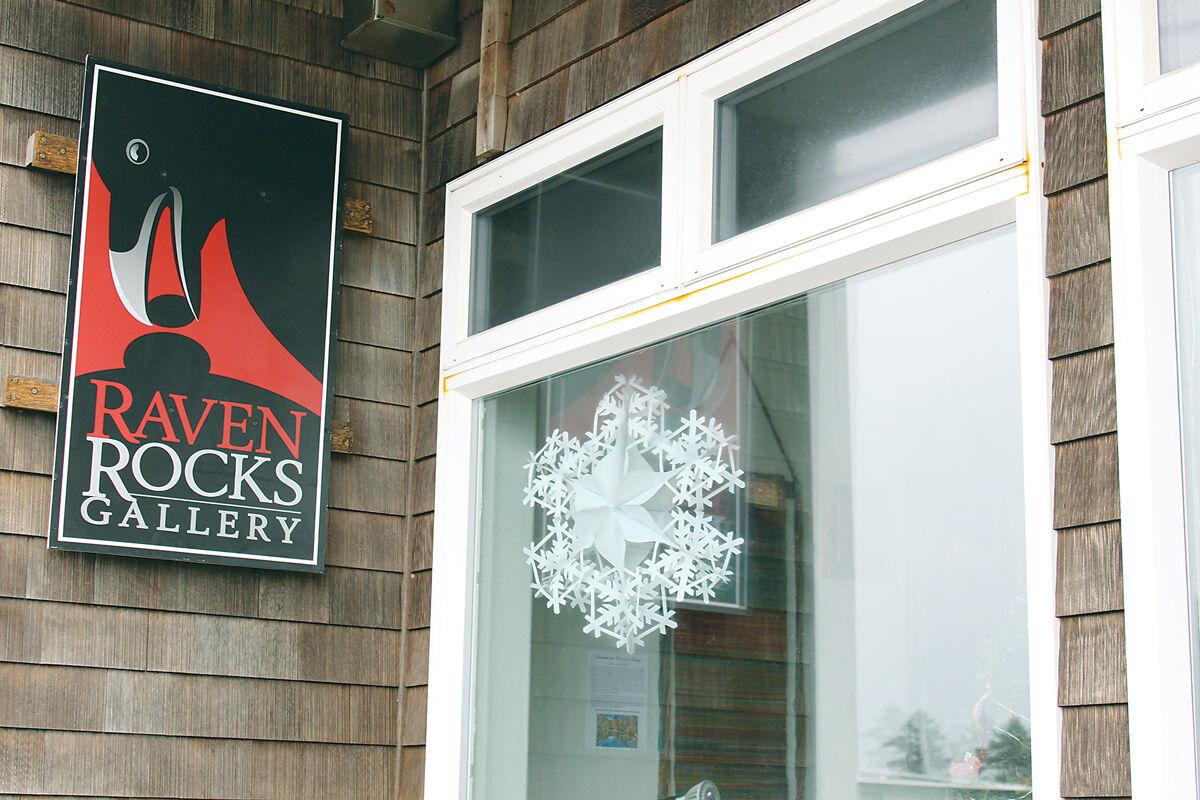 Raven Rocks Gallery on Highway 101 in Depoe Bay is open Thursday through Monday, from 11 a.m. to 4 p.m.

Batik “lucky fish” are some of the many whimsical creations made by Raven Rocks Gallery co-owner Mary Jo Oxrieder.

Raven Rocks Gallery on Highway 101 in Depoe Bay is open Thursday through Monday, from 11 a.m. to 4 p.m.

Mary Jo Oxrieder and her husband, Doug Windwalker Taibi, opened Raven Rocks Gallery this past summer in Depoe Bay. The gallery, next door to REMAX and directly across the road from the whale fountain, features not only the couple’s creations, but those of seven other artisans.

“Our big thing is whimsy,” Oxrieder explained. “We don’t consider ourselves a traditional fine arts gallery, although we have high-end things. We love the appeal of ordinary people who want to find something unique, from a $3 heart rock or $4 bookmark to tapestries and mosaics, which can go for over $3,000.”

Taibi also cuts gemstones and beach stones and has a variety of them for sale. “Something that is becoming more of a draw is that both of us are die-hard rockhounds,” Taibi said. “People are beginning to see what the beach rocks look like when they are cut for jewelry.”

A yarn-spinning machine is on site, and customers can often find one of the owners spinning and weaving. “That’s one of the things that has been most appealing about the gallery,” Taibi said. “It is also my fiber studio. People get to see it happening. And we can look out at the view while we are doing it.”

The gallery is handicapped accessible and has chairs so customers can sit comfortably and watch whales and the spouting horns in Depoe Bay.

Raven Rocks Gallery is not the couple’s first business venture together, but it is a labor of love. The pair, who met in 2002 and said it was love at first sight, owned a gallery on Whidbey Island for about 15 years. “It was a great experience,” Taibi said. “Mary Jo built a large following. Her artwork is the primary drive for the gallery.”

Oxrieder and Taibi had been vacationing in Lincoln County for several years and speculated they would move to the area someday. “We started talking about maybe making the move to Oregon in 2020,” Oxrieder said. “We called a real estate person in Whidbey and said we were ready to sell in early February. That started the ball rolling. We started packing. Then COVID came, and there was no rolling it back up the hill. But things worked out for us.”

They bought a house on the coast and began looking for studio space to lease from Newport to Lincoln City. Taibi was driving through Depoe Bay and found the space for lease. Oxrieder and Taibi weren’t particularly looking in Depoe Bay but realized there wasn’t anything like their gallery there. “Then it struck us that maybe somebody really needs to break into this scene,” Taibi said.

The pair tackled most of the remodeling of the space themselves, including removing plywood paneling, wainscoting and slap board. “We disassembled it and there was a lot of lumber, but nothing we could use. We were able to donate it to people who needed those building supplies with lumber shortages and prices so high. It was a wonderful situation, and it got us into the community,” Taibi said. They still plan on adding spotlights and moveable panels to allow for more space to hang art.

As for the other artists in the gallery, the couple brought the artists that were with them in Whidbey who they thought would be a fit in their new gallery. “We always had artists that were unique to us. We want people to see things they haven’t seen before. That will be our thing here,” Oxrieder said.

The owners also support new artists who haven’t had work in a gallery before. “We are more than willing to coach people on how to frame and finish right from the beginning so they look professional. We are willing to share whether the artists are here or not. And we will have a month-long show for new artists for their portfolio,” Oxrieder said.

A large part of their success is not only due to their artistic talent, but the kind of energy they project. “We work at it. We stay out of worry and put positive things out there. That’s our method — be positive. We can stop the flow of traffic by worrying. That’s our secret,” Oxrieder said.

That positive thinking has gotten them exactly where they wanted to be. “We wanted an adventure. We needed things shaken up and a new location to shake up our inspiration. We are around the kind of good people we had on Whidbey. And we love it here — it’s beautiful and wild,” Taibi said.

Raven Rocks Gallery, 110 N Highway 101 #1B, is open Thursday through Monday from 11 a.m. to 4 p.m. Visit their website at ravenrocksgallery.com or follow them on Facebook for the latest updates.

The year in sports photos