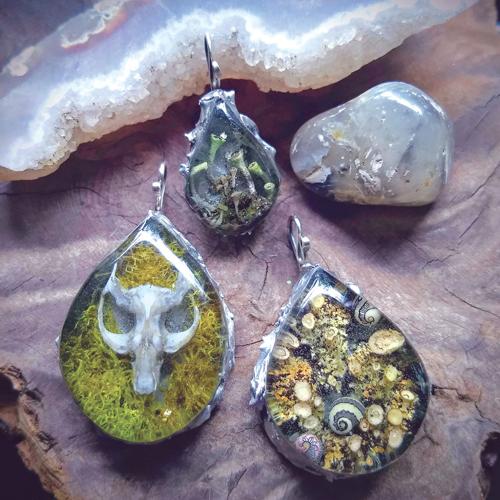 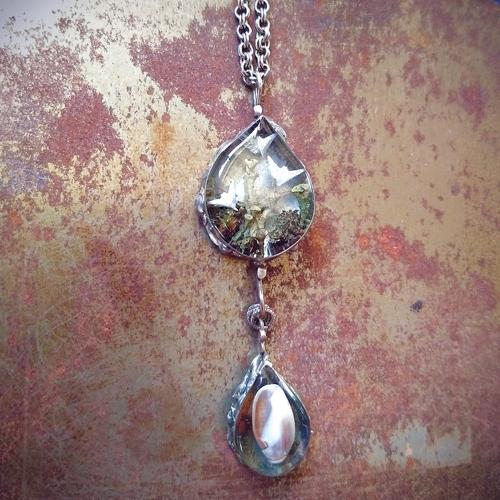 “My jewelry is filled with crazy little items,” said Nik, a jewelry maker who uses only one name. Those items range from tiny bones collected from owl pellets to lichen, from sea glass and agates to resin, from beetles to tiny shells.

“I’m looking to create a world within a world in my jewelry,” she said.

Nik, who was raised in Vancouver, Wash., said she frequently wandered in the woods during her childhood and was always interested in learning how to preserve the items she found in the undergrowth, in what she calls the hidden worlds along the forest floor.

“We were outdoors kids,” she said of her early years. “My dad worked for Fish and Wildlife, and most of our vacations were spent fishing or camping. And we were also pretty craftsy.

“I worked with jewelry for as long as I can remember,” she said, adding that she did intricate beadwork for years. Primarily self-taught, she lived in San Francisco for a time, and from 1994 to 1996 taught herself the time-consuming art of beading.

“I got obsessed with it,” she said. “Over the years, I was able to cobble together a little workshop, and I taught myself metalsmithing and took a class in it when I lived in Seattle. I wanted to know and understand the mechanics of metalsmithing tools, and what metal does under specific conditions.”

Nik’s jewelry line is called the House of Baba Yaga, which she describes as mostly a concept, not a particular image. Baba Yaga is a figure in Slavic folklore and appears in fairy tales as a witch. She is portrayed as a mythical wild and wise woman, but Nik does not view her negatively.

“I think of Baba Yaga — which translates to ‘ugly grandmother’ — as a spirit, an old crone, a wise woman, a sorceress,” she said. “She’s about listening to your instincts, making good charms for the community.”

Nik added, “Baba Yaga teaches many lessons, but the most prominent are to always look beneath the surface — things are not always what they seem — and to always listen to your intuition, always trust your inner voice.”

Nik’s family background is Ukrainian, and she recalled when she was very young, her mother would read her fairy tales — the older versions that were darker than what is common today. She cited the original “Little Mermaid” by Hans Christian Andersen as one such story.

Nik said she chose not to use her own name to represent her brand. “Nothing else but calling it Baba Yaga made as much sense for my jewelry,” she said.

She lived in Seattle for about 20 years and moved briefly to Guam, where she described the beachcombing opportunities as unbelievable. She has lived in Lincoln City for about six years, but is in the process of buying a house near Newport.

In years past, she made memorial pieces and charms, and early on made teas and herbal remedies. And if her plans to move to a new house materialize, she would like to get back to growing herbs. But these days she uses what she finds at the beach or in the woods to incorporate in her jewelry.

“Right now I’m having fun,” she said. “It’s like a compulsion for me to collect things on the beach — it’s obsessive.”

Among her frequent decorations these days is the Pixie Cup lichen or Cladonia asahinae. Her story bracelets are similar to a charm bracelet, but incorporate found objects. And she will occasionally make agate bracelets or beadwork cuffs, although both are time consuming.

She calls her earrings goddess hangers and witch hangers, the latter adorned with dangling feathers, sea glass and beads. They, along with found object pendants, can be found at Tah-Lume in Lincoln City and Femme Fatale Curiosities and Apothecary on the Newport Bayfront.

Nik also shows her jewelry at Oceanic Arts on the Bayfront and at Sticks and Stones in Florence.

On her website — houseofbabayaga.com — Nik says that each piece she creates is a meditation … “a chance to create a precious object that will have a life — a character — of its own.”

She added, “Personal adornment is an art form of realizing individual expression, as well as using ornament as personal amulet — charms that can evoke strength, courage, comfort, beauty, health, richness in life … anything the imagination wishes for.

“Some people give me items they find in the woods, but mostly I go to the beach and look for things to use,” she said.

“There are always new things to try,” Nik concluded. “It would be nice to make a full living from my jewelry, but it’s more important to me to just make good things.”