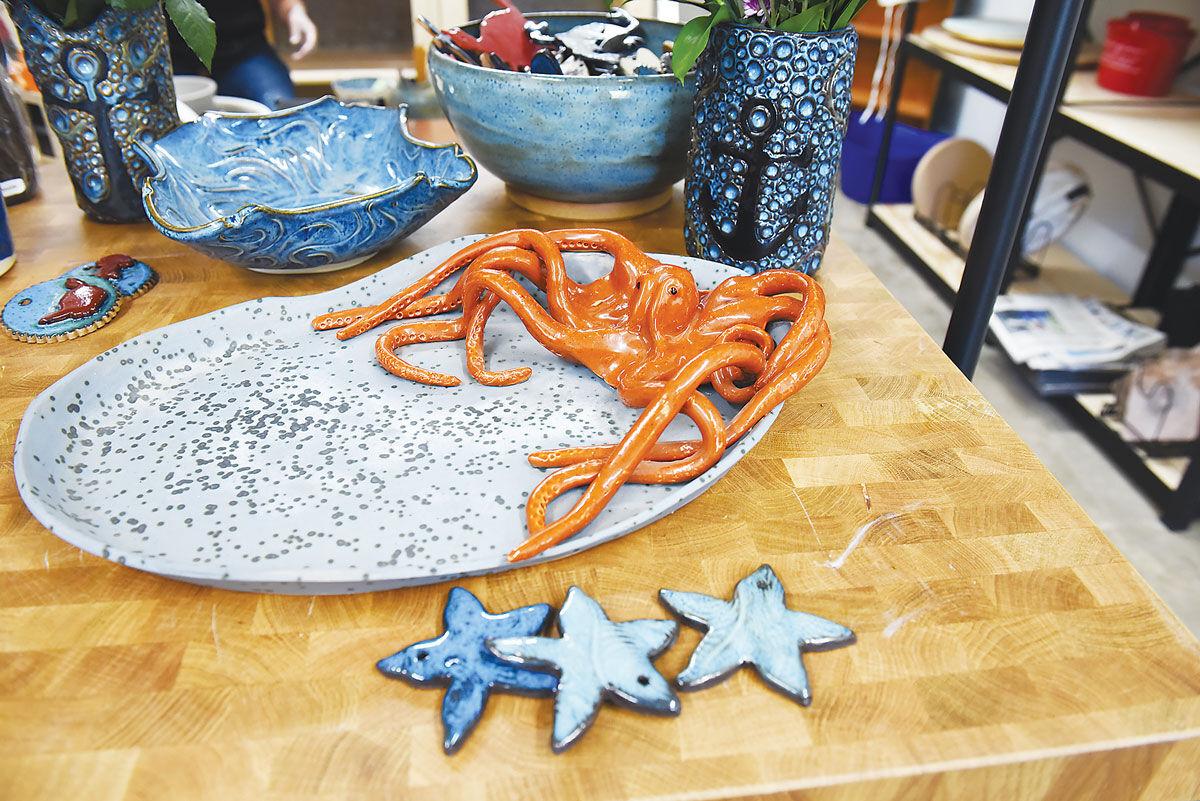 Much of Taunette Dixon’s pottery has a nautical theme — not surprising, as both she and her husband are fourth generation fishermen. 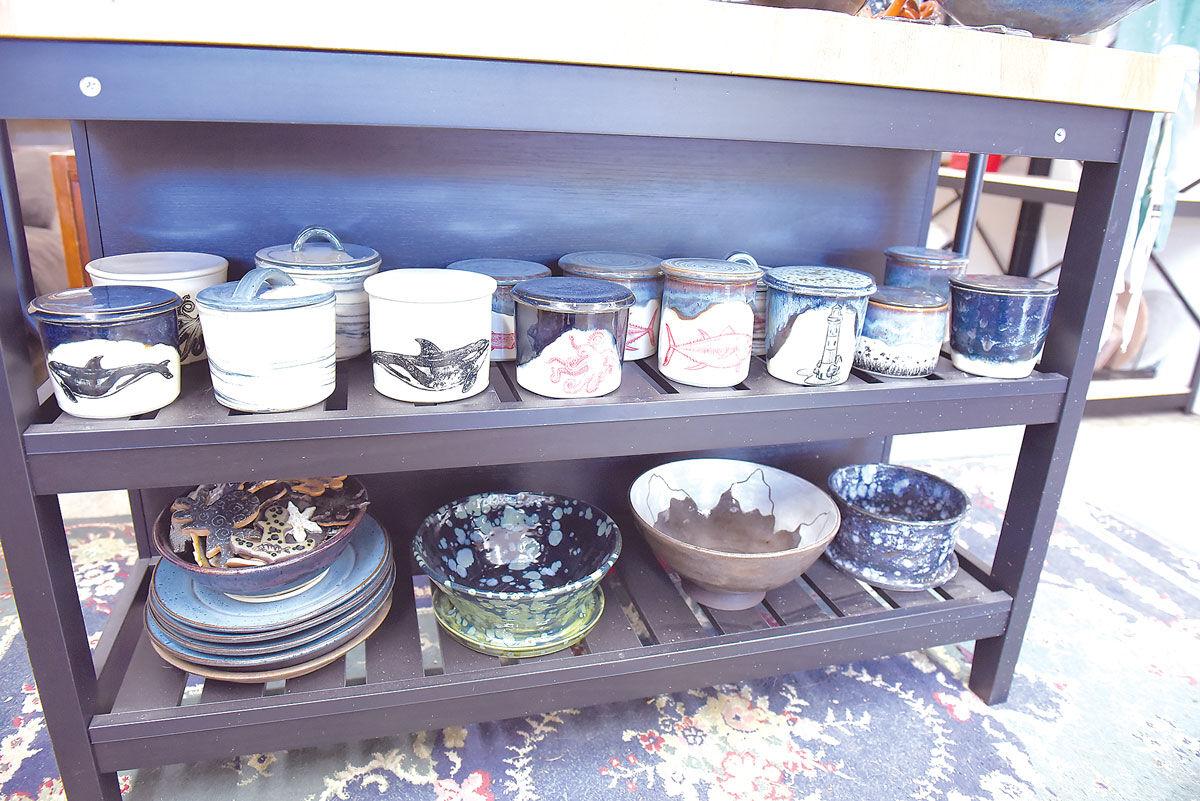 These lidded crocks (top shelf) made by Taunette Dixon will be filled with gel candle wax. She is working in conjunction with Jody Malloy at Newport Bay Candle Company to create the crocks, which will be refillable when the wax is used up. 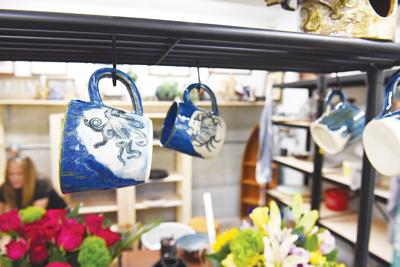 Taunette Dixon of Newport turns a bowl at the pottery wheel in her studio. She began creating pottery as a hobby, but it has expanded into a profession for her, one she feels she was fated to find. (Photos by Steve Card)

Much of Taunette Dixon’s pottery has a nautical theme — not surprising, as both she and her husband are fourth generation fishermen.

These lidded crocks (top shelf) made by Taunette Dixon will be filled with gel candle wax. She is working in conjunction with Jody Malloy at Newport Bay Candle Company to create the crocks, which will be refillable when the wax is used up.

With a natural penchant toward nautical themes and the colors of the ocean, Taunette Dixon has followed her passion for the pottery wheel to transform her hobby into a profession. And her pottery has been so successful that she sells out as fast as she can create.

“That’s a nice surprise,” she said. “Summer and holidays are super busy.”

Dixon did not expect that to happen. “I took this on as a hobby four or five years ago and became a little obsessed with it,” she said. “Now it’s become a career.” And that’s in addition to working with her husband, Kevin, and their commercial fishing vessel, the F/V Tauny Ann.

Dixon sees her pottery venture as a gift of fate. “I come from a family of artists, but I couldn’t find my medium,” she said. Then she took hand-building pottery classes at the former Toledo Clayworks and found her niche.

“But I never tried throwing on the wheel,” she said. When a very close friend was diagnosed with a terminal illness, Dixon went to Eugene to be near her and stayed at Daniels Pottery, an Air B&B that was attached to a commercial pottery studio.

“The man who owned the studio was a pottery teacher and ran a gallery. He started giving me private lessons on the wheel and gave me access 24/7 to the studio,” she recalled. “I became obsessed. It was really healing — it soothed me.”

When she returned home, she took more classes at Toledo Clayworks and now feels part of the pottery community at the coast. “There’s a lot of learning involved in pottery, and people have helped me with it all,” she said.

The COVID-19 pandemic changed much of that, and led Toledo Clayworks to close up shop. To continue learning, Dixon started taking lessons via YouTube.

Dixon calls Chasse Davidson, who owned Toledo Clayworks, a “great teacher and phenomenal artist.” She also cites Martha Wallace as one of the Toledo Clayworks instructors who got her started in pottery, first with hand-building and then with the wheel.

“Hand-building was a great way to start, and it teaches the basics,” she said. “But learning how to create a vessel on the wheel is difficult.”

Dixon makes a variety of items, from mugs to lidded jars, bowls to teapots, and planters with attached bottoms. While she makes what she knows will sell, she also tries to create something different in each kiln load. “That’s part of the fun,” she said.

And coming from four generations of fishing families — she was raised in Newport and Dutch Harbor, Alaska — it’s no surprise that Dixon’s pottery often bears a nautical theme or the colors of the ocean.

“I’ve also learned how to make my own glazes, mixing commercial glazes with my own,” she said. “I find myself attracted to marine-ish glazes and designs. I might make something with an octopus attached, and a lot of my cups have a crab or anchor or other marine animal on them. And I do a lot of blue glazes, although I also am attracted to red and black.”

Lately she has been working with colored clay — swirling color into the clay while working with it, and then putting a clear glaze on top.

Dixon said she likes creating functional ware. “I like people to get to drink coffee every day out of a cup that I’ve made,” she said. “I love the idea of people enjoying my pottery and using it.”

Reflecting on pottery’s role in ancient Greece, she said she’s impressed with how long pottery lasts and how sturdy it is. “It’s so ancient,” she said.

Dixon first made her pottery in a spare bedroom and put her kiln in the garage. Now, she rents the bottom floor of her daughter’s house across the street from her own, and has ample room for her kilns and studio. An added plus — “I get to see my grandson every day,” she said.

She noted her many years of involvement with the Newport Fishermen’s Wives have given her contacts that contribute to her pottery’s success. She remains involved with the Fishermen’s Wives, serving on its board and as spokesperson for the group.

With her husband away fishing for much of their children’s growing up years, Dixon said she was busy “being a mother,” with no time to pursue pottery. Now that her children are grown, she has the time to devote to her love of pottery.

“This isn’t a cheap profession to start out with — it takes a lot of equipment, and without a studio to go to, you have to have a kiln and wheel — and my husband has been super supportive,” she said, adding he would like to see her expand to more farmers markets and craft shows.

Meanwhile, Dixon is devoted to her craft. “I try to touch clay every day,” she said. “I may still be throwing pots at 3 a.m. I lose track of time when I throw. When I do something, I do it big.”

Dixon said she has extra pottery wheels in her studio, and is open to helping her friends get into the medium. “I love sharing it with my friends,” she said. “It’s a tough medium to learn on your own. I’ve had four great teachers, and I was lucky I got those lessons before COVID hit.”

“Certain media call to certain people, and I feel like this one called to me,” Dixon said. “It all fell into place, as if it was supposed to happen. I’m content.”

Dixon sells her pottery through Wind Drift Gallery – Childish Tendencies on the Newport Bayfront. She also makes candle containers for Newport Bay Candle Co., in Newport. And she will participate in her second local vintage and artisans’ market Friday, Aug. 20, from noon to 8 p.m., and Saturday, Aug. 21 from 10 a.m. to 6 p.m. at 50 SE South Forty Lane in Depoe Bay. Taking part with Dixon will be Amber Taunton with repurposed furniture, plants and vintage and handmade items; Kim Postlewaite of Gearhart with vintage items and painted furniture; Betty Wilson of Siletz with vintage linens, painted furniture, custom towels and pillows; and Becca Bostwick of Newport, with handmade items and candles.