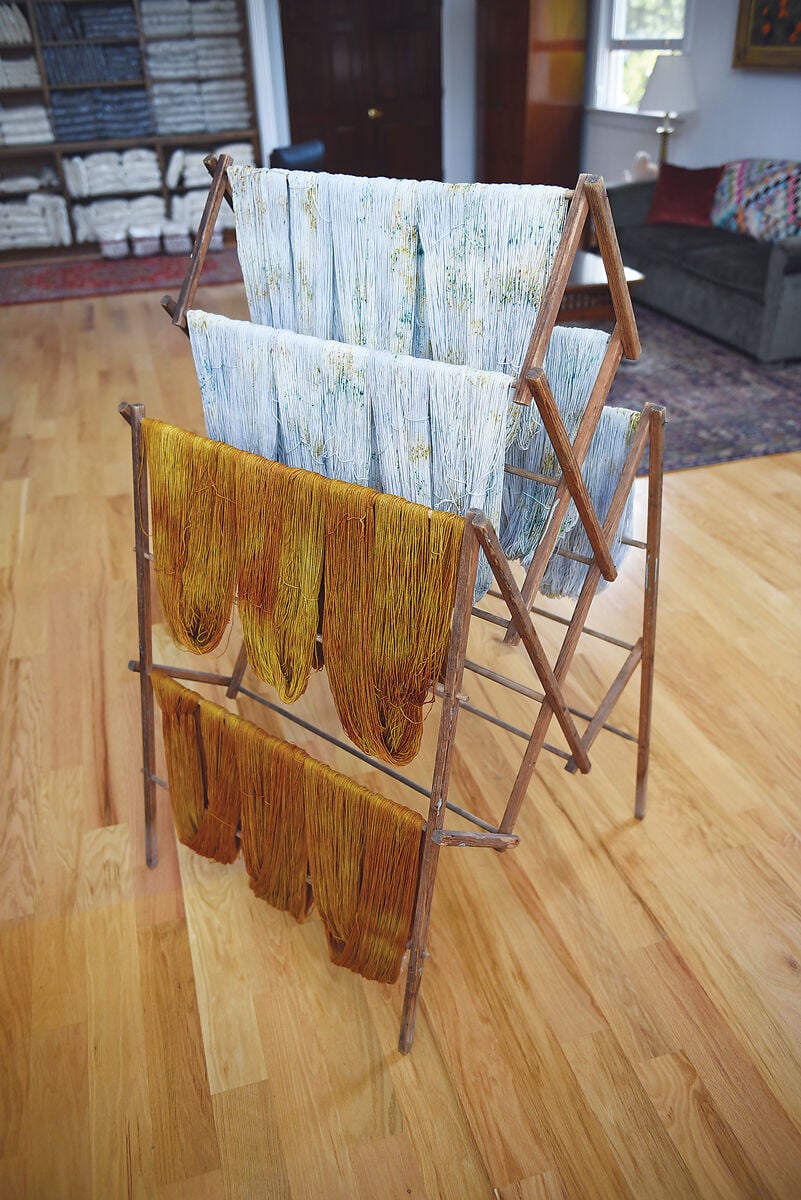 Yarn dries on a rack at Sarah Murray’s new wool dyeing studio in the historic Old Church in Toledo. 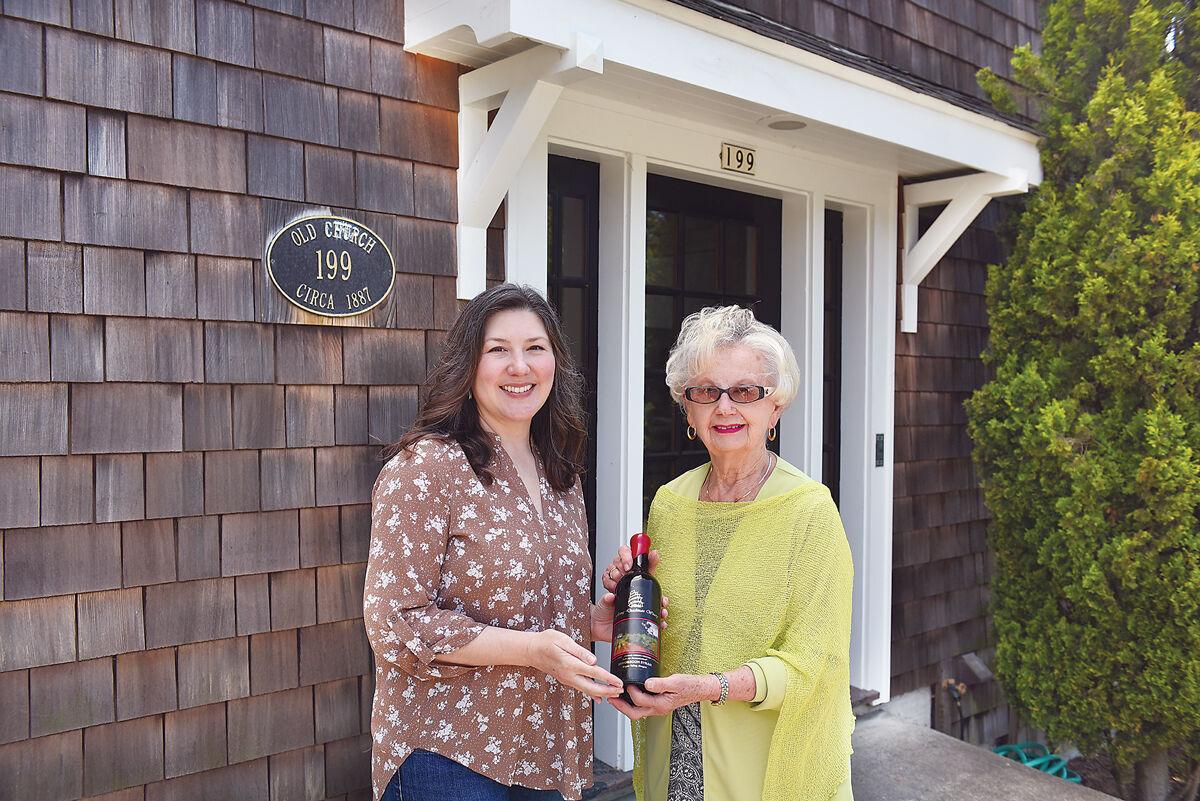 Judy Gibbons, right, presents Sarah Murray with a bottle of wine from Flying Dutchman Winery. Its label bears the image of a Michael Gibbons’ painting titled “Vineyard Landscape,” part of an Artists’ Series Label for a five-year aged 2008 Vintners Select Syrah. The wine was a welcoming gift to Murray, who recently purchased the Old Church Studio, where Michael painted for many years.

Sarah Murray displays finished yarn she has hand dyed. Earlier this month she purchased the Old Church Studio in the Toledo Art District for her dyeing studio. The late artist Michael Gibbons refurbished the building and used it as his painting studio for many years. Murray operates Murray & Co., Wool Goods. (Photos by Steve Card)

The legacy of the late Michael Gibbons continues in the Toledo Arts District that he and his wife established, with the purchase by Murray & Co., Wool Goods of the Old Church Studio.

Toledo native Sarah Murray, owner of Murray & Co., purchased the studio June 1. She will use the main floor of the former United Methodist Church, built in 1887, as her wool-dyeing studio; her husband, Ken, information technology manager for the Central Lincoln People’s Utility District in Newport, plans to use the basement for his leatherwork hobby.

Sarah Murray started out dyeing wool in her Toledo kitchen, moved her workspace to the basement for more room, and finally expanded to a shed her husband built in their backyard. The Old Church will give her even more space to pursue her craft — hand dyeing wool for knitting and crocheting.

Originally from Toledo, Murray’s family moved away when she was growing up, but returned summers for visits. They eventually settled down in Toledo, where she graduated from Toledo High School.

Murray moved many times for her husband’s career as a Navy pilot, but 16 years ago, they settled in Toledo to be close to family.

“I started college with a focus in art, my love being pencil drawing, especially portraits,” Murray said. “Right after we got married, Ken was commissioned as an officer in the Navy, and we moved to Pensacola, Fla., for flight school. My dream was always to be a mother, so I put my focus on having a family.” They now have two daughters in college.

While home schooling her daughters, Murray continued her interest in art, whether drawing, quilting or knitting. “After becoming a mom I fell in love with fiber arts,” she said. Mostly self taught, she said her grandmother taught her to knit when she was in third grade.

“I grew up with a crafty mom and grandma who were always making us quilts or knitting us blankets and slippers,” she recalled. “I love making functional and cozy art that my loved ones can enjoy. Now I knit every day. It’s really relaxing for me.”

When Murray decided to design her own colors for her knitting projects, she learned to hand dye wool. She does not spin her own yarn other than as a hobby, but instead buys her yarn ready to be dyed.

Most of Murray’s business is mail order from her website and is a striking example of the power of social media. She started posting on Instagram in 2012 as a way to connect her quilting with others in the creative community. “I got a bit of a following there,” she said. “Then I started dyeing yarn and shared what I was doing on Instagram, and people saw it and asked if they could buy the yarn. Now I have customers all around the world who found me on Instagram — I feel like I’ve gotten to know people that way.”

She also sells her yarn at the Knotty Lamb yarn shop in Forest Grove, where she holds occasional quilt shows.

And with the purchase of the Old Church, she will be able to meet knitters and crocheters in person in her studio, filled with skeins of wool dyed in myriad colors.

“It will be nice for local knitters and crocheters to have a local yarn shop and to be able to shop locally,” she said. ”Being able to see and touch the wool is so nice when you’re trying to picture what you plan to make. You want to squish and smell the wool.”

Her process in dyeing is straightforward. She orders wool from wholesalers — “I source out ethically raised sheep,” she said, noting some are American, others are South American wool suppliers — and starts with bare, undyed skeins of yarn, then pre-soaks the yarn in water to prepare it to accept the dye. The wet skein is placed in a pan with water and citric acid or vinegar, and the dye is applied. The mixture is then cooked, and the acid and heat bond the dye to the wool fibers. When the dye is set, the wool is cooled, then washed and hung to dry.

“Some skeins go through many layers of dye to get the colors I want, and it can take hours,” Murray explained. “I purchase dyes like a painter would purchase paint colors. And then I mix them.“

From start to finish, the dyeing process takes a couple of days.

Murray said the studio will be open to the public on “open studio” days, a time when local knitters and crocheters can visit and shop. She may also offer workshops. But both of those are for the future. Right now she is still working on setting up the studio and getting used to its immense space.

“This is going to be fun. Michael Gibbons is a lot to live up to,” she said, reflecting on working in the late artist’s longtime studio. “I’ve known Michael and Judy for so many years, and I appreciate not only his art but what he’s done for the neighborhood and other artists.

“Michael was a fixture in the neighborhood,” she added, noting she lives around the corner from Gibbons’ home and gallery and would often stop to chat while taking her dog for a walk. “It’s bittersweet — we really miss him, but we’re also thankful for the opportunity to create in the studio that he made.”

Judy Gibbons is equally pleased with the sale of the Old Church to a practicing artisan. “All of us in the Toledo Arts District welcome Sarah, and I personally am particularly delighted to have artisan activity in the Old Church Studio,” she said. Michael and Judy Gibbons purchased the Old Church in 1992, and Michael moved his studio there the following year. A News-Times article from March 1993 noted that the purchase was part of the couple’s plan to develop the neighborhood as an arts district, one block above Main Street.

Judy Gibbons explained that she and Michael had applied to the Oregon Department of Transportation sign division for signage on Highway 20 for their studio and gallery in the Episcopal Vicarage on Northeast Alder Street. In the course of taking mandated photography of the road on Northeast First Street from Business Highway 20, state officials visited several times to check out their request. They were “totally surprised,” she said, when they received a sign for the fledgling Arts District, which now runs from Northeast Alder Street off Business 20 to the Elks Lodge.

Reflecting at that time on his plans to renovate the historic buildings on Northeast Alder Street, Gibbons told this reporter, “My feeling — and I’ve felt this way for years — is that the growth of Oregon, or of any culture, requires an influx of artists, people who have traditionally settled in places that are not very expensive. Toledo is a natural … you do not have to put a gallery in a place with high foot traffic. You just have to concentrate quality of art in one area, so that people who are interested in it will want to come see it.”

“Now another form of art will happen here,” Judy Gibbons said of Murray’s wool dyeing. “I am thrilled and delighted. It is with pleasure that I welcome Murray Wool to the Toledo Arts District.”