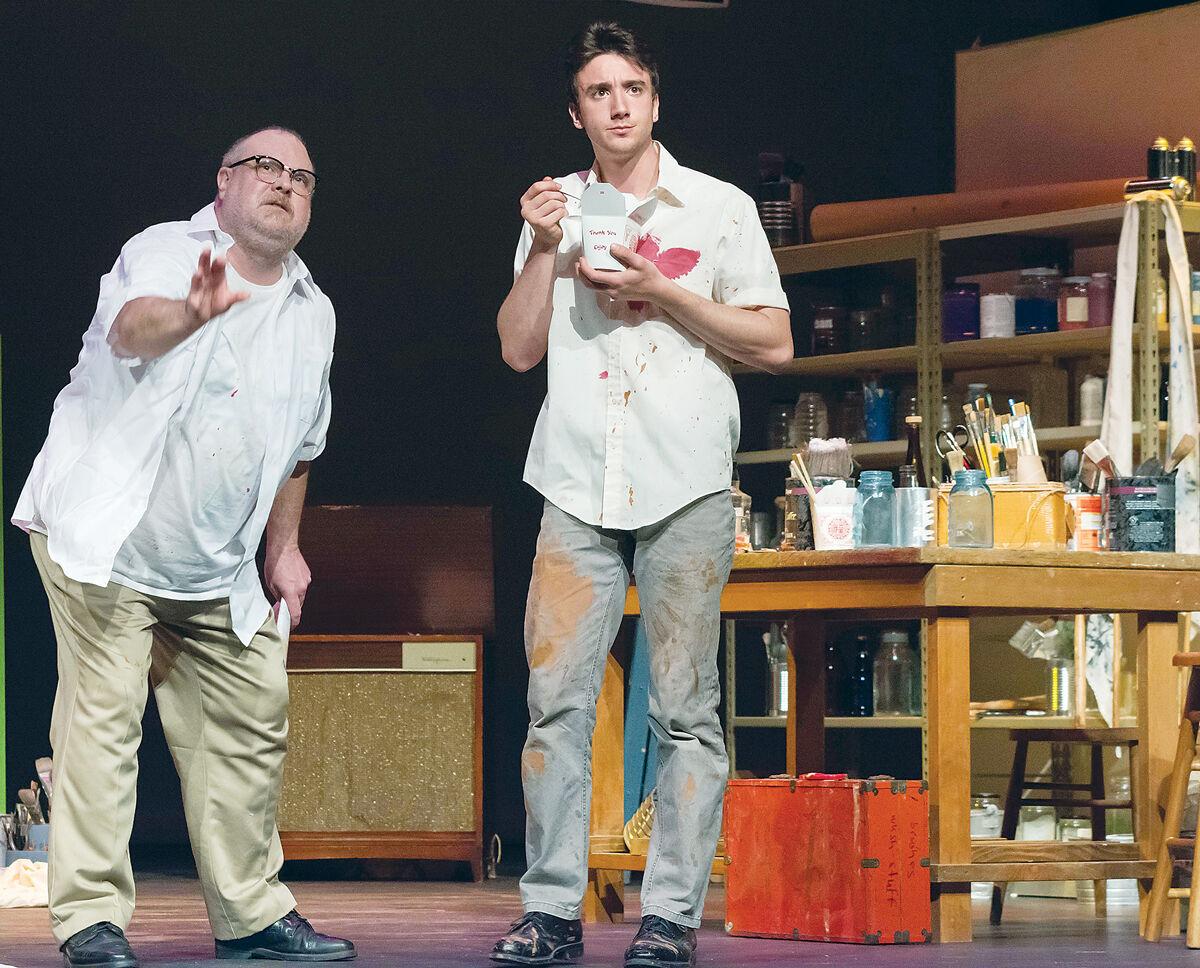 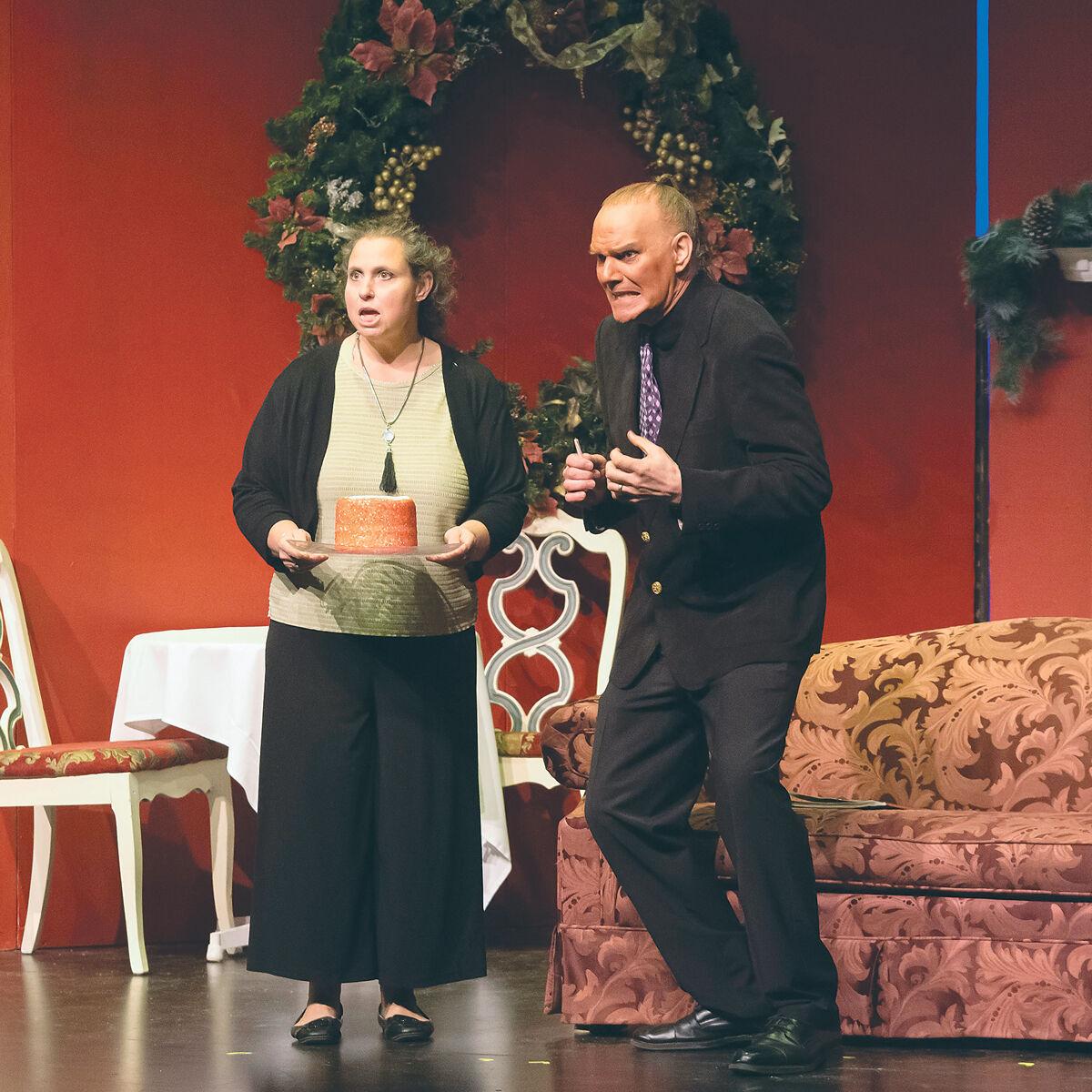 CJ McCarty and Pete Theodore appear in a previous version of “The Christmas Show,” by Red Octopus Theatre Company. Red Octopus actors will be back on stage with the Lutz Radio Theatre Christmas Show at the Newport Performing Arts Center on Dec. 17 and 18.

CJ McCarty and Pete Theodore appear in a previous version of “The Christmas Show,” by Red Octopus Theatre Company. Red Octopus actors will be back on stage with the Lutz Radio Theatre Christmas Show at the Newport Performing Arts Center on Dec. 17 and 18.

Local stages have been dark for many long months since the pandemic struck, but the lights are beginning to go on for Newport and Lincoln City theater companies. With efforts in place to address social distancing and mask and vaccination mandates, audiences are starting to return. We contacted local theater companies to talk about their plans.

Founded by local actors Marc Maislen and Mary Eastman, New Visions Arts was in the midst of readying a play for the stage when the pandemic shutdowns occurred. At the time, Maislen emphasized that the quarantine kept the players separated from each other, just the opposite of the theater process.

“I’ve met with (Oregon Coast Council for the Arts executive director) Jason Holland to discuss the role of the performing arts center regarding mandates, and there’s a lot of safety in place,” he said. “I think the audiences will return, just not as robustly. The longer that user groups wait, the harder it is to bring audiences back, and people are really interested in getting back to live theater. Costs have not gone down — on royalties, Newport Performing Arts Center (PAC) rental, printing, etc., — and those costs have to be considered when a company may not get more than 32 in the audience.”

Maislen said he is willing to go back into production, but cautioned, “It takes a while to get back up to speed. After a big, long break, it’s not easy.”

Maislen has two plays in mind for the coming season, and he is committed to avoiding heavy, serious dramas for at least the first year. He is looking at “Sex, Drugs and Rock & Roll” and “Heisenberg,” one in spring, one in fall, although the order could be reversed depending on which theater — the larger Alice Silverman or the smaller black box — would be used.

“Coming out of the pandemic, I want to get people to laugh in the theater,” he said. “And with “Sex, Drugs and Rock & Roll,” he said the audience will laugh a lot.

“Barring something unforeseen, we’ll have a season,” he said. “I’m not prepared to do a musical this year — we need more time, and it’s very expensive to produce. But I hope this will be a robust season, starting in March and going into May.

“Community theater people are eager to get back on stage,” he added. “Two years away is a very long time.”

Throughout the pandemic, members of Red Octopus Theatre Company have been meeting to discuss whether to produce a play, and if so, what it would be. “Everyone misses being on stage,” said board member Darcy Hogan Lawrence. “The interesting thing was when we had a meeting about doing our Christmas show, we all said we lacked the energy to do it but felt like the community needed it. So we decided it was time to come back to the PAC, and once we agreed to do that, our energy started to come back too. Now we’re back doing what we love and what we know.”

To return to the stage, Red Octopus will be reprising “the Lutz Radio Theatre Christmas Show (of 1947),” which it performed in 2019. Lawrence did that show almost 20 years ago in Orange County, Calif., and secured the rights to her own version, which she said local audiences loved. “We decided it would simplify things if we didn’t do a new show,” she said. “Instead, we decided to go back to the last moment things were good.”

All but one of the 2019 cast is returning for this year’s production, which will be live on the Alice Silverman Theatre stage Dec. 17 and 18. Cody Larsen is director once again.

As it has before, Red Octopus will be giving the audience cocoa and Christmas cookies homemade by Kate Boyes, but instead of serving them at intermission, the treats will be distributed as people go home. Santa will also pay a visit.

Lawrence said the Red Octopus board decided unanimously that 100 percent of proceeds from the play will go to OCCA’s capital campaign. In addition, OCCA will host a silent auction on both evenings of the play.

For the new season, the plan was to stage “I Hate Hamlet” in the spring and “Alice’s Adventures in Wonderland” — already postponed several times— in the fall, but Lawrence said they have lost many of its cast members and will have to start over. “To do a show, you have to start months in advance, and at this point, everything is up in the air,” she said. “If we can do theater in 2022, we’ll probably do something. We just don’t know yet what it will be, but theater and art will find a way. We want to do this for the community.”

Lawrence said none of the PAC’s COVID protocols are impacting Red Octopus plans in a measurable way. PAC requirements include masking and proof of vaccination or a negative PCR test. In addition, Red Octopus has opted to add a “buffer” (empty) seat in between parties in the audience. “This is just an additional safety measure. We want folks to feel as comfortable as possible about coming out to the PAC to celebrate with us,” Lawrence said, noting the entire “Lutz Radio” cast is fully vaccinated.

Porthole Players board secretary Robin Wedertz said the company is entering the planning stage for future productions but in the interim is supporting groups returning to the stage. She cited the extra cost of cleaning the theater as one thing contributing to Porthole’s decision to hold off on its own performances.

“We have great stuff in the works, with larger casts and kids performing on stage, and we know everyone will be safe and have fun,” she said. “We’re trying to walk a precarious tightrope, and are choosing not to come back right now, but will stay involved as a community.

“People want us back, and we can’t wait to come back big, with music, kids on stage, family and fun, laughter and a packed auditorium,” Wedertz said. “That would be the dream.”

Youth theater company Coastal Act Productions (CAP) is gearing up for its winter play, the Disney version of “Tarzan.” Director Jody Hanna said the first rehearsal took place Nov. 20. Performances are slated for Fridays and Saturdays, Feb. 25 and 26 and March 4, 5, 11 and 12 on the Alice Silverman stage.

CAP also held its usual two-week theater camp last summer, resulting in three days of performances of “James and the Giant Peach.” Offering one play plus theater camp is a typical season for CAP.

“The kids are so excited to be back on stage, and so are their parents,” Hanna said. “People are wanting to be involved in the community again.”

CAP productions usually have about 65 participants. Age eligibility begins at 8 years old or second grade; Hanna said people in their 70s will act in “Tarzan” as well. Adults are invited to volunteer regardless of whether their child is involved.

Hanna expects “Tarzan” performances will be general seating, meaning people can choose where to sit. “We want people to be able to have seating at their comfort level,” she said.

“I’m really excited to be back on stage,” she said. “We went back and forth about the winter show, but it’s finally happening, and it’s great to be doing what we love and being part of the community we love.”

She said she had been thinking about “Tarzan” for a couple of years, and chose it specifically to come out of COVID. It has fewer costume changes than many plays, allowing better control of social distancing.

“I can’t wait,” she said of the upcoming production. “I feel really relieved to be able to do something normal again.”

OCCA director Holland said it’s up to the individual theater companies whether to use spaced seating. “We’re not under any current mandates for reduced seating,” he said. What’s non-negotiable are mask wearing and proof of vaccination or a negative PCR test.

He is pleased with how the protocols are working. After the Oregon Coast Jazz Party, OCCA asked patrons and volunteers to rate the protocols on a scale of one (lowest) to five, and achieved a 4.9.

“We do more than the minimum requirements to keep people safe, and we do more than best practices,” Holland said. He noted that masks are required in all city of Newport buildings.

Holland said construction planned for the PAC is expected to start in the spring but should not interfere with any performances — with most of it behind the scenes. It won’t affect the Silverman or the studio theaters, nor will it impact the lobby, he said, adding, “I don’t anticipate any interruption of our schedule.

“People are still deciding about whether to come back, and some are not comfortable yet,” he acknowledged. “We’re excited to have the companies come back when they’re ready. And when they are comfortable, we’ll be here.”