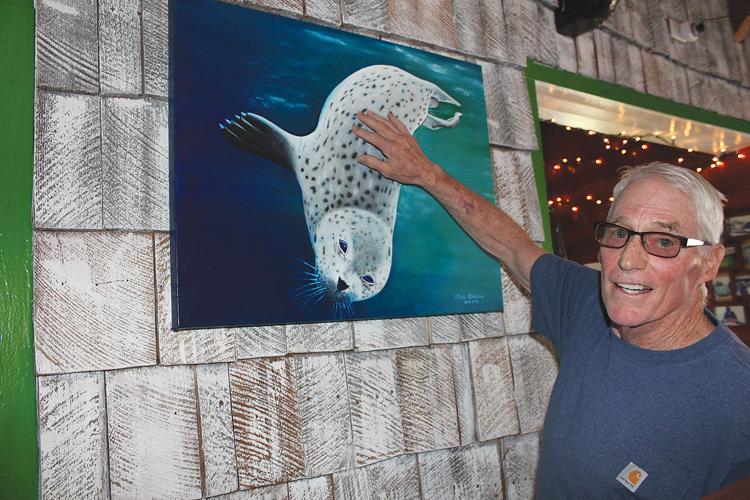 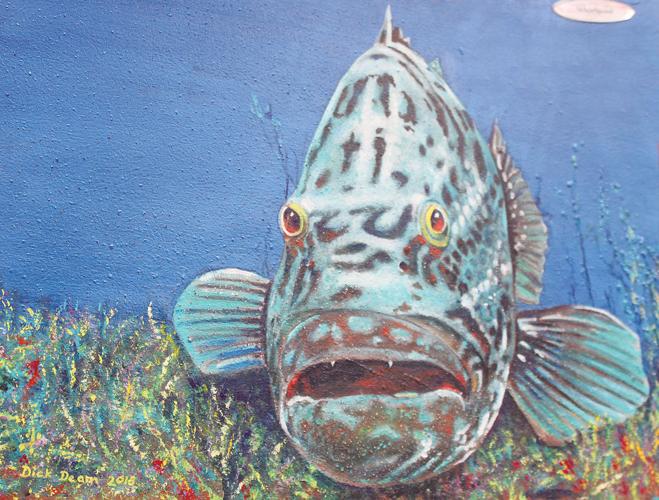 Local marine wildlife is a subject matter for Waldport artist Dick Deem. Several of his paintings are currently on display and for sale at Luna Sea Fish House in Seal Rock. 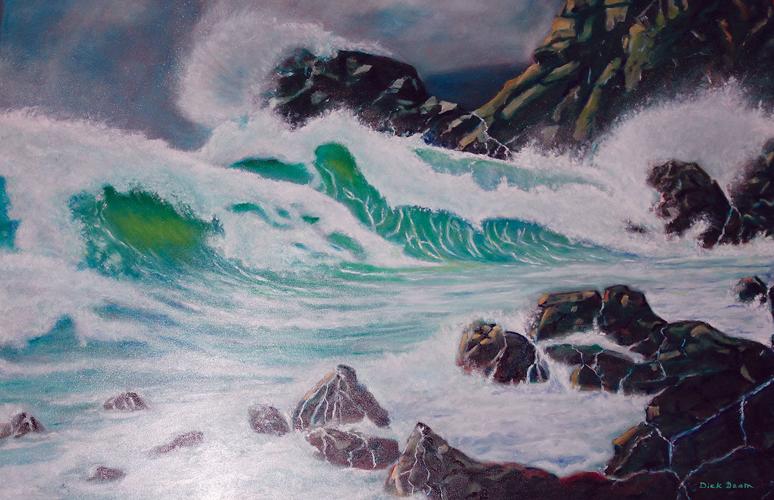 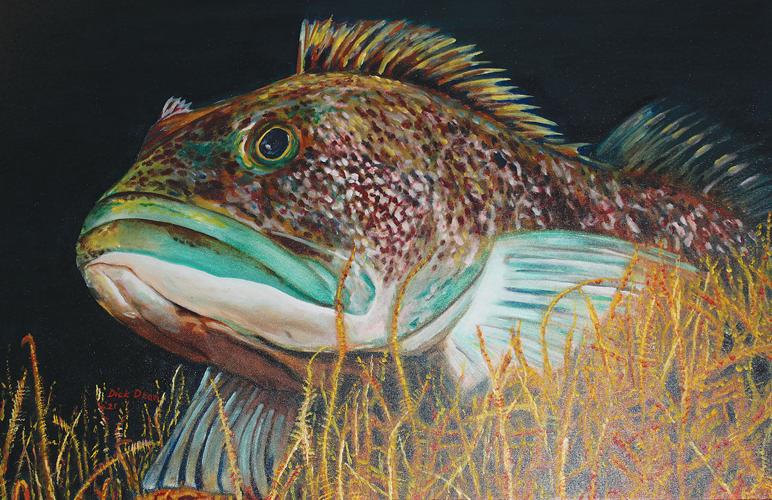 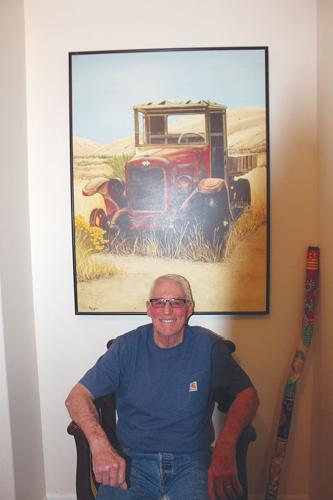 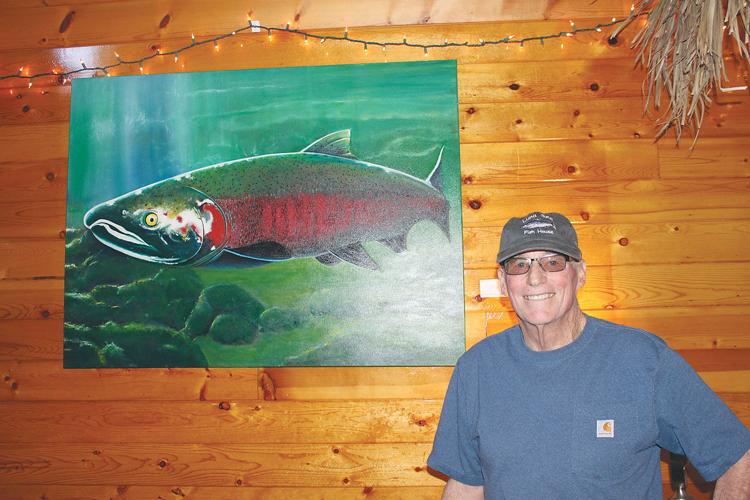 Local marine wildlife is a subject matter for Waldport artist Dick Deem. Several of his paintings are currently on display and for sale at Luna Sea Fish House in Seal Rock.

A local artist turned his passion for old cars and trucks into a creative endeavor that has lasted decades.

Dick Deam, of Waldport, said his interest in painting began in grade school when a visiting Disney illustrator gave classes. It was then he learned the fundamentals of art such as line, color, value, shape, form, space and texture. But Deam may have been born with some natural talent. His father was a gifted custom car body and paint man who could mix paint colors by eye.

After taking some art classes in college, Deam left school after he was drafted in 1968.

“I got a job offer in writing from President Johnson,” he said. “I couldn’t refuse it.”

Though he painted a mural in his barracks, his art took a backseat while he served in the military. After he left the Army, Deam moved to Colorado in 1974 where he met his wife, Judy who is also an artist.

The couple traveled the country while living in a vintage ‘50 Chevy truck with a handmade camper shell.

“I learned quickly that if you live in a truck, it is really hard to get a job,” he said.

Deam worked for his uncle in southern California a gas station in his hometown. Then a regular customer offered him a job as a vintage car salesman, a job that cemented his love of old vehicles.

“I was just a veteran that loved cars and that shined through,” he said.

When Deam saw a painting of an old car in a junkyard, he was inspired to create his own vintage car painting. Those car and truck paintings proved to be quite popular. “I had quite a following in Sandpoint, (Idaho) and it was just a small town,” said Deam.

Cars and trucks were his main themes until the couple moved to Mexico for four years. That type of subject matter wasn’t popular there, so Deam switched to something that was — sea life.

“I painted a durado on the only canvas I had and someone bought it right away,” he said. He knew he was onto something.

Unable to find proper canvases in Mexico, Deam was able to secure old, rusty refrigerator and freezer doors to use as his canvas. Even though some of the metal had rotted from rust, Deam incorporated those holes into the design so it looked like the holes were in rocks.

“We had a pretty good run of people buying stuff,” Deam said. He painted and sold nearly about 20 of the sea life on metal paintings before he and his wife moved to Lincoln County where he continues to paint marine life local to the area.

Deam uses oil paint which allows him freedom to blend colors and easily re-do an area he isn’t pleased with. When he starts a painting, he usually sketches out a complete and detailed pencil drawing on canvas then starts by painting the background. He works on the details after that. He calls his style “photo realism” and often works off a photo. Sometimes, people will look at his car paintings and think they are actually photos.

“But you can see it’s painted,” he said. “You can see the brush strokes and hairs stuck in there.”

Though he calls himself undisciplined and unapologetic, Deam said he simply paints what he loves. But there have been a few times when he didn’t love what he painted. A while back, he and Judy both agreed they didn’t like one of his car paintings. “I took a butcher knife and slashed it. Then she got a piece of paper and drew an ear on it, taped it up and called me Van Gogh. We threw that one away.”

The Deam’s have a booth Little Joe’s General Store in Waldport where they offer antiques and driftwood sculptures they make called “Fish Sticks.” Several of his paintings are hanging in the Luna Sea of Seal Rock restaurant which is about as big of commitment he is willing to have right now.

“I’m not interested in joining a co-op or a gallery now because you gotta work and I’ve got enough to do keeping this place up and going to the beach,” he said. “I’m not driven myself … I’m really not. I know I have some talent but Judy is driven. I’m painting fish because someone bought a fish. I painted cars because I love cars. And I’m still painting fish and I’m still painting cars. I am motivated by where I live now and painting the kinds of fish that are here. I’m just having fun at my age doing this and it’s rewarding.”

Deam does take on commission work.