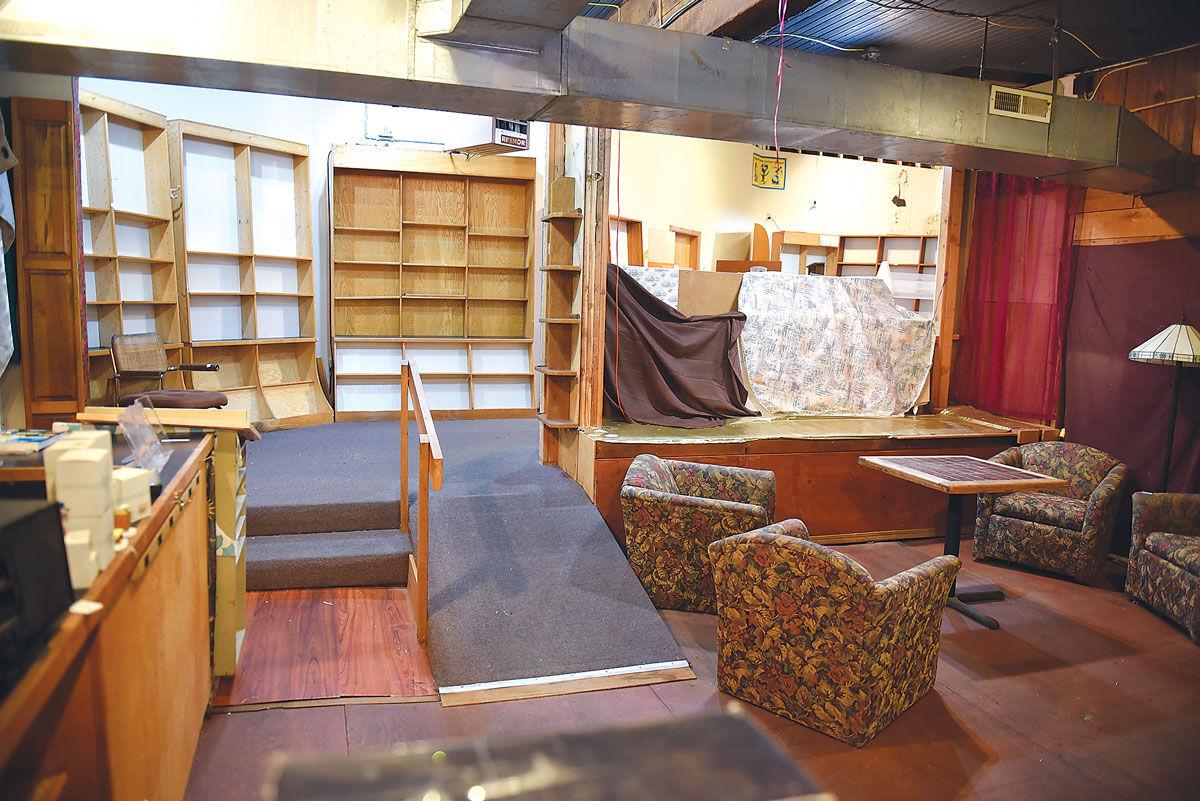 The shelves at Canyon Way have been emptied of books as the owners sell off the remaining inventory in preparation for retirement. 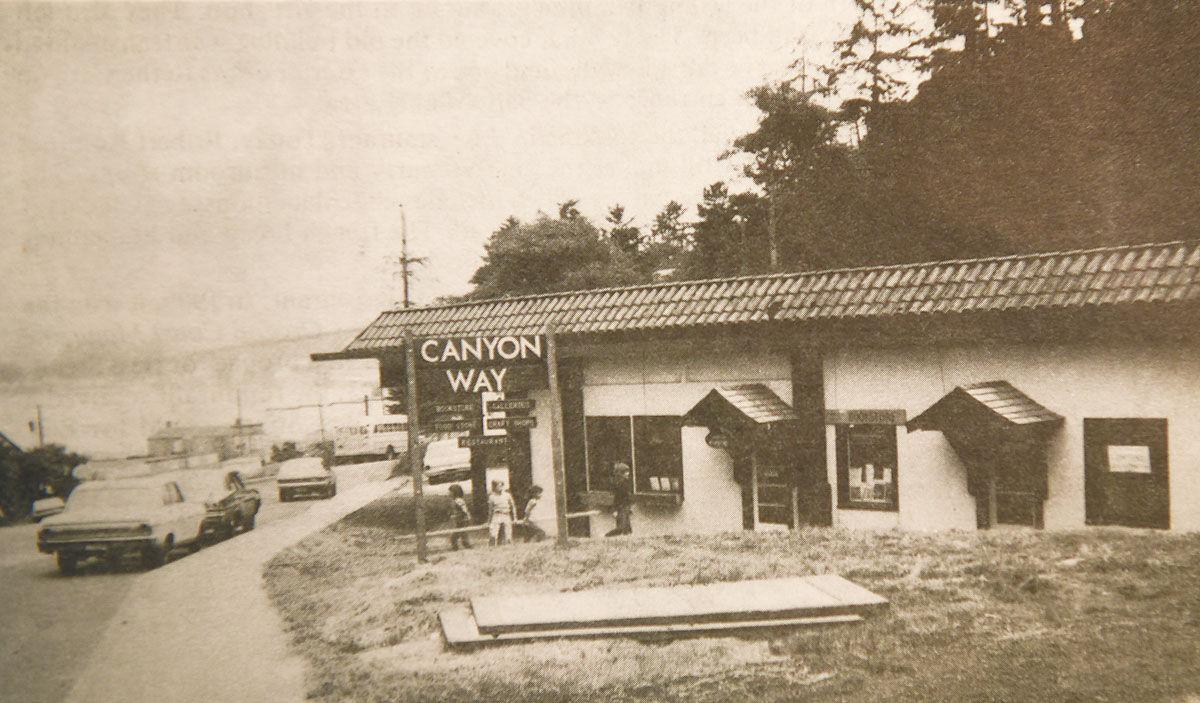 This photo from 1974 was taken during the remodeling of Canyon Way as it readied to open a restaurant. 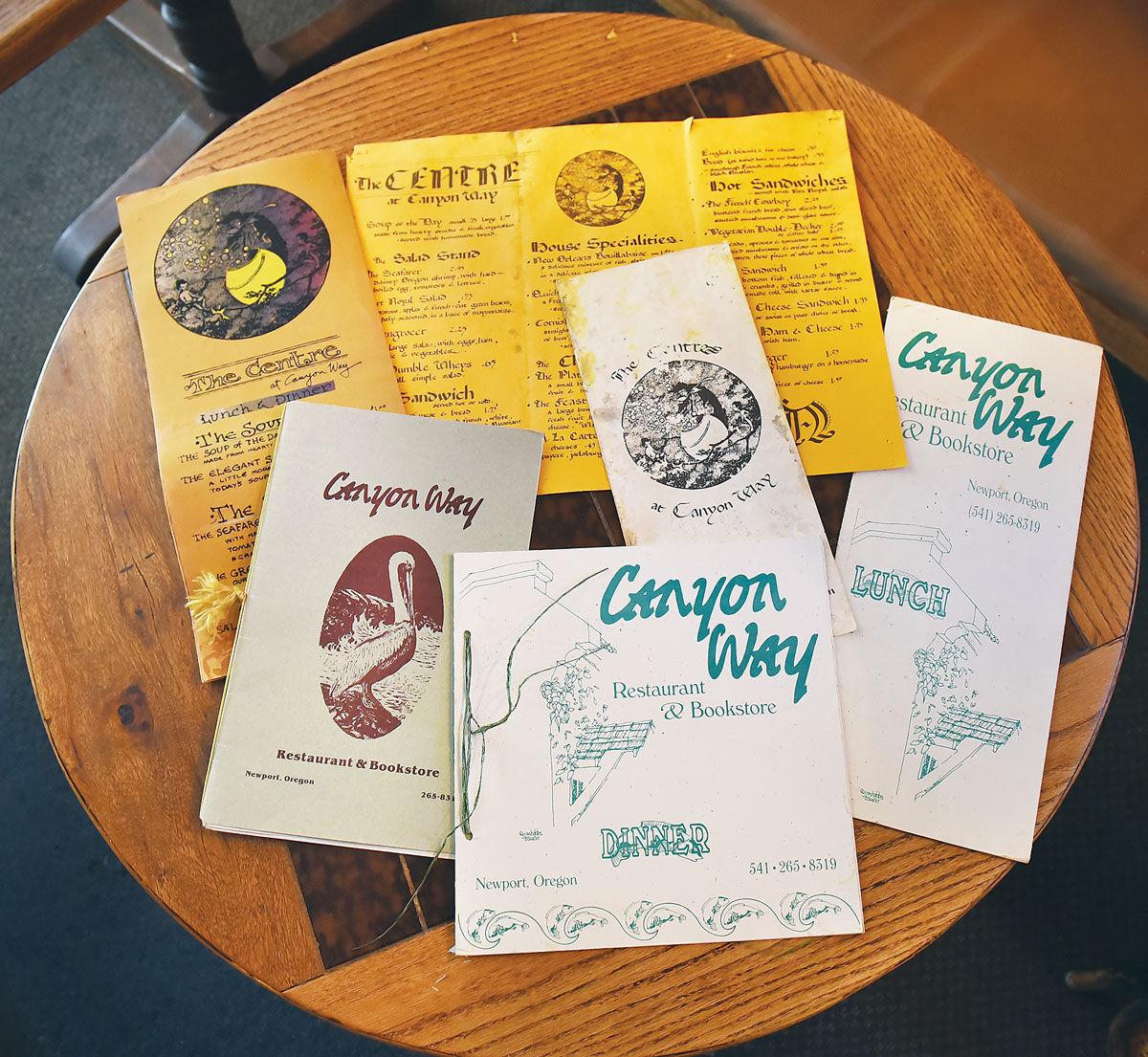 There have been many Canyon Way Restaurant menus created over the years. One of the early ones offered Soup of the Day at 75 cents for a small bowl, or $1 for a large. Most sandwiches on the menu were less than $2, and an espresso went for 35 cents.

Ed and Roguey Doyle, owners of the iconic bookstore, shop and dining spot known as Canyon Way Bookstore and Restaurant, are retiring after 50 years in the business. This photograph was taken in 2017. (Photos by Steve Card)

The shelves at Canyon Way have been emptied of books as the owners sell off the remaining inventory in preparation for retirement.

This photo from 1974 was taken during the remodeling of Canyon Way as it readied to open a restaurant.

I first shopped at Canyon Way in 1972. Ever since then, if I wanted something unique, that was the place to go, especially when it was decorated to the hilt for Christmas.

I often dropped by to get soup or a sandwich to eat at work, and I celebrated many special occasions at Canyon Way’s restaurant. When I moved back to the coast in 2019, I figured I had plenty of time to enjoy the shop and its fine meals once again. Then came the pandemic and now, the building sale. Still, the memories remain.

You could have described Canyon Way as “classic hippie” when it began its 50-year life as a bookstore and then evolved into a local institution.

But this year, Ed and Roguey Doyle, owners of the iconic bookstore, shop and dining spot perched on a hill above the Newport Bayfront, are retiring. And the Canyon Way so many of us know and love — where a CD was always playing, and you could find something different to wear or to eat or to read — will fade into memory.

Longtime patrons call the store closure the end of an era, and the Doyles agree.

Calls from people wanting advice were among the surprises Roguey noted from the past half-century. She said the questioners often asked not just about a book recommendation, but for something unrelated to what the store sold.

“People knew that one of us here would know the answer,” Roguey said. “We were like hairdressers. We spent so much time listening to people. We knew so many people and what was going on in their lives.”

But times changed. These days there is only one distributor for books, and most people buy their books over the Internet. It’s a frustrating situation, Roguey said.

In a 2017 interview with the News-Times, Roguey said “the advent of Internet shopping and the Kindle devastated bookstores. Our book sales dropped 30 percent” the year after the Kindle appeared, and fell another 30 percent the next year. So they created Club 1216 in the front of the bookstore, to provide a home for live music and bring in more customers.

Ed agreed that their closing marks the end of an era, and said Newport has changed since they opened in 1971.

Ed remembers a Newport Bayfront filled with people long past midnight. “Now it’s dead after 8:30 p.m.,” he said. “There were loggers and young hippie fishermen from the dory fleet. Now it’s a little more sterile.”

The Doyles came to Newport like many others in the early ’70s. Ed, who grew up in Chicago, had finished his master’s degree in aquatic biology at the University of Illinois, and he remembered the coast from his freshman year at Oregon State University. He and Roguey, who is from England and still retains her clipped British accent, packed their two children and their belongings in a Volkswagen bus and headed west.

“We started looking up the coast all the way to Astoria for a place where we could settle,” Ed said. “We thought Newport looked pretty nice. The idea was to open a bookstore — Roguey had been working in one — and I thought maybe I could work at the (Hatfield) Marine Science Center. Instead, I got involved with our bookstore, and with building our house.”

The building housing Canyon Way is actually three spaces — three apartments on one side, three more in the area that later housed their restaurant, and a service station garage with a dirt floor in the middle. They were built around 1905, before the Yaquina Bay Bridge. The Doyles’ bookstore started in one small apartment and expanded to include the entire structure over the years.

“Two guys had bought the building and asked if we wanted to lease all of it and turn it into a mini-mall,” Ed recalled. “They gave us a load of cedar and we went ahead with it.” Ed and Roguey bought the entire building in the late 1970s.

Among the small shops tucked away in the nooks and crannies of the buildings was the Beach Plum Bakery, run by the brother of long-time Canyon Way employee Kate Scannell.

“When he left after a couple of years, we ended up buying his equipment and opened a restaurant in the middle of the building, which we called The Centre,” said Ed, who operated the restaurant under its various names, locations and hours from 1973 until it shut for good during the pandemic.

The restaurant originally was open six days a week. A small take-out area at the front of the building was a good place to buy soup and bread and to visit with friends stopping by to shop or eat. Ed was a fixture in the kitchen, while Roguey was behind the counter in the bookstore and gift area.

“We were younger then,” Roguey said. “Once we got going, we had no intention of doing anything else. Ed always wanted to do more and more, and I would say no, but it worked out quite well. It was a good compromise for us. But now we’re too old to keep it going.”

For the first few years, the Doyles’ bookstore just sold books. Then cards were added, and kitchen goods, and clothing and gifts. Live music followed, and at one point, a small stage was built for a Eugene company’s dinner theater production of “A Threepenny Opera.” Local artists showed their work on the restaurant walls.

“We stocked things we liked,” Roguey said. “We didn’t go out of our way to get things related to the ocean or to be alternative. We changed displays often because we had so many repeat customers.”

Throughout the years, the bookstore and gift shop thrived. “We opened in 1971, and when someone closed their shop, we took over that space,” Ed said. “Over 10 years, we went from one room to the whole building.”

“We got to know so many people — young people, elderly, conservative, liberal,” Roguey said. “That’s what I’m going to miss.”

She is proud that her employees remained with her for decades. She said Kate Scannell, who began working in exchange for books at cost, retired as the pandemic hit; she would have worked 50 years this spring.

And now it’s time to move on. “We had a good offer on the building, and we’re more than ready to retire,” Roguey said.

The Doyles don’t have any plans to move away from their Siletz home, where their two daughters grew up and have homes nearby.

What will the Doyles do? Without hesitation Roguey said, “Read and garden. And Ed will read and watch me garden.” She has been working on an English-style perennial and woodland garden for 45 years at their acreage on the Siletz River.

As if it knew what was ahead, the store’s cash register system stopped working July 1, after having problems for the past few years — about the time the Doyles began looking in earnest to sell the building. Their half-price sale of all merchandise has left the shop’s shelves mostly bare, much more quickly than they expected, with predominantly locals stopping by to make a last purchase and to say goodbye. The Doyles’ last official day at work is Aug. 31.

I can see those faces as their younger selves- that's how long I have been going there.