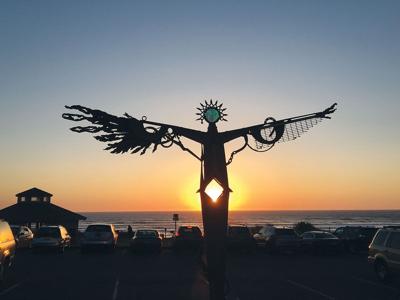 From its spot looking out over the Pacific Ocean, “the Ambassador” has been welcoming visitors to Newport since 2005. But it’s taking a break this summer, in an effort to repair the rust and weathering that have taken a serious toll.

Many who speak of the 21-foot-tall sculpture, crafted by the late metal sculptor and mixed media artist Sam Briseño, eventually use the term “iconic,” and the artwork definitely lives up to its name. Its image appears on a variety of promotional materials for the city, and it’s been a must-see for visitors and residents both. But years of facing off against the ocean have left it a hazard to passers-by, and it was taken down this spring in an effort to save it.

“This is a great sculpture — I’m glad it’s here,” said Peggy Hawker, city recorder and special projects director for the city of Newport. She said there is no record of how much, if anything, it may have cost, but it is expected to take about $5,000 to remove, repair and reinstall it, a sum that includes $600 for new glasswork for its face and body.

Hawker explained that Oregon Coast Council for the Arts (OCCA) placed the statue on city property, with the city responsible for its maintenance. The city’s Public Arts Committee has recommended moving the sculpture back a little from the curb, and the city’s landscaping department has said that could be done, although it also means costs may increase to include a new base. Hawker noted that moving the sculpture does not contradict the Park System Master Plan or any zoning provisions.

“There will have to be an annual maintenance program for the city’s public sculpture,” Hawker said. “Our outdoor art needs to be examined at least once a year.”

Hawker said the city council allocated $25,000, for public art along with a maintenance budget of $10,000; last year, only $5,000 was allocated, and the Ambassador repairs will come out of that sum.

“I give credit to the committee for their efforts at prodding this along and repairing this Newport icon,” she said. “Right now, it was either a matter of repairing it or getting rid of it, and the committee has been instrumental in moving repairs forward.” She added that committee member Bill Posner is documenting the sculpture’s condition and repair in photographs.

“And I’m sure we’ll have a rededication ceremony,” Hawker said. Indeed, Hawker said the city has quite a few murals and other public art that came in during or just before the pandemic and have not had a dedication or formal acceptance.

“We’ll be working on that soon,” she said.

And as for the Ambassador, she said, “It’s been a leap of faith to see about having it fixed, and we’re all hoping for the best. We have high hopes.”

The Ambassador was put “in a perfect place,” in spite of the harsh coastal environment, Hawker added, noting that means it requires a lot of care. She and the committee found it hard to find someone who works in metal and does restoration and repair.

That someone turned out to be Wyatt Glasgow, of Atlas Fabrication in Newport. He took down the Ambassador, ordered parts and brought the sculpture to his workshop — and now awaits arrival of those parts and chemical cleaning supplies. “Getting anything in a timely manner is not happening these days,” he said. “So we’re in a waiting game.”

Glasglow, who was raised in Waldport and has lived in Lincoln County all but one year of his life, has also created metal art, including a large octopus hanging upstairs at Grand Central Pizza in Waldport and an all-steel bear head. He has had his business for a year and a half and has worked in the field six years.

He said the Ambassador project is “right up my alley. Sam clearly had a vision, and it’s cool to be part of keeping it alive. The artist had a collection of various metal parts and used them where they looked good. Many items are so far gone that they can’t be repaired, but overall it’s still in pretty good shape.

“Once I get the parts I need and treat it with a clear coat to help preserve it, I think it will be just great,” Glasgow said. “I’m honored to have been asked to do this, and that the city doesn’t have to ship everything to San Francisco — they can keep the work local. And I’m glad we got it down when we did, as there were major safety issues, parts hanging on like a thread. But the structure is in good shape.”

Catherine Rickbone is retired as executive director of OCCA, and recalled that the Ambassador was already in place when she began her work there. She is currently chairman of the Public Art Committee, and said the group was aware for some time of the deterioration of the statue.

“We’ve been checking on it for about 1-1/2 years, and it became evident that the time was now to restore it,” she said.

While the city hopes the work can be completed this summer, a final date remains unknown. Pavers are likely going to be placed around the base to give a more finished appearance as well. Previously it had no landscaping.

In addition to metalwork restoration, the sculpture’s two glass pieces will also be replaced. Glass artist Teresa Kowalski of South Beach, who fashioned the original glass face, is creating a new green one as well. And while Briseño had repurposed a glass diamond-shaped piece in the body of the work, that has disappeared, and Kowalski is making a new, clear one.

Kowalski recalled that Briseño had talked with then-OCCA executive director Frank Geltner about moving the Ambassador from its original location at the Port of Toledo to Newport.

“This is really all of Sam’s work,” Kowalski said of the Ambassador. “I supplied him with the glass face in trade for a metal stand for a heron, but it really is all his. He was a good friend of mine.”

“The sculpture is so open and joyous and really moving,” she added. “It’s so commanding, yet welcoming – an incredible piece of public art, and one of the most recognizable pieces we have.”