The front entry area at the News-Times has been converted into the COVE — Central Oregon Coast Visitors Experience — a visitor center that is home to an art gallery. That gallery has been named the Lippman Gallery, in memory of Burt Lippman (lower right photo) who was a mentor to News-Times publisher Jeremy Burke. COVE and the Lippman Gallery are open at the News-Times office, 831 NE Avery St., Newport, from 8 a.m. to 4:30 p.m. Mondays through Fridays. (News-Times photos) 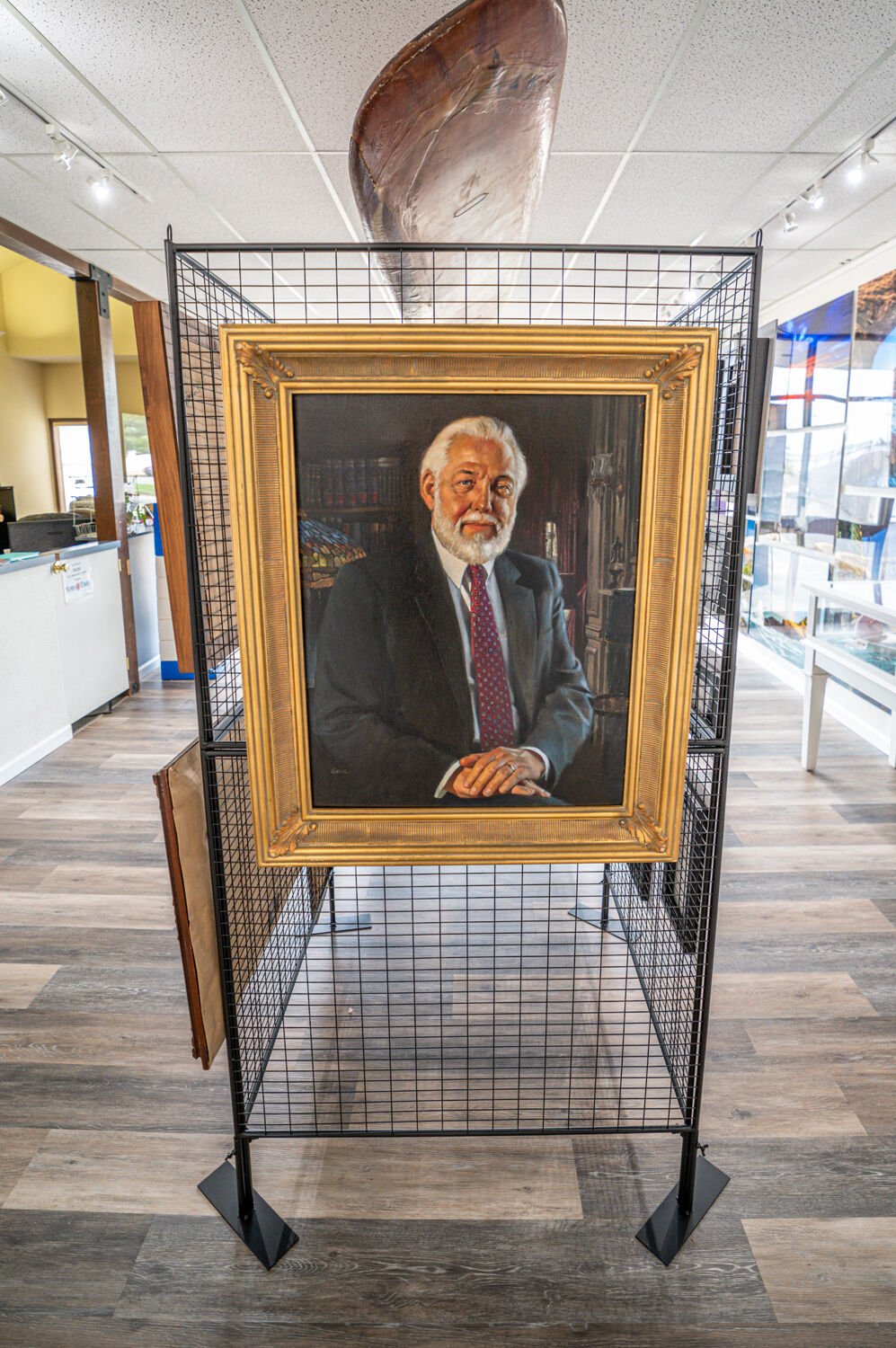 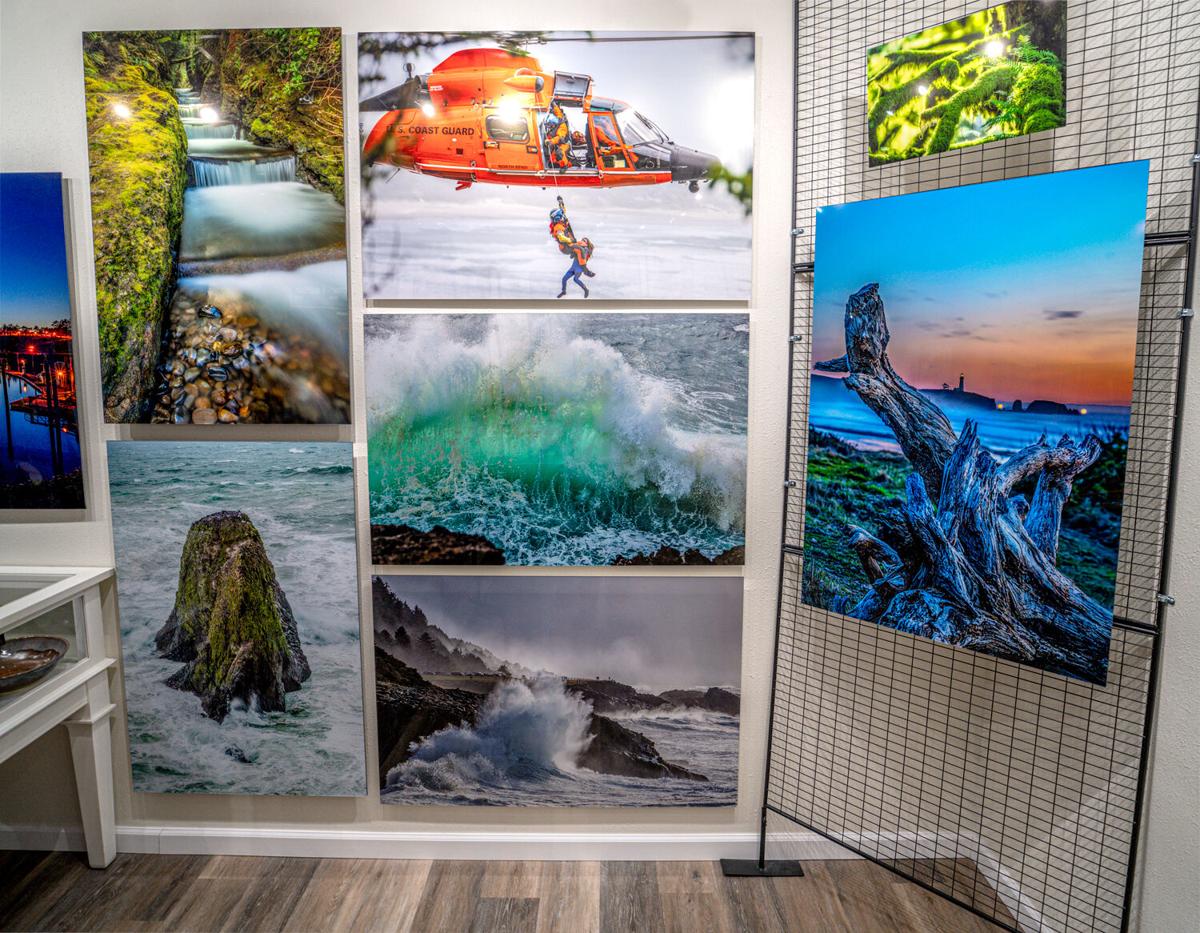 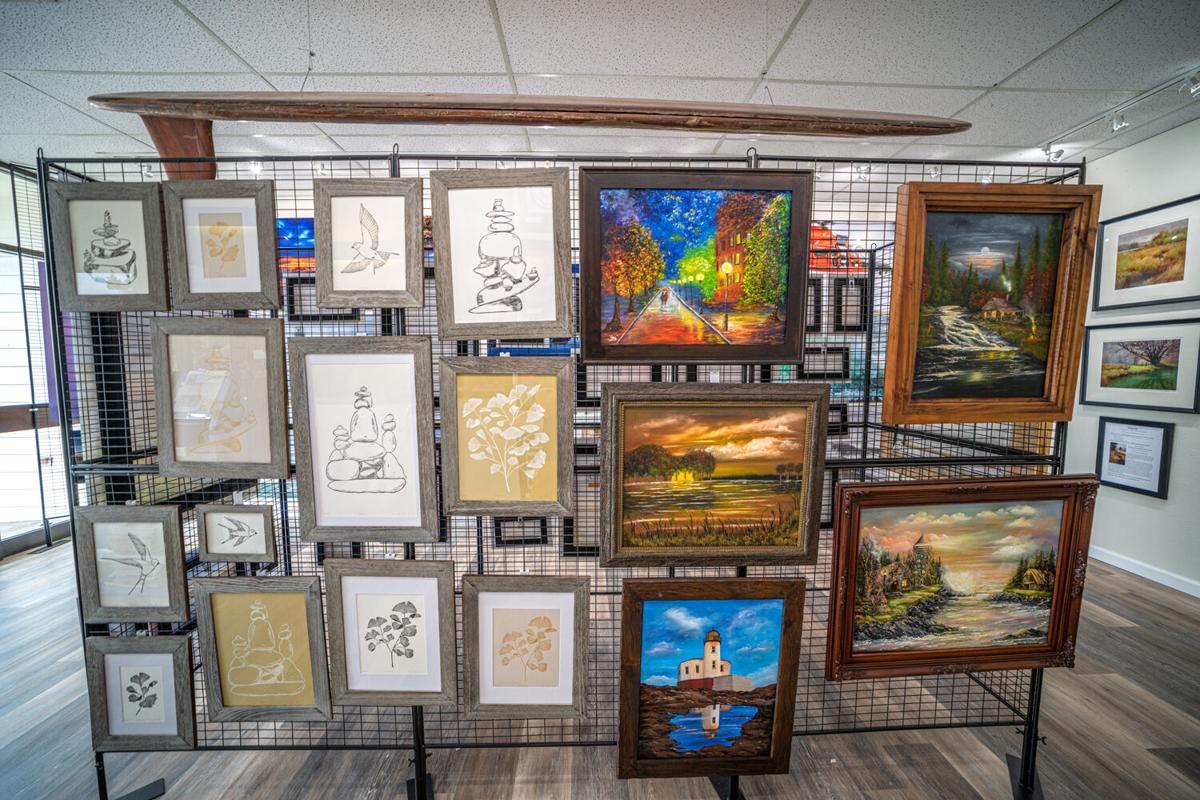 The front entry area at the News-Times has been converted into the COVE — Central Oregon Coast Visitors Experience — a visitor center that is home to an art gallery. That gallery has been named the Lippman Gallery, in memory of Burt Lippman (lower right photo) who was a mentor to News-Times publisher Jeremy Burke. COVE and the Lippman Gallery are open at the News-Times office, 831 NE Avery St., Newport, from 8 a.m. to 4:30 p.m. Mondays through Fridays. (News-Times photos)

Traditionally, a community newspaper office is the place to go to for all kinds of information. The News-Times has taken that a step further by remodeling its front entry area into the COVE — Central Oregon Coast Visitors Experience — a visitor center that is home to an art gallery, named after the man publisher Jeremy Burke considers his mentor.

“This is an opportunity for the paper to give back to the artist community, as well as to do something in Burt Lippman’s memory,” said Burke. “Burt was one of my favorite people ever. And most people don’t know how much he and his wife, Bobbie, have done for this community.”

The gallery and visitor center are Burke’s idea, with the gallery featuring his own photography as well as the work of new and emerging artists of the Oregon coast.

Burke said his goal in converting the front of the office area into a visitor center and art gallery is to visibly meld art and community. “I saw a need for Newport area artists to be able to display their work to the public and to get known,” Burke said. “I wanted a place for the work of up-and-coming artists to be seen. There are so many struggling artists who have no place to hang their art. This is an opportunity for them.

”And I wanted to honor Burt,” he added.

Burke recalled that in 2009, shortly after he first arrived at the News-Times, Lippman took him under his wing.

Lippman died in 2013; his wife, Bobbie, a long-time News-Times columnist, said, of her husband, “Burt had a father-son relationship with Jeremy. He took him to lunch a lot, and Jeremy picked Burt’s business brain. He was like the son Burt never had.”

In addition to hosting art, COVE offers local magazines and brochures highlighting the coastal area, and will sponsor spin-off events. It’s also decorated with coastal memorabilia, including a surfboard.

“The remodeling of the newspaper office is a surprise to visitors,” Burke said. “Most people are shocked when they come into the paper — they think they’re in the wrong place.” A News-Times logo will be placed on the entry door, but Burke said that people soon realize the gallery and visitor center are an integral part of the newspaper, and they like what they see.

“We’re not overly pretentious like some galleries can be,” Burke said. “And we’re not here to sell art. If someone wants to buy a piece of art, they have to talk with the artist. We’re not competing in any way with galleries or businesses.

“I want people’s eyes to pop open with what they see,” he added. “That’s why I have a whole wall of photos, hopefully with something for everybody — waterfalls, lighthouses, bridges. My work is meant to tell the story of the coast. My hope is that by late September, when people come into the paper, they can see 100 pieces of art.”

Burke has been a photographer for about a decade. As newsrooms were downsized and the job of staff photographer disappeared, Burke stepped beyond his publisher duties and helped out by taking photos. He liked what that involved.

“I did it for 15 or 20 hours a week and got better and better at it, figuring out how to do something new,” he said. Now he studies throughout the year with a world-renowned photo editor. And in addition to his full-time job as publisher, Burke continues to shoot coastal photos that frequently appear on the pages of the News-Times.

“I’m extremely serious about my art,” he said. “I can work on one photo for up to 15 hours — not manipulating content but making sure I got everything right.”

The current art on display in the gallery ranges from fish paintings by Leighton Blackwell to oil paintings by Gina Nielsen to carved block prints by Jenny Newell, along with Newport Middle School student art and a wall of Burke’s photographs of coastal scenes. In addition, the gallery currently features work by the late Michael Gibbons of Toledo, whose landscape paintings of the Yaquina River area were the hallmarks of his work.

Display cases house Oregon sunstone jewelry from SJ Custom Jewelry in Nye Beach and items from Wind Drift Gallery and Childish Tendencies from the Bayfront. And Burke is planning to commission both a metal sculpture of sea life for the front of the newspaper building and a mural on the wall facing the highway.

The chance to honor Lippman is important to Burke. “Burt was my sounding board,” he said, calling him a genius businessman. “He was an amazing person. Everyone who knew him absolutely adored him. The first time you met him, he made you feel that you knew him your whole life.”

Bobbie said she and Burt were thrilled to be involved with the local arts community, mostly behind the scenes, when they moved to the coast from southern California. “We helped raise money from the very beginning to build the Newport Performing Arts Center (PAC),” Bobbie said, noting that Alice Silverman, for whom the main theater at the PAC is named, and Burt worked very closely together. They all attended the groundbreaking ceremony.

“This is a link from the newspaper to the community and to the arts, and reinvigorates what we do for the community,” Burke said of COVE and the Lippman Gallery. “It comes full circle, making the paper more visible and more a part of the arts community. After the front page and obituaries, the arts section is the most read part of the newspaper, and it’s super important to what we do.”

Bobbie Lippman said Burt would be honored to have the gallery named after him. “The gallery is very nice, very classy,” she said. “I’m very happy to be part of it.”

She is donating a large portrait of her husband to the gallery as well. Done by John Solie, who painted the portrait of Alice Silverman that hangs at the PAC, the painting has a back story.

Bobbie said Solie, who was living in Seal Rock at the time, asked Burt to pose for a portrait he wanted to paint to advertise his work in Southern-focused magazines. Burt agreed, and the ad proved a success.

“Burt was such a good sport,” Bobbie said. “He’d agree to anything if it was for the good of the order.”

She said Solie eventually gave the portrait to the Lippmans, and now it will have a home in the gallery bearing Burt’s name.

COVE and the Lippman Gallery are open at the News-Times office, 831 NE Avery St., Newport, from 8 a.m. to 4:30 p.m. Mondays through Fridays.